Let me take your question a moment ago and then come to that, Stephanie. Look, I think the arguments about average inflation targeting and so forth, they kind of have their place. But I think we need to recognize when you declare victory. When we’ve got a record labor shortage, the Fed probably shouldn’t be obsessing about making sure there are opportunities available. When we’ve now got average inflation over the last two or three years, up to 2%, we don’t have the problem of needing more inflation in order to get to some kind of level of average. So, I just think we need to recognize the new reality is very different from the secular stagnation reality of two years ago.

At the same time, I think you have to recognize that doing all of those things is going to bear on the inflation process. It’s going to bear on what economists call the natural rate of unemployment. And you’re going to have it have a set of consequences, and you need to factor those in in setting macroeconomic policy.

I mean, we had a moment very much like the current moment, coming after a long period of no inflation. We had a government that had very expansive desires for what it was going to do. We had a progressive tide sweeping through the country, changing attitudes on very many fronts. We had that in the 1960s. And what we saw was that inflation rose more rapidly than anybody anticipated, that a right-wing tide in politics was ushered in with the successive elections with lags of Richard Nixon and Ronald Reagan, and that what happened ultimately did not serve the interests of the progressives who supported it. And you saw a big upsurge with the way in which the United States went off gold and imposed tariffs universally 50 years ago this summer.

It might seem like a choice but it never is. The reality is that the modern protest movement and the new age civil rights movement share many of the same motivations of their progenitors 50 years ago. Arguably today’s vintage is less violent than in other generations, because they have additional tools like social media where they have the opportunity to vent their frustrations.

Messages travel faster and are more amplified in today’s world than was ever the case before. That is no less a revolution than in ages past. It is occurring at a different pace and is transpiring online but is equally real.

The choice between tighten to contain inflation but impose hardship on a restive population is no choice at all. The mob needs to learn by experience that printing money to fix every problem is a false narrative. Concurrently lack of evidence to date that printing money leads to bad outcomes only increases calls to be bolder and persistent in supplying it.

Outsized benefits, that are extended, justified, rationalized and skimmed over are the equivalent of universal basic income. Creating entitlement with no requirement for gainful activity is a recipe for devaluing all labour and therefore boosting the costs of employing anyone. 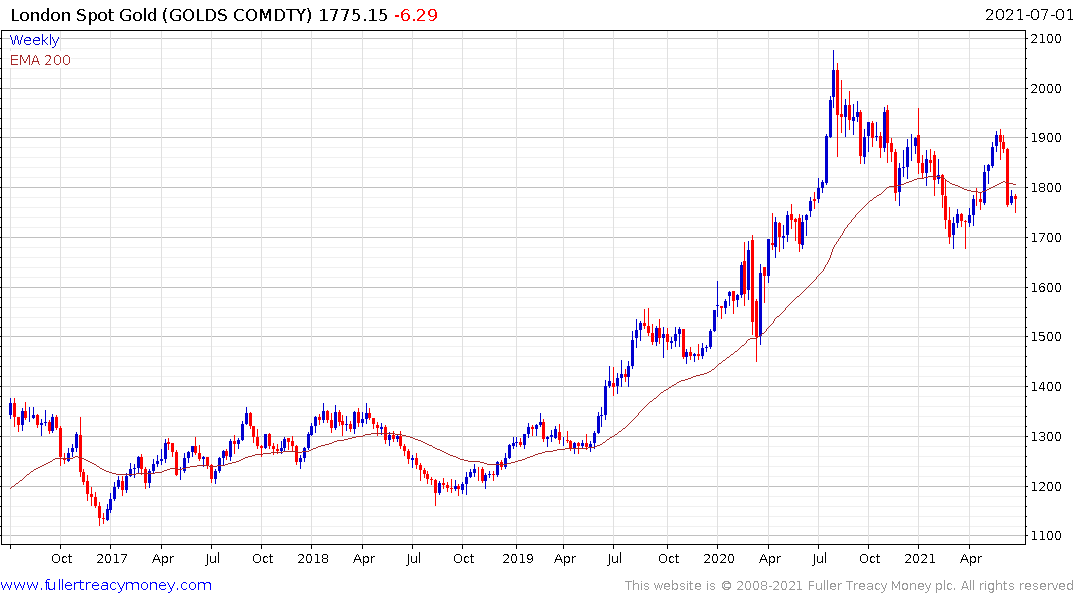 Gold is an obvious hedge against the intentional devaluation of fiat currencies. 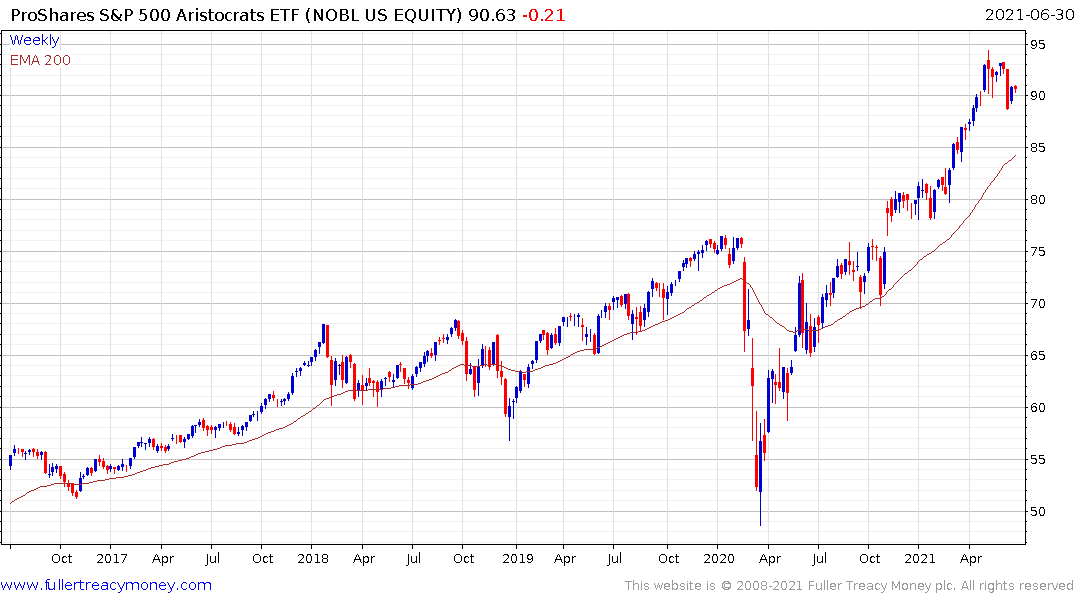 The S&P500 Dividend Aristocrats have survived multiple cycles by pursuing dominance of their respective niches and focusing on strong balance sheets. The ETF remains in a steep but reasonably consistent uptrend and break below the low near $88 would be required to check momentum.