Second point I would make is that the usage of fiscal and monetary policy to bridge to the other side of this epidemic has been pretty extraordinary and beyond anything I’ve ever seen, certainly, in the investment universe. I would say generally well-designed, flexible, more than adequate, in order to minimize social and economic disruption. And you think about the backdrop of when you pull monetary and fiscal together, not just in the US, but globally—I mean, you pressed into the system immense amounts of liquidity. But just to put a couple of these numbers in the backdrop into perspective, today versus 20 years ago—20 years ago there was less than $3 trillion of liquidity in the system—in dollar equivalents, 6% of GDP. It’s now $40 trillion or just under 50% of GDP.

Capital is both global and mobile, so it flows to the most attractive assets wherever they may reside. With liquidity representing 50% of global GDP there is a clear incentive to invest in capital intensive industries that will bear fruit long into the future.

It is no coincidence that some of the biggest success stories of the last decade have been the businesses that grasped the opportunity represented by massive liquidity infusions and bet everything on achieving capital intensive global scale. Building out a global network of data centres, a supply chain of warehouses larger than the postal service and UPS combined by orders of magnitude, battery giga-factories and reusable rockets were all possible because of these massive liquidity infusions.

The plans currently circulating for a hydrogen economy, small modular reactors, nuclear fusion, infrastructure building and revitalization, hypersonic travel, colonizing Mars, continued expansion of wind and solar installations are dependent on the availability of credit persisting indefinitely. That’s before we begin to think about the pipeline of companies emerging from the private equity funded sector trading on the promise of future cashflows. Rivian’s record breaking pre-revenue IPO this week is a clear example of that trend. https://www.smartcitiesworld.net/opinions/think-tank-city-life-on-mars-creating-human-centred-communities-in-space-and-beyond 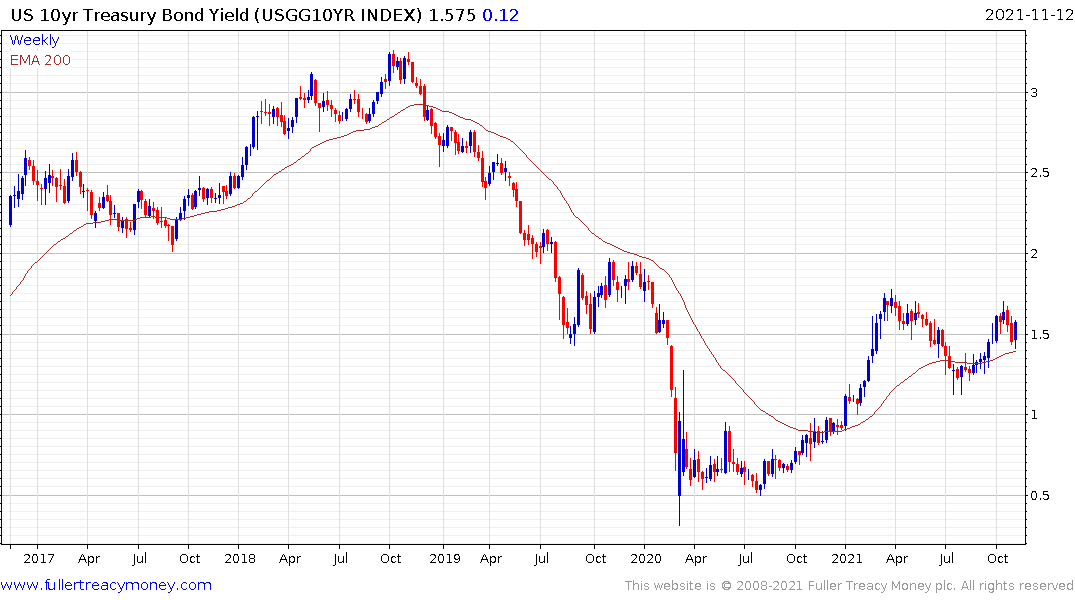 The big question is how far can bond yields rise before central banks are forced to act. This is particularly relevant for the USA because the duration of outstanding debt is so short. 10-year yields rebounded in emphatic form from the region of the trend mean this week. Any interest rate hikes this is pricing in are likely to significantly lag inflationary pressures for the foreseeable future because the debt burden is so large. That’s the only conclusion that rationalizes the enthusiasm for pre-revenue speculation. We remain in a financially repressed world.