He took the first step in an investor call Friday, when said there would be no changes to the fiscal framework for Africa’s most industrialized economy. The rand gained and bond yields fell after he spoke.

“I don’t see much changing in that fiscal framework,” Godongwana said on the call. “There is commitment from myself as the minister of finance and I would imagine from government.”

Europe adopted fiscal austerity after the global financial crisis and its sovereign wealth crisis. The result was the surge in populism and widespread disaffection with the European project. On this occasion they have resolved not to make that mistake again. In fact, it could be argued the pandemic has been the perfect excuse to ditch the failed austerity program.

South Africa, and particularly Mexico, are not spending to the same extent as other countries. In fact, it seems like they are among the only countries to have found a new respect for fiscal conservativism. In South Africa’s case, they probably don’t have much choice. The country has often been referred to as a member of the fragile 5 (Brazil, India, Indonesia, South Africa, and Turkey) so they may be concerned with the repercussions for borrowing costs if fiscal probity is abandoned and not least following recent internal disturbances. 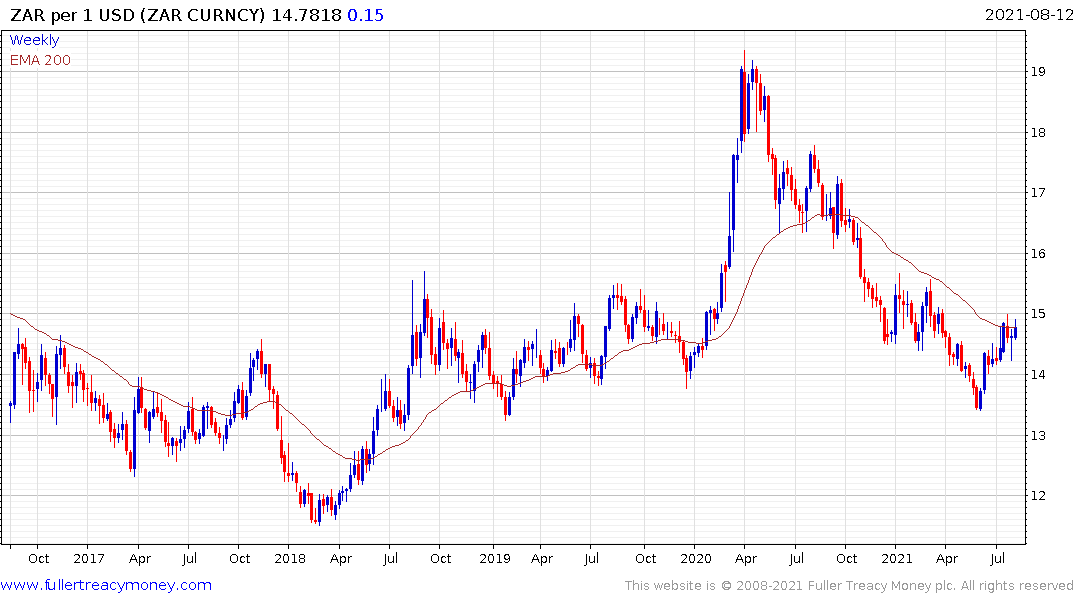 The Rand reverted back towards the mean over the last three months and is currently pausing. 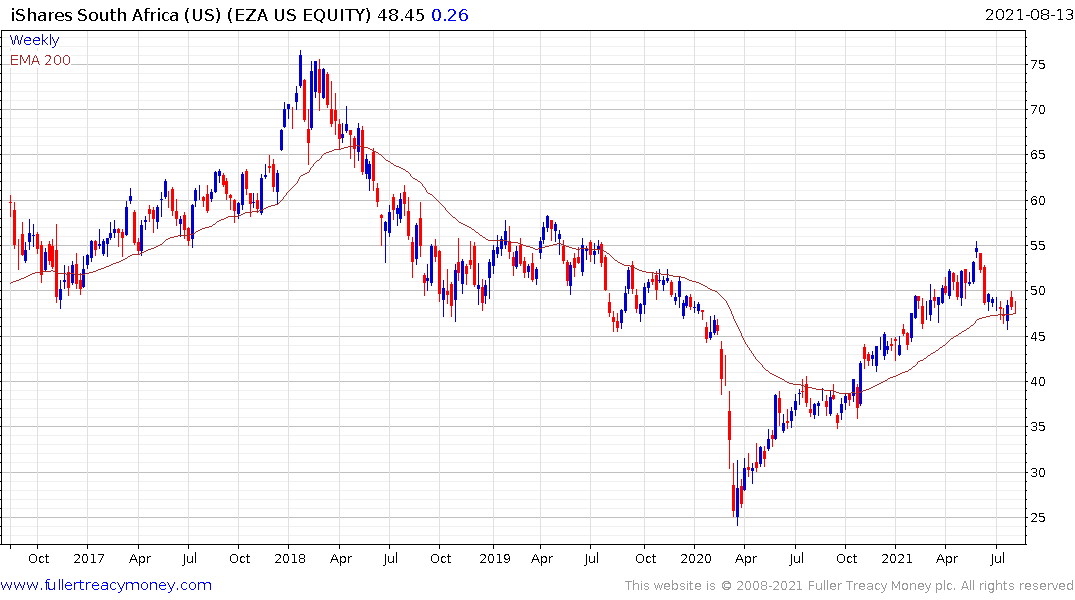 The iShares MSCI South Africa ETF is also pausing at present in the region of the trend mean. It stands to reason international investors are willing to continue to support the stock market, provided they have the possibility of currency market appreciation.

Mexico has been particularly parsimonious with its fiscal stimulus. That has helped to support the Peso and it is on the cusp of breaking out. This quote from Mexico central bank chief Diaz de Leon spell out their mindset “We are mindful of inflation dynamics” and “We know that they are transitory in nature, but Covid has been a crisis like no other, with peculiarities like no other, so we need to be cautious. That’s why we want to run a prudent monetary stance.”

Respect for the threat inflation represents comes from personal experience of what it means. That’s been a constant challenge for many emerging markets over the years and faced with the uncertainty of how long the drag from the coronavirus will be they are erring on the side of caution. That’s something every country should be considering as one variant after another sweeps through. 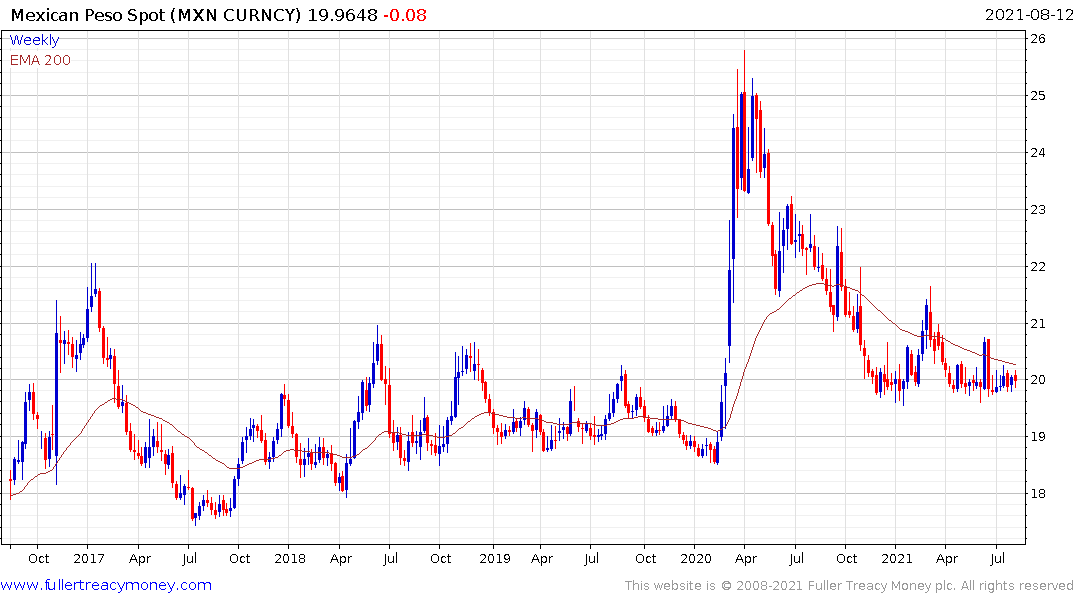 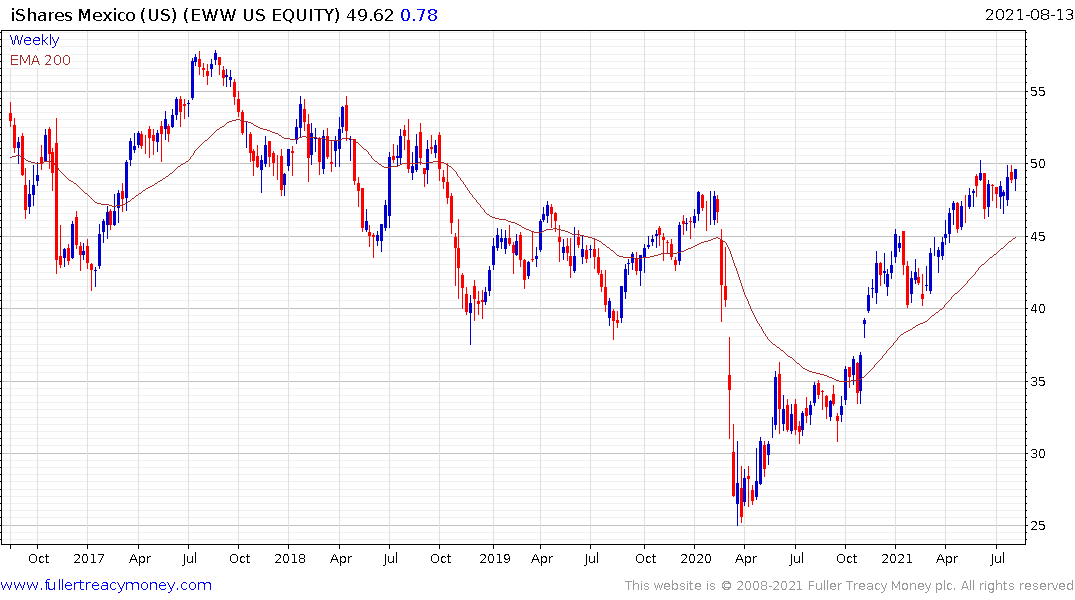 The iShares MSCI Mexico ETF is on the cusp of breaking out and so is the Mexican Peso. It’s another example of an emerging market where currency market appreciation is demanded by investors before they will support stocks.