Finally we come to the least valued US large bank, Citigroup (NYSE:C), which currently trades at 0.80x book on a beta of 1.6.  C has an “A” bank stress index rating from Total Bank Solutions.  Like JPM, C’s business model puts equal emphasis on lending, trading and investing activities, resulting in a lower RAROC at 1% vs a nominal equity return of a bit shy of 7%.

Keep in mind that C has lower asset returns and higher credit costs than other large banks, begging the question as to whether the Fed should really be allowing the bank to increase payouts to equity investors.  If you look at Page 3 of C’s Y-9 performance report, you’ll see that C’s yield on loans is 2% higher than the large bank peer group, yet the bank has a spread on earning assets half a point lower than other large banks. The Street has C’s revenue down in Q2 2017 but magically up 1.5% for the full year.  Earnings are also expected to be down this quarter, but then will rise an astounding 9.5% for the full year.  Despite the market bump following the release of the stress test results, which will result in returning more capital to investors than C actually earns in profits, like BAC the C common still trades at a discount to book.

Unlike names like JPM, C does not have a significant asset management business and also announced an exit from residential mortgage origination and servicing earlier this year.  This may turn out to be a blessing in disguise.  C is up 58% over the past twelve months vs 13% for the S&P 500, so like JPM we’d say that the risk is on the downside for this much maligned stock.

Will C hit its revenue and earnings numbers for Q2 2017?  Probably, especially now that they’ve jettisoned the mortgage business.   But the larger question is why does C still exist?  In the wake of the 2008 financial crisis, C has been struggling to redefine itself in a way that makes sense to investors.

But having sold the asset management business to Morgan Stanley (NYSE:MS) and the mortgage business to New Residential (NYSE:NRZ) and Cenlar FSB, there is not much left besides the consumer lending book and the payments business.  As we’ve noted in previous comments, C’s board ought to consider selling the payments business for a premium price, spin the proceeds to shareholders, then dispose of the other assets for whatever they can get before turning off the lights.

Consumer lending and credit cards is not a bad market to be in considering the relative performance of companies like PayPal and Visa relative to traditional banking. With the steady march of online retail and instant gratification consumer credit remains a growth market.

Of course, that does nothing to change the cyclical nature of the banking sector when higher rates eventually tip the economy into a recession. However in the early stages of a tightening cycle higher rates boost margins. 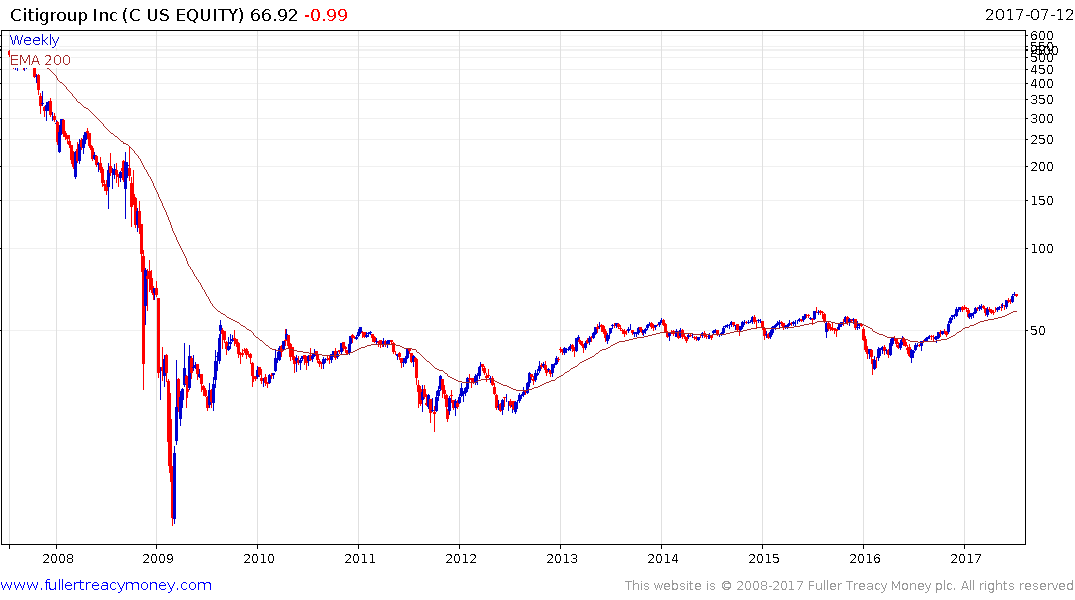 Citigroup broke up out of an eight-year base in June and a break in the progression of higher reaction lows would be required to question medium-term scope for additional upside. 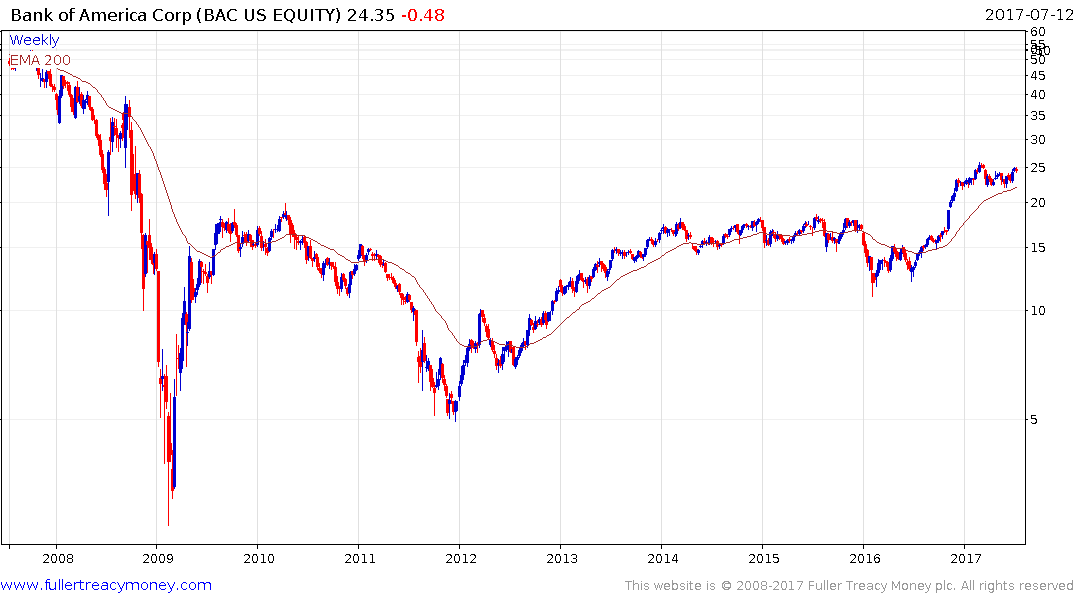 Bank of America broke successfully above $20 in November and has been consolidating in a first step above the base since.