Private markets come of age
Comment of the Day

Private credit. Private credit fundraising softened in 2018 (down 15 percent versus 2017), but its long-term growth trend remains intact. In fact, 2018 was the second-highest fundraising year in history for the asset class (Exhibit 5). Seven-year trailing fundraising has grown at an average of 9 percent per annum since 2013, outpacing both PE and closed-end real estate growth, on the back of sustained low interest rates and a long economic expansion. Annual returns for private debt have averaged around 10 percent since 2008, with higher yields than are available in public debt. This has been an attractive proposition to more and more investors. A good indication is high-yield spreads, which reached ten-year lows in 2018 before widening again in the fourth quarter.

Private credit funds (and hedge funds, which are not included in our data) are now filling a financing void for many middle-market and sponsor-owned companies, helping sectors and providing security structures avoided by banks. Private credit has also increasingly returned to covenant-light lending as the market has grown hotter: in a recent survey by the Alternative Credit Council, 38 percent of North American private credit lenders reported lower financial covenants in the past year, versus just 8 percent reporting higher covenants.

There are obvious merits to investing in privately held companies. For one thing the reporting requirements are considerably less onerous but there is also cashflow and the ability to invest in growth at an earlier stage; thereby catching more of the base effect as businesses expand. The flip side is these advantages are well understood and the desire to capture yield has reduced returns and driven up prices. 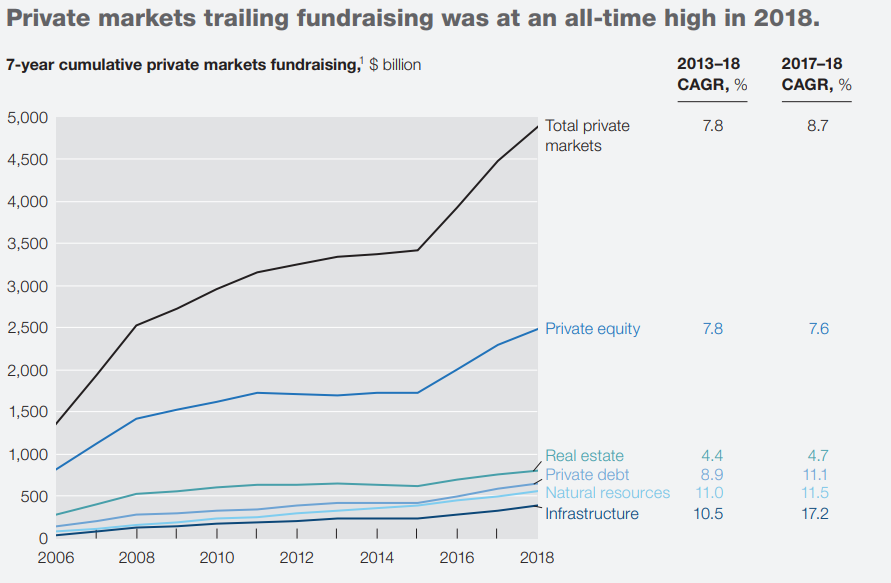 This chart from the above report caught my attention. Since 2006, $5 trillion had been invested in private markets. That’s a lot of money chasing a limited number of assets. Of course, the number of assets on offer and responded to demand and we have seen some large reasonably successful companies emerge as a result of this investment. The problem is many companies waited too long to IPO and have the best of their growth behind them rather than ahead. That’s not a particularly attractive investment proposition.

The Indxx Private Credit Index which is composed of listed private equity companies has been confined to a range, in the region of its all-time peaks, for most of this year. The 1100 area will need to hold if top formation completion is to be avoided.