Adjusted for inflation and annualized, costs are already higher now than for almost anytime in the past six decades, according FAO data. Indeed, it’s now harder to afford food than it was during the 2011 protests in the Middle East that led to the overthrow of leaders in Tunisia, Libya and Egypt, said Alastair Smith, senior teaching fellow in global sustainable development at Warwick University in the U.K.

“Food is more expensive today than it has been for the vast majority of modern recorded history,” he said.

It is interesting to contrast the charts of Food and Agriculture World Prices disseminated by the UN with how the commodity sector as a whole has performed. 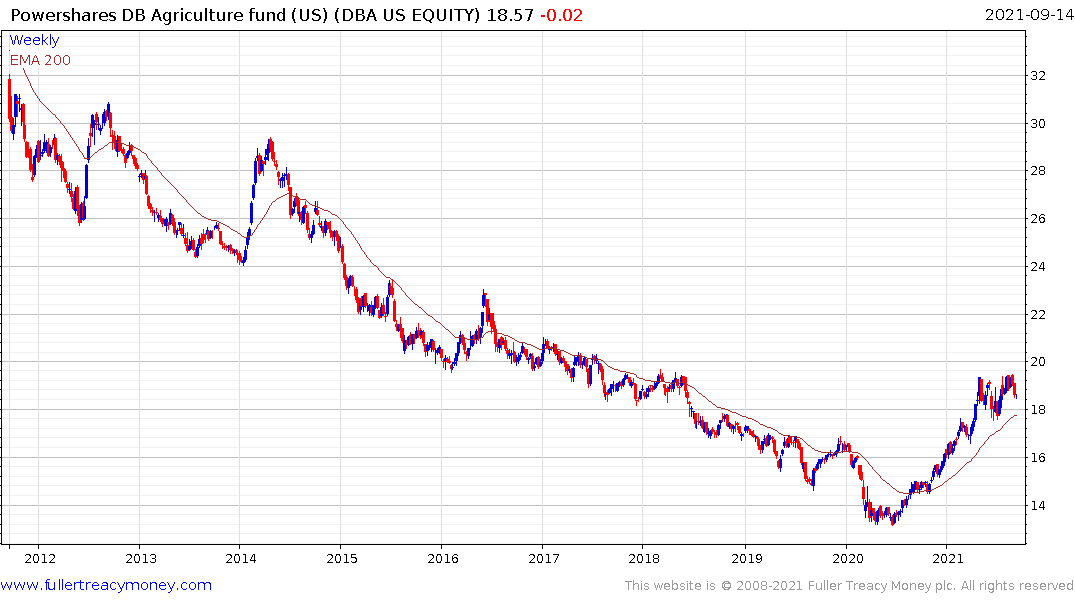 The UN version is close to the upper side of a more than decade long range while commodity prices are only now breaking out. The difference in the two charts may be a result of how contangos create steps in futures continuation charts. The alternative rationale is futures prices do not accurately capture the prices paid by consumers for food. Transportation costs, export and import taxes, commissions and mark-ups all contribute to the discrepancy.

The seeds for price volatility were sown when the IMO 2020 ship emissions rates were introduced. Today we are dealing with increasing demand for seaborne freight and fewer ships. That would have created supply challenges without the additional hurdle of the pandemic or weather events that have conspired to impact yields. The continued rallied in oil prices is an additional push factor in the price of food commodities. 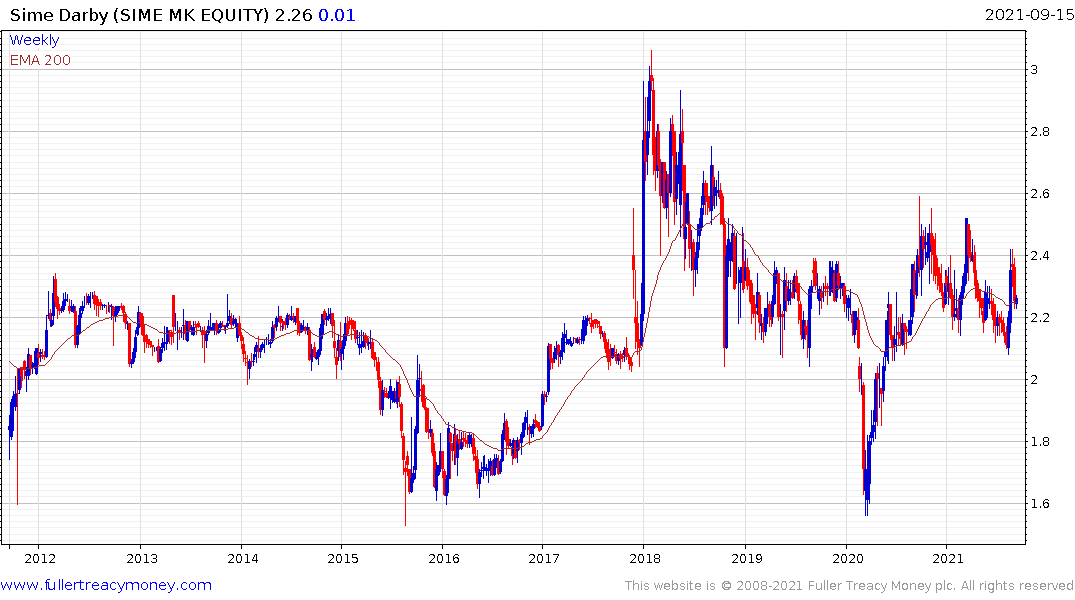 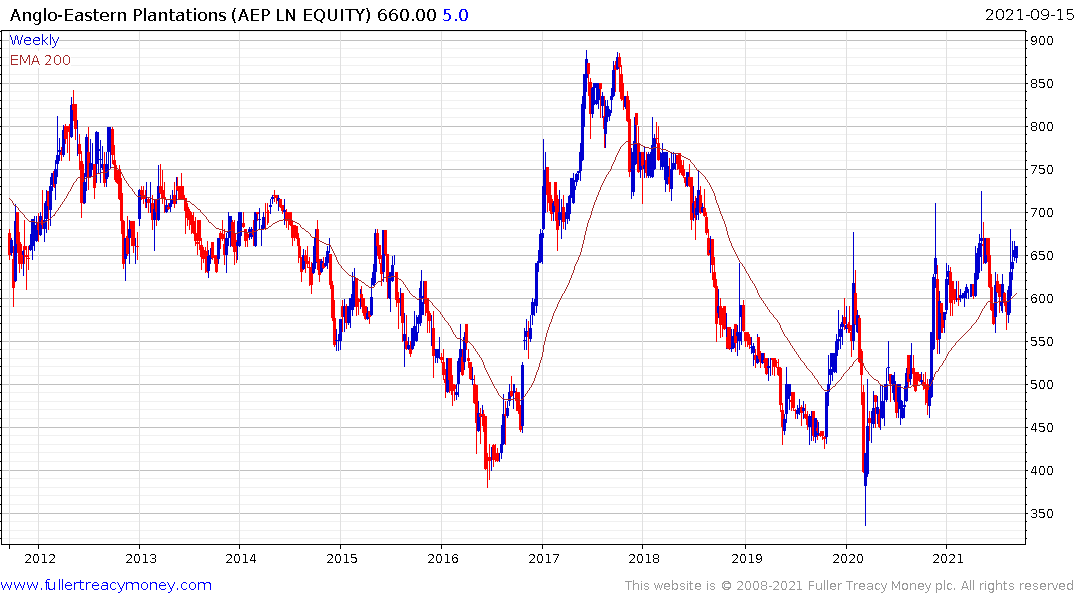 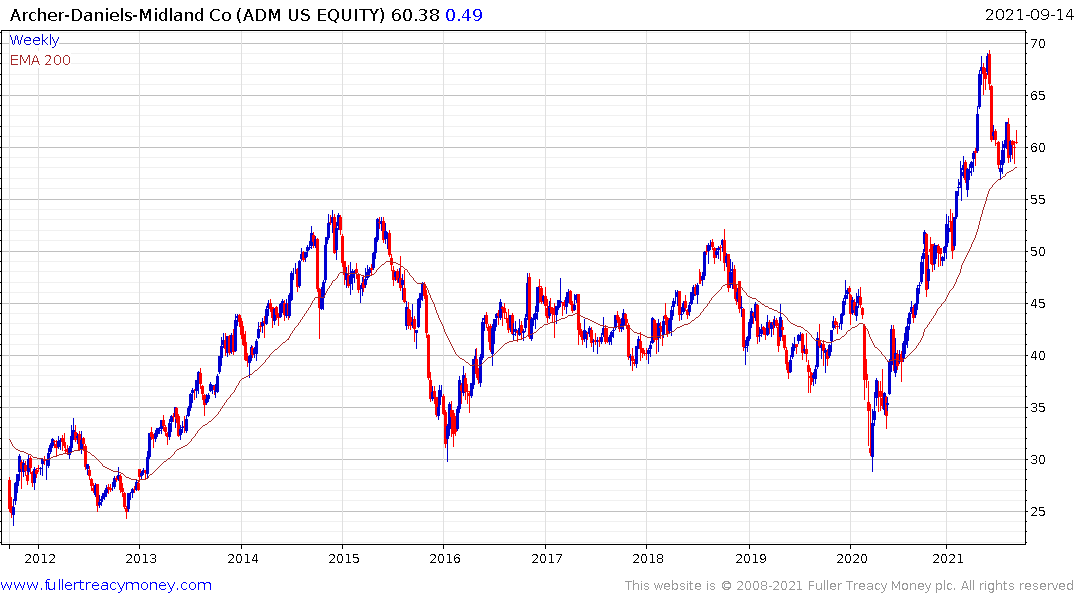 Stocks like Sime Darby Berhad in Malaysia, the UK’s Anglo-East Plantations, the USA’s Archer Daniels Midland all did well during the last big commodity boom and are the firming at present. 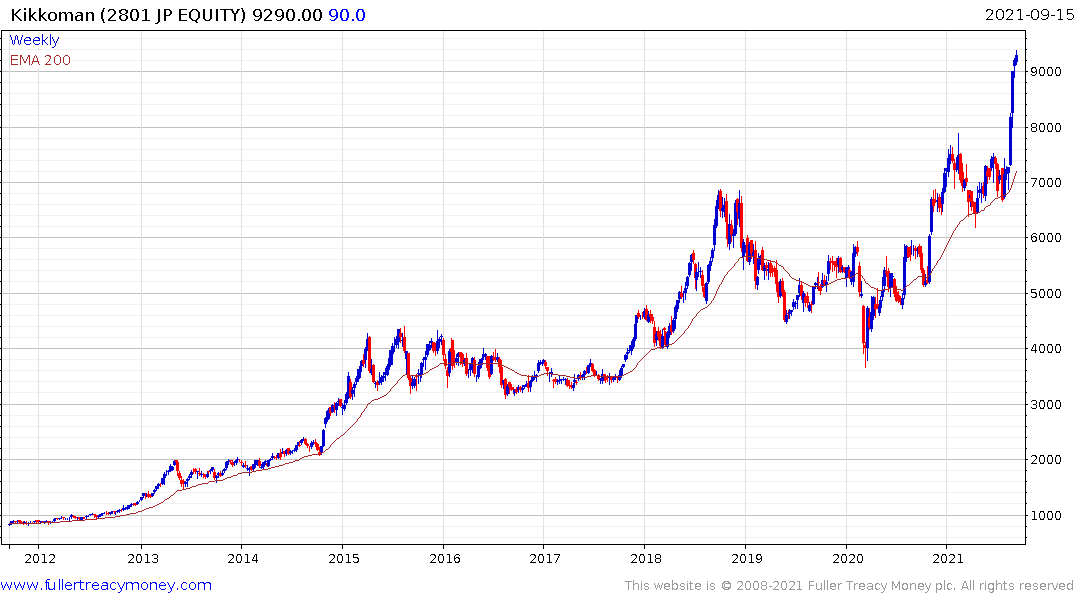 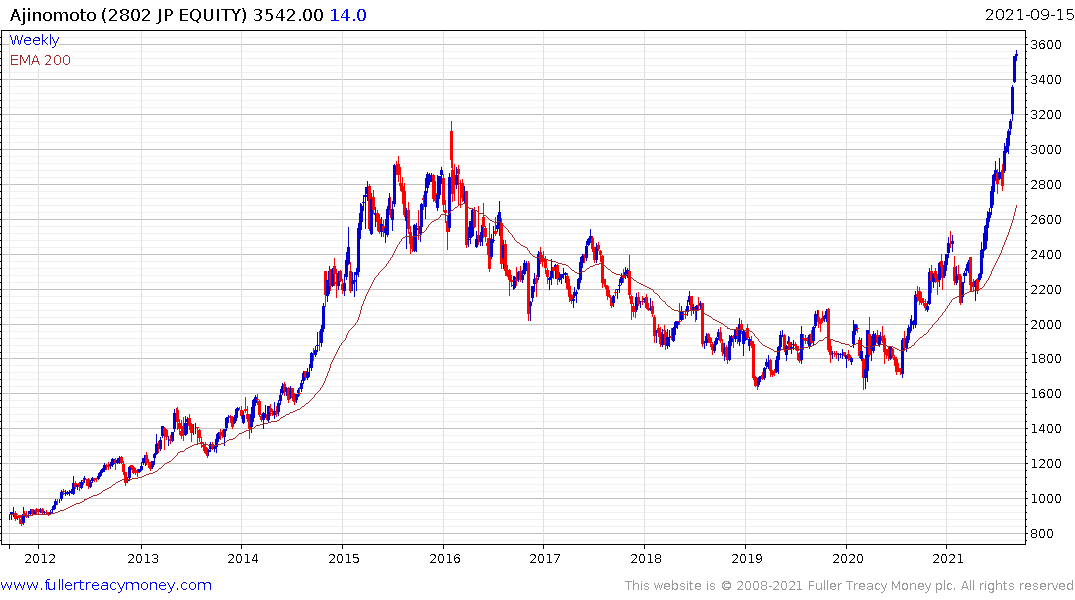 A significant number of Japanese food companies are performing well and in clear recovery modes. Kikkoman and Ajinomoto have accelerated of late and are susceptible to some consolidation. 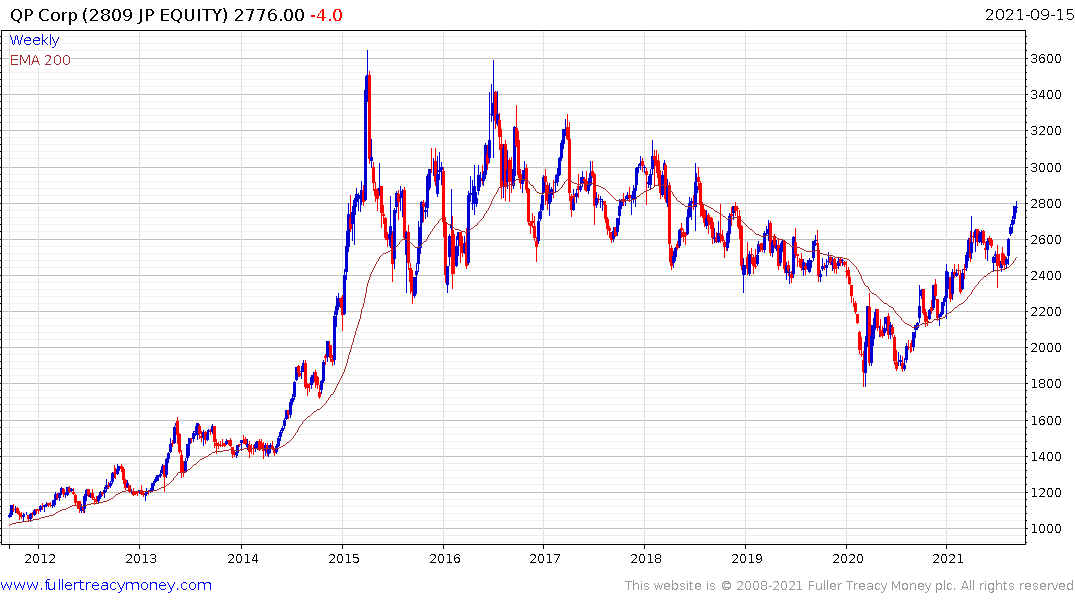 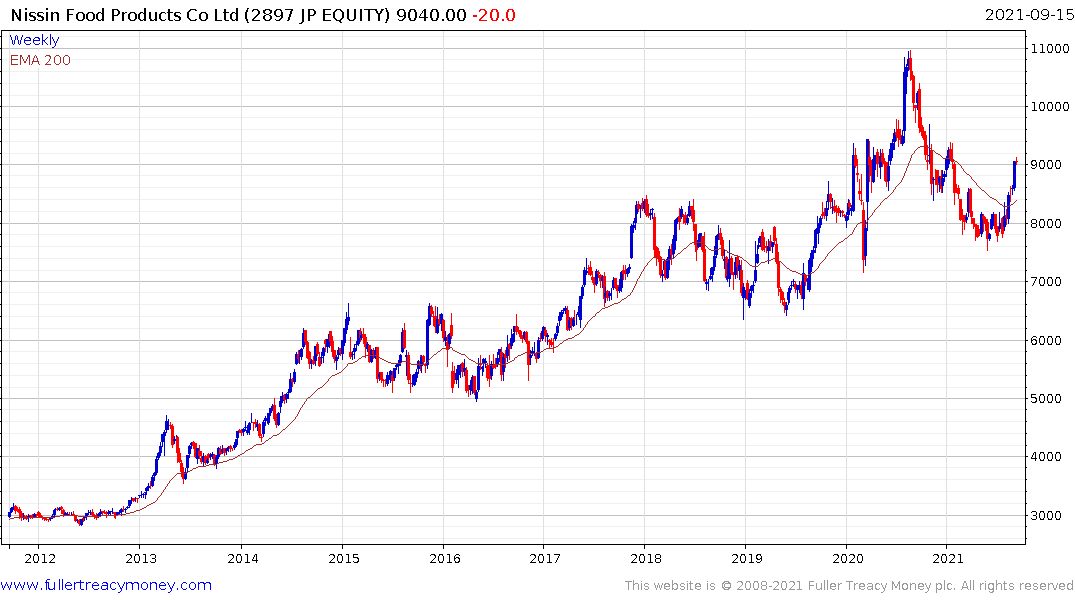 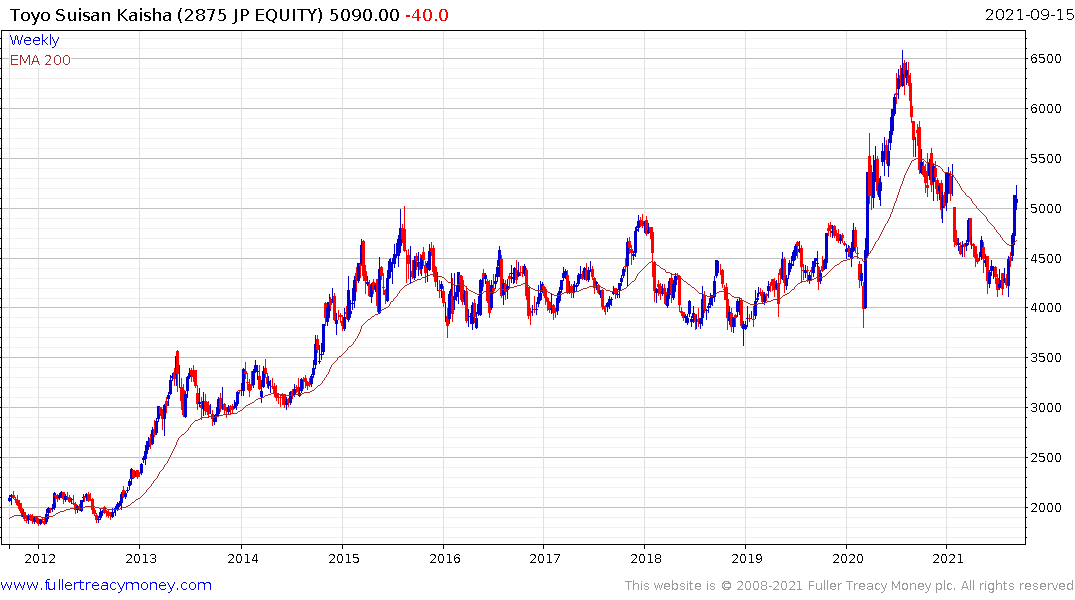 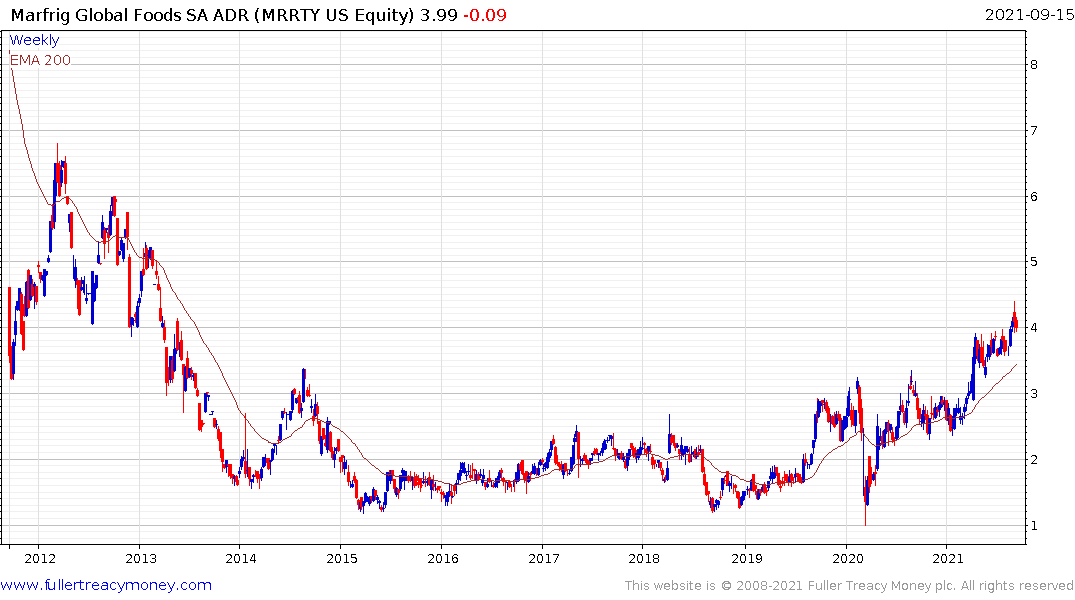 Brazil’s Marfrig is trading at an Estimated P/E of 4.64 and yields 6.59% following the reintroduction of dividends earlier this year. The ADR has completed its base formation.