Precious Metals: Easy come's "But for how long will easy stay"
Comment of the Day

Precious Metals: Easy come's "But for how long will easy stay" by Eoin Treacy

Irrespective of gold price outlook uncertainties, we think gold equities are well-positioned financially. Valuation looks fair at lower prices, and should higher prices continue, windfall gains have the potential to be extended. At spot gold, our coverage trades at a 2021/22E FCF/EV of 6.2%/6.4% and EV/EBITDA of 7.3x/7.1x (vs. S&P500 valuation of 4.0%/4.5% and 14.3x/13.1x). Utilizing our mid-cycle pricing assumption of $1,500/oz, sector valuation represents a 2021 FCF/EV of 3.1% and EV/EBITDA of 10.4x. We continue to highlight (1) higher gold prices have de-levered sector balance sheets fully, supporting the ability for producers to withstand price volatility, (2) free cash flow remains robust and budgeting is based upon significantly more conservative prices than the current environment, (3) historically-concerning past pro-cyclical behaviors are largely absent, and (4) return of capital remains a growing focus, with dividends now competitive to the S&P and supported down to ~$1,350/oz. Short term, we see some risks heading into 2021 guidance and year-end reserves as the effect of COVID-19 has deferred capital, re-sequenced production, and reduced exploration, but this is reflected in our estimates.

Most major miners are now very reluctant to embark on ambitious exploration and development programs. They have been punished by the markets for doing so for over the decade and are often described as capital destroyers. Instead, they have concentrated on M&A activity, where they have security of production already underway and at least partial visibility about the extent of the resource base.

That is creating a relationship similar to what we see between major pharmaceuticals and biotechnology firms. Some biotech companies eventually make it big on their own. However, the majority are interested in a near-term payday. They pioneer a new treatment, get it to human trials and sell to a larger company. That has created an ecosystem of inventiveness because the route to a payday is relatively clear.

Innovation in satellite imaging, geophysics, and mining methodology is pioneering new forms of exploration. Low interest rates and the surety that large companies will invest in proofed-up ore bodies should drive investment in new exploration. Meanwhile, there is also significant innovation ongoing in how tailings are processed. This article from Omnibus Capital may be of interest. 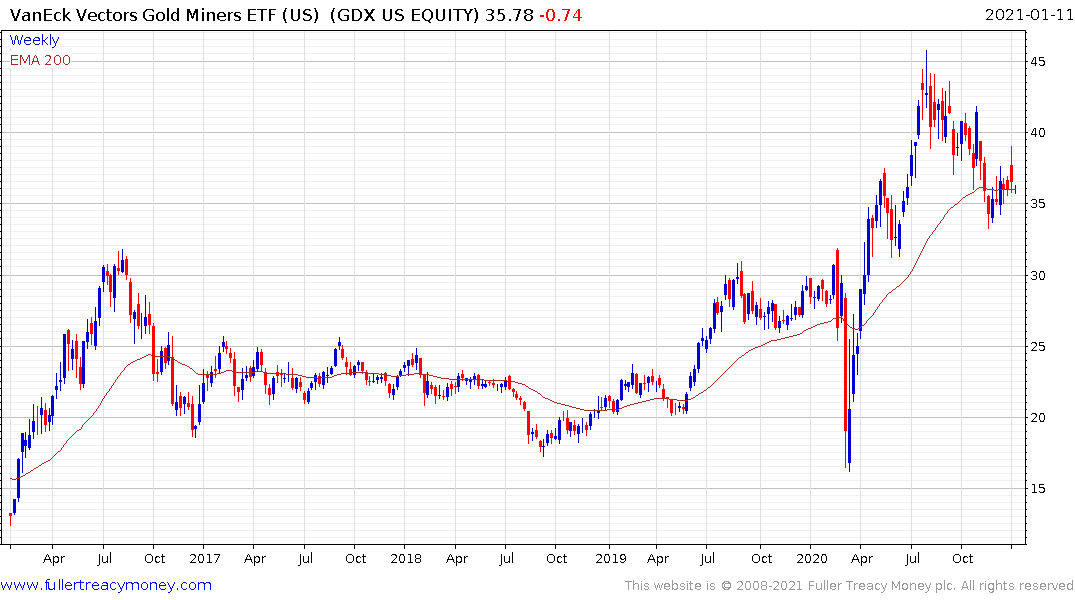 We remain in a supply inelasticity meets rising demand environment for gold and many of the industrial resources. The VanEck Ventures Gold Miners ETF is back in the region of the lows from late November and will need to sustain a move above $40 to confirm a return to demand dominance beyond short-term steadying.