Powell carefully explained the reasons why the policy committee has shifted its views this year, and noted that “crosscurrents have reemerged, creating greater uncertainty.” Despite a current trade war truce with China, he continued to stress downside risks to the outlook.

“Uncertainties about the outlook have increased in recent months,” Powell said in the text of his remarks. “Economic momentum appears to have slowed in some major foreign economies, and that weakness could affect the U.S. economy. Moreover, a number of government policy issues have yet to be resolved, including trade developments, the federal debt ceiling, and Brexit.”

He noted that policy makers are carefully monitoring developments including the risk that weak readings on inflation could be “even more persistent than we currently anticipate.”

In addition, Powell pointed to a slowdown in business investment, decelerating global growth, and declines in housing investment and manufacturing output.

“It strongly suggests they’re going to be inclined to ease at the meeting later this month,” Michael Feroli, chief U.S. economist at JPMorgan Chase & Co., said in a Bloomberg Television interview. “He continued to highlight the uncertainties that are weighing on the outlook rather than highlighting the better jobs report.”

The Fed has been saying for a decade that they are going to be data dependent. However, that leaves a lot of leeway over what kind of data they will be swayed by. This graphic of the rate at which people are voluntarily quitting their jobs overlaid with the Fed Funds Rate suggests the domestic US consumer is confident about the economy but the Fed is still getting ready to cut rates. 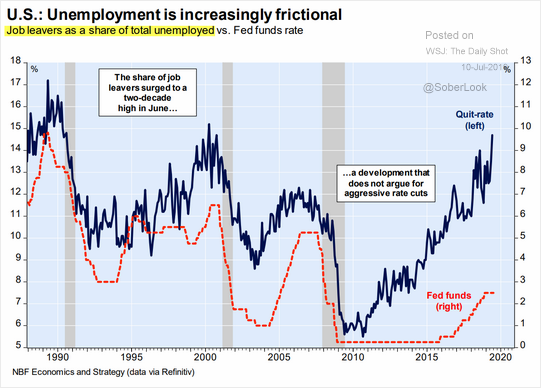 The concerns being voiced about the global economy is an acceptance that the Dollar is too strong. Quantitative tightening restricted the quantity of Dollars in circulation and removed liquidity from the global economy. Therefore, this interest rate cut is a precautionary measure to both assist the US economy but perhaps more importantly to add liquidity to the global economy in the form of lower rates and a weaker Dollar.

That comes at a cost and the clear risk now is that by providing assistance to the global economy the Fed is inflating a bubble at home. 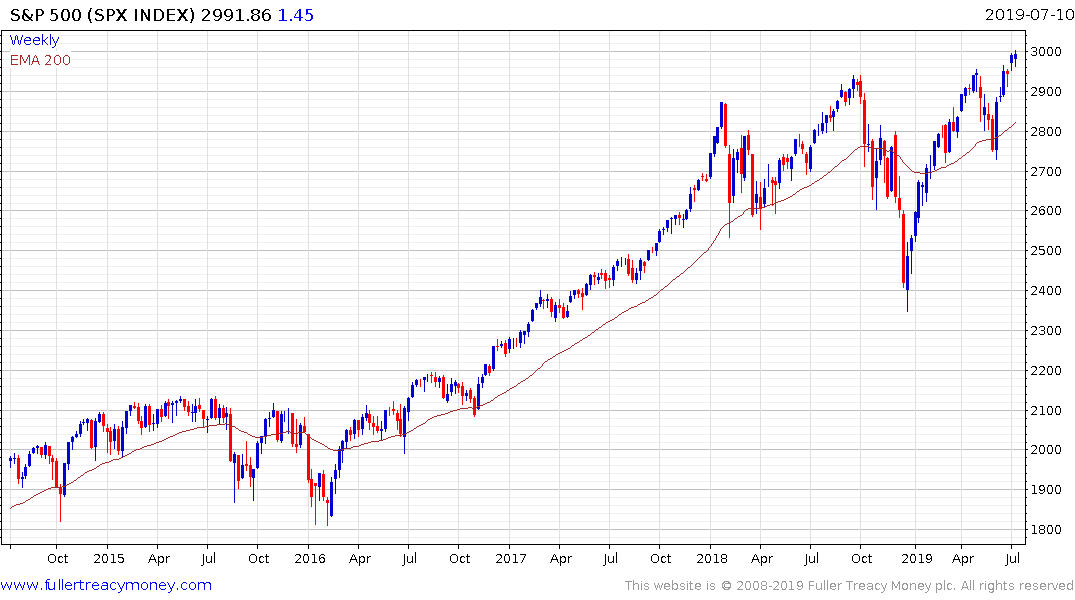 The S&P500 traded above 3000 for the first time today. It did not quite hold the move but as long as it continues to trade above the trend mean the benefit of the doubt can be given to the upside. 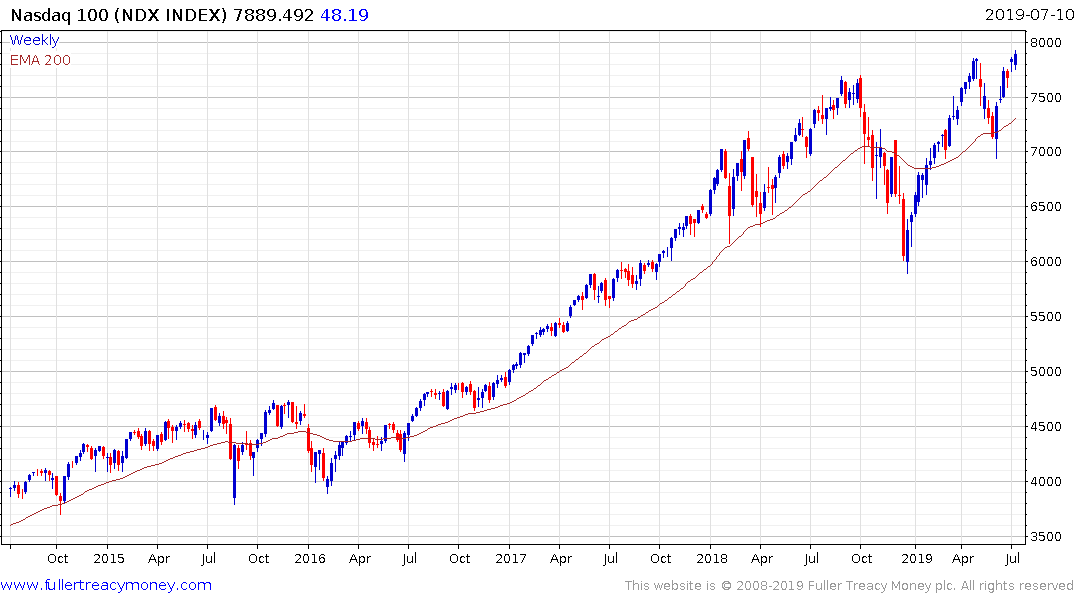 The Nasdaq-100 broke out to new highs today amid a short-term overbought condition. 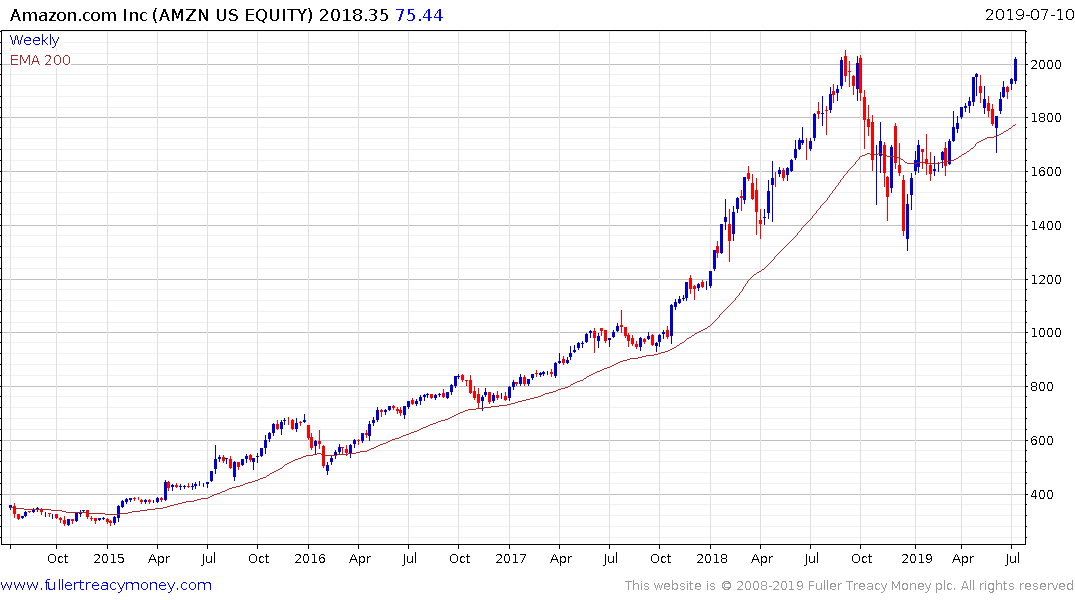 Amazon, which has been the buy-the-dip share of this expansion, closed above $2000 today. A short-term overbought condition is evident but a clear move below the trend mean would be required to question medium-term scope for continued upside. 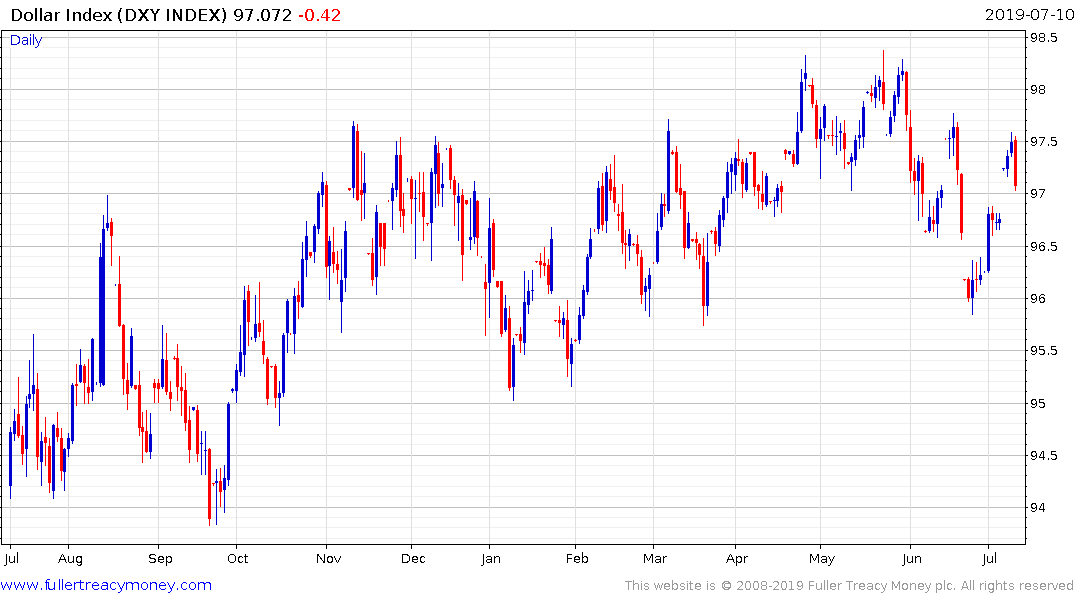 The Dollar Index has held a mild downward bias since May and held the sequence of lower rally highs today. A retest of 96 now looks more likely than not.