Federal Reserve Chairman Jerome Powell signaled an openness to cut interest rates if necessary, pledging to keep a close watch on fallout from a deepening set of disputes between the U.S. and its largest trading partners.

Referring to “trade negotiations and other matters,” Powell said Tuesday in Chicago that “we do not know how or when these issues will be resolved.”

“We are closely monitoring the implications of these developments for the U.S. economic outlook and, as always, we will act as appropriate to sustain the expansion, with a strong labor market and inflation near our symmetric 2% objective,” Powell said in opening remarks at a conference at the Chicago Fed.

The big question last year was how much tolerance the Federal Reserve has for drawdowns in the stock market. 10% was not enough in January, not least because Jay Powell had just taken the job. However, the persistent pace of raising rates and reducing the size of the balance set nerves on edge that the Fed was not paying attention to signals sent by the market. A 20% drawdown was enough to change that and the Fed rode to the rescue in December.

The deterioration of the trade situation and the opening of fresh fronts with Europe and Mexico have again made investors nervous. That has contributed to the stock market’s reaction over last few weeks which has unwound the short-term overbought condition.

Jay Powell’s statements today suggest the Fed is indeed alert to the risk of a recession with a flat yield curve, deteriorating global PMI indices, underperformance of banks and the underperformance of the mega-cap technology sector all pointing to tightening liquidity. What it also suggests is the Fed is willing to tolerate bubble risk rather than a deeper consolidation. 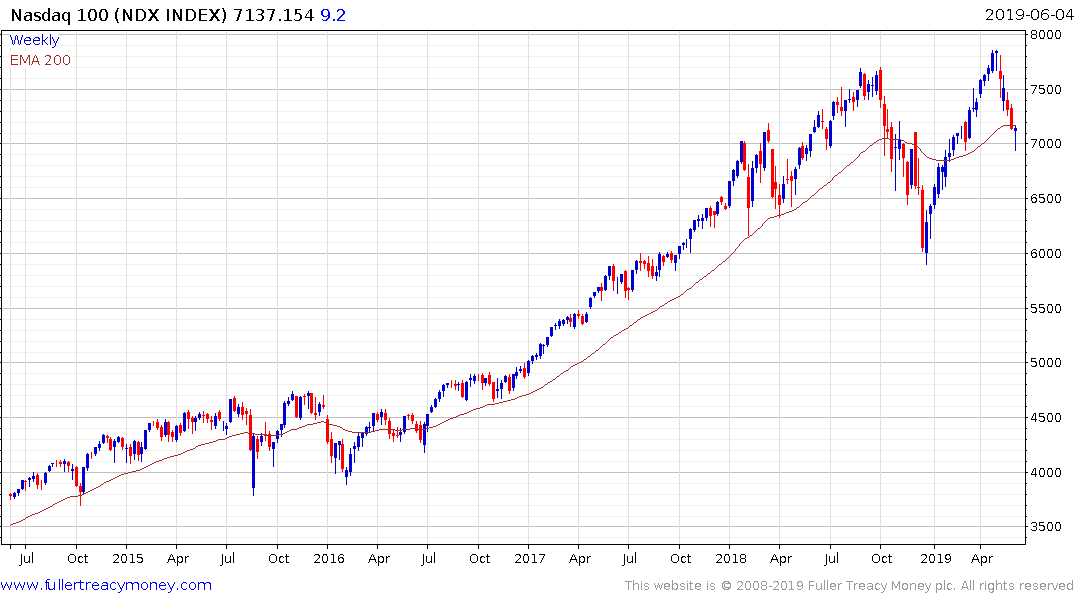 The Nasdaq-100 bounced today from the region of the trend mean and a sustained move below yesterday’s low would now be required to question potential for additional upside.