Powell Says Taper Could Start in 2021, With No Rush on Rate Hike
Comment of the Day

Powell Says Taper Could Start in 2021, With No Rush on Rate Hike by Eoin Treacy

Investors took the news of the coming taper in their stride -- avoiding any hint of the so-called 2013 “tantrum” when the Fed surprised markets by unexpectedly announcing it would start to pare back asset purchases. The S&P 500 rose during the much-anticipated address to stand more than 0.6% higher from opening levels. Ten-year Treasury yields nudged slightly lower to around 1.33% and the dollar fell.

“Chair Powell stuck to the script in his Jackson Hole speech; anyone hoping for a steer on the timing of the taper will have been disappointed, but it was never likely,” said Ian Shepherdson, the chief economist at Pantheon Macroeconomics.

At the July Federal Open Market Committee meeting, most Fed officials agreed it would probably be appropriate to begin tapering the central bank’s $120-billion-a-month bond-buying program before the end of the year, according to a record of the gathering. Some are pushing for a move as soon as next month.

Monetary policy makers would like to conclude the purchases before they begin raising interest rates, and several in June saw a possible need for rate increases as early as 2022 amid inflation that is running above the central bank’s 2% target. The Fed cut its benchmark rate to nearly zero and relaunched the crisis-era purchase program last year at the onset of the pandemic.

No surprises and the promise of a potentially lengthy interval between the end of quantitative easing and tightening was greeted with enthusiasm by investors. It ensures the Fed will remain a significant force in the Treasury market for a while longer.

Attention will now turn to the chances of the US government’s ambitious spending plans coming into effect later this year. The first hurdle will be the renegotiation of the debt ceiling. After that fractious formality is overcome, the way will be open for significant debt issuance and spending which will need to be funded by the Fed. Quite how that will gel with plans to taper is anyone’s guess. 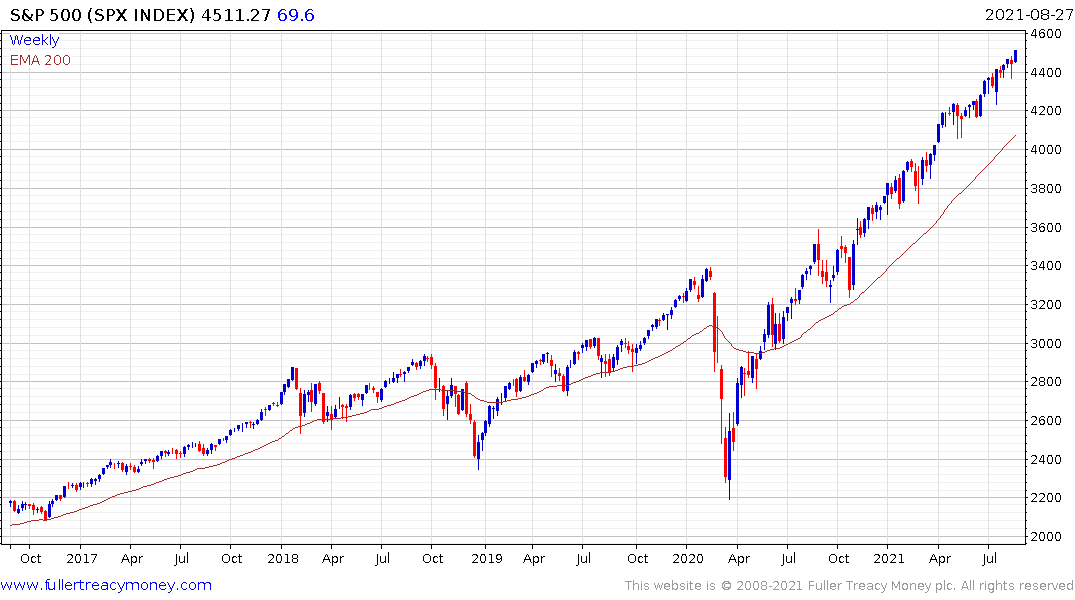 The stock market remains a siphon for liquidity and Wall Street extended the breakout to new all-time highs on the news.