Federal Reserve Chair Jerome Powell took a question Wednesday about something that doesn’t come up very often in congressional hearings about monetary policy: coinage. Representative John Rose, the Tennessee Republican, asked Powell if he was aware of the shortage of coins caused by the pandemic that he was hearing about from banks in his district.

“With the partial closure of the economy, the flow of coins through the economy has gotten all -- it’s kind of stopped,” Powell said, during the hearing before the House Financial Services Committee.

“The places where you go to give your coins, and get credit at the store and get cash -- you know, folding money -- those have not been working. Stores have been closed. So the whole system has kind of, had come to a stop,” he said. “We’re well aware of this. We’re working with the Mint and we’re working with the reserve banks, and as the economy reopens, we’re seeing coins begin to move around again.” Powell said he believed the shortage would prove only temporary.

Velocity of Money figures are notoriously hard to get a hold of. However it is reasonable to expect that with much of the global economy on lockdown the flow of liquidity around the system ground to a halt. Since central banks are in the business of ensuring there is sufficient liquidity in the system to promote growth, they have little choice than to flood the market during such times. There is an additional consideration that a long-term war on cash has been evident for some time and the coronavirus is an ideal excuse to dispense with cash even further.

The big question is what happens after velocity picks back up? Then, either central banks have to remove liquidity or risk a significant spill over into inflation. Right now, everyone is concerned with deflation and with good reason. Core CPI has contracted meaningfully and consumer behaviour was altered.

However, people are only likely to save to a rainy day for so long. Afterall doesn’t everyone know that the Fed and government will bail out everyone all the time anyway? Stocks always go up, don’t they? The seeds are being sown both for a bubble of epic proportions and inflation. In Charles Gave’s terminology and inflationary boom followed by an inflationary bust. 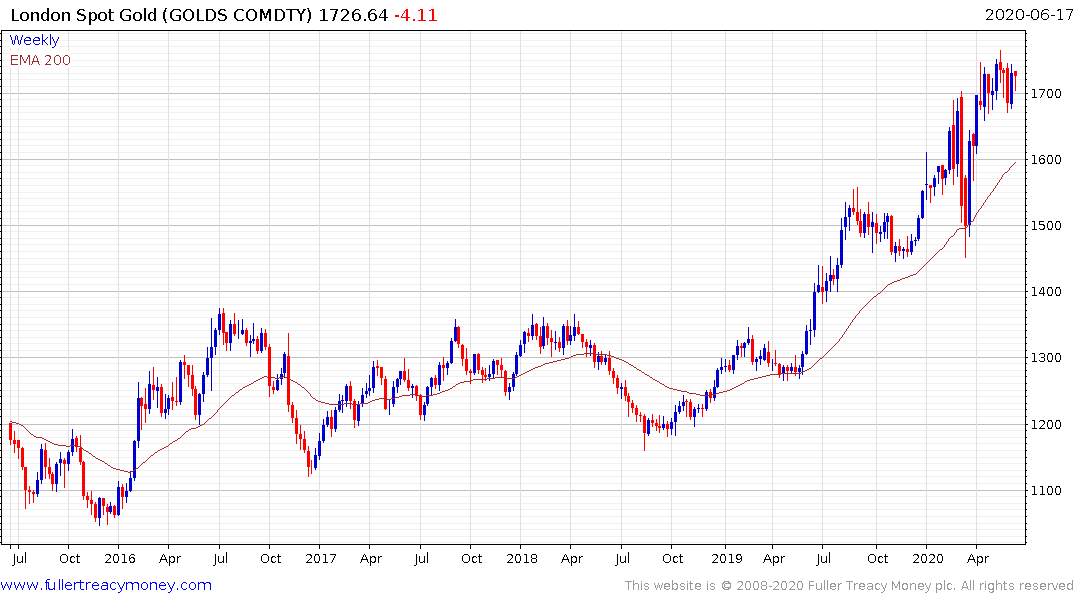 Gold has been ranging below the psychological $1800 level for the last few months. That region represented a significant area of resistance in 2011/12. A sustained move above it would confirm a return to medium-term demand dominance.

This article by Peter Orszag for Lazard may be of interest. It helps to explain the need for additional fiscal stimulus amid a crisis that still has the capacity to surprise. Here is a section:

The first, articulated by a friend and former colleague, suggests it’s like Cape Cod during the winter: The economy goes into a deep freeze, but then reopens the next summer. This view suggests there will be little lasting damage, and it’s possible to return to the way things were with minimal long-term adjustment.

The second perspective is that the pandemic is more like Cape Cod during a summer with a sudden series of shark attacks. As during the winter, economic activity plummets. But this stoppage was unexpected. And unlike during winter at the beach, it’s not clear when it will be safe to return. There may be false starts in which it appears the water is shark-free but the risk returns. Under this view, the economy probably suffers longer-lasting damage because of the direct and indirect effects of the lingering uncertainty and fear.

Very roughly speaking, the Donald Trump administration and the stock market prior to Thursday have seemed to embrace the Cape Cod-in-winter story. The May jobs report bolstered this view, as did the retail sales figures for the month. On the other hand, Federal Reserve Chairman Jerome Powell and the stock market on Thursday seemed to lean more toward the shark-attack narrative.

I’m from a tourist town where at least half the hotel rooms close for the winter season. It’s an expected part of the annual cycle and everyone knows you “make hay while the sun shines” in the summer. A bad season, like this year puts a big hole in finances for the coming winter. However, the lull of the winter is expected and businesses provision in anticipation like squirrels. For normal businesses, which to be more leveraged, a gap in activity is much more damaging.

The reality is with the summer season now in full swing, pressure is on politicians to open up so tourist businesses can save the year. That greatly increases the potential for additional spikes in the number of cases which is debilitating to sentiment. That's true even if the mortality rate is much less severe than initially thought. Fiscal stimulus might be a necessity if popular protests are to be kept under control.

That’s what stock market traders are betting on. This is the endgame for a 12-year liquidity-fuelled rally. There is no way the market can tolerate the removal of liquidity now that synchronised monetary and fiscal stimulus is a reality. The quantity of debt needs to continue to expand to sustain the stock market advance.