The pound weakened after U.K. lawmakers rejected Prime Minister Boris Johnson’s plan to fast-track his Brexit accord through parliament.

Britain’s currency dropped against all of its major counterparts, but the losses were contained after the government won an initial vote on the deal. Johnson opened the door to a short extension to his Oct. 31 deadline, saying he would pause legislation and go back to the European Union, after earlier threatening to throw out the deal if lawmakers rejected his plans.

“For now it seems the market is still generally expecting this is a setback, but not a fatal setback, to a negotiated Brexit,” said Jeremy Stretch, head of G-10 currency strategy at Canadian Imperial Bank of Commerce. “There hasn’t been a rapid uptick in no-deal pricing at this point,” he said, referring to a scenario where the U.K. would leave the EU with no divorce deal.

The U.K. currency had rallied more than 8% from September’s low as Johnson secured an agreement with the EU and then lawmakers then forced him to request an extension to the Oct. 31 deadline, reducing that no-deal risk.

Parliament today supported the deal which, as expected, excises Northern Ireland economically from the UK. That is not going to be received well by loyalist communities in North Ireland. However, it is likely to be positive for the region’s economy since it will have a toe hold between the UK and the EU and subject to corporate taxes could attract inward investment.

The UK is now closer to a negotiated exit, which is effectively membership of the EU in all but name, than at any time since the referendum. The next big question is whether Boris Johnson is going to trigger an election before or after he gets the deal into law. 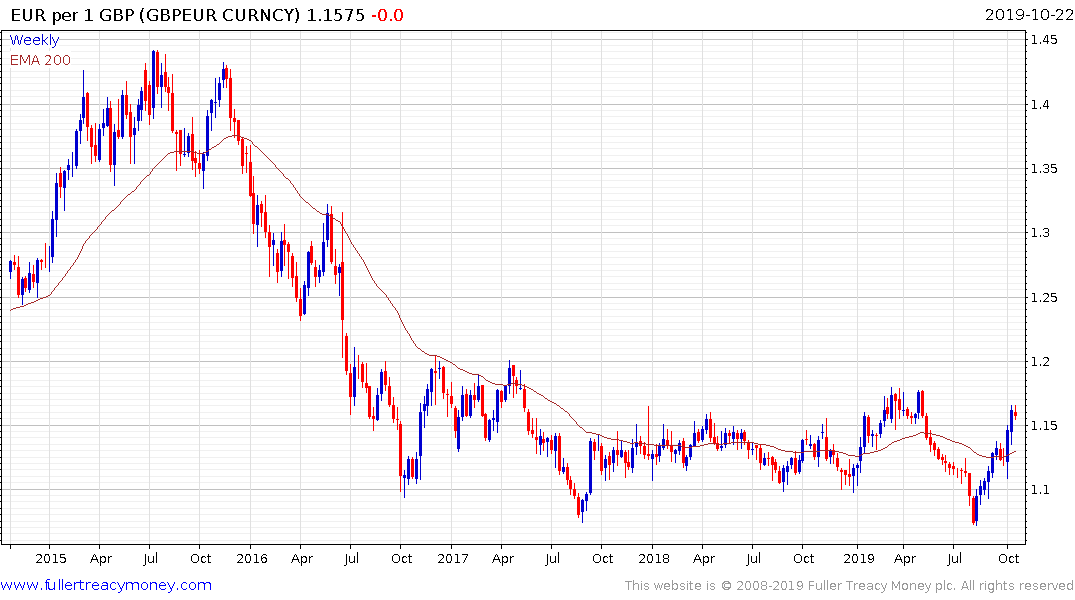 The Pound has eased back from the €1.16 level today and a sustained move above that level will be required to complete its base formation against the Euro.