That may change if the U.S. Congress sees taxes on the drug as a way to raise money, said Brad Barker, an analyst with Bloomberg Industries in New York.

“The second this is legalized they will start rolling out the marijuana cigarettes the next day,” Barker said. “I think the same thing can be said with everything else. Then you’ll have all the big boys jumping into this space.

More pharmacies would sell medical marijuana if drug companies created cannabis products that can be approved by federal regulators, like drugs or tobacco products, said Mark Kleiman, a professor of public policy at the University of California at Los Angeles School of Public Affairs.

“It’s not drug stores that have to make these decisions, its pharmaceutical companies that have to decide if they want to make cannabis products,” Kleiman said in a telephone interview.

Eventually, that could fuel a “big threat to the medical dispensary business model.”

In Westwood, Los Angeles, there is a road sign proclaiming “UCLA is a tobacco free campus” I’ve never seen a campus declare the same thing about marijuana. Guinness long relied on the slogan “Guinness is good for you!” and I remember when it was still prescribed for pregnant women with low iron levels. However, its recreational use far outstrips any dubious health benefits. Regardless of how one feels about the legalisation or otherwise of pot, the reality is that recreational use is surging and Colorado’s recent rule change suggests the trend is accelerating. 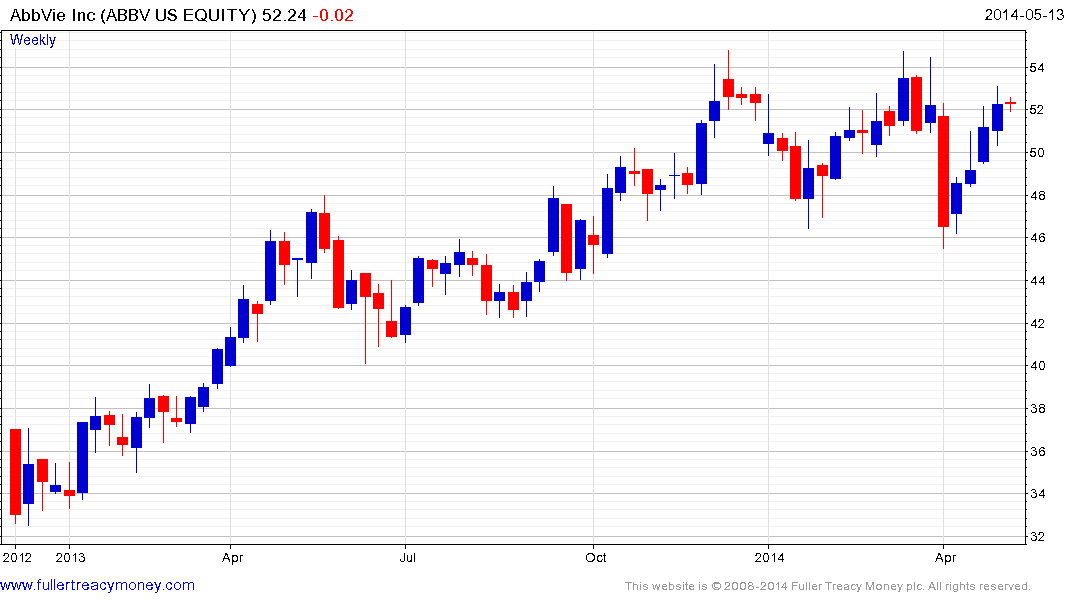 Among companies with some exposure to this market; Abbvie was spun off from Abbott Laboratories in December 2012. The share has spent much of the last six months ranging below $54. While somewhat overbought as it retests that level, a sustained move below $46 would be required to question medium-term scope for additional upside.