Officials worry that such sales would spark an abrupt increase in long-term interest rates, making it more expensive for consumers to buy goods on credit and companies to invest, according to James Bullard, president of the Federal Reserve Bank of St. Louis.

That “is a widespread view in parts of the Fed, I think, and in financial markets,” Bullard said in an interview last week. While he disagrees with that perspective, it “won the day.”

The Fed is testing new tools that would allow it to keep a large balance sheet even after it raises short-term interest rates, a step policy makers anticipate taking next year. They would use these tools to drain excess reserves temporarily from the banking system.

“It is pretty clear they are anticipating operating in a situation with a lot of reserves and a high balance sheet for a long time,” said former Fed governor Laurence Meyer, a co- founder of Macroeconomic Advisers LLC, a St. Louis-based forecasting firm.

The US government deficit has shrunk from a credit crisis nadir of 10% to its current 2.9% and continues to improve. This has meant the Treasury is issuing fewer bonds. However, the Federal Reserve’s balance sheet has continued to expand which has been a tailwind for Treasury prices. If the Fed continues to cut is purchase sizes by $10billion a meeting it will cease purchasing Treasuries and mortgage bonds by October.

After that it has the decision of what to do with the proceeds from maturing bonds and the associated coupon payments. It could choose to reinvest in more bonds or withhold the additional liquidity which would sanitise the original capital infusion. Leaving aside the argument over whether the Fed’s balance sheet is set to contract from late this year, the more important consideration from the perspective of Treasury investors is what happens when a major buyer stops buying. The logical answer is that other parties need to increase their buying if prices are to be sustained.

I have previously described the Merrill Lynch 10-year+ Total Return Index as the most important chart in the world. When a rivetingly consistent 30-year trend loses consistency it would be foolhardy to ignore the implications; supply is gradually gaining the upper hand. The Index has lost momentum over the last 18 months, failed to sustain a move above 2000 a year ago, dropped below the MA and spent more time trading below it than any time since 1983. The recent rally back to retest the round 2000 has met with at least temporary resistance and a sustained move below 1980 would break the short-term progression of higher lows. This pattern has developing type-3 top formation characteristics as taught at The Chart Seminar. 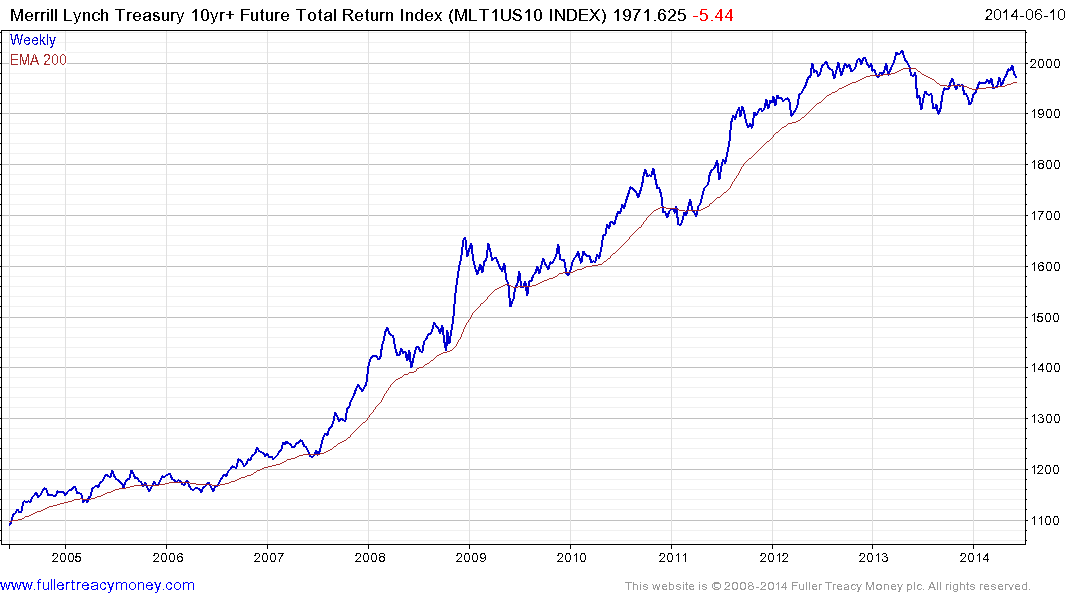 Wall Street is unwinding its short-term overbought condition so this has bolstered demand for Treasuries at least for the moment. We do not know how long topping activity might take but this is not a cheap market. More broadly the strong correlation between the expansions of the Fed’s balance sheet and the S&P500’s uptrend is likely to be tested from later this year.