A new "C" class of Google shares will begin trading on Thursday under the familiar GOOG ticker. This stock gives its owners zero votes at the annual shareholder meeting. That sounds bad. In practice, however, the nonvoting shares won't be so different from holders of Google's "A" class shares, which get one vote apiece. Both groups are dominated by holders of the only shares that matter: class "B" shares with 10 votes each. Most of those are owned by Google's founders, Sergey Brin and Larry Page.

Page and Brin aren't satisfied with the 55.7 percent majority of votes they already control today. As Google issues less-potent "A" shares to compensate employees or to finance acquisitions, the company's founders have seen their voting power diluted. Now that the company is issuing the neutered "C" shares to ensure Page and Brin retain control far into the future, they're free to create as many shares as they like without giving up an iota of their grip on Google's direction.

Google remains a core constituent of the Autonomies not least because of its global reach and dominance of the online marketing sector. However, the creation of an additional non-voting share class suggests a lack of respect for minority shareholder opinions. On the other hand, the performance of Google's shares is likely to continue to reflect the opinions of those shareholders. The share continues to extend its decline back towards the 200-day MA.

Due to this restructuring of the equity, the new non-voting C Class of shares are listed under the GOOG ticker while the back history from the 2004 IPO is now contained in the new GOOGL ticker. 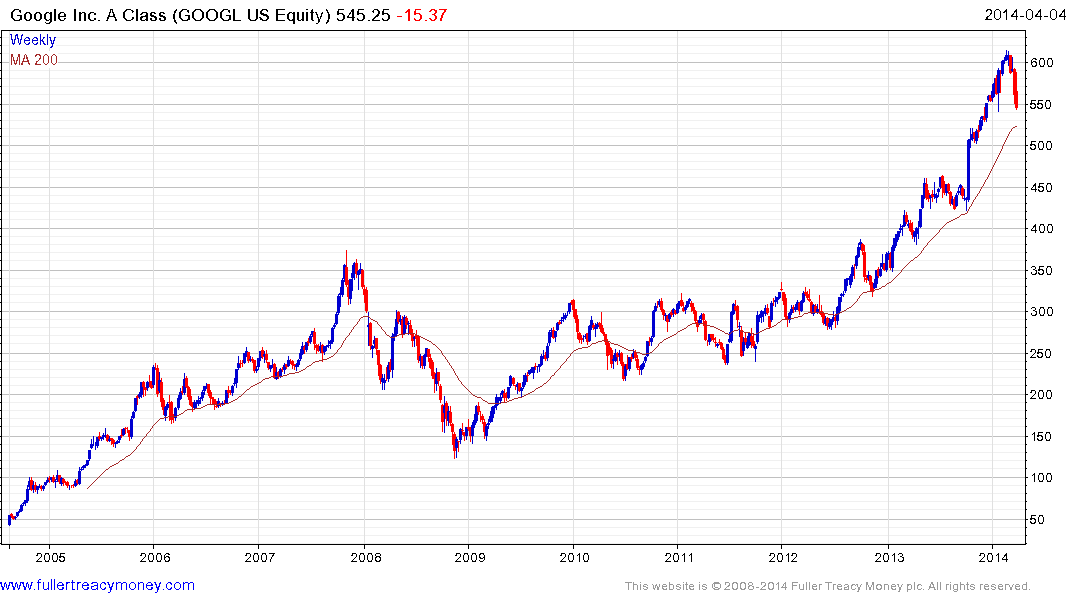