Finally, it appears from many discussions from producers that my total impact figure of 2.5 pigs per infected sow is too low.  It looks like 2.7 pigs per sow appear to be better and may still be conservative.

Allowing for more small farms in the accession data in January and February, and for a one-month delay in part of the pig losses to account for some lingering challenges, I estimate total losses through February stand at roughly 6.08 million pigs.  Using the NAHLN monthly data for suckling pig accessions (see Figure 2) to determine the time distribution of pig losses leads to a loss of 1.684 million pigs in February, just over one-third higher than in January.

Table 2 also shows my computations and adjustments for impacts on future slaughter. Note that I made one change relative to two weeks ago in that I added 2.5% to 2013 slaughter totals to allow for normal death loss and thus estimate the number of weaned pigs that were originally destined for slaughter in that given month.  It give us an apples-to-apples comparison to the pig loss figures.

The bottom line is that August slaughter will be impacted even more than July.  Allowing for 4% higher weights, pork production in August could be 13% lower than one year earlier.  As I pointed out two weeks ago, I’m not at all comfortable with a year-on-year change of that magnitude but the data say it is so and the feedback I have received from knowledgeable industry participants indicates that, if anything, my loss estimates are conservative. That is unbelievable.

The evolution of the Porcine Epidemic Diarrhoea Virus has resulted in a sharp run-up in lean hogs prices which were already at historically high levels. The futures curve is in backwardation between June 2014, which is the most active contract, and April 2015; suggesting tight supplies for the foreseeable future. As the above article highlights, we do not yet have conclusive evidence that the infection rate has peaked. 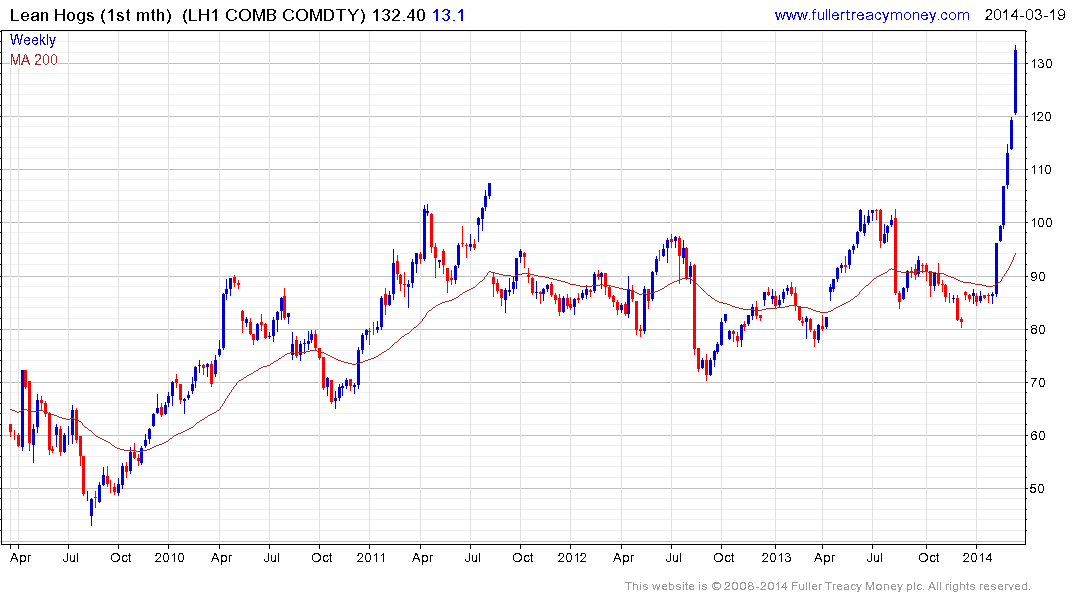 Lean Hogs formed a first step above the long-term base between 2011 and late 2013, before breaking out to new all-time highs in late February. Since this is a fundamentally driven advance, it does not make a great deal of sense to talk about overbought conditions. However what we can conclude is that leveraged traders will have an increasing incentive to introduce stops, the higher prices move and there has been a clear acceleration which is unsustainable beyond the near term. The first clear downward dynamic, represented by a limit-down move, will be required to signal stops are being hit.