The majority of Eastern European stock market indices bounced from short-term oversold conditions today as investors responded to the relatively muted political response of the USA and EU countries to Russia’s annexing of Crimea. However, does anybody really think that Russia will be satisfied to stop at Crimea?

Russia continues to mass troops on Ukraine’s eastern border and may be reasoning that a play for more territory is worth the risk of increasingly stringent sanctions from Europe and the USA. Considering how reliant Europe remains on Russian energy, it remains questionable how effective sanctions are likely to be. I thought it might be worth reviewing Eastern European markets in light of this unfolding situation. 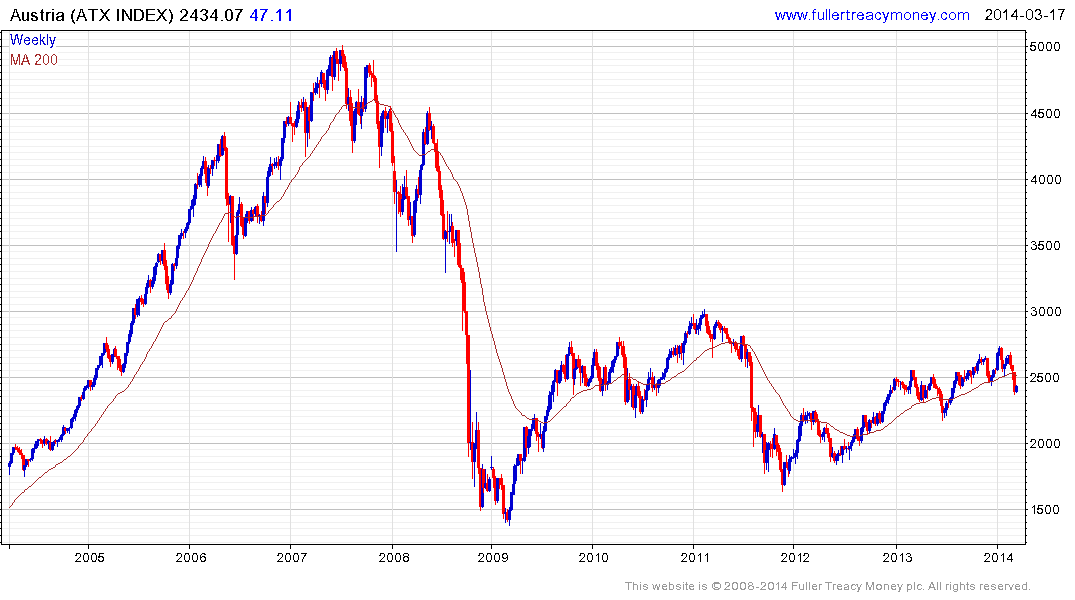 Austrian companies have some of the greatest exposure to Eastern Europe of any EU state, not least Erste Bank. The ATX Index fell to break a medium-term progression of higher reaction lows last week. It posted similar drawdowns in both 2013 and 2012 and will need to sustain a move back above 2500 during the current rebound if medium-term scope for continued higher to lateral ranging is to be given the benefit of the doubt. 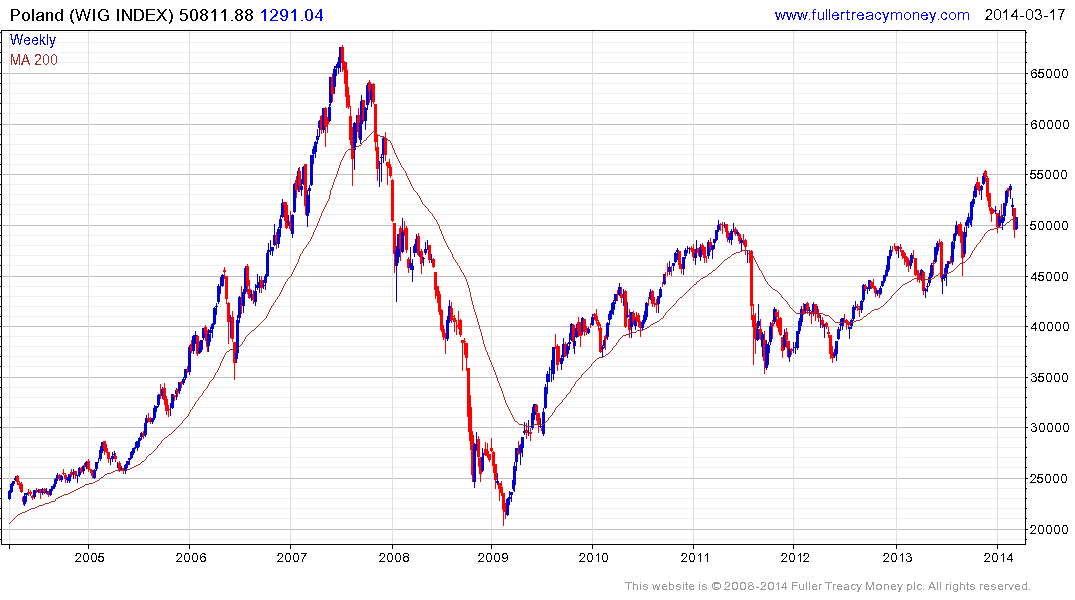 The Polish WIG Index has returned to test the psychological 50,000 level, the region of the 200-day MA and found at least short-term support today. A sustained move below last week’s low near 48750 would be required to question potential for an additional bounce. 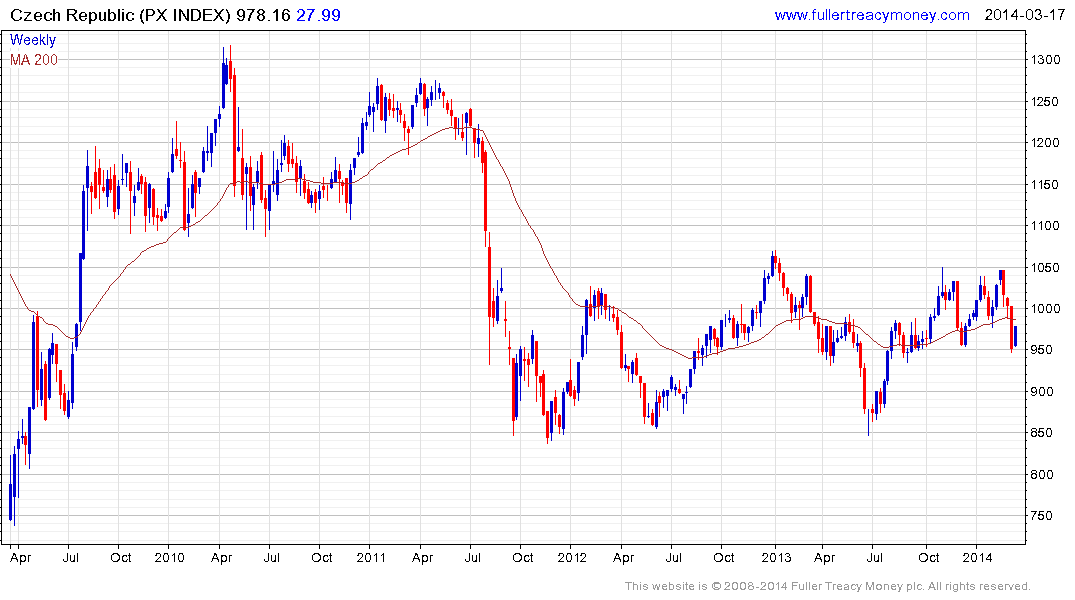 The Czech Index remains confined to a more than two-year range but found at least short-term support today at the December low near 950. 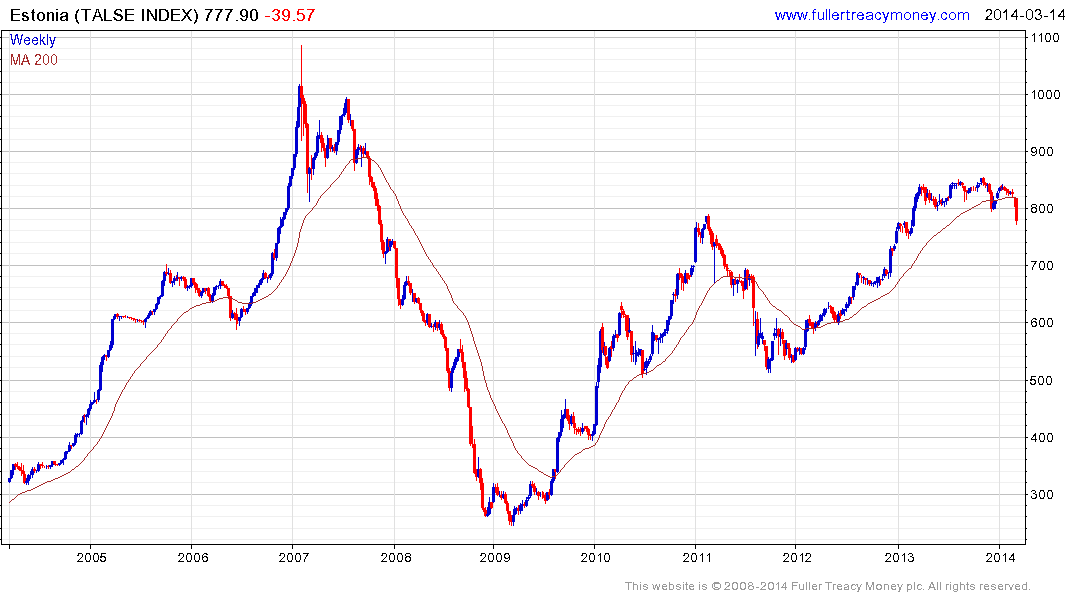 Estonia has a land border with Russia. The Index lost momentum from early 2013 and broke downwards last week. A sustained move above the 200-day MA will be required to check top formation completion characteristics. However, the market’s relatively attractive valuations (P/E 12.15, DY 5.31%) may help to cushion its decline. 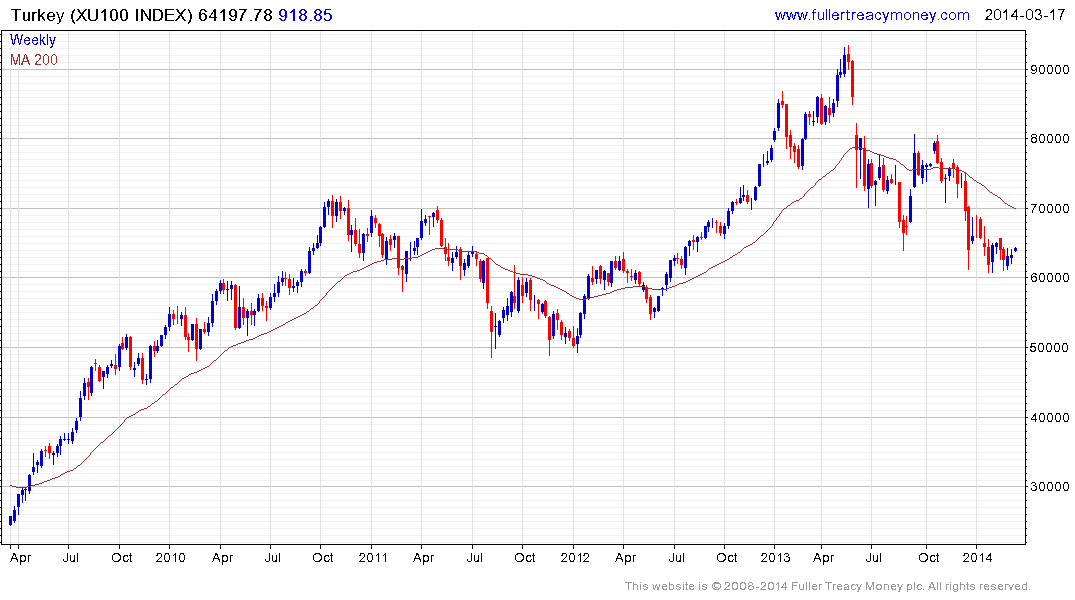 Turkey is a NATO member so its territorial integrity is not in question. The market’s weakness has been attributed instead to deteriorating standards of governance a widening trade deficit and a weak currency. The pace of the Lira’s decline has stalled over the last month and the National 100 Index has stabilised above 60,000. A sustained move below that level would be required to question current short-term potential for a reversionary rally back towards the 200-day MA, currently near 70,000. A move above 70,000 held for more than a week or two will be required to begin to suggest a return to demand dominance beyond the short-term.

The majority of Eastern European stock market indices have developed short-term oversold conditions and at least some unwinding of those conditions is now underway. However, the political risks that initiated this sell off are still present. These indices will need to find support above last week’s lows in order to demonstrate demand has returned to dominance beyond short-term scope for a further bounce.