Last week, the CCMA announced that talks had been suspended indefinitely after all parties involved failed to reach an agreement, to the detriment of the miners that have not earned a salary in close to seven weeks.

The latest utterances are likely to jeopardise the wage negotiations that are already under strain as all the parties involved have pointed fingers at one another, accusing each of negotiating in bad faith.

Workers in the platinum belt have lost close to R4 billion in wages while the companies have lost R12 billion.

The workers are demanding a R12,500 minimum basic wage for entry level underground workers while the companies have only offered increases ranging from 7 to 9%

Laura Mseme, a spokeswoman at the CCMA has called on the Chamber of Mines to either retract comments by its chief negotiator about the handling of the current platinum strike – or face the consequences.
?
She said Strydom “unjustly accuses the CCMA of misconduct and incompetence”. In addition, she said: “It surely cannot assist the crisis in the industry, and we regard it as an undesirable strategy during such a fragile and complex process…We specifically wish to put on record that at no stage have any such concerns been raised with the CCMA, and we consider it alarming that an organisation such as the Chamber of Mines could utilize a public forum to express its opinion without having at any point raised these issues with the CCMA”

The South African labour dispute has weighed on the platinum mining sector over the last year. While a small number companies have reached agreement with their workers, the issue remains a front page story that is debilitating to investor confidence. Despite tensions, the labour dispute has had relatively little effect on platinum prices. Platinum remains rangebound and is currently rallying towards the upper boundary. A sustained move below $1450 would be required to question current scope for continued higher to lateral ranging. 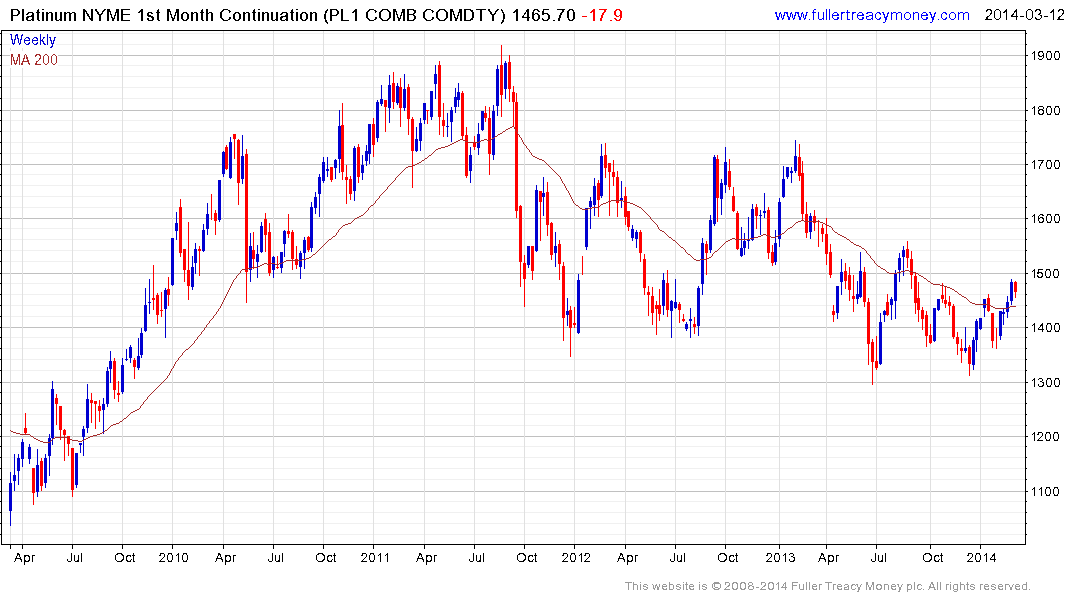 Palladium rallied late last week to break its more than yearlong progression of lower rally highs and a sustained move below the 200-day MA would be required to question current scope for additional upside. 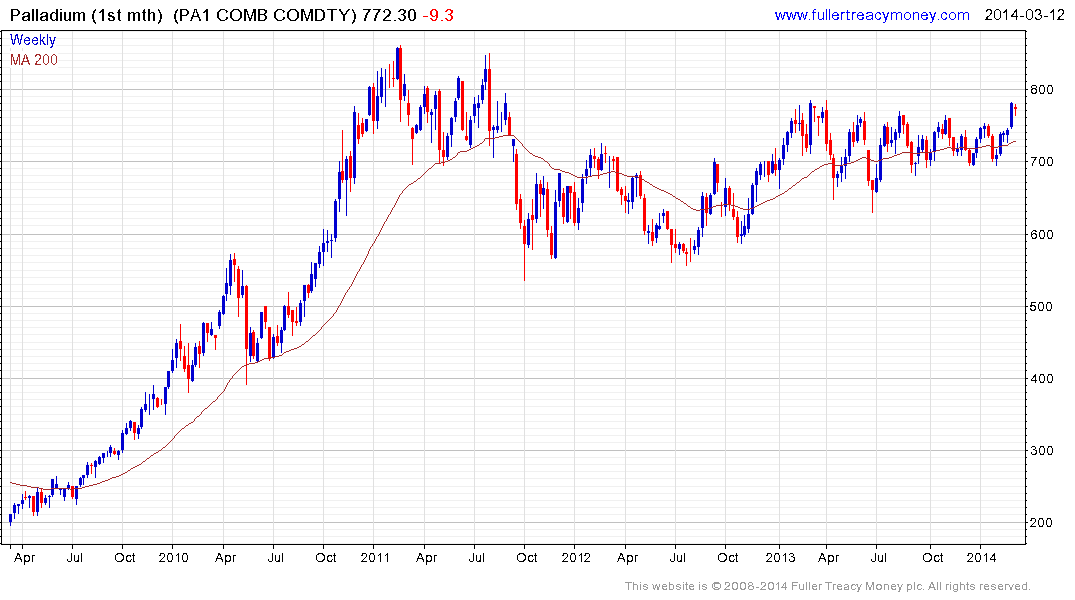 With the underperformance of South African platinum group metal miners, investors are looking elsewhere for exposure to the metals within the equity markets. ETFs are an obvious destination but miners with assets outside of South Africa are another. Norilsk Nickel pulled back today but continues to hold a progression of higher reaction lows. 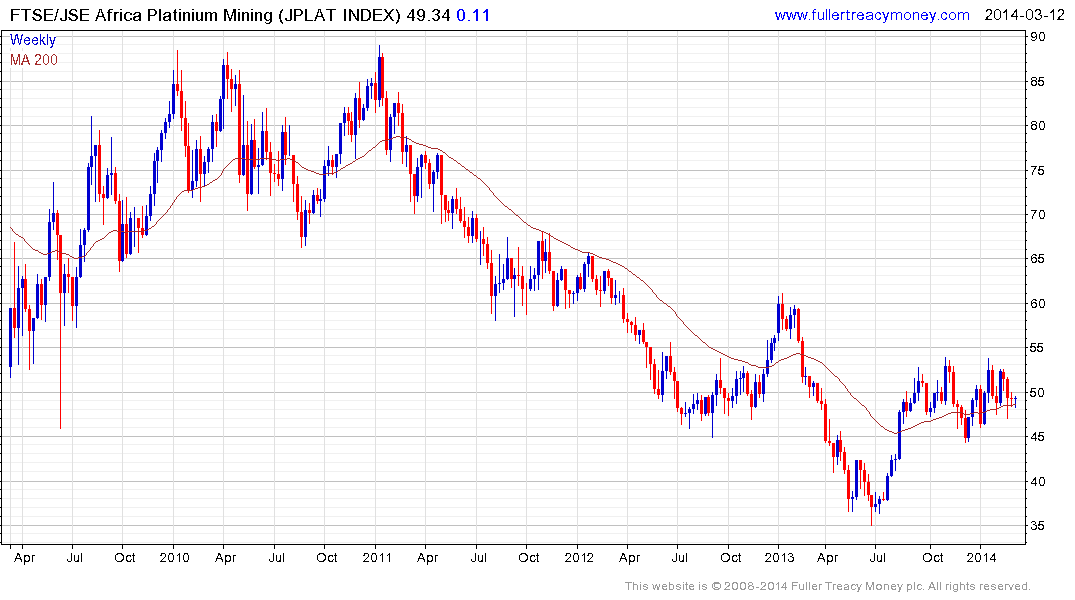 Stillwater Mining is also worthy of mention. It is US listed with US domiciled mines and also recycles platinum group metals. The operations were split approximately represented 58.4% and 41.6% respectively according to the most recent data available on Bloomberg. The share has rallied to test the upper side of a more than two-year base and while some consolidation of short-term gains is likely, a sustained move below $12.50 would be required to question medium-term scope for additional upside. 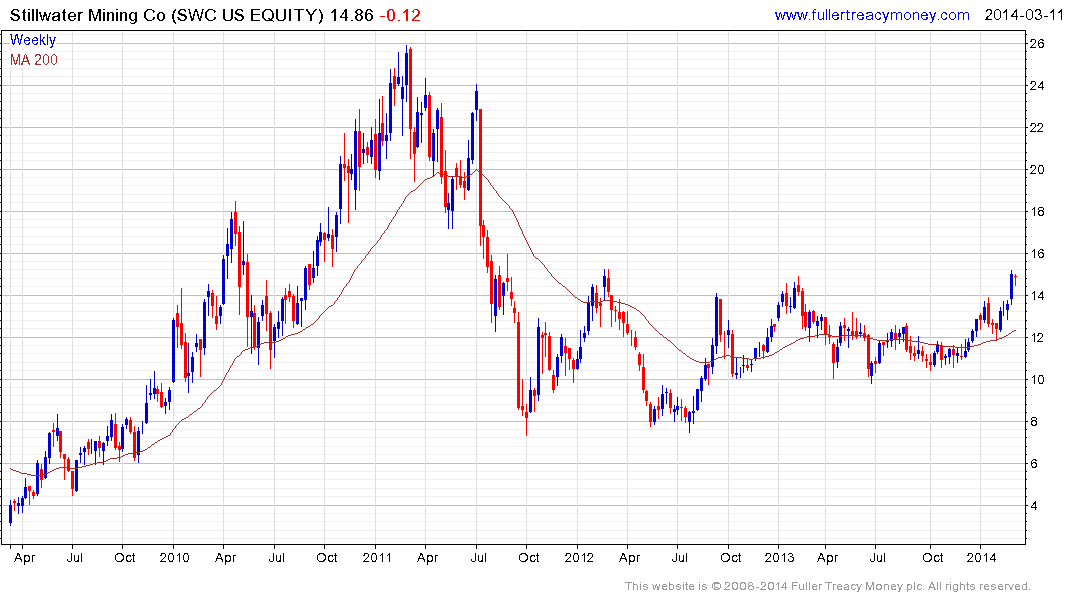 Elsewhere in the precious metal recycling and refining sector, UK listed Johnson Matthey is a former constituent of the S&P Europe 350 Dividend Aristocrats Index and currently yields 2.14%. The share peaked with a downside weekly key reversal in January and pulled back sharply this week to test the region of the 200-day MA. It will need to hold in the 3000p area if the medium-term uptrend is to continue to be given the benefit of the doubt. 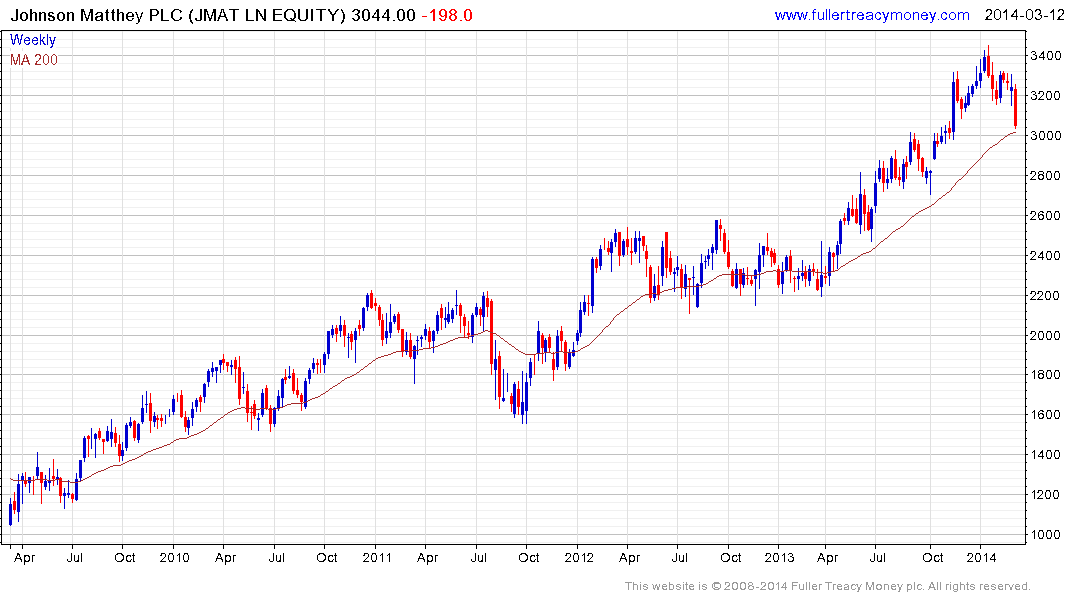