While in Singapore last Sunday I was nursing a sore throat following The Chart Seminar and Global Strategy sessions in Sydney, and decided to spend some time clicking through the constituents of the Euro Stoxx Index using a long-term time horizon in order to identify base formations. The reason I chose the Euro Stoxx Index is because it has lagged the wider Europe Stoxx Index over the last two years not least because of the effect the Eurozone crisis has had on its respective stock markets. 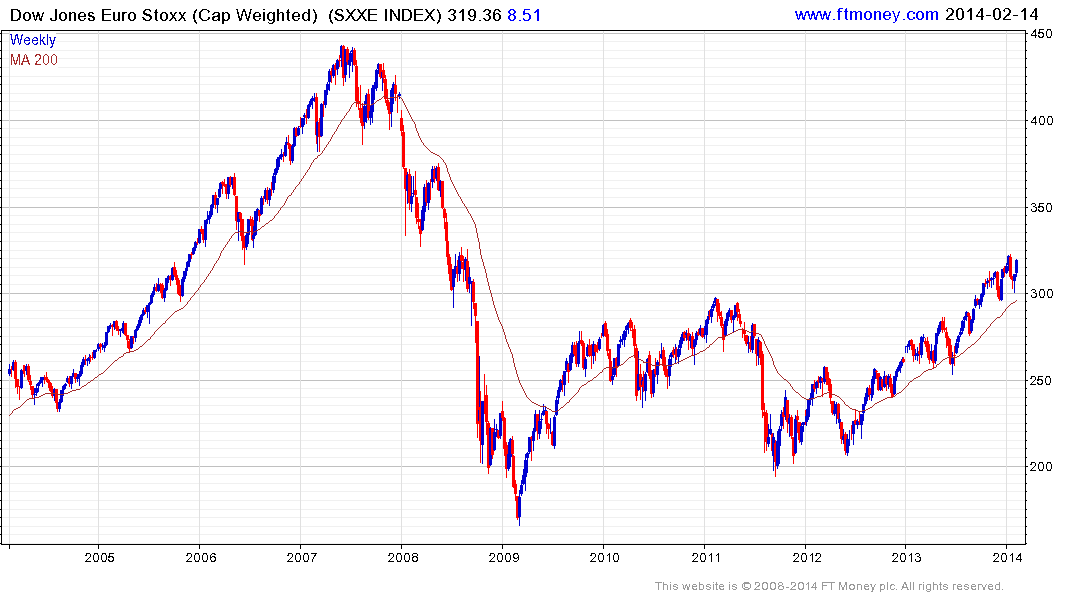 The Euro Stoxx Index has 292 constituents and broke out to new 5-year highs in October. It found support in the region of the 2011 peaks in December and late January and a sustained move below 290 would be required to question medium-term potential for additional upside.

Following the click through, I winnowed the list down to 110 shares with promising characteristics. From past experience that is usually a reasonably good number to identify commonality. 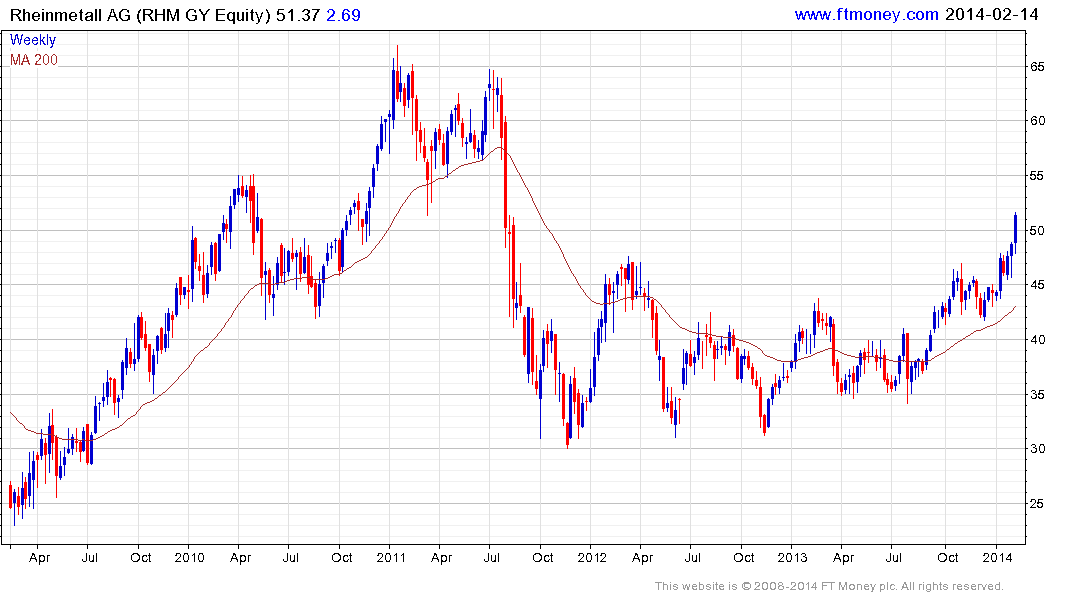 German listed RheinMettal represents an interesting proposition since its business is split evenly between defence and auto components. The share found a medium-term low in 2011 near €30 and has held a progression of incrementally higher reaction lows since. It broke out to new 30-month highs this week and a sustained move below €45 would be required to question recovery potential. 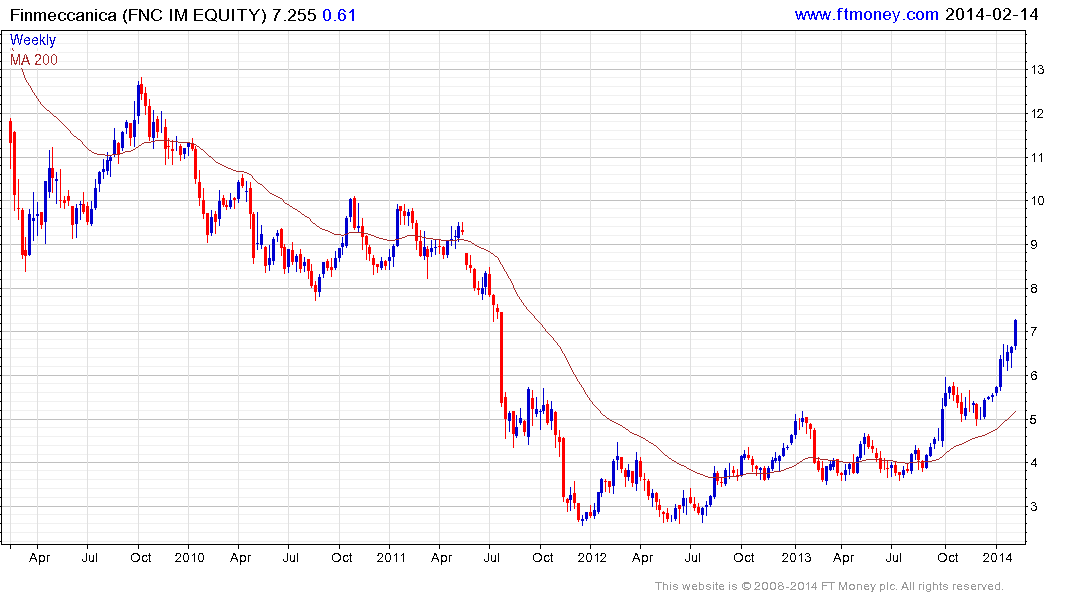 In the defence sector, Italian listed Finmeccanica completed a first step above its two-year base in January and a sustained move below €6 would be required to begin to question medium-term upside potential. 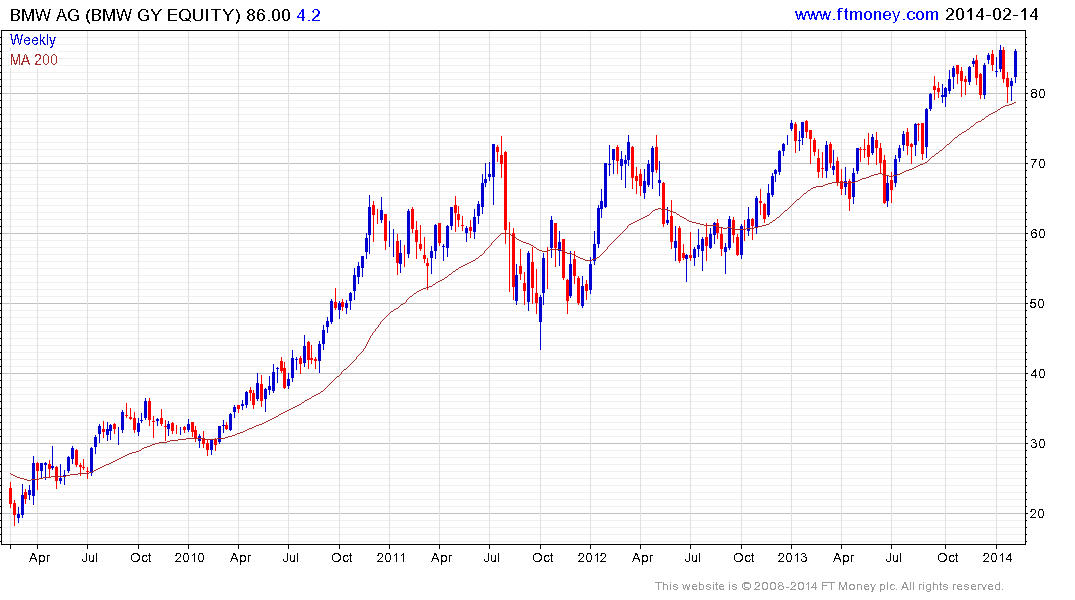 In the auto sector. German listed BMW found support last week in the region of the 200-day MA and upper side of a two-year range. A sustained move below €78 would be required to question medium-term potential for additional upside. 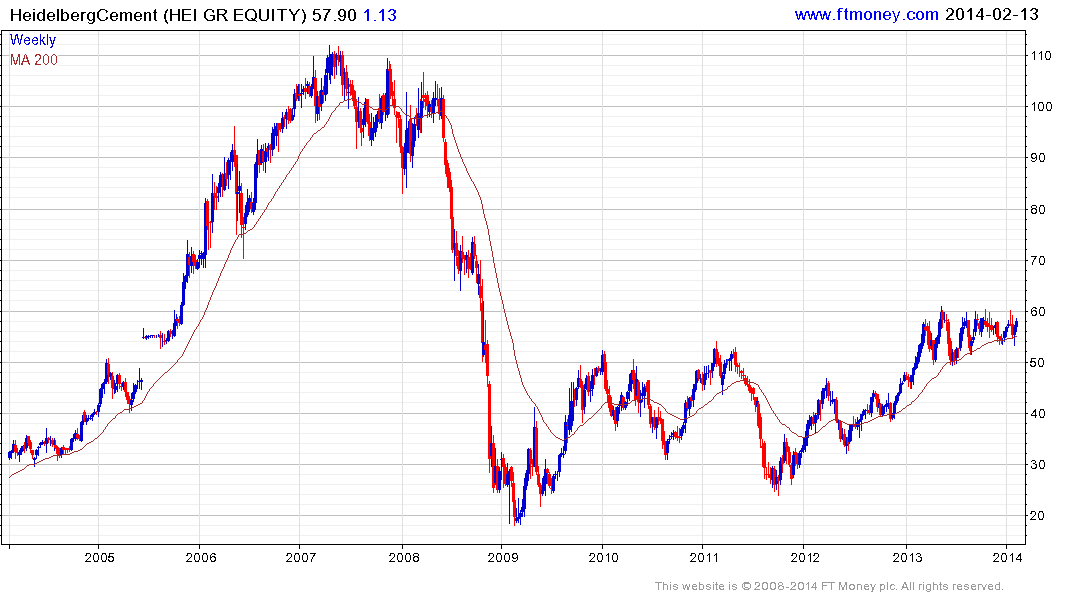 The fact that building materials, REITs, property management and cement companies all have similar patterns suggests that the property market is probably stabilising. US homebuilders broke out of their bases 2 years ago. UK homebuilders broke out about a year ago so perhaps Eurozone construction shares may be primed for additional upside this year. Heidelberg Cement has been forming a first step above its three-year base since early 2013 and is currently rallying towards the upper boundary. 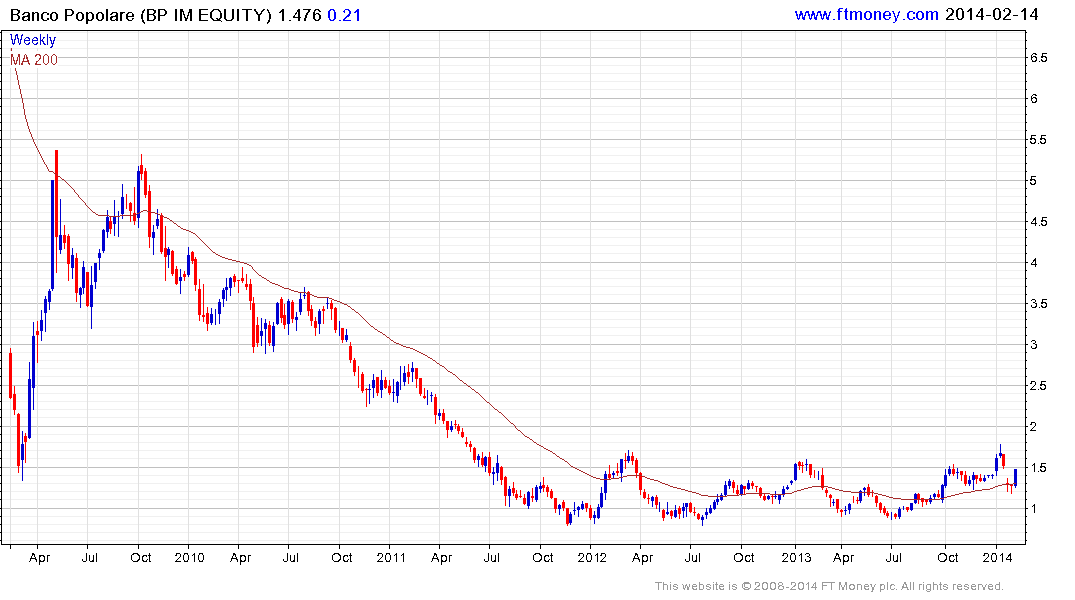 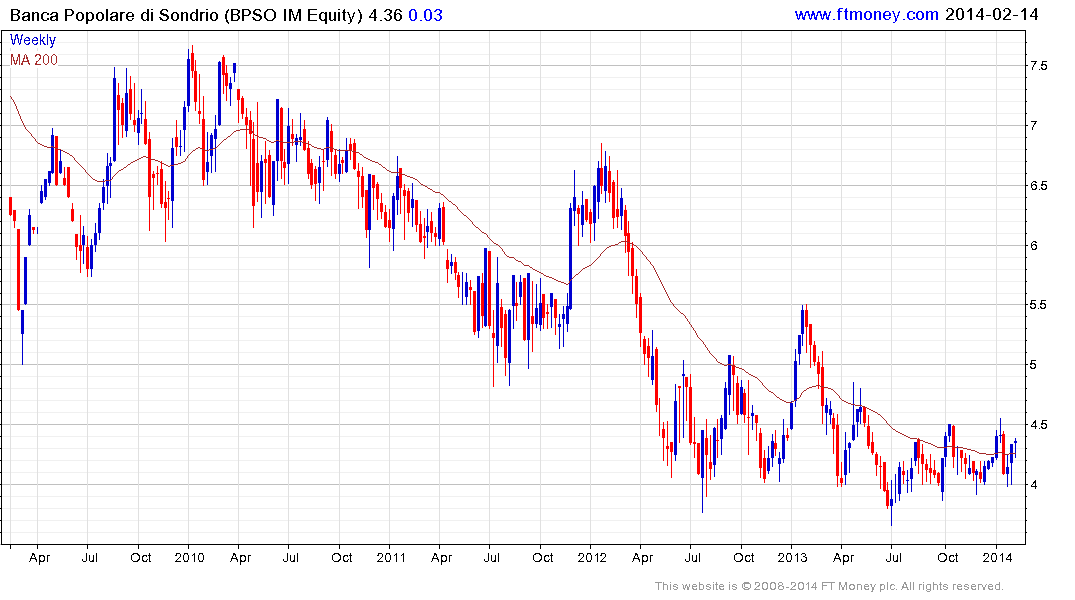 If property is stabilising that should also be positive for the banking sector. A number of peripheral banks are trading at the upper side of base formations. Several Italian banks announced share sales in December and pulled back sharply. However, the more recent news is that Qatar is in the market for substantial stakes in Italian banks so rallies are underway. For example, Banco Popolare Societa Cooperativa is one where Qatar is believed to have an interest while Banco Popolare di Sondrio has a consistent sequence of higher reaction lows within its base. 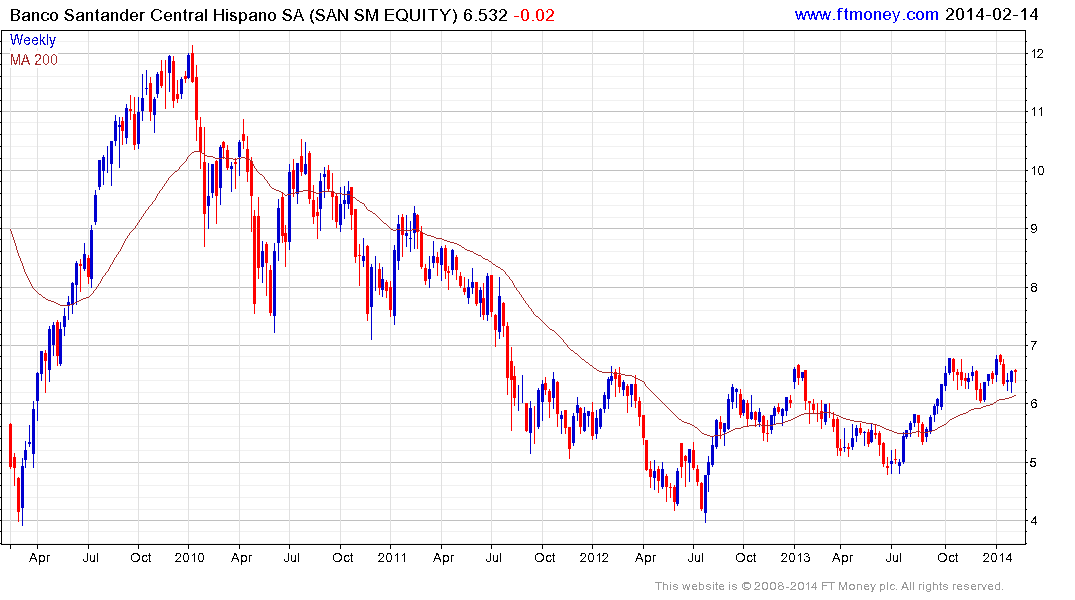 Spain’s Santander is one of the few Eurozone banks to have continued paying its dividend throughout the crisis and currently yields 9.26%. The share continues to form a first step above its base. 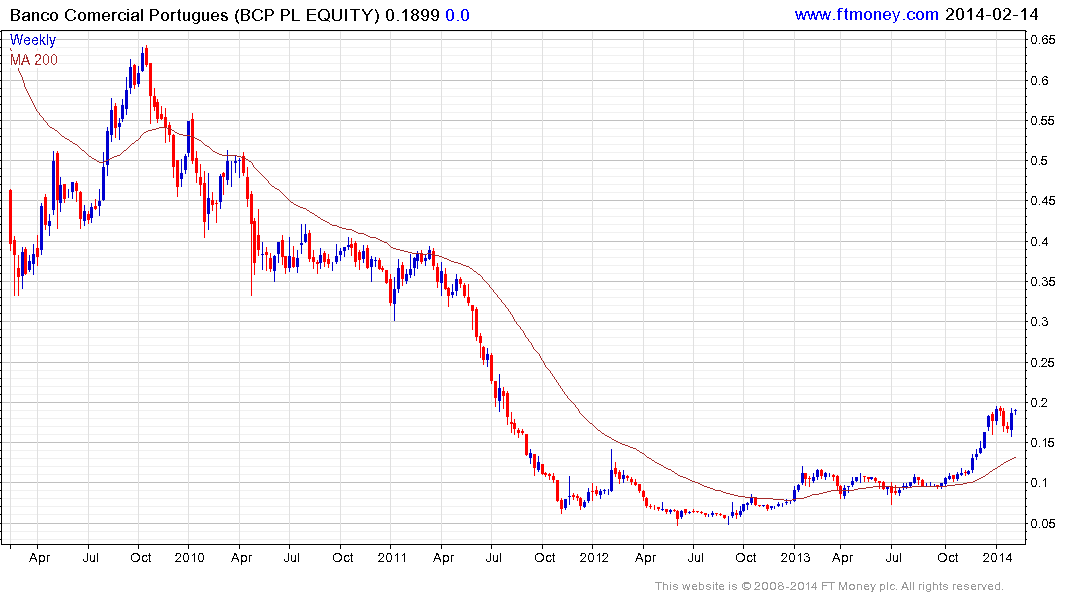 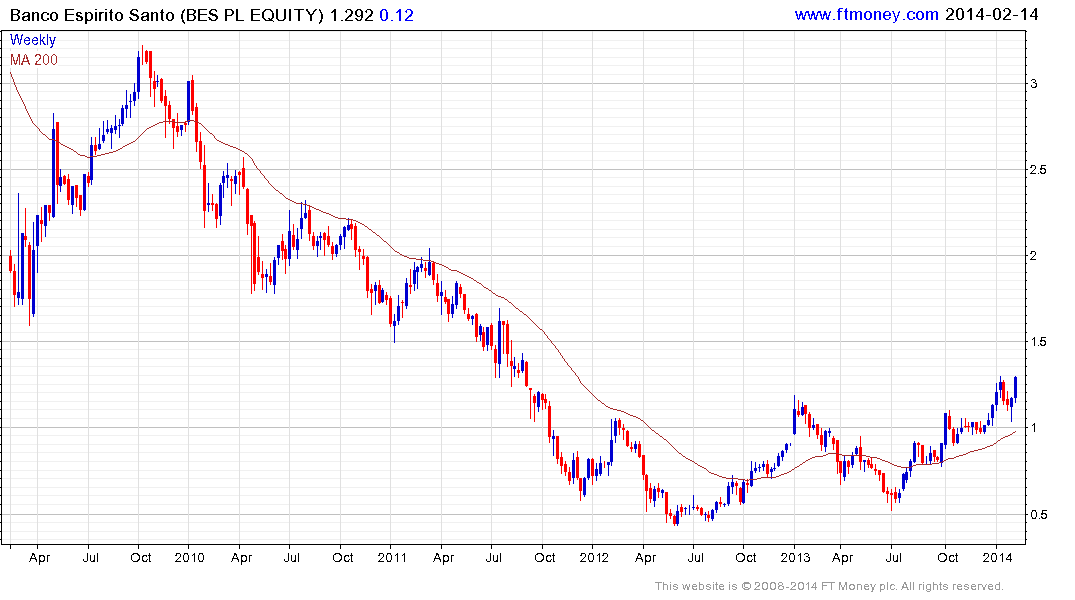 While Spain and Italy have received a great deal of attention, Portugal is also worthy of mention. Bond yields have been contracting across the Eurozone periphery but Portugal’s are still wider than the others and it is due to exit its bailout in the summer. That suggests a rerating is due. Banco Commercial Portugues firmed from the region of the MA last week. Approximately 15% of revenue originates in Africa. Banco Espirito Santo found support last week in the region of the 200-day MA and appears more likely than not to continue on a recovery trajectory. 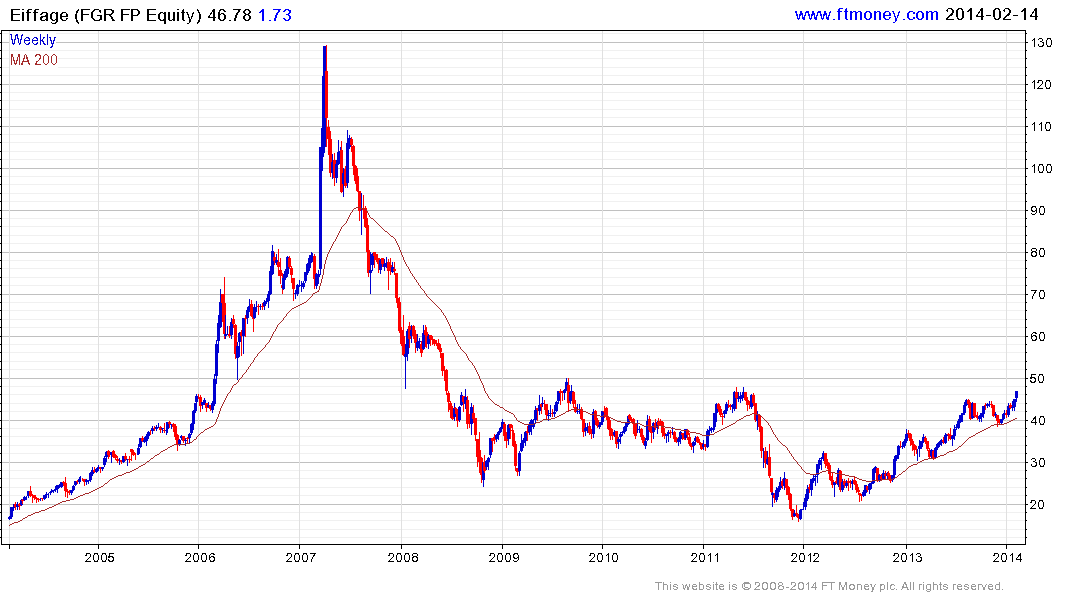 In the infrastructure development sector Eiffage is primarily France oriented. It has been trending higher within the five-year base and hit a new two-year high this week. 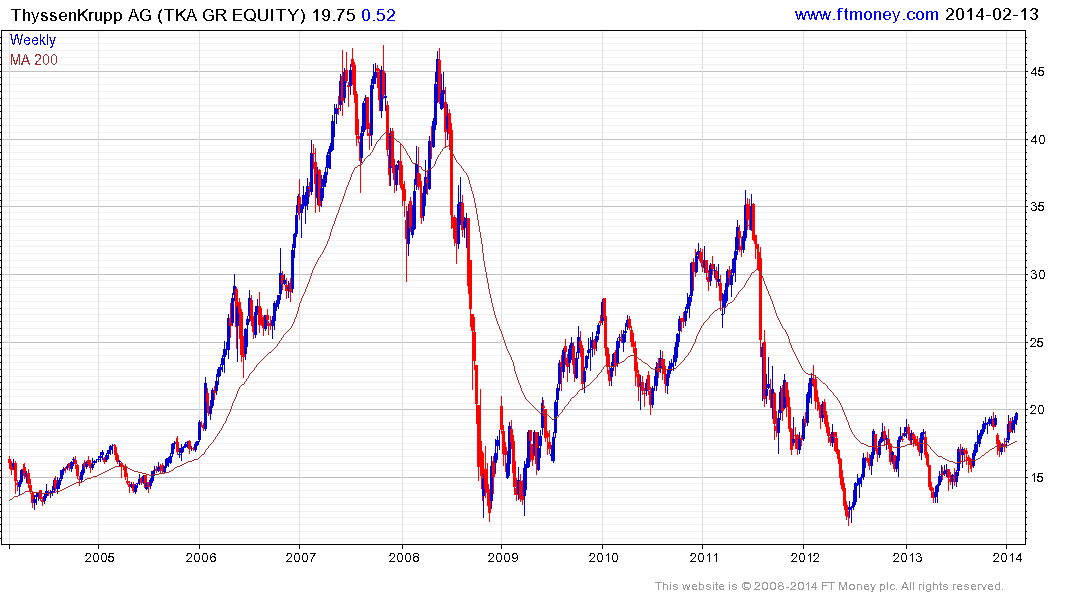 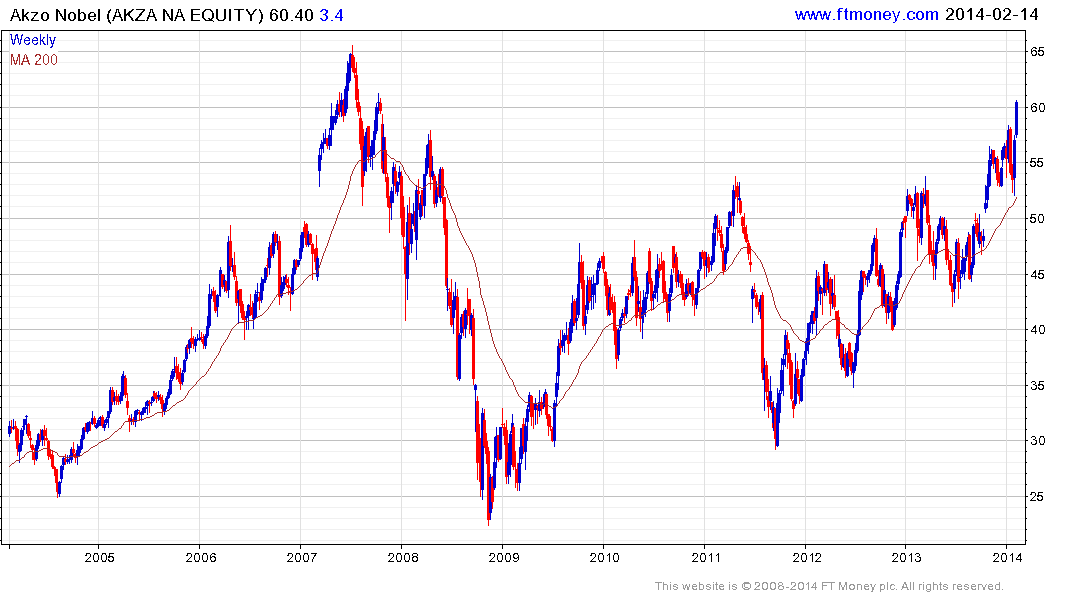 Materials’ science represents a growth industry as nanotechnology becomes an increasingly commercial sector. Chemical companies should be among the greater beneficiaries of this trend. Akzo Nobel firmed from the region of the MA last week and has since rallied to test it historic peak near €60. 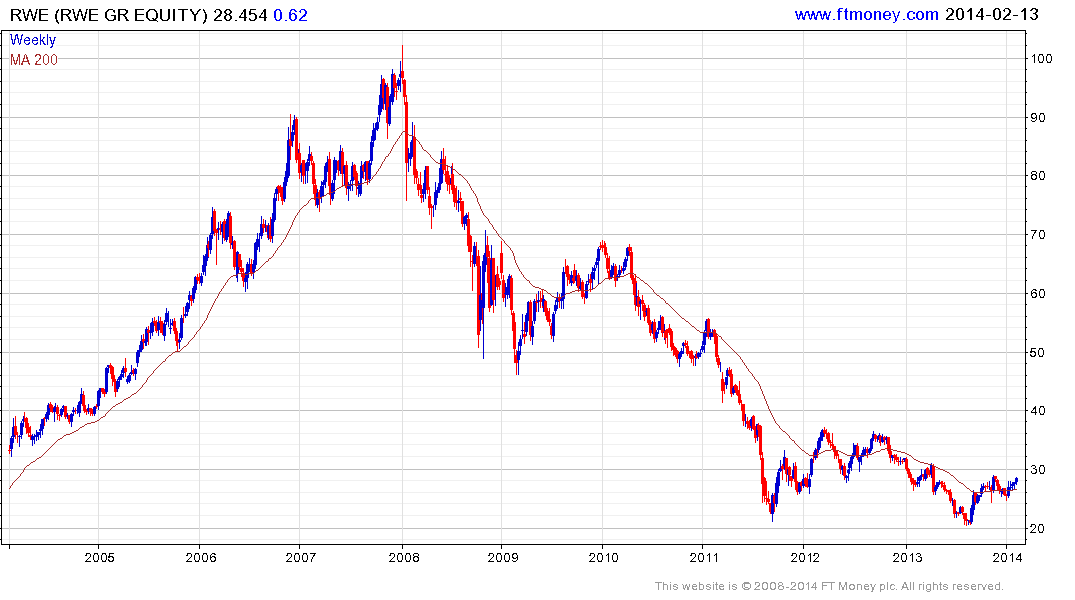 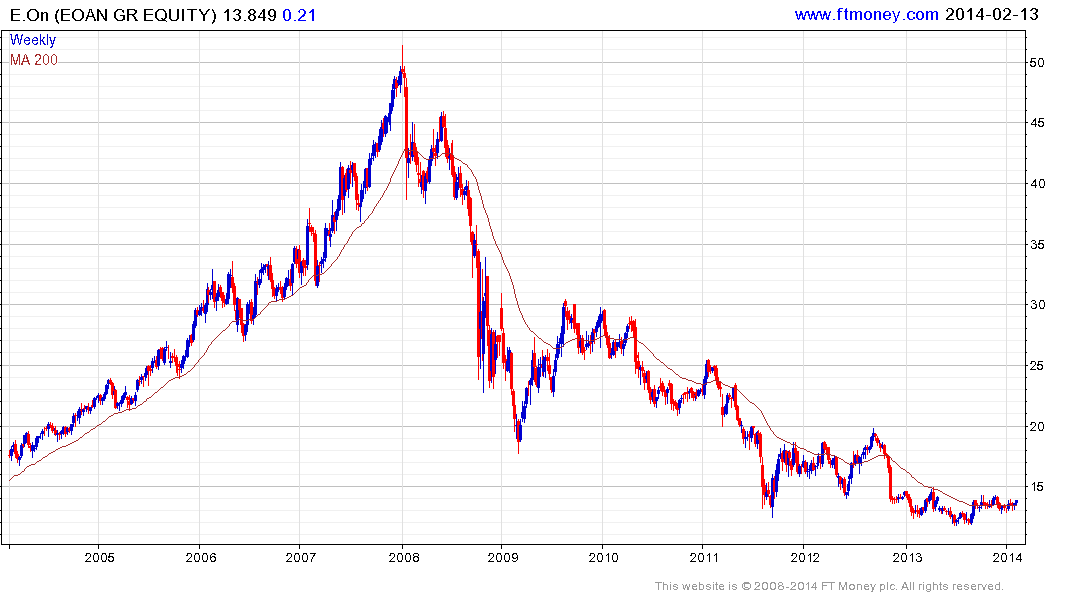 The German utility sector has received a lot of negative press since it has been burdened with regulatory obligations to implement the German government’s environmental aspirations. However, both EO.N and RWE are forming first steps above their bases. EO.N still has a yield of 7.94%.