U.S. stocks fell, giving the Standard & Poor’s 500 Index its first 5 percent slide since May, as a gauge of manufacturing in the world’s largest economy declined more than estimated.

“Everyone walked in this year expecting a continuation of at least growing economic activity and the latest data we’ve been seeing throw a bit of cold water on that theory,” Bill Schultz, chief investment officer who oversees about $1.1 billion at McQueen Ball & Associates in Bethlehem, Pennsylvania, said by phone. “Economic activity was not as strong as people expected. People are taking a pause, reassessing where they stand.”

I would not be surprised if Janet Yellen, who was sworn in as Fed Chairman today, had a few qualms about slow GDP growth, despite recent evidence that confidence has improved somewhat.  Ben Bernanke’s secondary intention, after preventing an economic collapse, was to reflate the US economy into a faster rate of recovery than we have seen following previous credit crisis recessions.  He achieved the first goal but the latter one remains elusive.

Meanwhile, Wall Street is extending its reaction from an overbought and overextended condition registered in 4Q 2013, in which valuations for leading shares became more expensive than we have seen since at least 2007.  Some presumably overenthusiastic and perhaps overleveraged institutional investors have pointed out that the market has been considerably more overvalued in earlier cycles and that low interest rates partly justified the yearend valuations.

That is a rationalisation, in my opinion.  The point is, valuations for a considerable number of US shares went from low levels in late-2008 and early-2009, to considerably above average p/e ratios at yearend 2013.  Moreover, many of the earnings reports that we see have been flattered by share buybacks at a time when corporate revenue was declining because of slow global GDP growth. 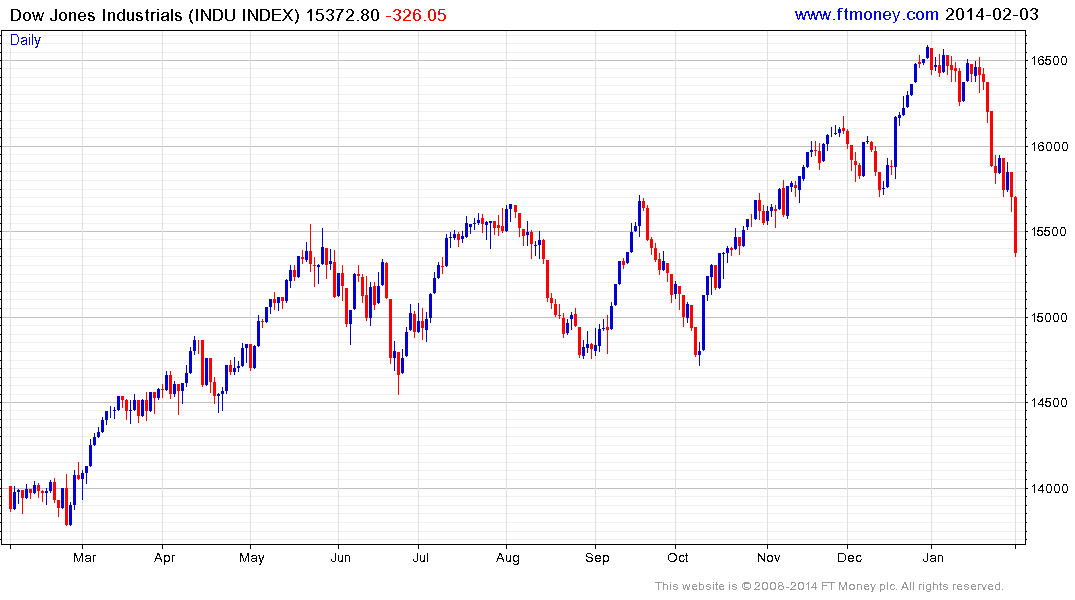 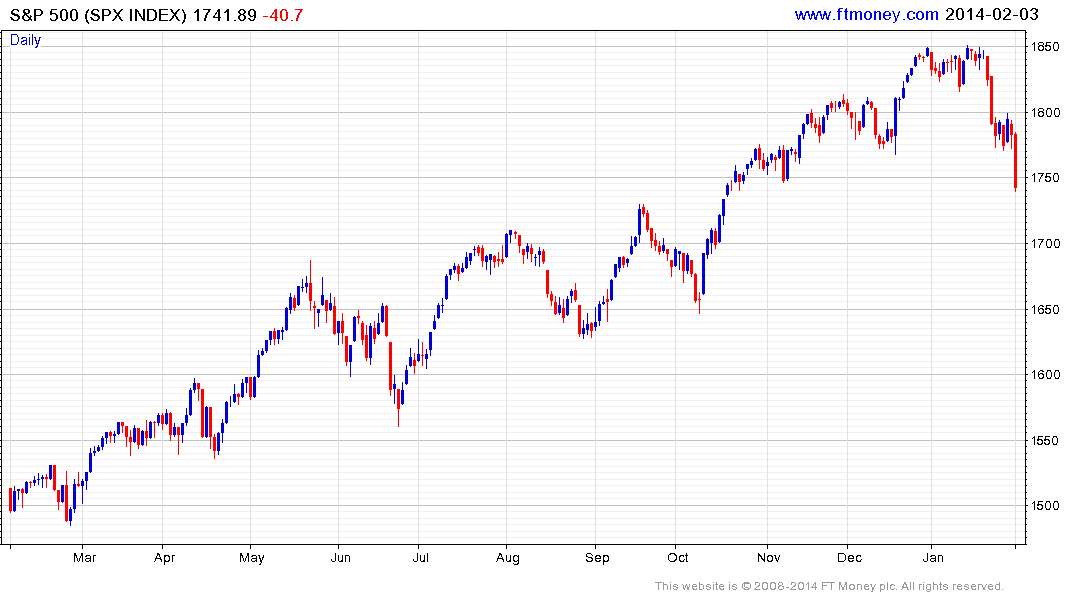 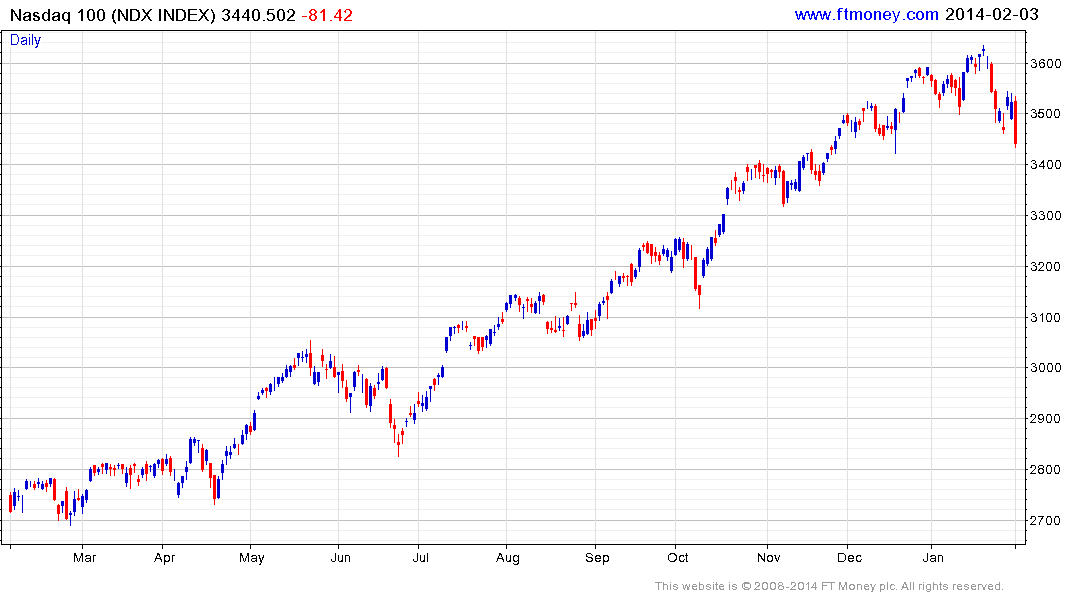 Given the overvaluations, this year’s bearish January affect following five consecutive gains during the first month of the year between 2009 and 2013, and the onset of QE tapering, suggests that this pullback since the Dec-Jan highs has every chance of being at least a medium-term correction for Wall Street, unless Janet Yellen rides to the rescue by halting and perhaps even reversing QE tapering.  She has that option, although I do not think it would be well received beyond an immediate short covering rally.

Japan is still likely to be an outperformer this year, thanks to its monetary tailwind and increasingly pro-growth policies, despite energy problems.  However, the Nikkei 225 has not been able to complete its first consolidation above the base, evidenced by the failed break above 16,000 and return to the 200-day MA that we are likely to see on Tuesday.  A sustained push back above 15,000 is required to signal that this is only a temporary pullback.  The TSE2 Index remains firmer but needs to find support near 3500 to sustain January’s upward break.  The Yen has firmed from 105.5 against the US Dollar to 101, providing a temporary headwind for Japan’s stock market. 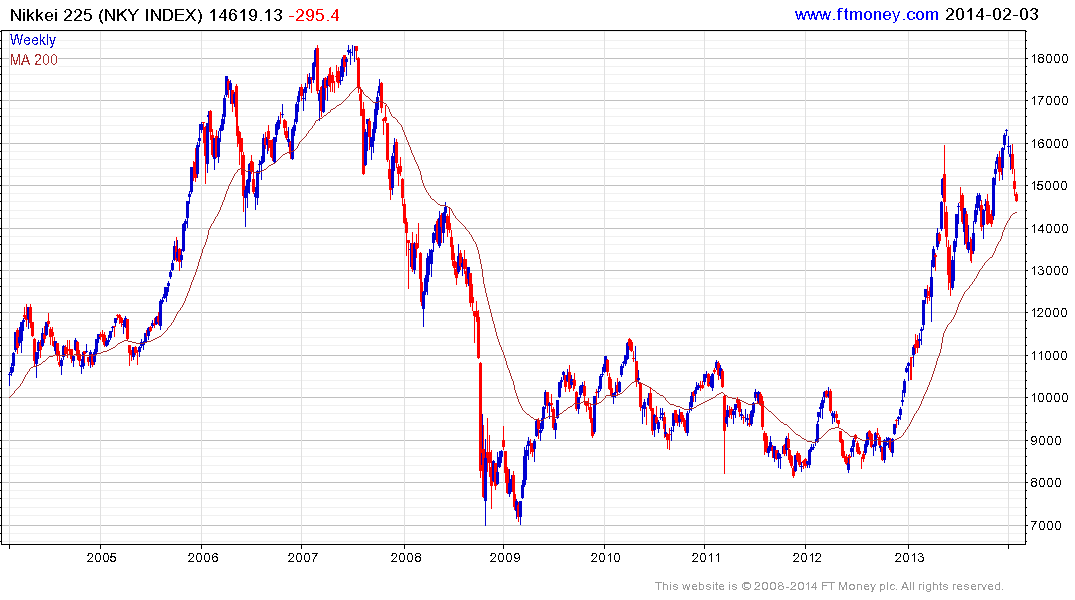 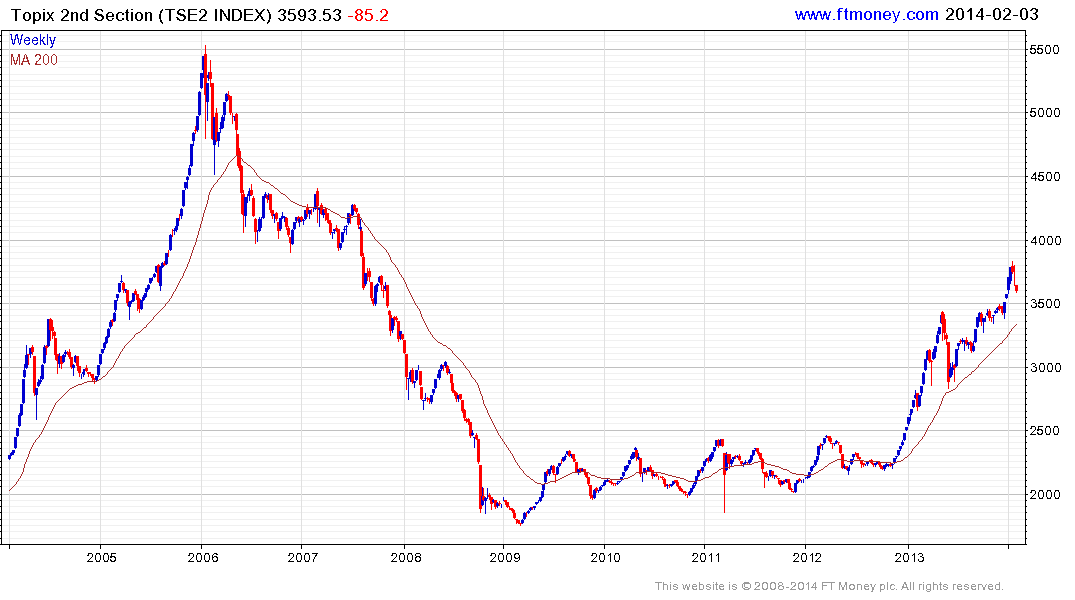 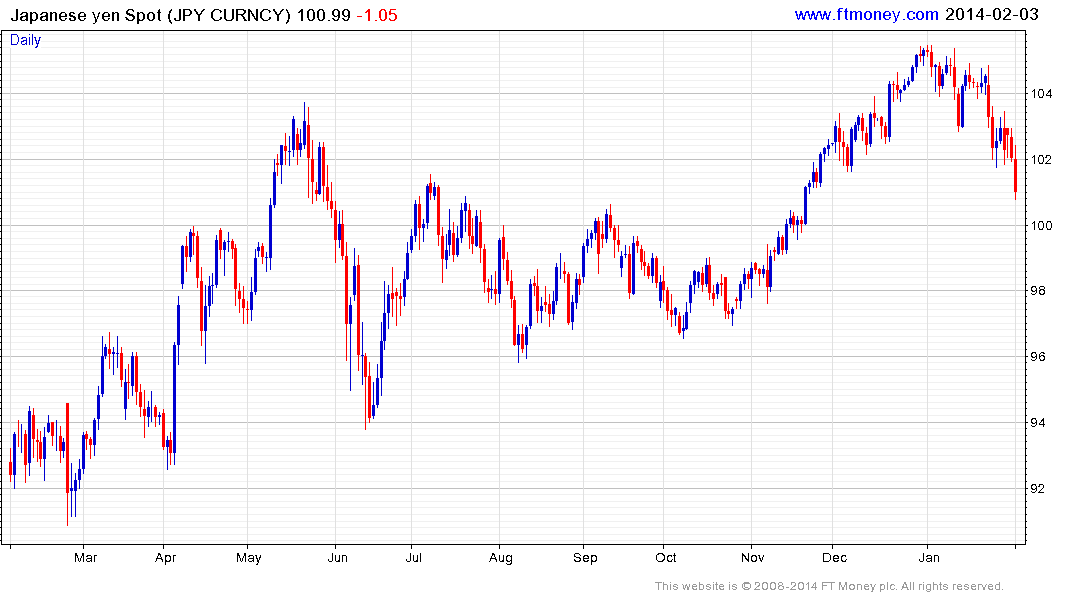