Economy in U.S. Grew 3.2% as Consumer Spending Picked Up
Comment of the Day

Economy in U.S. Grew 3.2% as Consumer Spending Picked Up by David Fuller

The U.S. economy expanded at a 3.2 percent pace in the fourth quarter as Americans’ spending climbed the most in three years, laying the ground for further improvement in 2014.

The annualized gain in gross domestic product matched the median forecast in a Bloomberg survey and followed a 4.1 percent advance in the prior three months, Commerce Department figures showed today in Washington. Growth in the second half of the year was the strongest since the six months ended in March 2012. Consumer spending, which accounts for almost 70 percent of the economy, rose 3.3 percent, less than estimated.

The pickup in demand allowed the economy to overcome cutbacks in government outlays caused by the partial federal shutdown in October. Diminishing fiscal challenges and progress in the labor market will probably sustain consumer and corporate demand in 2014, helping explain why the Federal Reserve decided yesterday to keep paring stimulus.

“There is a fair amount of strength in the economy,” said Nariman Behravesh, chief economist at IHS Inc. in Lexington, Massachusetts, who was the second-best U.S. forecaster of the economy the past two years, according to data compiled by Bloomberg. “Consumer spending is on solid ground. We’re seeing other engines of growth picking up -- capital spending is rebounding, exports are up.”

Consumer and corporate confidence are now the keys to gradually improving GDP growth from here on.  It should improve for the most part, albeit not exponentially as the problems created by credit crisis recessions linger for more than five years.  Nevertheless, the USA has some stunning advantages; not least its very competitive energy costs, thanks to fracking.  Moreover, in this exciting era of visibly accelerating technological innovation, the USA is often at the forefront of new discoveries and commercial breakthroughs.

What about the January effect?

After four consecutive Wall Street gains in January, the first month of 2014 has broken that sequence. This is likely to have some effect on investor confidence, although hopefully not severe for the USA and other leading economies.  FT Money, having been bullish since 1Q 2009 given the evidence of base formations and subsequent uptrends, gradually became more cautious as 2013 developed.  First, a few of the early leaders among share indices peaked last May, as I discussed again on Wednesday.  Then Wall Street surged in 4Q, leading to excellent 30% plus yearend gains for US indices and a few other leading stock markets.

Although I have not sold any of my personal long-term investment holdings, rising valuations and slowing revenues justified some caution as 2014 commenced.  Additionally, some investors were likely to have delayed taking short-term profits until the New Year.  We also knew that QE tapering was commencing in December 2013 and we have now had the second $10 billion reduction.  Since QE had been such a bullish stimulus, it would be naïve to think (hope) that tapering would be a non event for stock markets.

Nevertheless, there are few grounds for bear markets where monetary tailwinds remain positive, and that includes the USA even though this tailwind is diminishing.  The Fed has promised that short-term rates will remain extremely accommodative.  No tapering is in sight for Japan and Europe.  The biggest known outside risk for the global economy remains a spike in the price of crude oil as we last saw in mid-2008.  However, that risk will diminish with time, if more countries embrace fracking and invest in rapidly improving solar power rather than windmills. 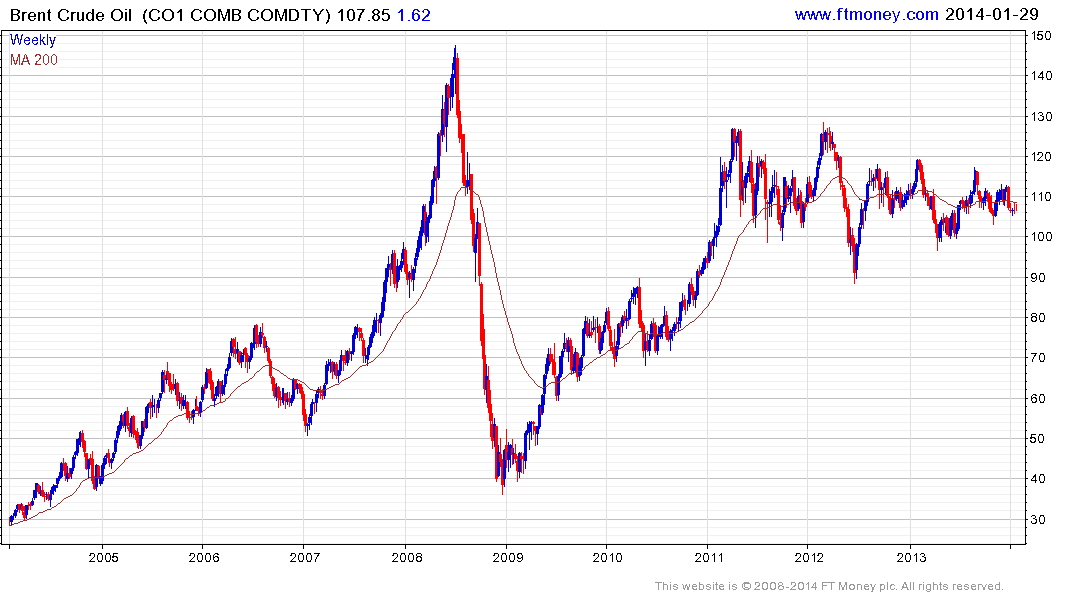 I think we will continue to see volatile stock market conditions, as has certainly occurred this month, particularly on an intraday basis.  This is partly due to uncertainty which is exacerbated by high-frequency trading.  Additionally, there are obvious limits to p/e ratio expansion which is the worst reason for buying shares.  Nevertheless, there will be buy-low-sell-high opportunities and many corporate Autonomies will continue to considerably outperform their home economies in terms of growth.

Presently, we have some short-term oversold conditions which you can see on the Stochastics indicators but Wall Street has lost some of its uptrend consistency this month and too many high-flying shares are on somewhat pricy valuations.  I do not think this current correction is over and it could easily exceed 10% for US indices.  My long-term Friday Audios have talked about several years of choppy activity during which valuations generally improve along with GDP growth First, a few of the early leaders among share indices peaked last May, as I discussed again on Wednesday, prior to commencing the next secular bull market before the end of this decade.  I think we have now entered this phase for Wall Street and some previously fashionable emerging markets saw at least lengthy medium-term highs a little over six months ago.