Asian stock and currency market review
Comment of the Day

Shinzo Abe won the December 2012 Japanese general election in a landslide, by promising to do whatever was necessary to kick start growth. One of his primary policy initiatives was to weaken the Yen in order to boost the competitiveness of Japanese exporters and to promote consumption. The Yen had already weakened in anticipation of his election victory and weakened further as he followed through on his promises. 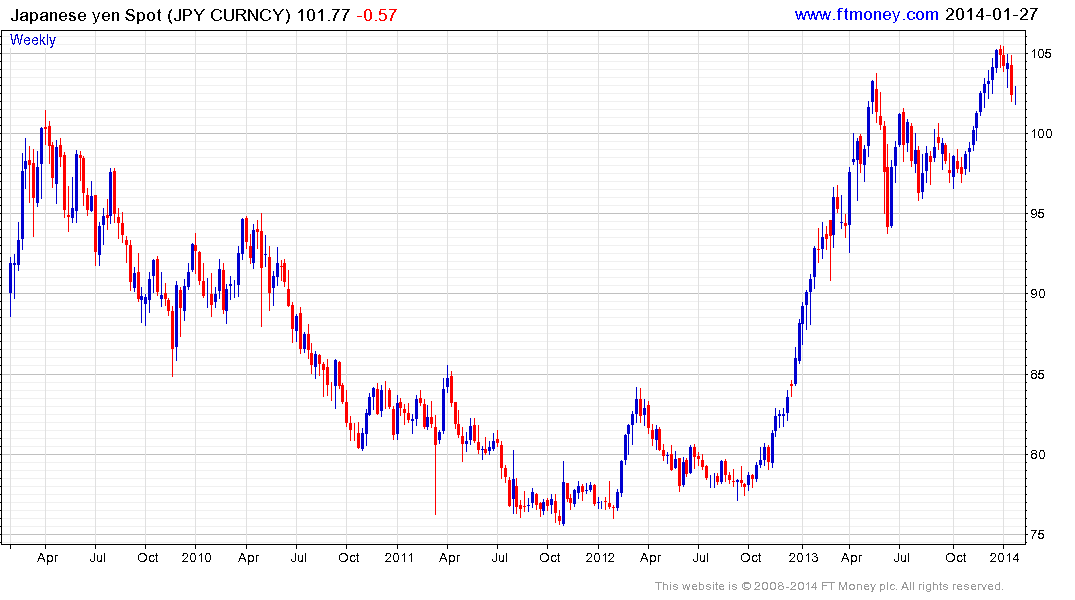 This raised a number of issues for Japan’s neighbours, which compete in the same export markets. Many have also resorted to currency devaluation as a way of maintaining their competitiveness. From the perspective of foreign investors who had become accustomed to both capital market and currency appreciation over the last decade this development has resulted in higher volatility in Asian investment vehicles.

The US Dollar has base formation characteristics against the Taiwan Dollar. While it is somewhat overbought in the very short-term, a sustained move below the 200-day MA would be required to begin to question medium-term scope for additional TWD weakness. Against this background the TAIEX Index is unwinding a somewhat overbought condition relative to the 200-day MA. A break in the more than yearlong progression of higher reaction lows would be required to question medium-term potential for additional higher to lateral ranging, In US Dollar terms, it still has a reasonably similar pattern. 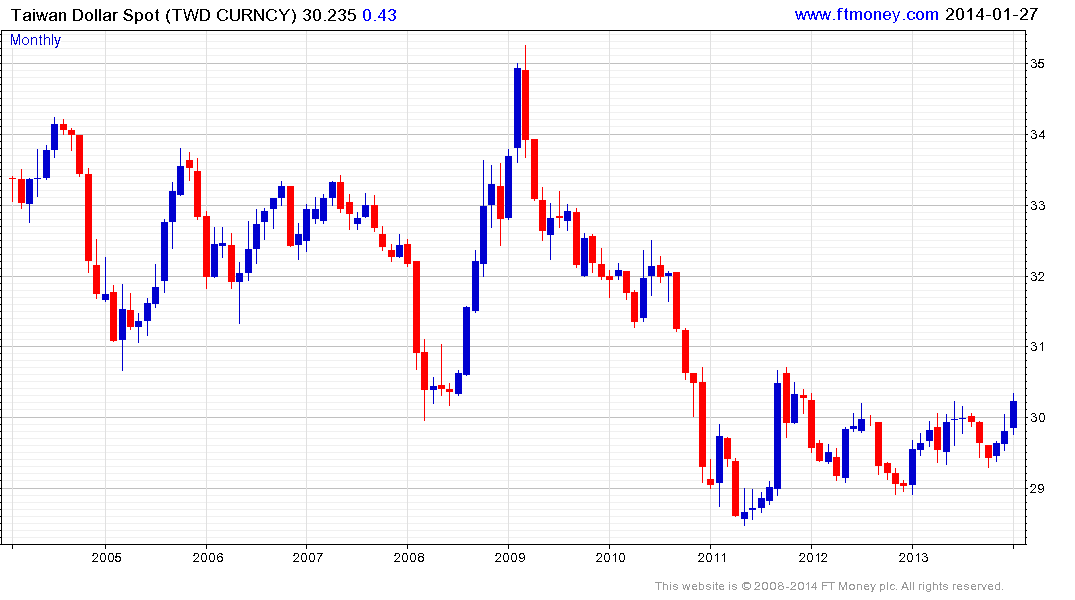 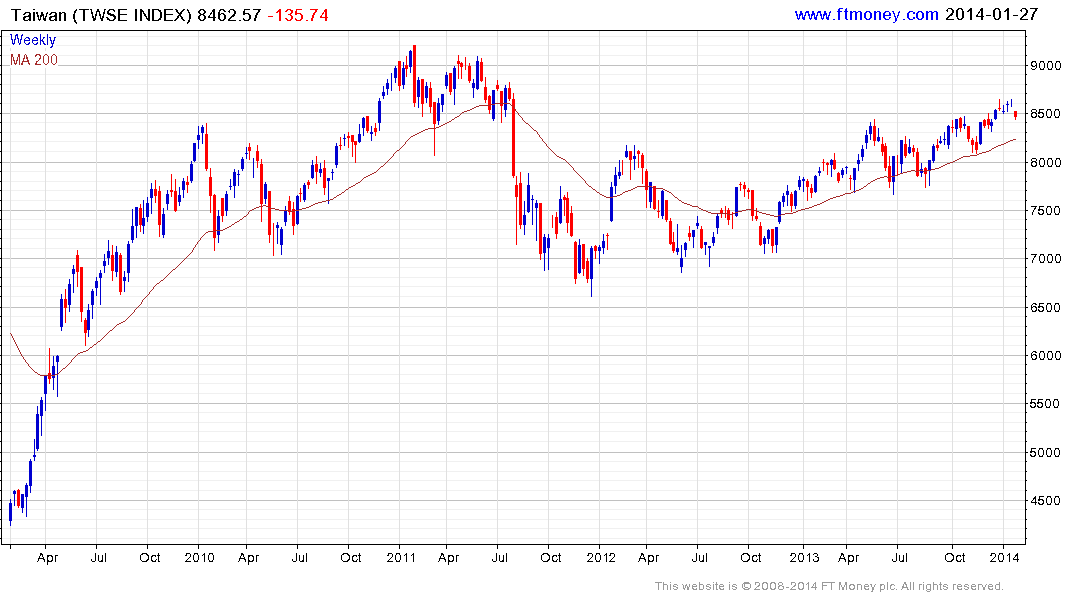 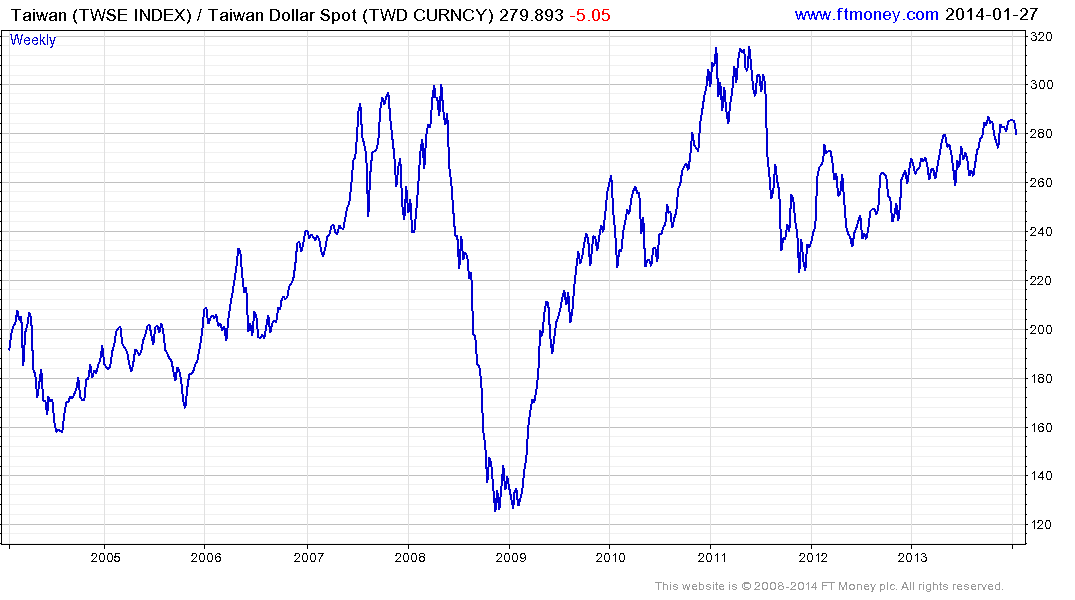 The Korean Won had been conspicuous for its relative strength but the US Dollar found support this month in the region of the 2013 and 2011 lows and a sustained move below KRW1050 would be required to question potential for additional US Dollar strength. The Kospi Index encountered resistance at the upper side of its more than two-year range from late October and continues to trend towards the lower side. The Dollar denominated Kospi chart has until recently outperformed somewhat. but this is unlikely to persist considering the potential for Won weakness. 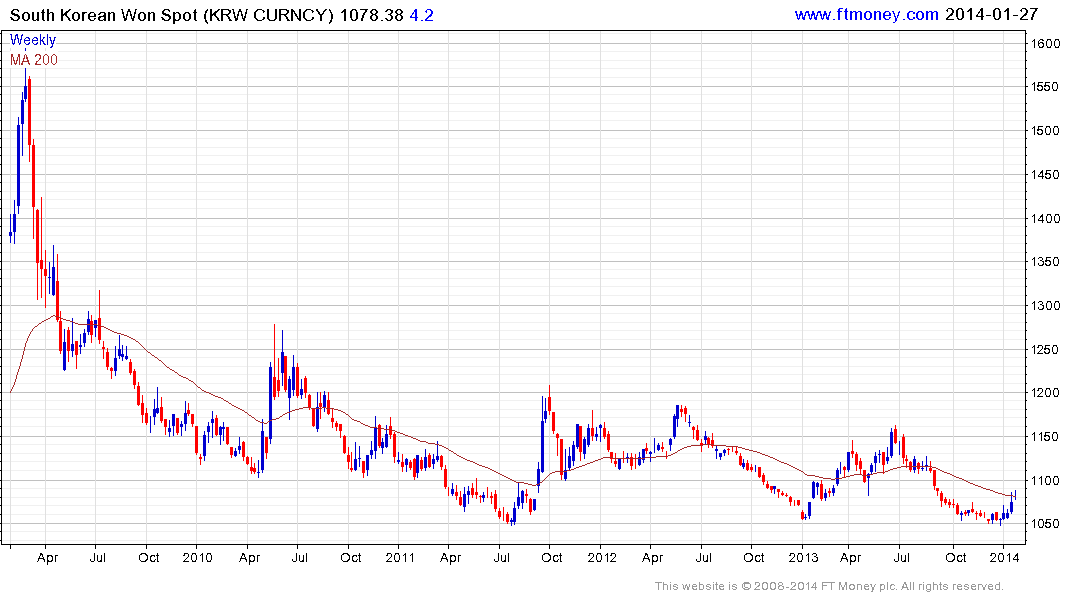 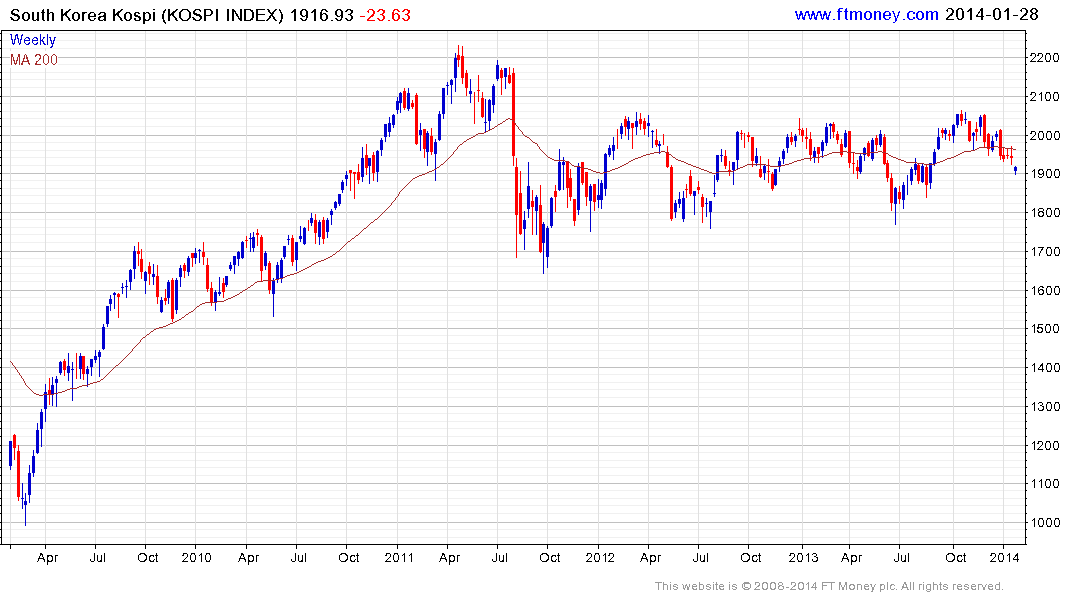 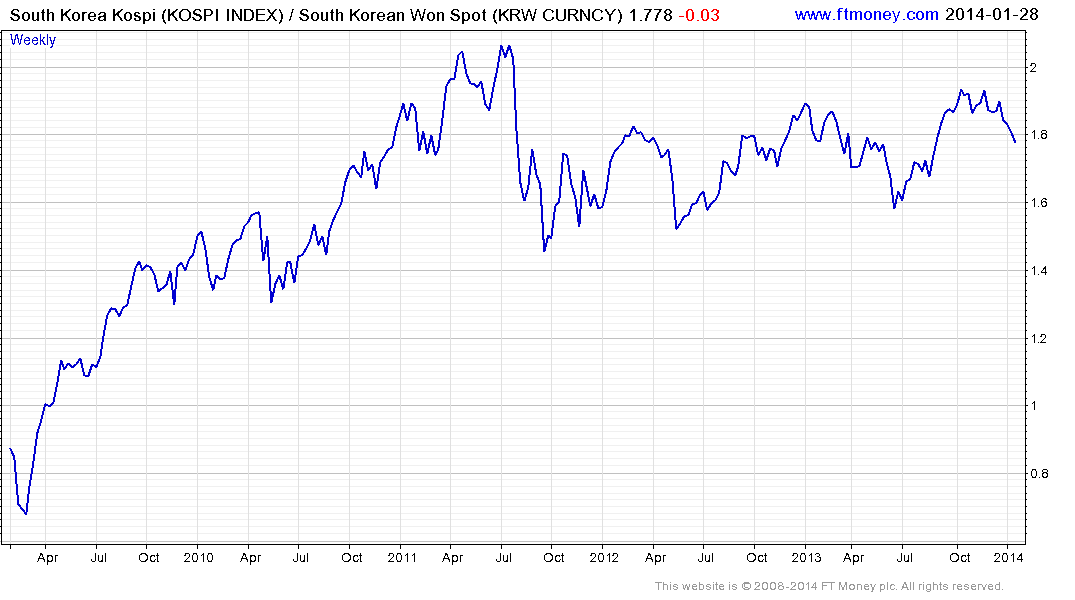 The US Dollar failed to sustain its breakdown to new lows against the Thai Baht in March 2013 and quickly rallied back to test the upper side of the overhead range. It found support in the region of the 200-day MA from October and while somewhat overbought in the very short-term, a sustained move below the trend mean, currently near THB31.5, would be required to question medium-term scope for additional upside. The SET Index lost momentum from March, failed to sustain the move to new highs in May and continues to hold a medium-term progression of lower rally highs. In US Dollar terms, the Index broke to a new low today. 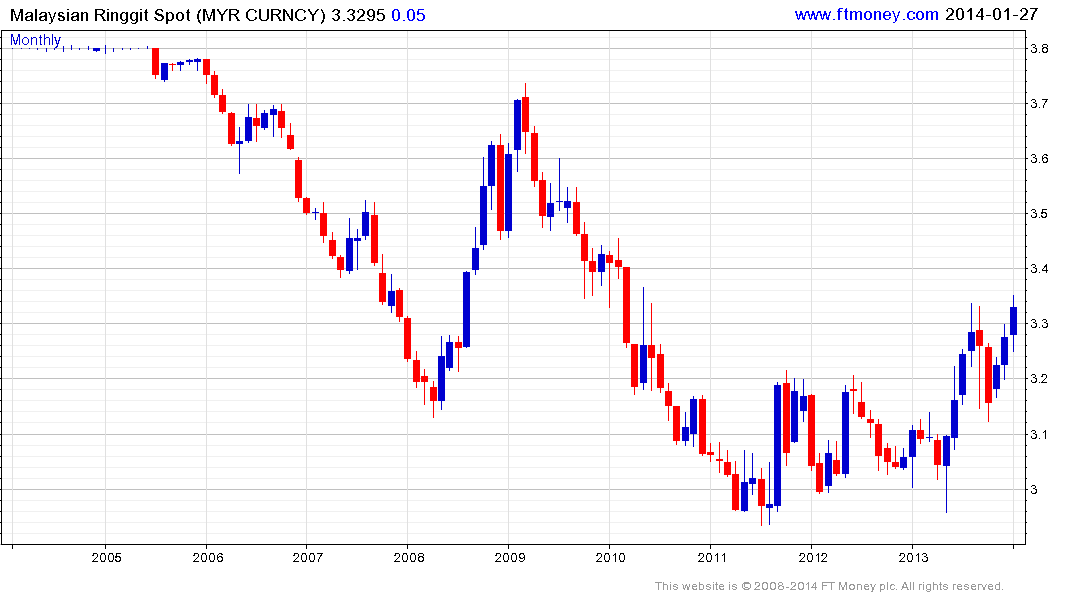 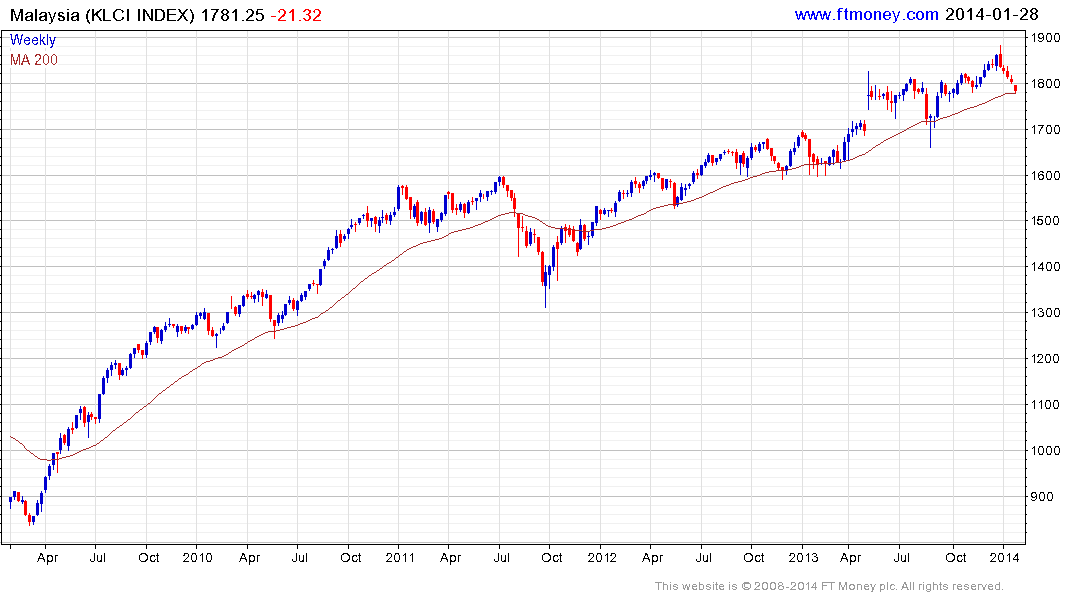 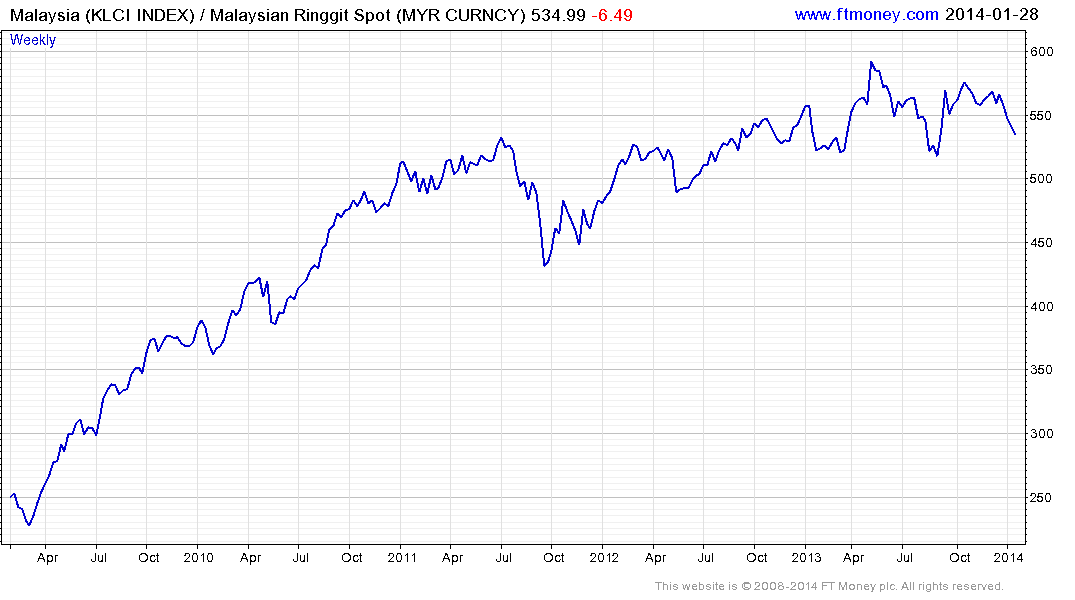 The Malaysian Ringgit has a similar pattern to the Thai Baht above, with the US Dollar completing a two-year base in July. The Malaysian market has been a notable outperformer in local currency terms over the last year but has pulled back sharply this month to test the region of the 200-day MA. It will need to find support if the medium-term uptrend is to continue to be considered consistent. In US Dollar terms, the Index’s performance has been more rangebound over the last year. 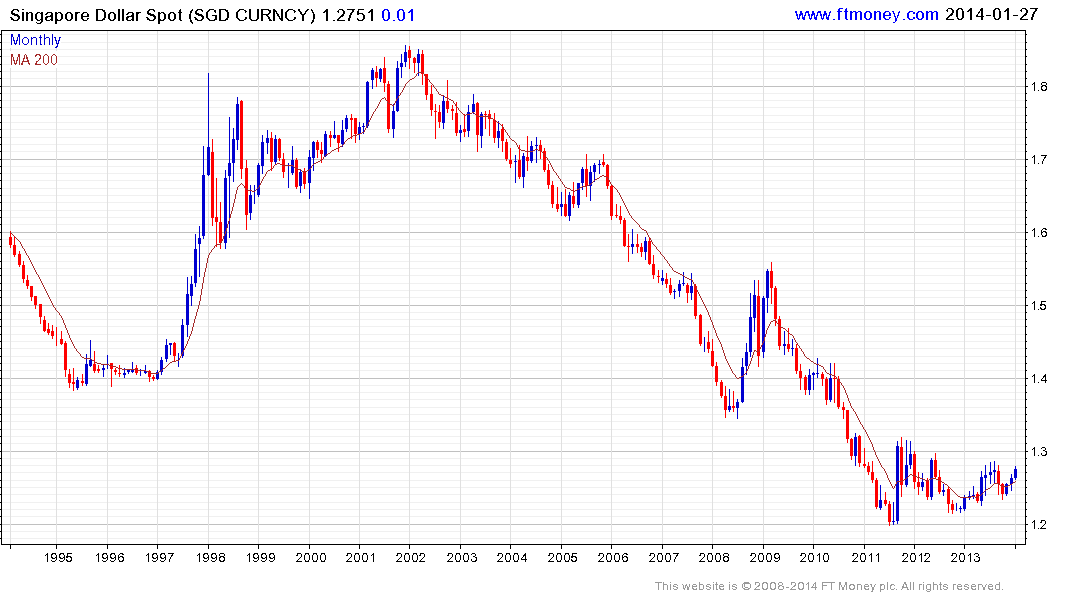 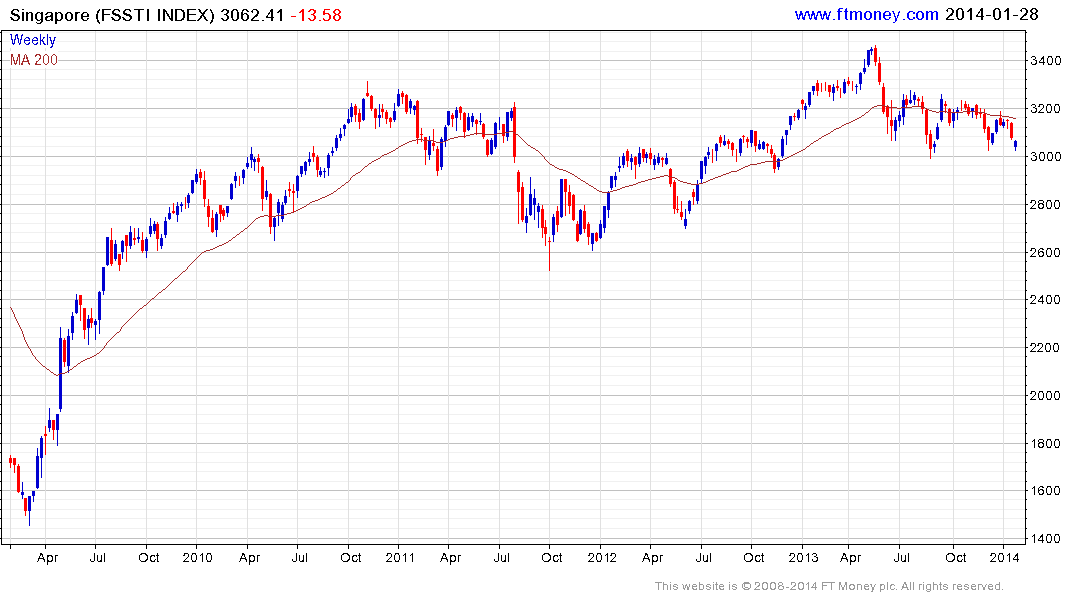 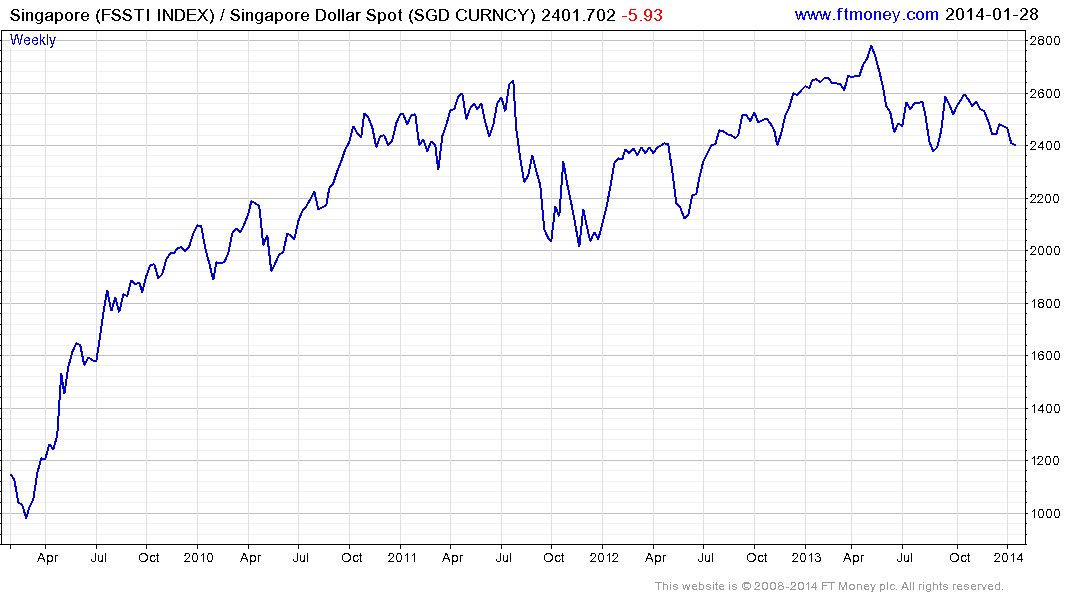 Following a decade long decline, the US Dollar now has base formation characteristics against the Singapore Dollar, The FTSE/STI Index found at least short-term support today in the region of the lower side of its six-month range but will need to continue to hold above 3000 to offset current scope for an additional test of underlying trading. The US Dollar denominated chart has a broadly similar pattern.

The charts indicate that the US Dollar either has base formation characteristics or has already completed bases against a substantial number of Asian currencies. This suggests that Asian currency market appreciation is unlikely to be as powerful a tailwind for foreign investors in future as it has been in the last decade.