My personal portfolio by David Fuller

When the US stock market was weak this afternoon, I placed a marginally in-the-money stop to protect my US Tech 100 Index short which I had opened on Friday 24th Jan, at 3527.3 for the March contract.  I placed the stop when the contract was below 3490 in this volatile market and it rallied just enough to trigger that stop at 3525 this evening, just before weakening again.  These prices include all spread-bet dealing costs.  Before that stop had been triggered I also opened a second short in the March contract this afternoon at 3490 when it was 16-points off the day’s low.

Trading can be frustrating, as I have said before, and it is important to keep leveraged risks under control, with a combination of small initial positions and, hopefully, judiciously placed stops.  That can be a matter of luck, at least as often as skill, but discipline keeps one in the game.  These days, I think of myself as primarily a long-term investor but when I trade, I try to do it on a medium-term basis because I do not want to be watching the screen all day.  However, my recent hedging attempts would have been far more successful if I had just taken the small profits when available, rather than using a breakeven stop when looking for a correction.  Hedging in anticipation of the next 10% plus correction is tricky in terms of timing because when it becomes obvious, it can be mostly over if it is just an overdue reaction.

I do think that we are seeing the beginning at least a 10% correction on Wall Street and if so that will obviously have implications for most other stock markets.  Eoin and I published a number of short-term bearish comments, articles and indicators last week, which I hope you saw.

Additionally, consider the so-called ‘January affect’.  The previous four Januarys were bullish, setting a positive tone for the year.  This one is bearish, assuming that a strong rally does not occur over the next four days.  If this January ends as a down month on Wall Street, as I expect, it will further dampen the euphoric yearend sentiment.

Tactically, veteran subscribers know that the best time to sell long positions, if inclined to do so, is when they are overextended to the upside relative to their 200-day moving averages.  Corrections can be frightening because markets usually fall faster than they rise.  However, given the accommodative monetary policies that are still underway, including in the USA despite the onset of QE tapering, the worst time to sell is when markets have already reacted sharply and the crowd is frightened.  That is the time to look for buying opportunities. 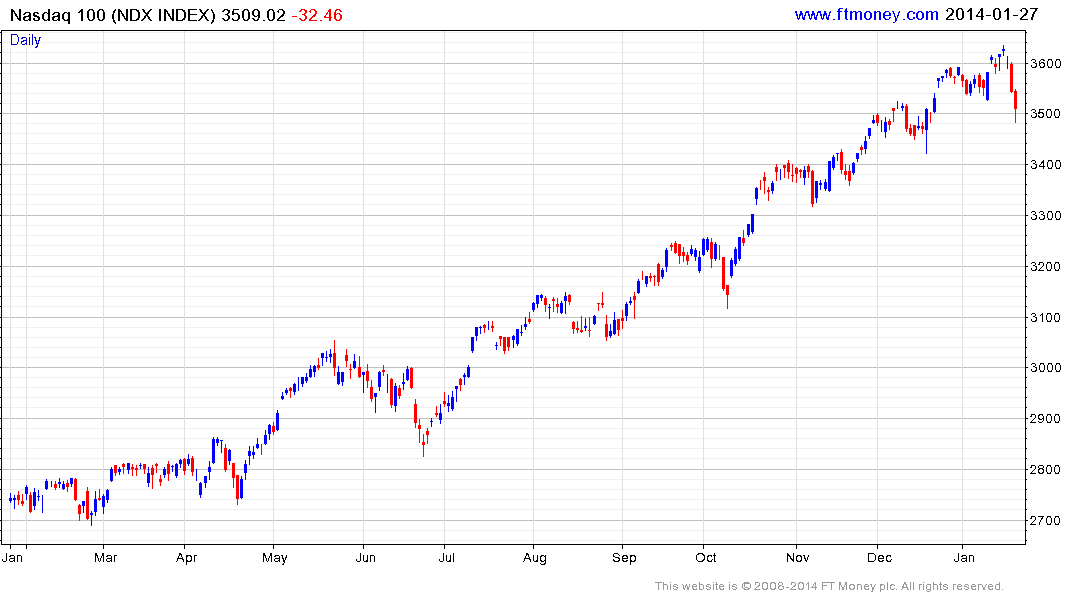