The Bull Market Ends (or Is It Just a Correction?)
Comment of the Day

The Bull Market Ends (or Is It Just a Correction?) by David Fuller

We awoke this morning to see futures deep in the red. Over the past two weeks, markets seem indecisive, unable to make much progress. Lots of days began with positive trades, only to roll over and fall into losses. Several days that began in the red closed negative, though usually off their worst levels. Last week’s big ugly Monday is still fresh in many traders’ minds.

Might this be the start of the long-awaited, overdue correction?

There certainly have been plenty of catalysts that could hasten a 10 percent drop or worse. Earnings season has begun rather inauspiciously. There have been several high profile disappointments -- IBM, Best Buy, Intel and Citigroup come to mind.

On the other side of the world, China is slowing, with January manufacturing Purchasing Managers' Index falling to a 6-month low and breaking 50 (49.6). New orders, exports, employment and backlogs all showed declines. On top of that, HSBC reports that China continues to face a cash shortage within its financial system (why does that sound so familiar?).

All this takes place against the backdrop of the U.S. Federal Reserve taper. The first step toward removing the bond-buying program was put into place last month, with the next step possibly coming as soon as the two-day Open Market Committee meeting next week. An unusually accommodative monetary policy is beginning to come to the natural end of its unnatural life. Indeed, the degree of stimulus has been so enormous that it might take three full years or even longer to fully unwind it. Congress has exhibited no interest in post-recession fiscal stimulus -- unlike in prior recessions -– so perhaps the FOMC ‘s slow withdrawal is a mixed blessing.

Investors know that the Federal Reserve’s extraordinarily accommodative monetary policy tailwind from QE has entered a tapering phase.  I would not describe this change as tightening but it probably ends a period of - ‘this is as good as it gets’ - in terms of Fed support.

International investors also know that most stock markets which bottomed ahead of Wall Street in 4Q 2008 have already experienced significant corrections, as we can see from Indonesia, Thailand and The Philippines. 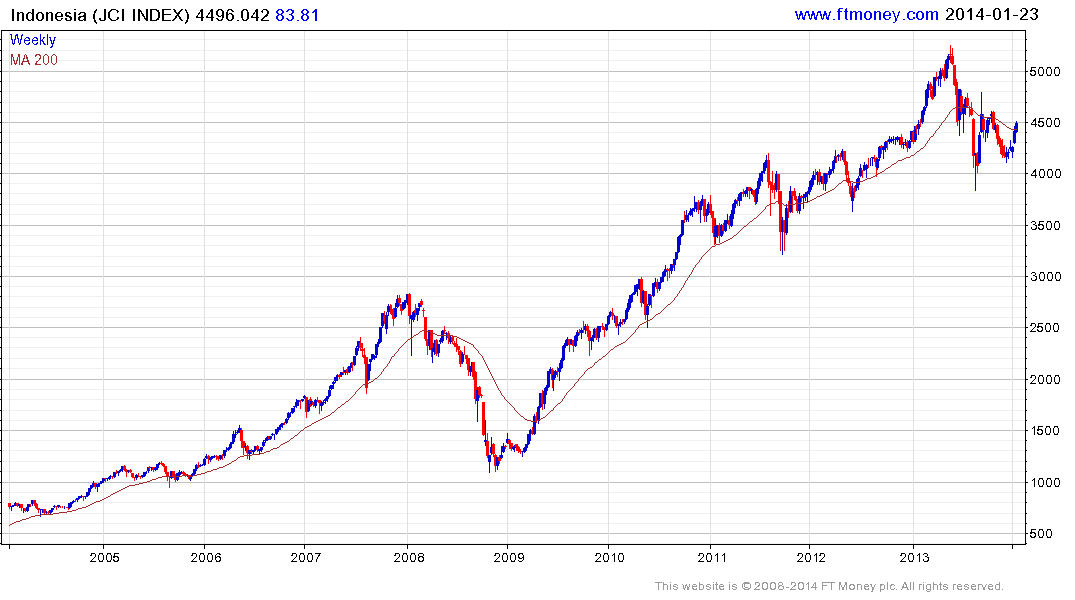 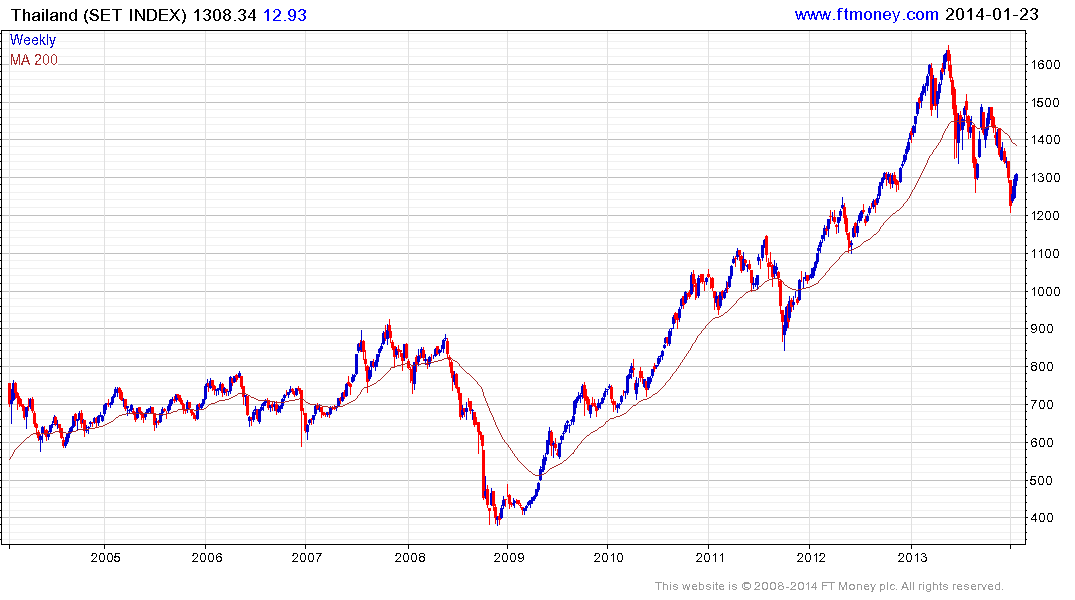 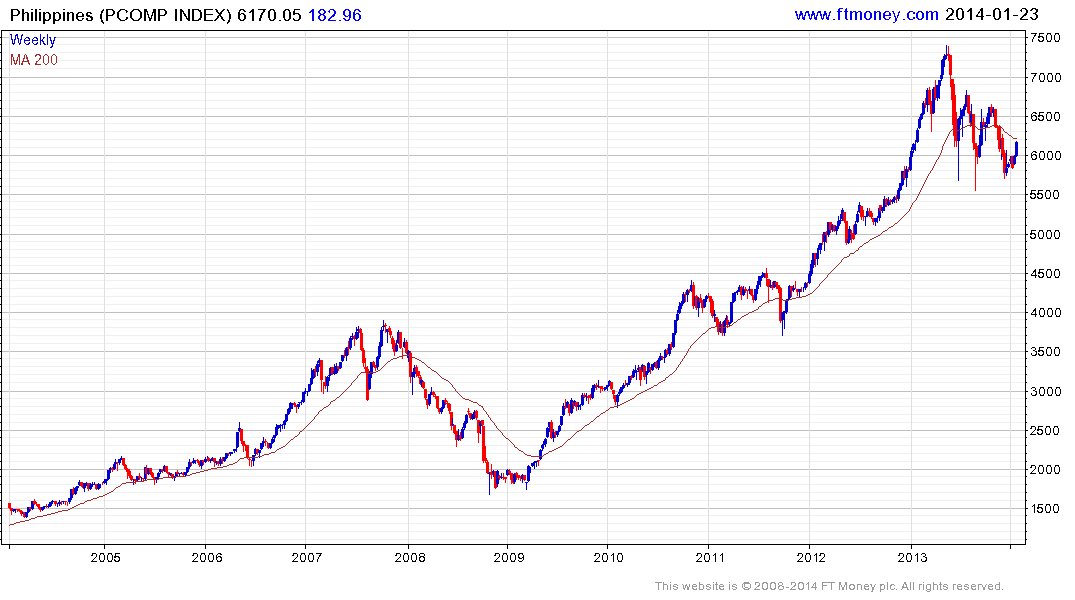 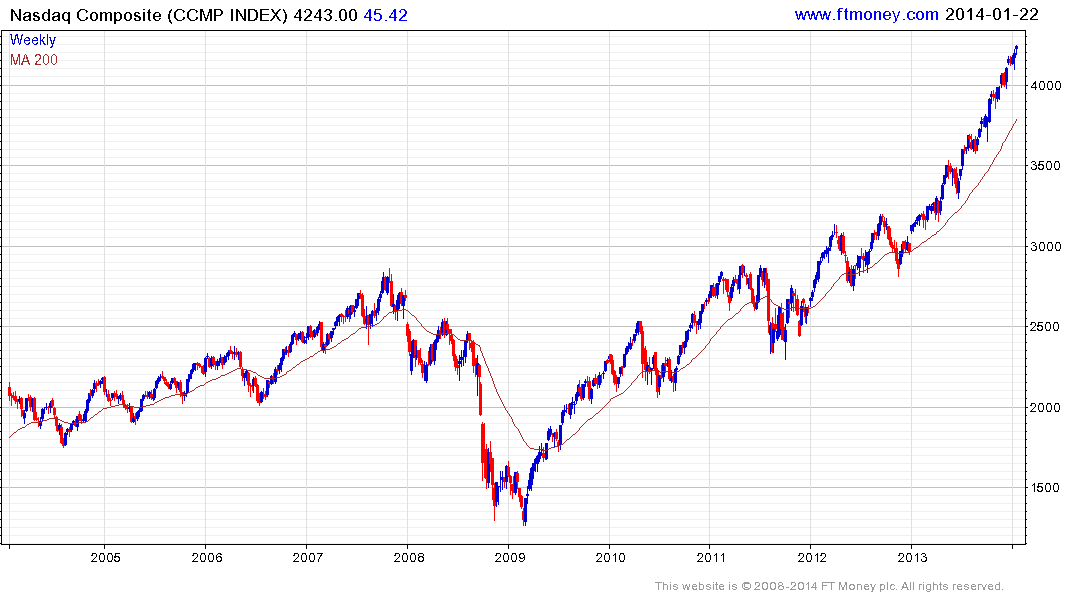 Can today’s superior performance of the Nasdaq be attributed to American exceptionalism?  It is an emotive description, but yes, in terms of technological innovation.  Additionally, the USA has the considerable advantage of competitive energy prices thanks to fracking.  Also, the US Dollar became much stronger relative to the Indonesian Rupiah, Thai Baht and Philippine Peso in 2013.  Currency weakness usually drives international investors away. 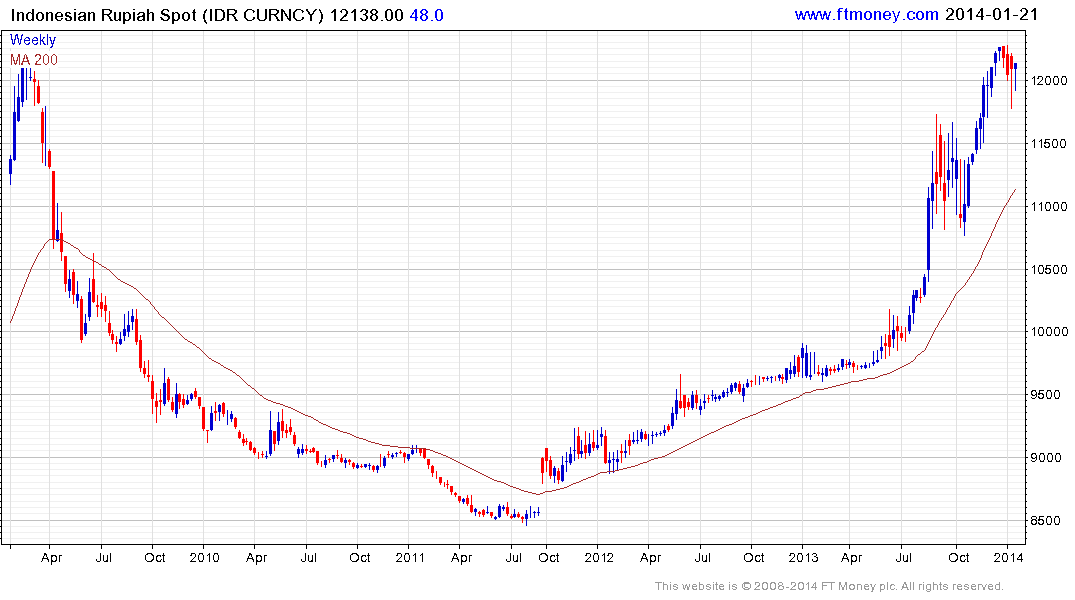 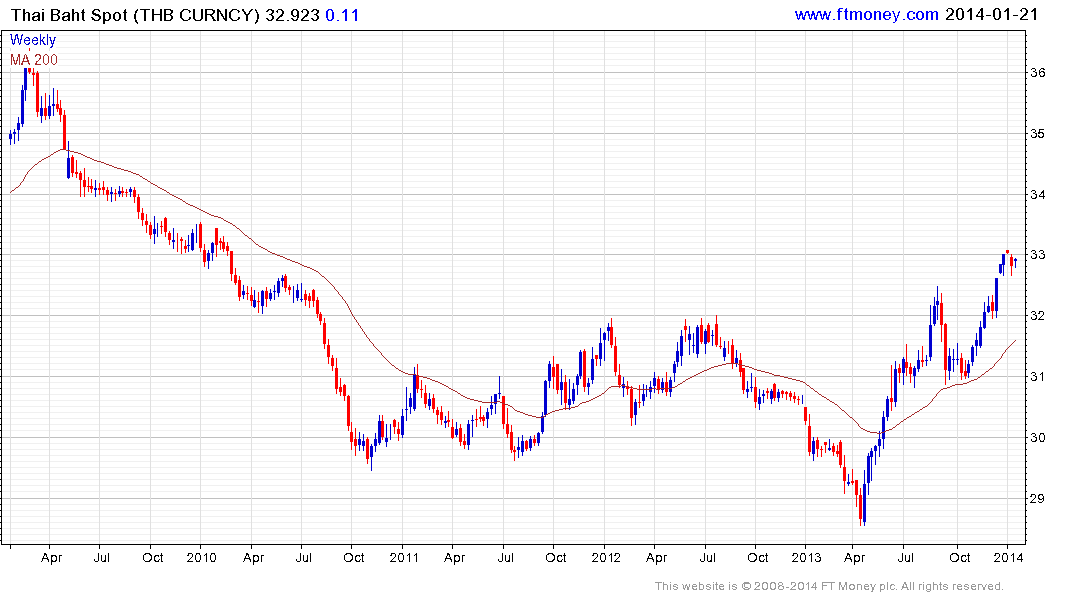 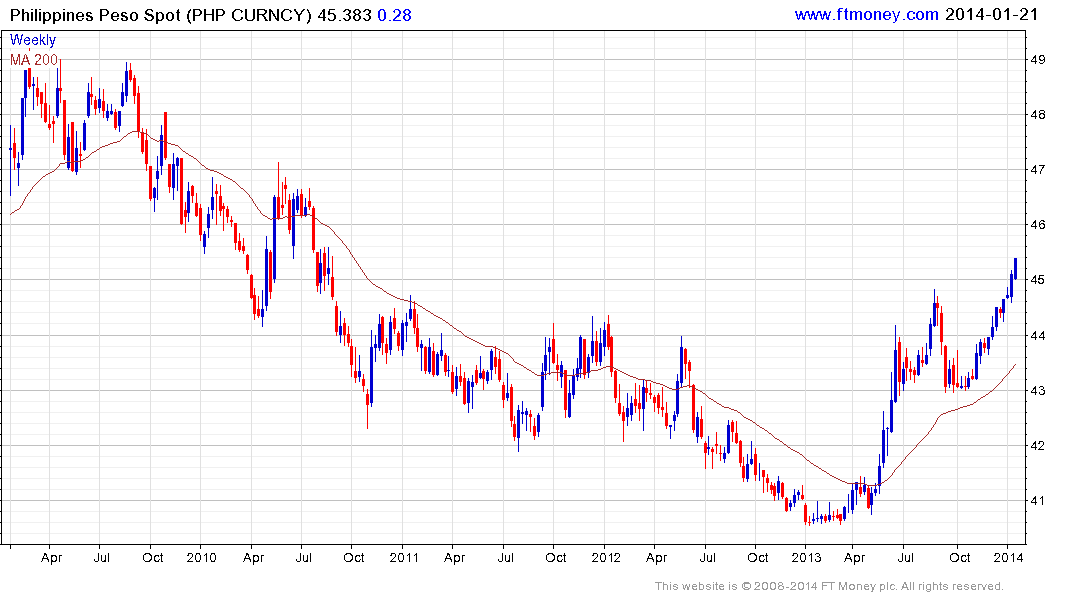 Nevertheless, the USA’s current advantages, real and perceived, have been at least partially discounted by today’s valuations.  Paradoxically, if the global economy continues its gradual and somewhat choppy recovery, as I expect over the medium to longer term, recovering confidence will lower the USA’s safe haven appeal.

Technically, the US stock market remains a little overvalued on a relative basis and it is also somewhat overextended relative to 200-day MAs.  However, markets can sometimes remain overbought for the lengthy medium term, as we have seen before.  Uptrends for the US stock market indices, including the S&P 500, remain consistent although today’s weakness prompted the article above and my own comments which are not dissimilar in outlook. 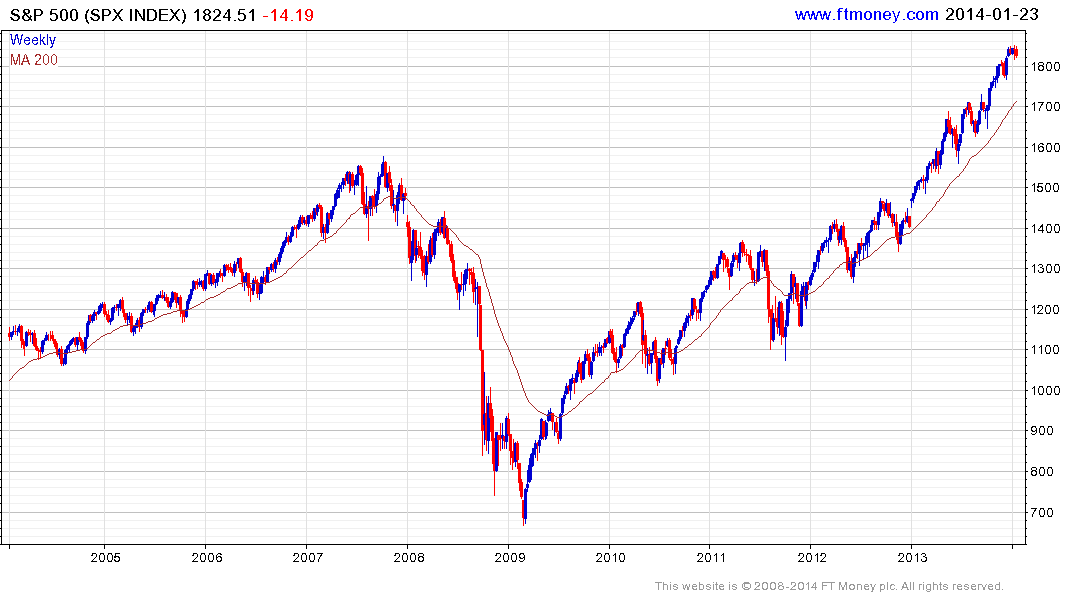 A mean reversion correction is overdue.  However, to state the obvious, while more money is flowing into US equities than is coming out, the indices will move higher.  How high is too high is a technical question.  Recently, the occasional sharp downward day has had no follow through.  Today is a warning shot across the bows but if Wall Street recovers most of the losses tomorrow, bulls will feel reassured.  A break in the uptrend consistency shown on leading US indices remains necessary to frighten investors.

In conclusion, I am cautious about US equities in the short to medium term, but very bullish on a longer-term basis.  Please note: this is frequently discussed in Friday’s Big Picture Long-Term Audios.

← Previous article Print this Item Email this article
Back to top