Canadian Oil Sands: Getting The Facts Straight
Comment of the Day

Canadian Oil Sands: Getting The Facts Straight by Eoin Treacy

Fincom claims that COSWF is a high-cost producer. Yet, the company reports its cost per barrel of $41.48 CAD. How does this compare with, say, oil shale producers in the Bakken?

From a recent Reuters article:

Wood Mackenzie has an overall Bakken break-even price of $62 a barrel at current well costs, Garrett said. But for high-quality parts of the formation such as the Parshall and Sanish fields, that number goes down to the $38-$40 range.

While producers can break even at just below $40 a barrel in most places, the Bakken needs prices in the $80-$85 range to attract capital from other shale areas.

The evolution of the USA's domestic oil and gas production represents a significant challenge for Canadian energy producers not least in securing markets and transportation networks for their output. However the fact that any commodity tends to trade at the marginal cost of new production suggests that the Canadian oil sands are likely to remain economically viable resources for the foreseeable future. 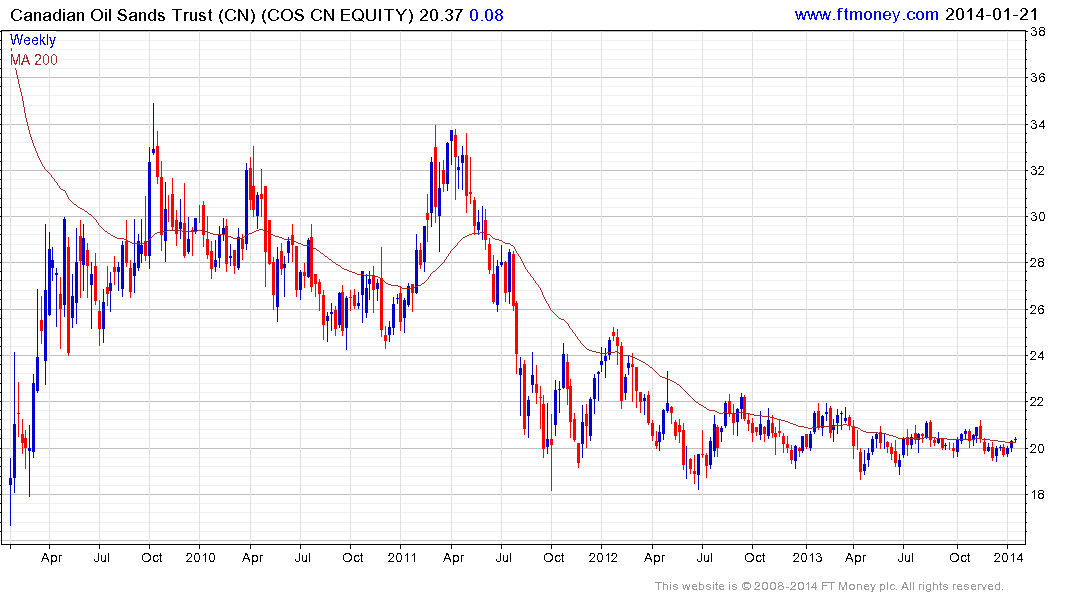 Canadian Oil Sands has an Estimated P/E of 11.8 and yields 6.82%. The share has been confined to a tight base since 2011; trading above $18. It is currently rallying from the most recent test of the lower side of the medium-term range and a sustained move above C$21.25 would confirm a return to medium-term demand dominance.