JPMorgan, the biggest U.S. bank by assets, said in July it plans to get out of the business of owning and trading physical commodities ranging from metals to oil. Morgan Stanley cut 10 percent of its workforce in the commodity division last year and agreed to sell its global oil business to OAO Rosneft, Russia’s largest petroleum producer. Citigroup Inc. said last year that the "super cycle" of commodities gains has ended because supply caught up with demand. The Standard & Poor's GSCI Spot Index of 24 raw materials fell 2.2 percent in 2013, the first annual decline in five years. Silver slumped 36 percent last year and gold tumbled 28 percent, the biggest declines since 1981. The metals were the second- and third-worst performers in the S&P gauge, after corn.

As the CFTC strengthens its oversight of the commodities markets and particularly focuses on how banks have been able to side step limits on position sizing, the appeal of participating in the commodity  markets for major institutions has declined. These decisions have coincided with announcements that a number of banks are selling their commodity warehousing operations which can be viewed in the same context. Concurrently ETF Holdings of Gold continue to slide. 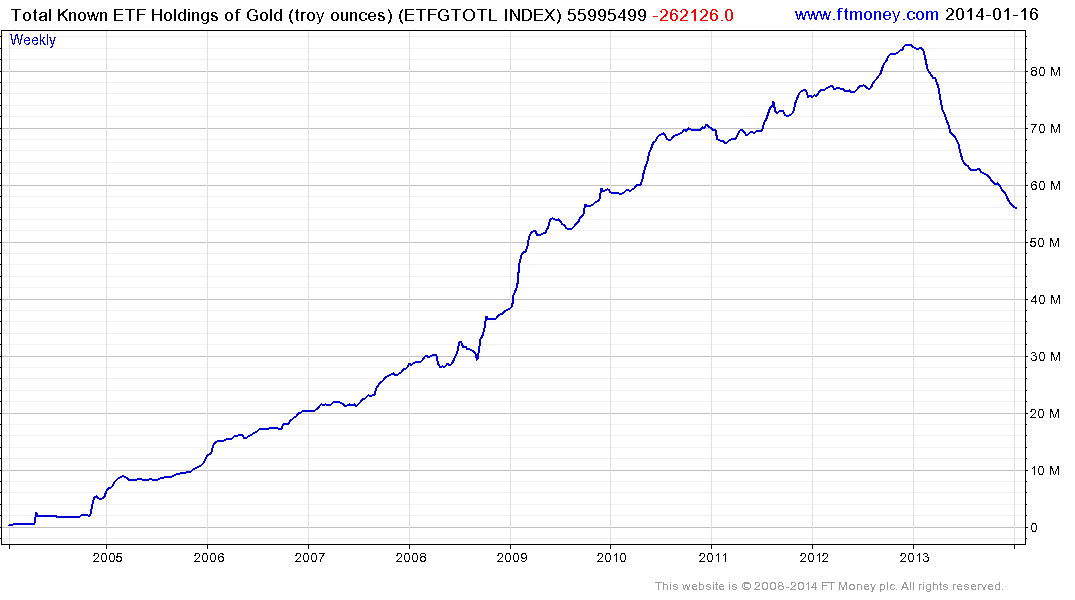 The negative effect of declining commodity prices has not been limited to institutional trading desks. Gold miners were among the worst performing sectors last year and other businesses influenced by gold prices also pulled back sharply. 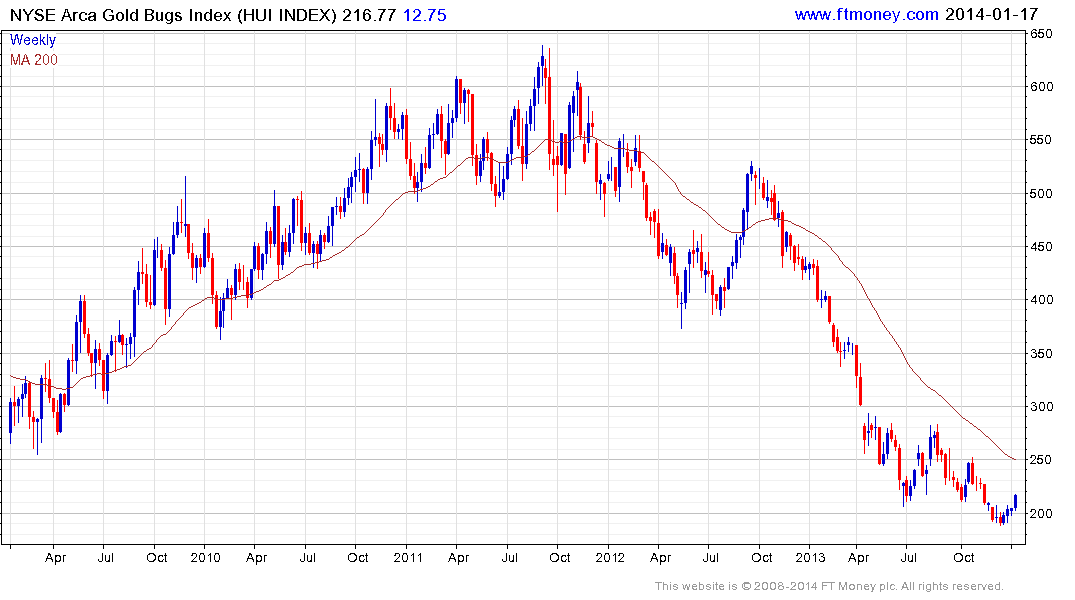 For example, pawn broking firms were exposed to gold’s gyrations as the value of collateral held and forfeited on declined. The UK’s H&T more than halved between March and August but has steadied in the region of 150p and has held a mild upward bias within its range. 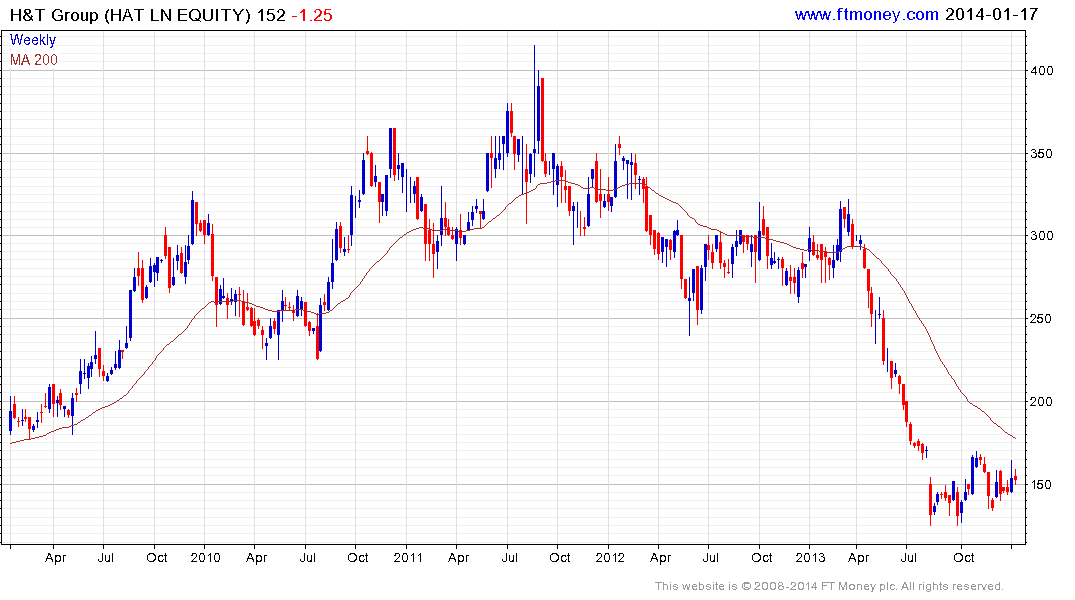 How well gold succeeds in holding its recent lows will have a significant bearing on the ability of related vehicles to successfully form bases. Gold posted an upside weekly key reversal three weeks ago and has improved modestly on that performance since. So far, this move has the characteristics of a reversionary rally back up towards the 200-day MA, currently near $1330, but a sustained move above that level will be required to confirm a return to demand dominance beyond the short term. 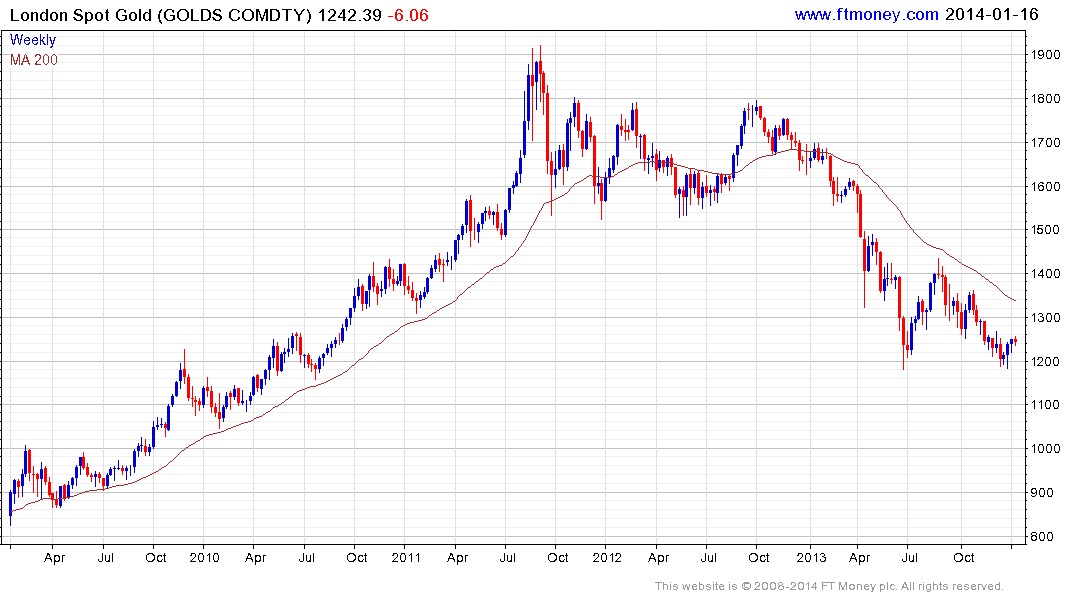