Sena, an analyst at Evercore Partners Inc., calculates Twitter's stock can reach $70 in the next 12 months, while Ernst, an analyst at Hudson Square Research, thinks it'll drop to $20. The spread between those predictions -- which represent the highest and lowest price targets for Twitter -- is the widest among technology companies in the Russell 1000 Index with a market capitalization of more than $10 billion, according to data compiled by Bloomberg.

The division is reflected across the analyst community -- even among the firms that managed Twitter's IPO such as Goldman Sachs (GS) Group Inc. and Morgan Stanley -- spurring large swings in trading. After Twitter extended its post-IPO rally to more than 180 percent last month, bearish ratings have now climbed to outnumber positive ones by more than any other technology company, data compiled by Bloomberg show. Meanwhile, investors are still willing to value Twitter at a price-to-sales multiple more than double that of Facebook Inc. (FB)

2013 was a particularly active year for IPOs with the fourth quarter providing some large cap entries to the market. Record low interest rates, abundant liquidity, investors keen to own the next big thing and an equity Bull that has driven stock market indices from depressed levels to all-time new highs have supported demand for new issues. 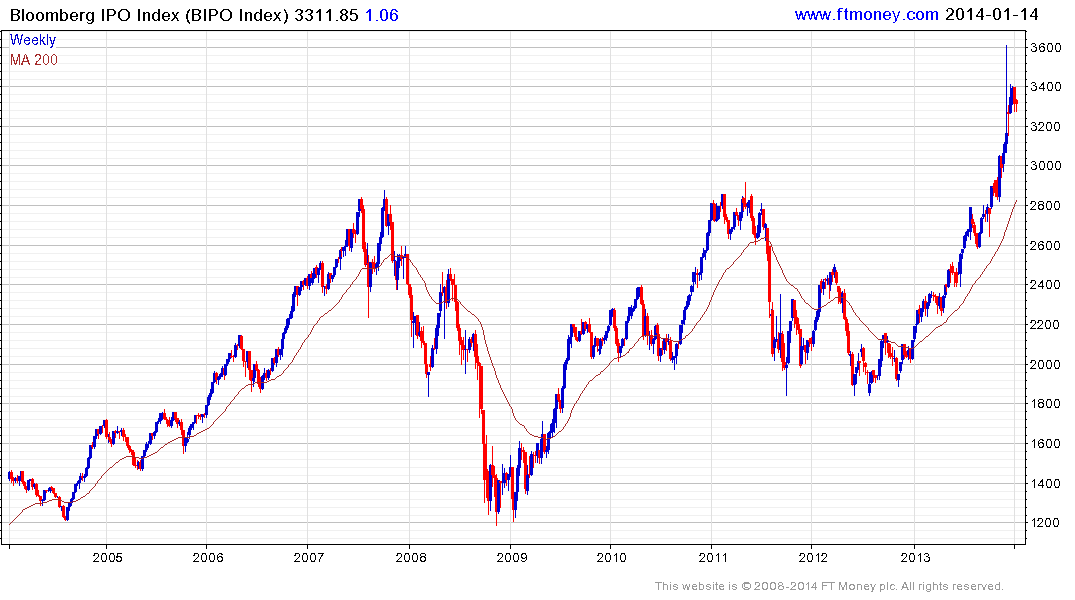 An additional consideration is that over the last 18 months IPOs have generally been a sound investment in the year following their debut. An awareness of this trend will have helped spur additional investor interest. The Bloomberg IPO Index measures the performance of IPOs in the 12-months following their entry to the market and it therefore represents an important benchmark of investor appetite for new issues. Twitter (13.45%) and Hilton Hotels (8.93%) dominate with a combined weighting of more than 22%.

The Index has rallied impressively since July 2012 and broke out to new five-year highs in November. While the progression of higher reaction lows remains intact an overextension relative to the 200-day MA is evident. A sustained move below 3200 would mark the largest pullback in a year and probably suggest a process of mean reversion is unfolding. A more important consideration is that the Index was a notable laggard until mid-2012 and as such is now fulfilling the role of a late in the cycle catch-up play. Therefore while momentum continues to sustain the run, the Index’s outperformance is a warning of frothy market action. 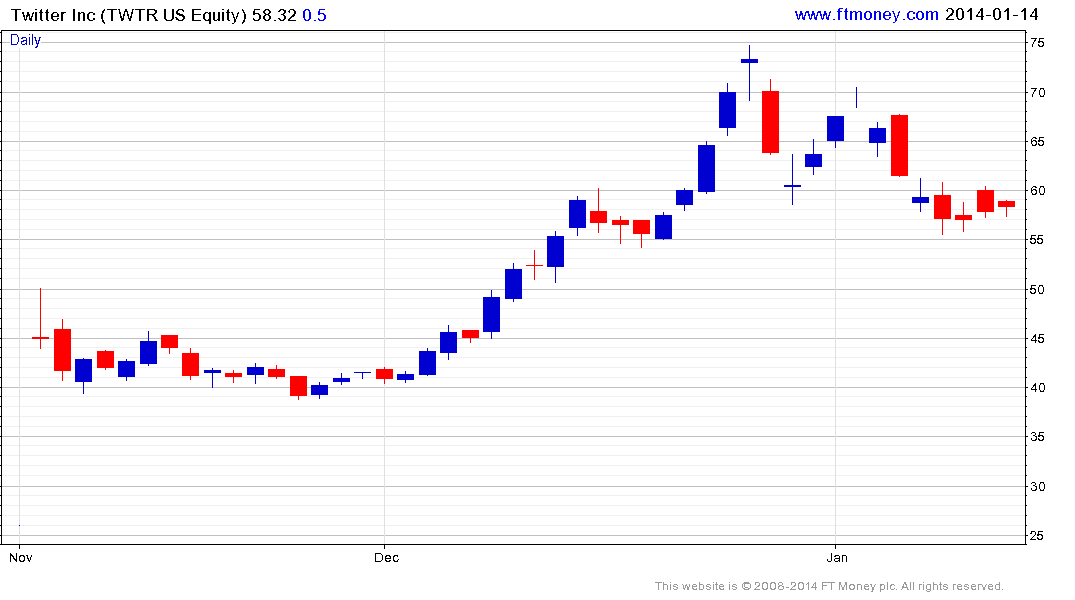 Twitter has pulled back to test the $55 area and will need to hold above that level to indicate demand is returning to dominance. Over the last few days subscribers have separately requested that Hilton Hotels, Quintiles (biotech) and Fireeye (internet security) be added to the Chart Library. All three are recent IPOS and the latter two broke out of their respective ranges at the beginning of the year. The coincidence of requests for IPOs to be added to the Library reflects how popular thee sector has been recently. 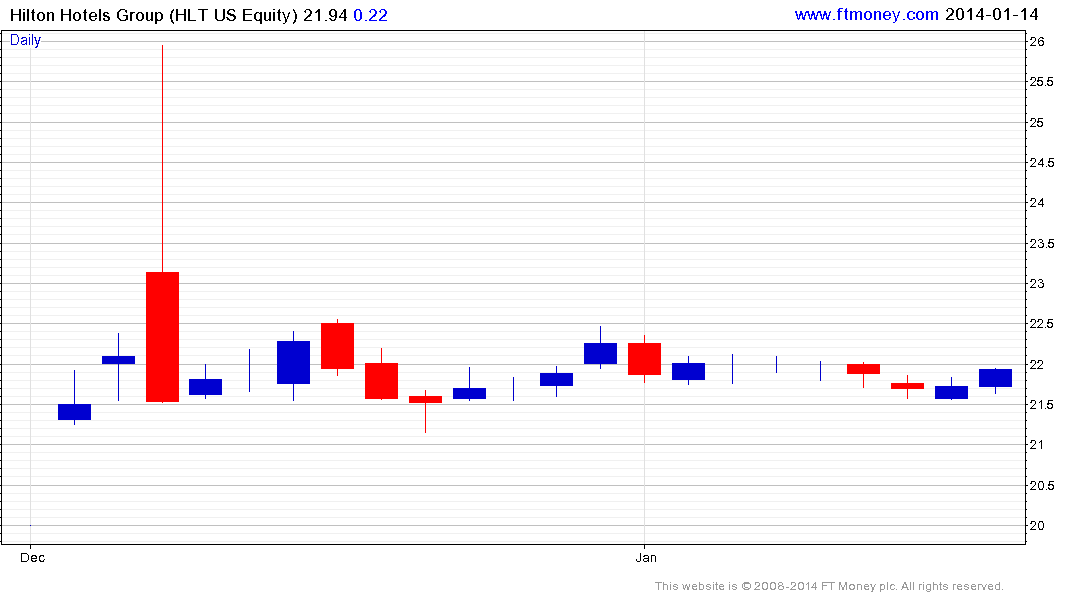 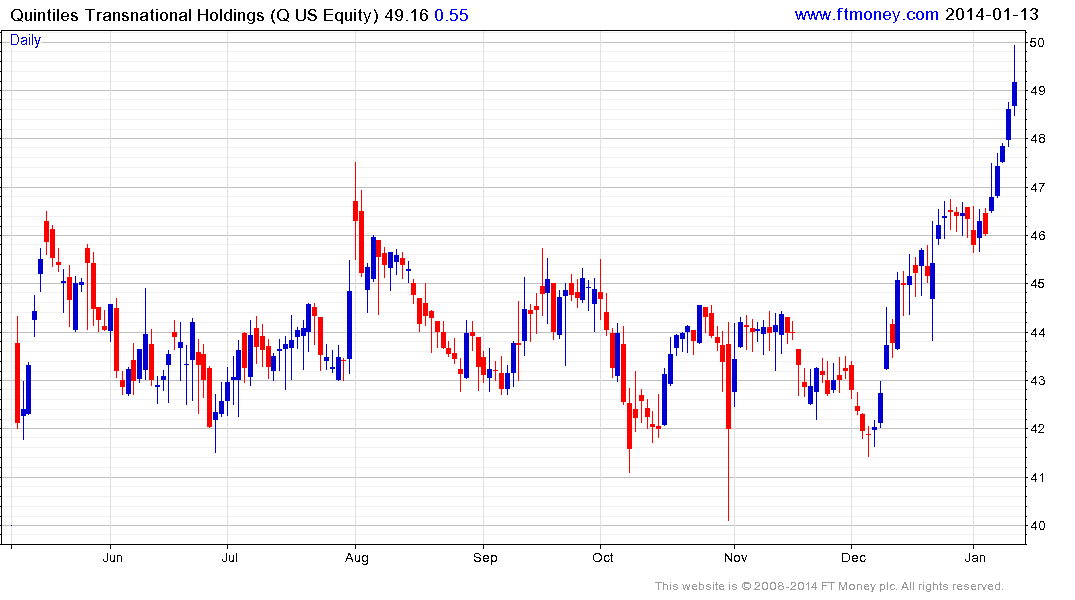 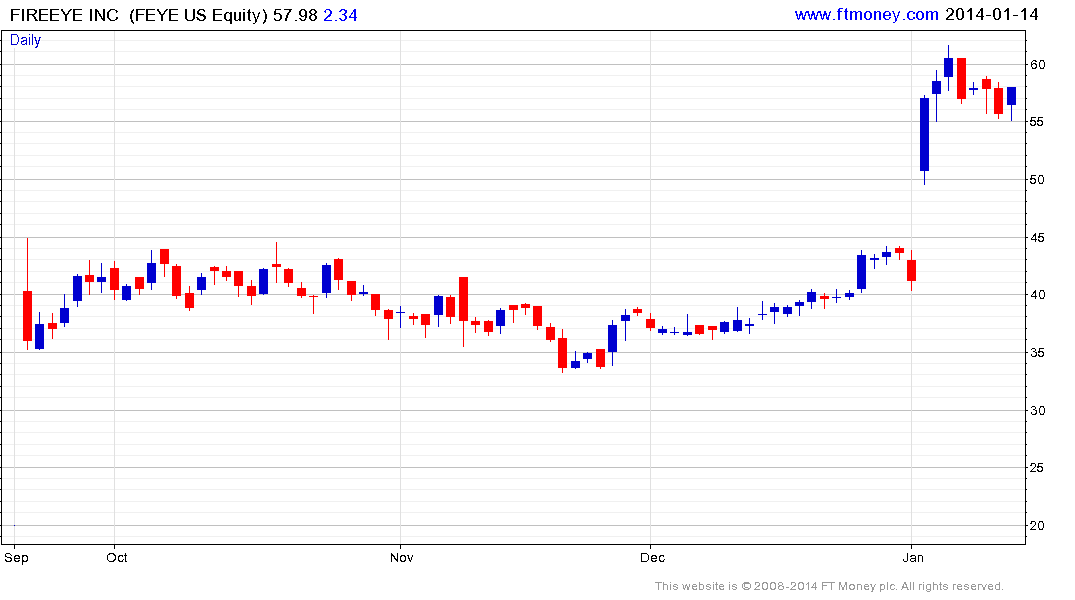