After the ECB flooded banks with more than 1 trillion euros ($1.4 trillion) of 3-year loans at the height of the debt crisis in 2011 and 2012, institutions used most of the money to buy higher-yielding government bonds. Policy makers are weighing options to kickstart lending to companies and households, rekindle growth and prevent deflationary risks from
materializing
.
While “we are ready to consider all available instruments,” the Governing Council has not identified any one “specific instrument” in today’s meeting, Draghi said.

While there has been a great deal of speculation about the potential for the Fed to moderate QE, Europe is a long way from even considering such options. Deflation remains a non trivial risk, considering the depth of the fiscal adjustments imposed on peripheral Eurozone countries.

One must then ask to what extent the Eurozone’s economy is dependent on the Fed’s largesse? If the US economy continues to improve and further progress is seen on growth and employment, the ECB will be forced into a position where it may have to pick up the slack in terms of market supports. This would suggest that while the ECB is considering the shape of additional measures, either a negative deposit rate or asset purchases, the potential for such actions to take place is more likely if the Fed moves to taper in the next few months. 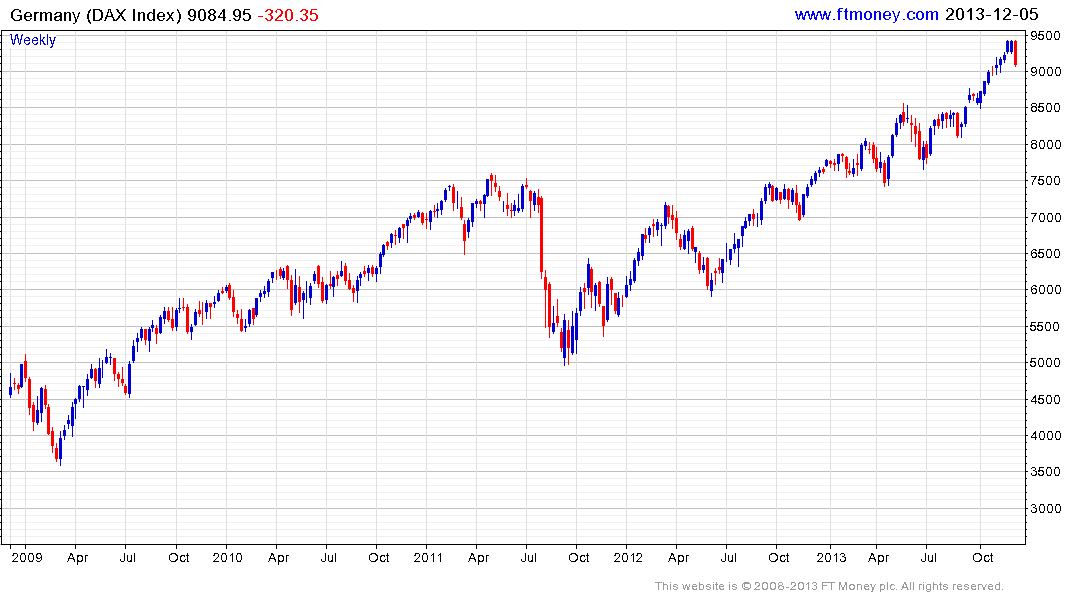 In the meantime, Germany’s DAX Index is working on a large downside weekly key reversal, suggesting a peak of at least near-term significance has been reached and the mean reversion is underway. (In the interests of full disclosure, I have a short position in the Index.)