Let’s start with a proposition that one can prove with simple (if tedious) arithmetic: every deficit of government (spending in excess of revenue) is matched by a surplus across other sectors – households, corporations, and foreign countries – where their income will exceed their consumption and net investment. The chart below shows what this looks like. I’ve excluded some very small payment items for simplicity, but the basic upshot is simple: every time the government runs a deficit, you’ll see it directly reflected in the sum of three surpluses: personal savings, retained corporate profits, and trade deficits (a surplus from the perspective of foreigners).

Think of it this way. What a government deficit does is to direct goods and services produced by other sectors of the economy toward consumption and investment (including transfer payments to individuals, subsidies to companies, and public infrastructure) that has been approved by Congress. In return, the sectors that produced those goods and services receive income for output that they did not consume. This private surplus takes the form of securities, and in equilibrium, those securities are exactly the same ones (Treasury debt and base money) that the government issued in order to finance the deficit.

The red line in the chart below is essentially the federal deficit as a share of GDP (including amounts spent on transfers to other sectors). The blue line is the sum of personal, corporate, and foreign surpluses. The two lines are mirror images of each other because this sort of equilibrium is just arithmetic.

Already, investors may feel a bit sick here. See, the deficit that the U.S. government ran during the pandemic amounted to nearly 19% of GDP, and that – in equilibrium – is exactly why corporate earnings, personal savings, and trade deficits enjoyed a record surge in recent quarters. Meanwhile, the spending bills currently on the table ($1 trillion for infrastructure and $1.8 trillion for social and climate spending) are 8-10 year spending proposals, partially offset by revenue measures. There’s nothing in current legislation that’s going to replicate the breathtaking federal deficits we’ve seen in the past 18 months. That means – purely by the force of arithmetic – that the sum of those other three surpluses must shrink. The only question is which of the three will take that hit.

The hard fundamentals point to a sharply overvalued market, but bull markets don’t die of old age. They are most often assassinated by central banks. The next most significant cause of recessions is surging oil prices. The reality is bull markets thrive on liquidity and as long as the liquidity keeps flowing, valuations will continue to expand.

I agree that running deficits of 19% to GDP in a single year is unlikely to be repeated. However, there are at least three sources of additional new money lining up to support prices. These are:

1. COVID-19 numbers are ramping higher in Europe and Germany just cancelled Christmas…again. Numbers are also rising across much of the central USA. We’ve all gotten used to looser restrictions, vaccinations and additional treatments are available but public health disruptions are still a problem.

That will further delay decisions to tighten policy and could further prolong quantitative easing, especially in Europe. The Euro remains weak and the Dollar has been resurgent against a large basket of currencies. That means less money been spent on imports which improves one portion of the deficit.

2. The build back better spending bill was approved by the House this morning and is now progressing to the Senate. In its current form, it will put more money in the hands of people with disposable income, who are the primary retail owners of equities. That is probably helping spur the Nasdaq-100’s outperformance at present.

3. China’s disciplining of the property sector is easing. That means greater availability of credit and easier lending standards. The turning of the credit impulse has been slow to start but it is moving higher and that represents a significant source of additional liquidity and leverage.

I remain of the view that large portions of the market are extremely interest rate sensitive. The sheer volume of debt issued over the last year and counting is a deterrent to hurrying to raise rates. The major central banks are talking a good game but there is a chasm between intentions and action.

I don’t believe this bull market will end until the FANGMANT stocks turn lower relative to the wider market. The ratio broke out to new closing highs this week. That suggests we could be looking at another significant leg higher. 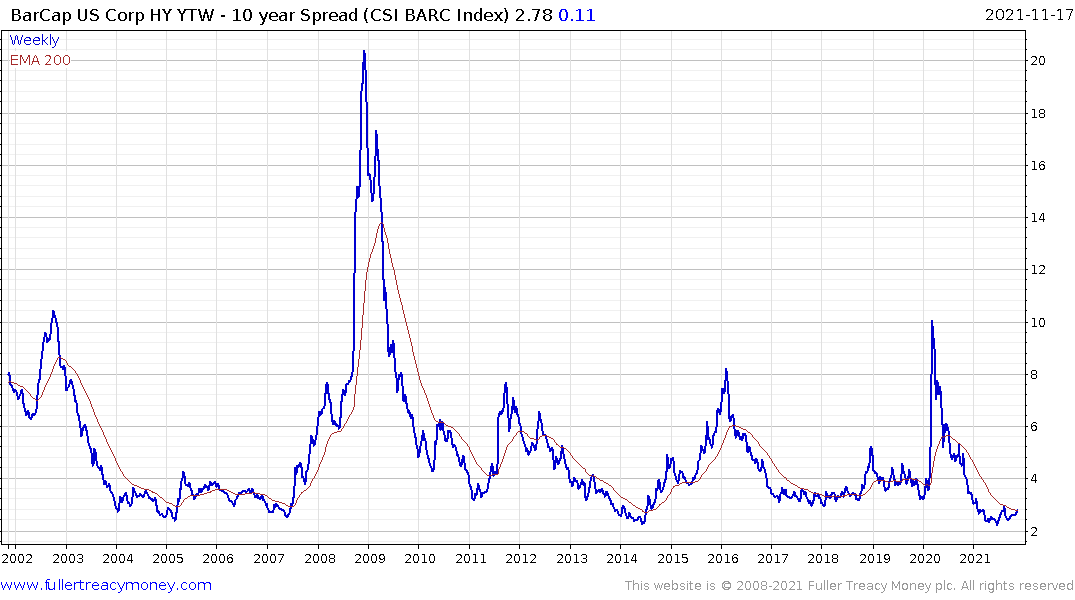 Meanwhile the yield curve spread is still positive by over 100 basis points, high yield spreads are tight and most markets are trending higher. Oil prices are not surging higher and pulled back below $80 today. That suggests the lead indicators for recessions are not flashing anything close to red. 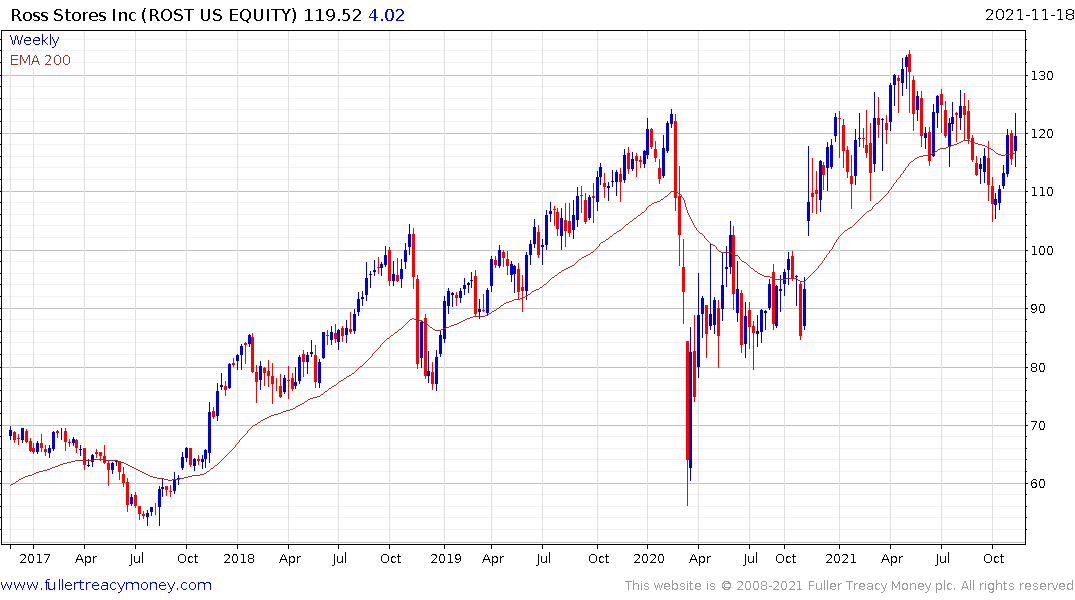 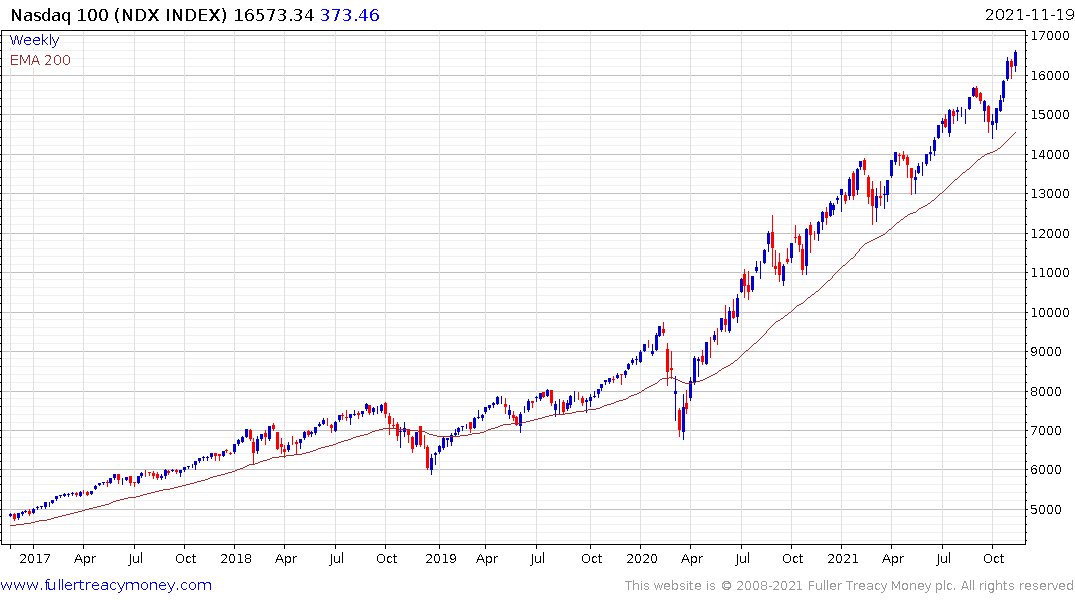 There is, however, clear evidence of another rotation away from reopening to stay at home favourites. Both Ross Stores and TJX are pulling back following strong 3rd quarter results as megacaps extend their rallies.