Member nations “cannot take advantage of EU financial aid on the one hand, and disrespect the European values that unite us on the other. We cannot and will not accept this,” he said. “This is even truer in the context of a recent decision in Poland.”

Testing the Limit
The verdict questioning the supremacy of EU law, announced last week in Warsaw, marked a major escalation in Poland’s already fraught relations with the bloc and triggered street protests. In a joint statement just days later, France and Germany said Poland has a legal and moral obligation to abide by
EU rules.

Poland’s opposition, led by former European Council President Donald Tusk, accused the government of trying to force the country out of the EU. Prime Minister Mateusz Morawiecki, who triggered the ruling by the Polish court, has dismissed that accusation as “fake news”
Still, his government ushered the ruling into law by publishing it in the official gazette on Tuesday, putting put to rest any doubt it may be seeking a way to compromise. “The government has decided to put itself on the collision course with the EU,” said Piotr Buras, a senior policy fellow at the European Council on Foreign Relations in Warsaw. “They’re trying to test the limits of how far they can go.”

The big question for everyone in Europe is where does the state end and the superstate begin. That’s a question which is currently being tested on the eastern frontier of the bloc. Many policy setters in the Eurozone tend to be socially and fiscally liberal (France, Spain, Italy, Belgium), while many in the governments in former eastern bloc countries tend to be both socially and fiscally conservative. That’s true even if they are some of the biggest beneficiaries from structural funds. 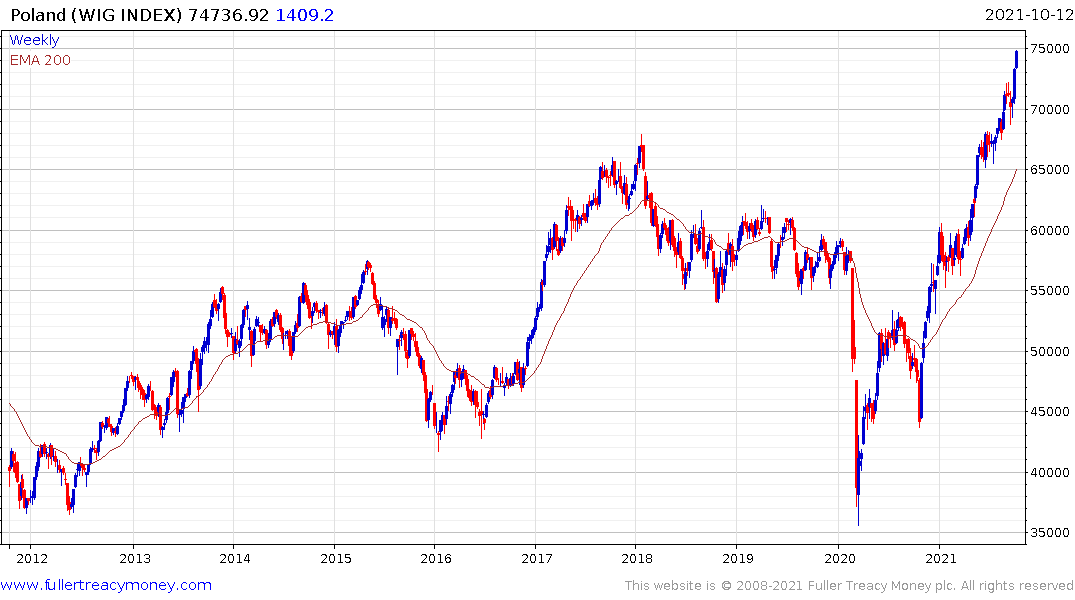 Poland’s stock market continues to extend its rally and is behaving as if this tiff with the EU is no threat to continued supply of new money to the economy. 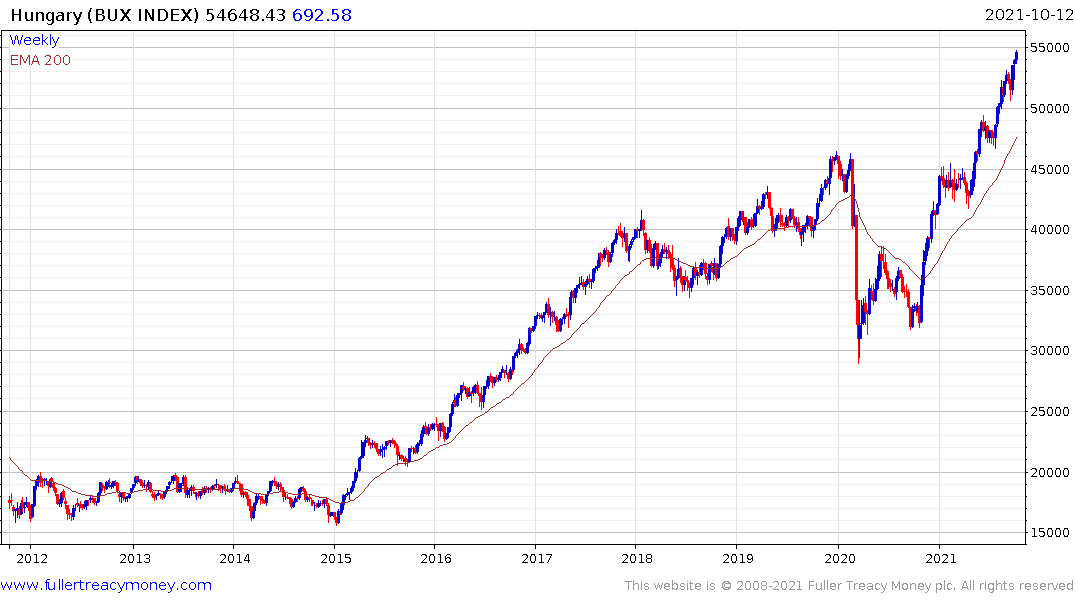 The Hungarian Index is also in a steep uptrend. 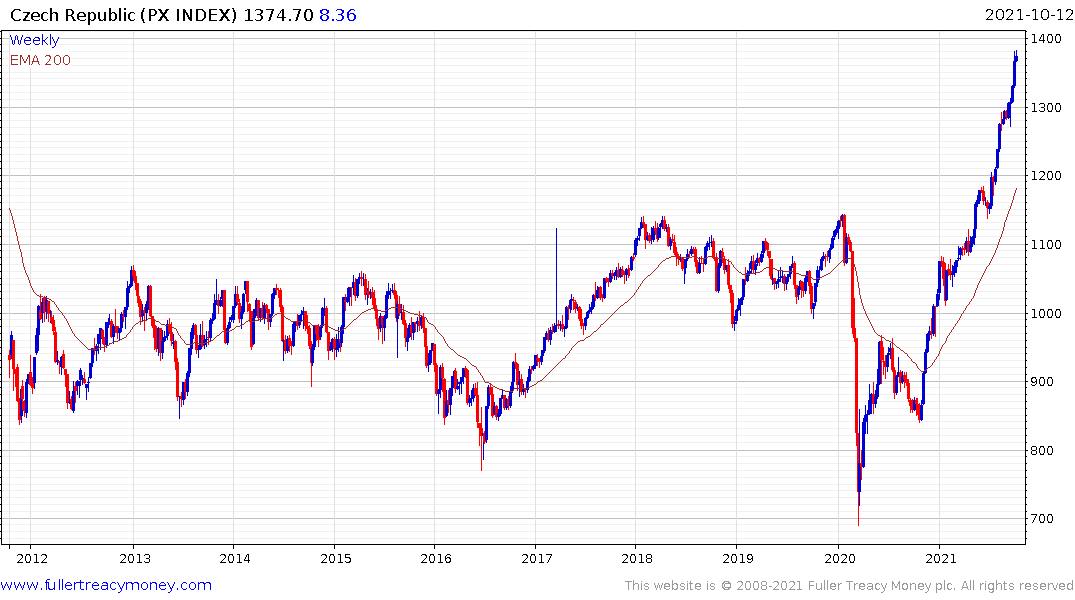 The Czech Index has accelerated; aided by CEZ’s energy exports. 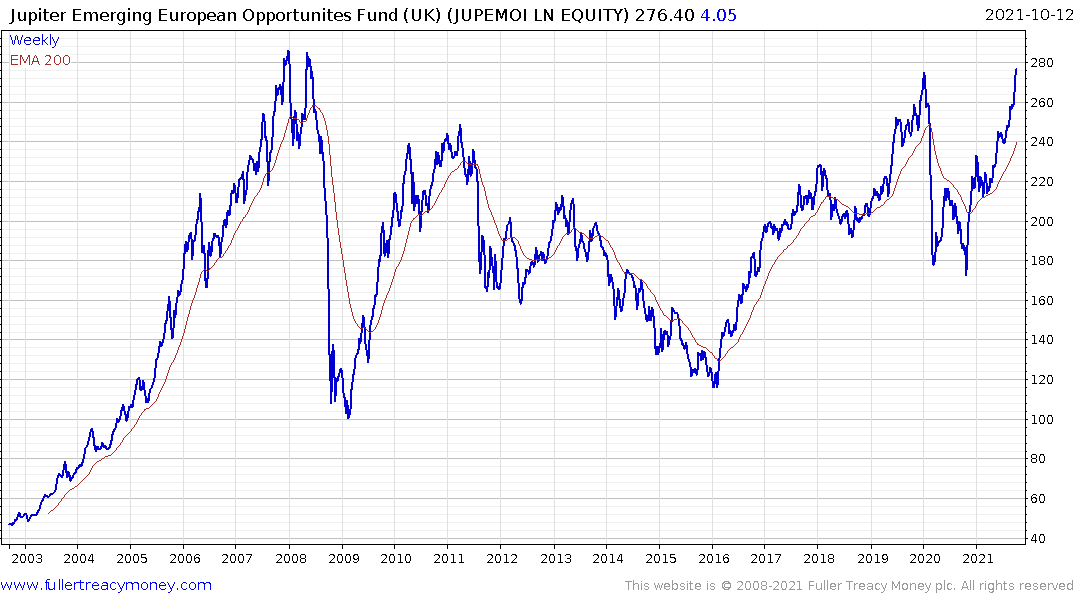 The Jupiter Emerging European Opportunities Fund is testing the upper side of a 14-year base formation.

Also see Comment of the day on April 14th.