But Robert Alster at Close Brothers Asset Management warned of a divide between industrial economies in the north and tourist-reliant nations in the south, despite the start of UK tourism to Portugal. This could spark a return to the two-speed Europe which raised questions over the stability of the bloc after the financial crisis.

Mr Alster said: “The risk now is that the north/south divide continues to widen. Germany’s economic growth is not far behind the UK’s, with its vaccination programme set to overtake, whereas Spain’s economy has been hardest hit,” he said.

“The northern countries have benefited from strong manufacturing growth, with the US and China driving global demand, whereas the Southern countries are on tenterhooks to see whether the European tourism season can go ahead.”

Two consecutive quarters of contraction mean the currency area is officially in recession again, despite not fully recovering from the initial shock of Covid.

GDP remains more than 4pc below its pre-pandemic peak at the end of 2019.

Employment fell by 0.3pc in the first quarter of 2021, meaning the number of people in work is still almost 3.6m below its pre-Covid level.

Jack Allen-Reynolds at Capital Economics said the jobs market should soon start to recover too, but that the rebound in hiring will probably be quite slow.

He said: "Many firms will be able to raise output by increasing employees’ working hours before they start taking on more staff."

Europe and the USA adopted very different methods of supporting the economy during the pandemic. The USA favoured giving direct support to workers by boosting unemployment benefits. Europe favoured supporting companies so they would not fire large numbers of workers. Both sets of policies have resulted in unintended consequences.

For Europe, companies did not fire large numbers of workers so demand in the wider economy will have to recover significantly if they are to increase headcount. The ECB has been happy to talk the Euro down without in fact providing additional support for the region’s economy. Meanwhile the failure of most European countries to source vaccines has limited the speed with which they can recover. That ensures that while the ECB is reluctant to increase assistance, it is not about to remove it either. 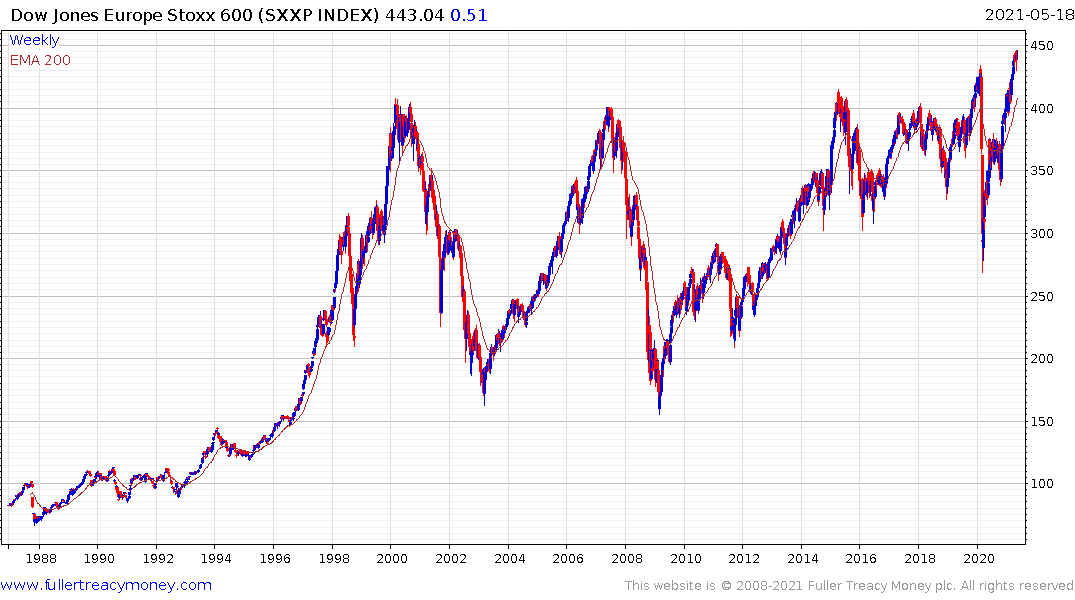 European stock markets are responding more to the outlook for global growth than domestic recovery and the Europe STOXX 600 is breaking out of a multi-decade range. 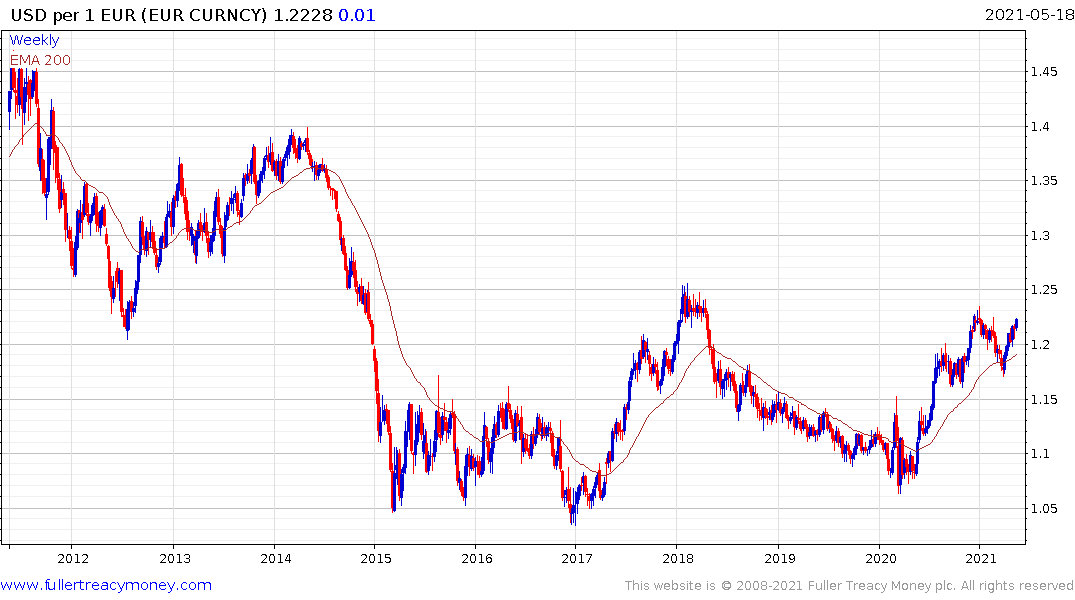 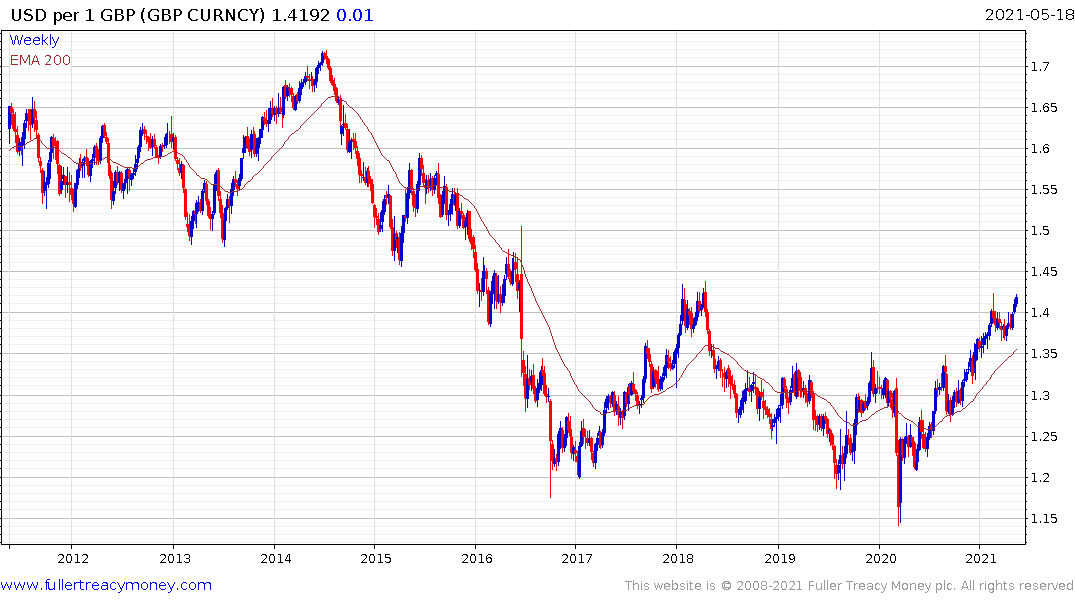 Both the Euro and the Pound continue to trend higher against the Dollar. 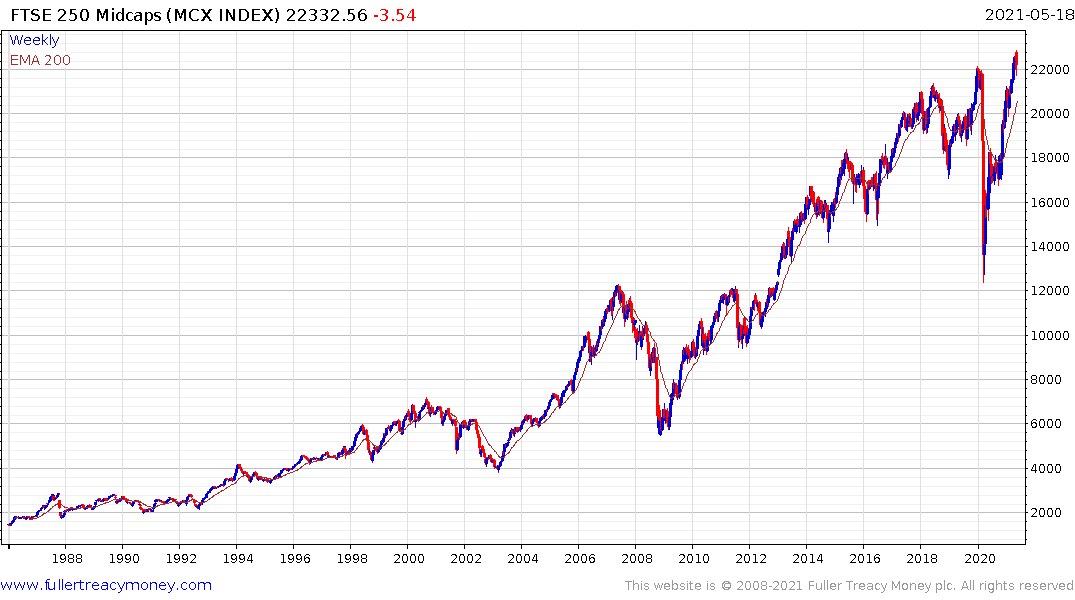 The FTSE-250 is currently steadying from the lower side of its most recent short-term range. 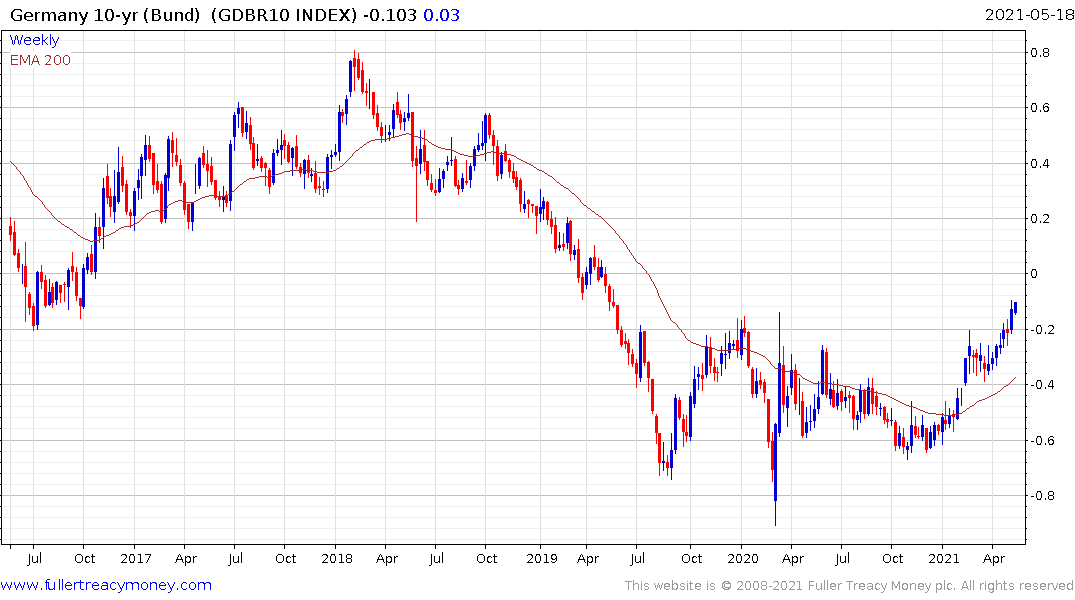 Huge amounts have been invested in German Bunds over the last decade but the yield is now moving back up towards positive territory. Some of the that money will look for a natural home in the equity market.

The USA has a swiftly recovering economy and faces the issue of how to remove the generous unemployment benefits and moratorium on evictions introduced during the pandemic. No politician wants to be the one to take money away from unemployed people and particularly following the Progressive revolutions on the streets of most cities last year. This situation has the potential to represent a tilt further into Universal Basic Income (UBI) territory. Meanwhile these programs are a massive disincentive to accept employment offers and are contributing to supply bottlenecks and inflationary pressures. 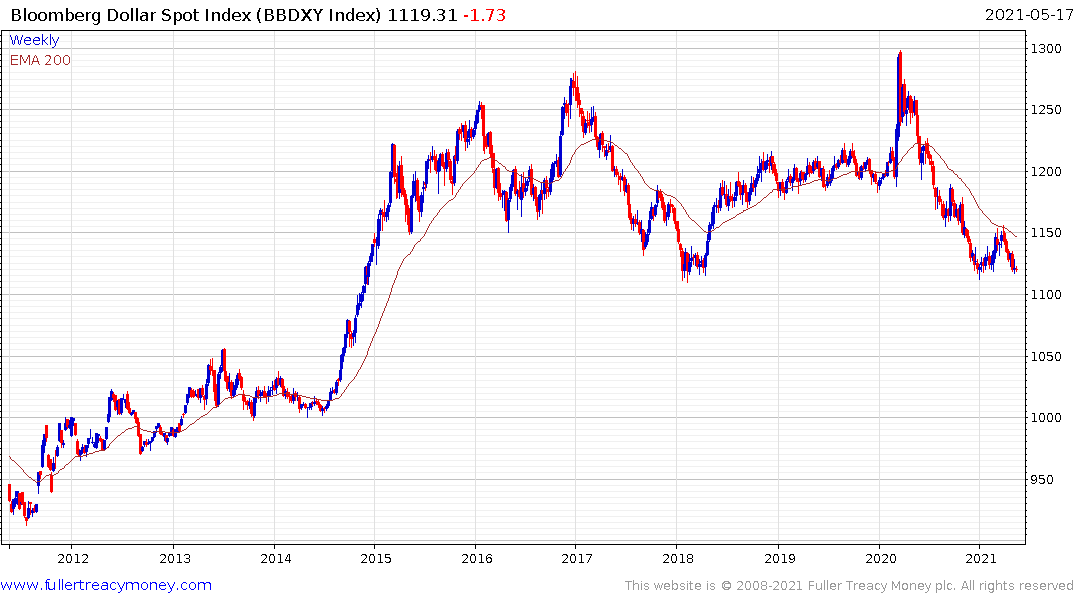 The Bloomberg Dollar Index has Type-3 top formation characteristics and is testing the lower side of the five-year range. It is a little oversold in the very short term but nothing has occurred to question potential for a downward break. 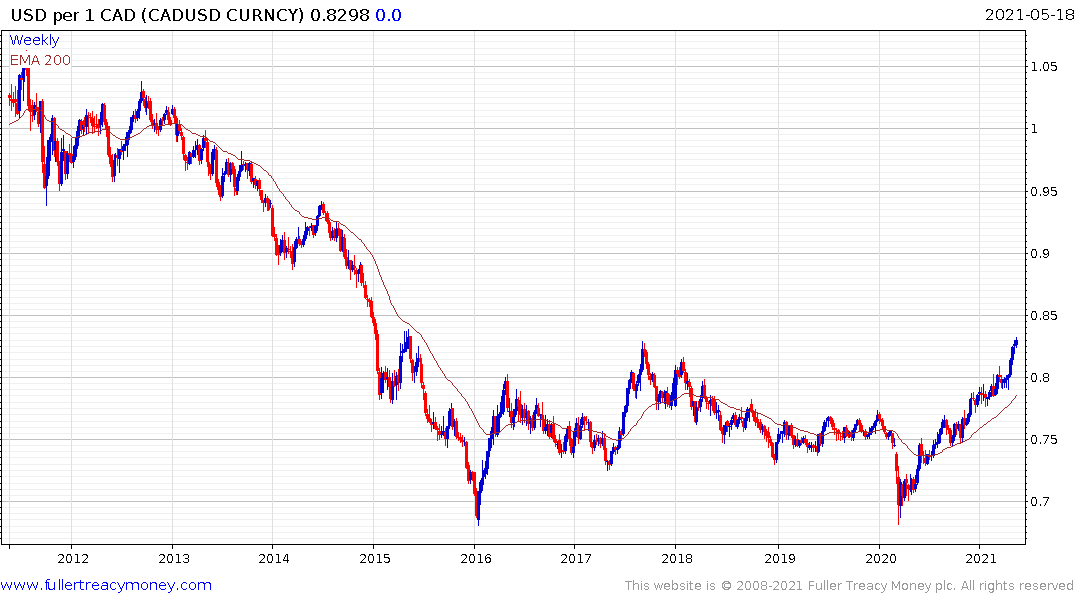 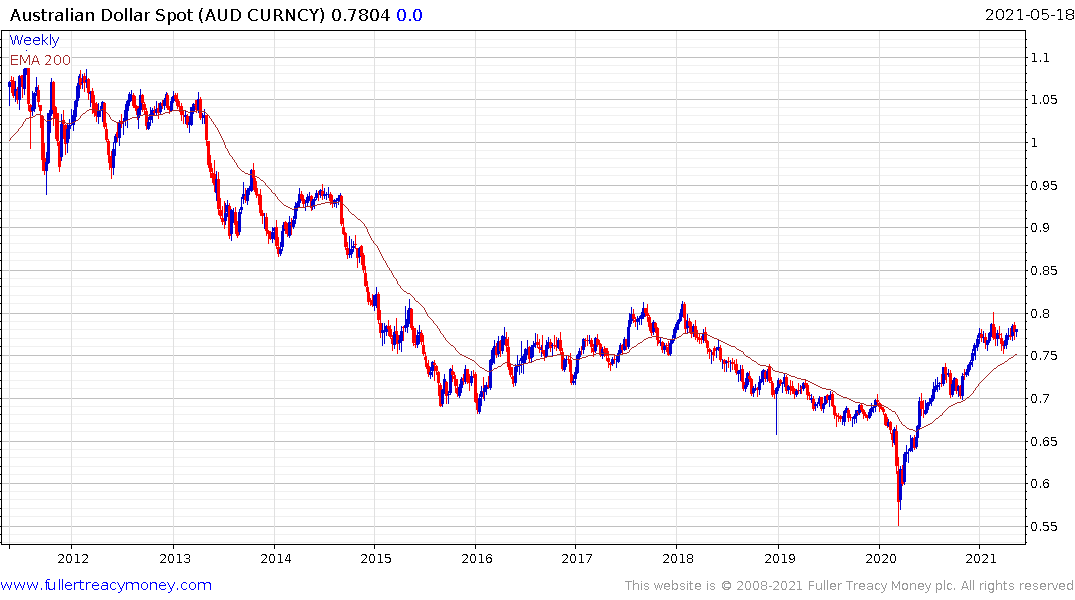 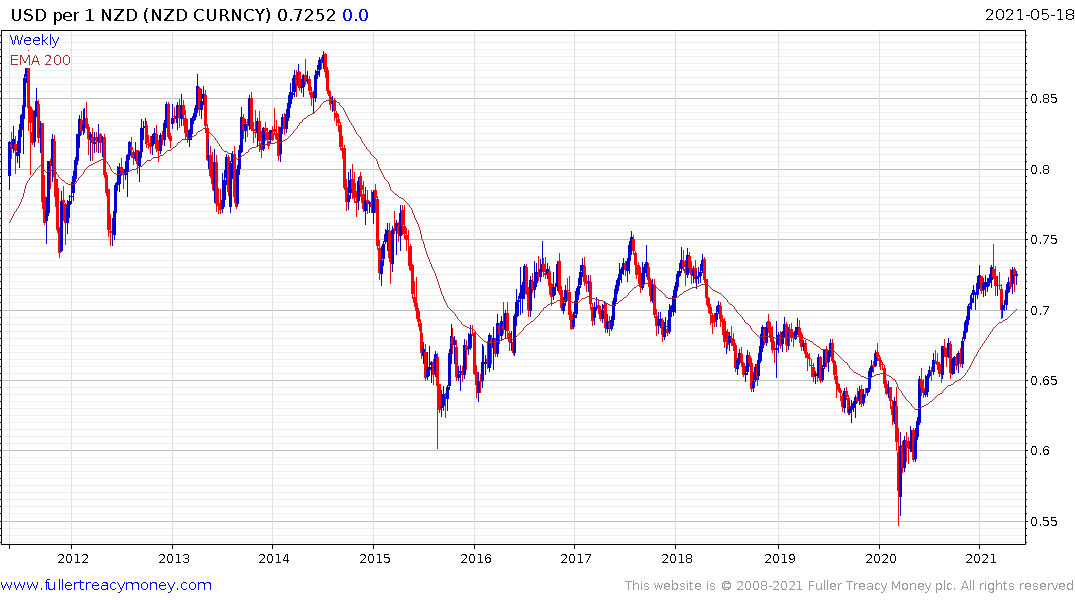 The Canadian Dollar hit a new six-year high today. Generally speaking, when the US Dollar trends lower, it acts as a tailwind for commodities and commodity-related currencies. That equally beneficial for the Australian and New Zealand Dollars.