VanEck ViewPoint: The rhyme of history
Comment of the Day

VanEck ViewPoint: The rhyme of history by Eoin Treacy

We expect a catalyst to emerge in the second half of the year that could drive gold higher. The most likely catalyst would be excessive inflationary expectations. Inflation expectations have returned to pre-pandemic norms, although a number of developments listed here suggest it could spiral out of control:

• US$1.9 trillion of additional fiscal stimulus is likely to be introduced on top of previous government spending, some of which has yet to be utilised;
• The US Federal Reserve (Fed) continues to buy US$120 billion worth of Treasuries and mortgage-backed securities each month;
• Lumber, oil, copper, food staples and other commodities prices have been on the rise, many reaching multi-year highs;
• Shortages of semiconductors, shipping containers and truck drivers have been documented;
• Many people are content to stay out of the workforce, collecting generous government handouts;
• Purchasing power of American families has reached record highs. Further into 2022, once the trillions of stimulus dollars have been spent, other systemic risk catalysts could emerge, such as a weakening economy, debt problems, US dollar weakness and/or black swan events caused by radical fiscal and monetary policies. We believe the long-term bull market remains intact and expect prices to ultimately surpass US$3,000 per ounce. We also note that gold miners remain cheap relative to the price of gold.

It is worth noting that since mid-2020 it appears that Bitcoin has replaced gold as the new gold. But as cryptos have continued to soar, US real rates have now undermined gold value. To remain long Bitcoin would require a belief that real rates are going to retreat.

Mining companies are a hard sell in a world where investors are focused on ESG. As an extractive sector, miners can’t get around the fact that they are polluters. Even with remediation commitments, there is no way to avoid the moniker for polluter.

That also impacts the ability of the sector to source the funding they need for expansion via exploration. Finding somewhere to dig and build is an inherently uncertain prospect but the added obstacle of environmental regulations, protests and carbon costs mean the hurdles to exploration are increasingly high.

As a result, miners are primarily growing through acquisitions. That does not increase total supply which supports the price structure. The LME Metals Index remains on a recovery trajectory. The imposition of all-in-sustaining-costs on the gold mining industry means it is now quite easy to get an idea of what the miners believe their worst-case scenario for production costs is. The majority are currently running on c.40% margins at today’s gold price. 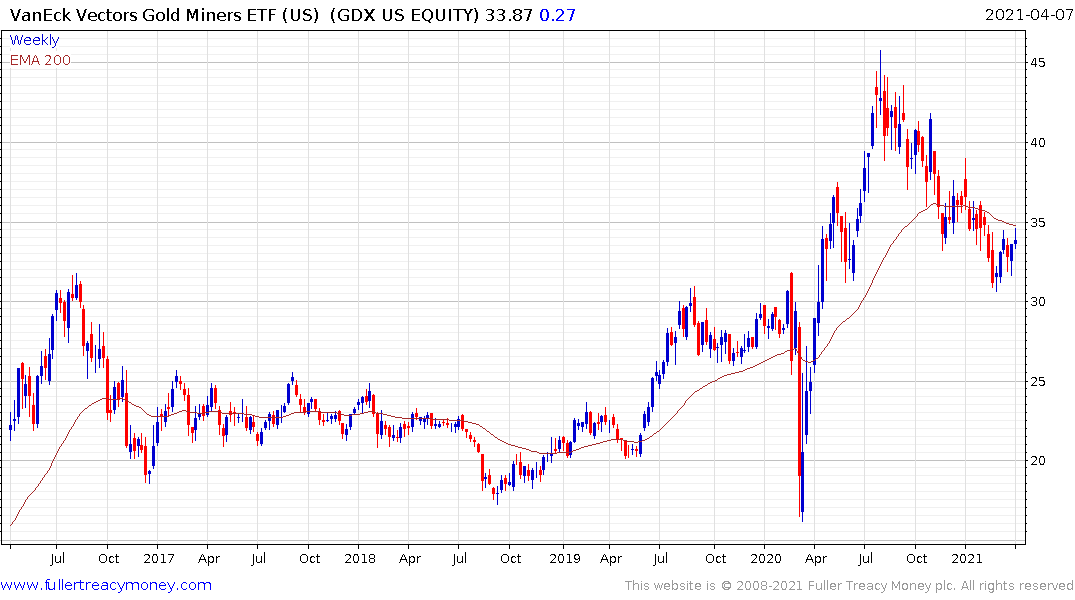 The VanEck Vectors Gold Miners ETF continues to steady in the region of the upper side of its base formation. When gold does enough to break its seven-month downtrend, there is ample scope for gold miners to return to a high beta position relative to the metal price.