Berkshire Hathaway Preamble to the Annual Meeting
Comment of the Day

Berkshire Hathaway Preamble to the Annual Meeting by Eoin Treacy

Berkshire’s investment in Apple vividly illustrates the power of repurchases. We began buying Apple stock late in 2016 and by early July 2018, owned slightly more than one billion Apple shares (split-adjusted). Saying that, I’m referencing the investment held in Berkshire’s general account and am excluding a very small and separately-managed holding of Apple shares that was subsequently sold.

When we finished our purchases in mid-2018, Berkshire’s general account owned 5.2% of Apple. Our cost for that stake was $36 billion. Since then, we have both enjoyed regular dividends, averaging about $775 million annually, and have also – in 2020 – pocketed an additional $11 billion by selling a small portion of our position. Despite that sale – voila! – Berkshire now owns 5.4% of Apple. That increase was costless to us, coming about because Apple has continuously repurchased its shares, thereby substantially shrinking the number it now has outstanding. 6 But that’s far from all of the good news.

Because we also repurchased Berkshire shares during the 21⁄2 years, you now indirectly own a full 10% more of Apple’s assets and future earnings than you did in July 2018. This agreeable dynamic continues. Berkshire has repurchased more shares since yearend and is likely to further reduce its share count in the future. Apple has publicly stated an intention to repurchase its shares as well. As these reductions occur, Berkshire shareholders will not only own a greater interest in our insurance group and in BNSF and BHE, but will also find their indirect ownership of Apple increasing as well. The math of repurchases grinds away slowly, but can be powerful over time. The process offers a simple way for investors to own an ever-expanding portion of exceptional businesses. And as a sultry Mae West assured us: “Too much of a good thing can be . . . wonderful.”

Buying back shares appears to be back on the menu for an increasingly large number of companies. For investors who seldom sell, like Berkshire, that’s good news provided the number of shares in issuance does in fact contract.

One of the most egregious abuses of share buyback programs is that additional shares are issued at a similar pace through executives exercising options. That effectively means buybacks amount to a massive transfer of wealth to company management.

To monitor this risk the only way I can think of is to monitor the trend of the market cap. When the market cap trend is below the price the company is withdrawing shares from the market and vice versa. When I last wrote about this topic in December, I used Norwegian Cruise Lines as an example. It has issued a large number of new shares in the last 12 months so the market cap is trading above the price.

Apple was actively supporting the share price between 2012 and 2019. Since the pace of assistance has moderated and the share is trading in line with the market cap.

In the last year, the S&P500 has seen the market cap trend has traded above the price because companies have not been buying back shares. So far this year the trends have been synchronised which suggests buybacks are returning. 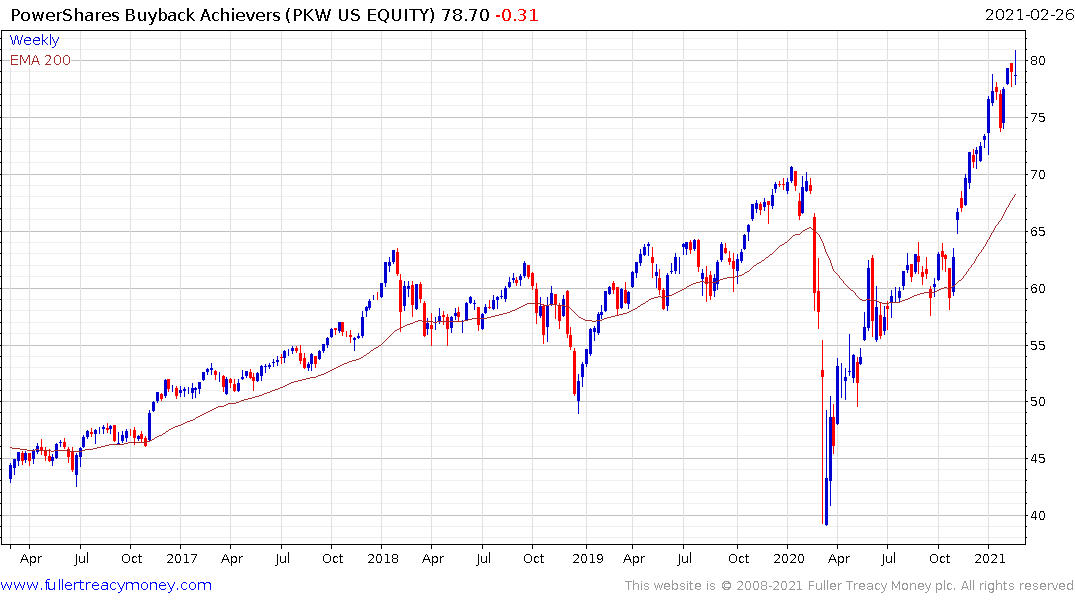