In today’s edition, we look at large U.S. bank’s ability to absorb these flows at the bank operating subsidiary level, where reserves are not exempt from the calculation of the SLR. The first three sets of charts show that the Fed’s QE and Treasury’s fiscal largesse were absorbed in large part by only three banks: J.P. Morgan, Citibank and Bank of America. Their pre-pandemic SLR buffers and capital growth since the start of the pandemic – thanks to the Fed’s ban on stock buybacks – helped absorb close to 75% percent of reserves injected by the Fed during 2020. If the U.S. banking system is like a Boeing 747…

…it’s been flying with only three engines last year, as the fourth big depository – Wells Fargo – hasn’t grown its balance sheet one penny. That’s because Wells Fargo is still subject to an asset growth ban for past missteps (see here). Wells Fargo has plenty of excess capital at the bank operating company level, but the ban on asset growth means that the bank can’t add more reserves without shrinking its dealer’s book – to keep assets at the holding company flat.

The ban was imposed on Chair Yellen’s watch, and Secretary Yellen may get involved in soon lifting that ban. War finance involves lots of central planning, and freeing up balance sheet to fight the pandemic is good central planning…

If Wells Fargo’s asset growth ban is finally lifted during the first half of this year, and if the “four engines” are willing to run their bank-level SLRs down to 6.1% – or 10 bps above the regulatory minimum – the four big banks could absorb $900 billion of reserves. If Wells Fargo is still constrained, only $500 billion (for capacity estimates using other SLR targets see the first chart on page 6).

The absence of a credit multiplier helped to keep inflation under wraps for the decade after the Global Financial Crisis. Banks just did not have the ability to lend, even if they had wanted to. Rebuilding their balance sheets was the number one priority. It was a monumental task. New regulations massively increased the burden of compliance and simultaneously denuded banks of some of their most profitable operations. The result is that the sector has been recapitalised but it is now much more risk averse than before.

Banks are not going to lend unless they have the imprimatur of the government. We saw the first example of that in the response to the pandemic. Banks were given funds, told to lend and backstopped in the event of default. It is quite likely efforts will be made to provide credit to individuals who were impacted by the pandemic. The net effect is lending standards are due to be relaxed because the government will support it. That’s one of the primary reasons for being bullish on reflation. Such measures would help to ensure the continued supply of liquidity. 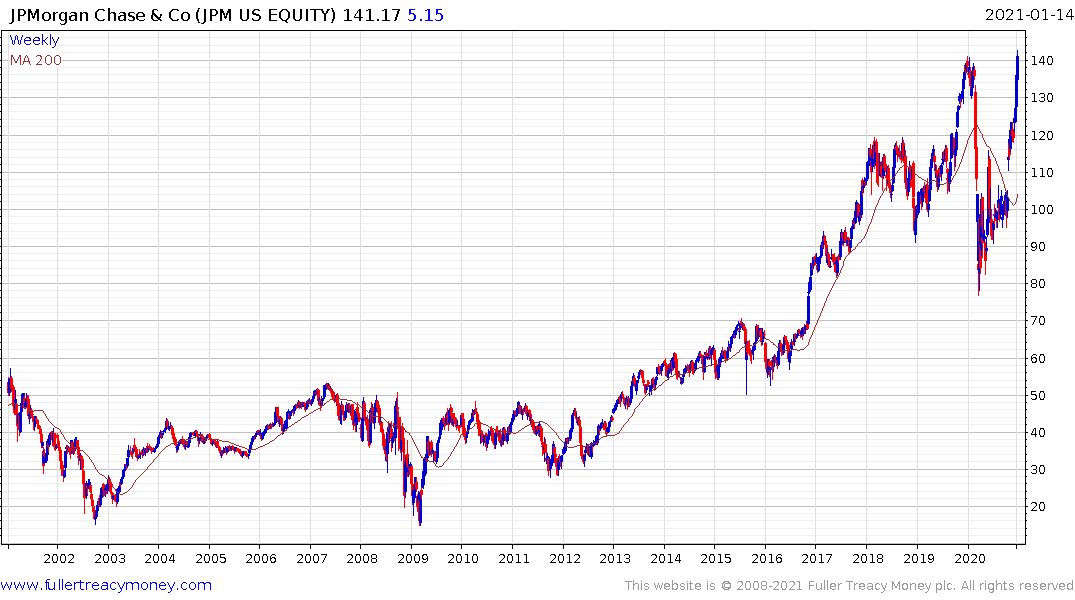 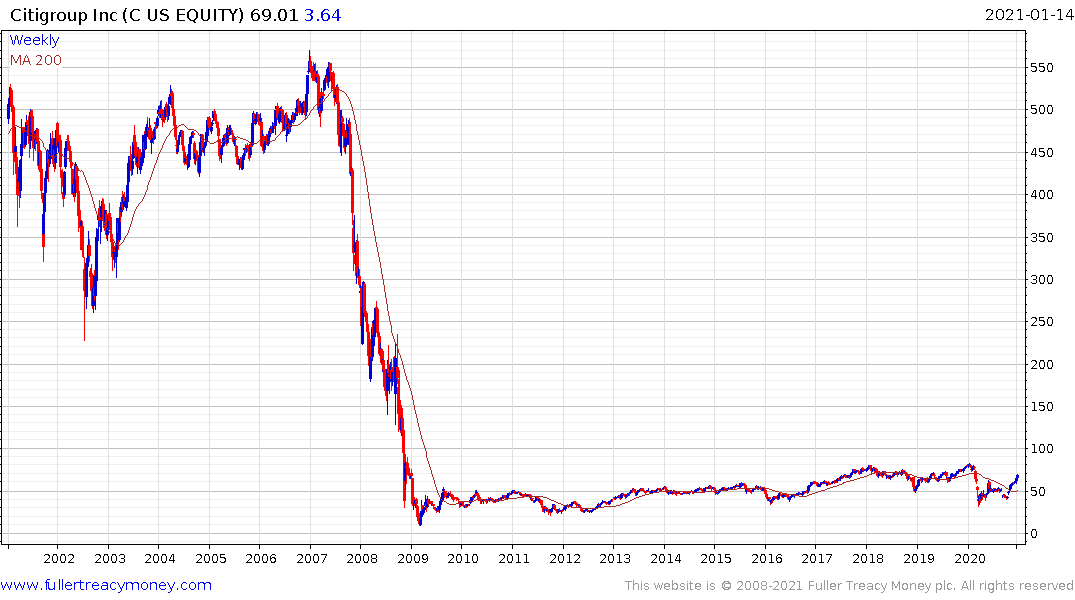 Citigroup has been quite volatile over the last 12 years but continues to hold a mild upward bias overall. 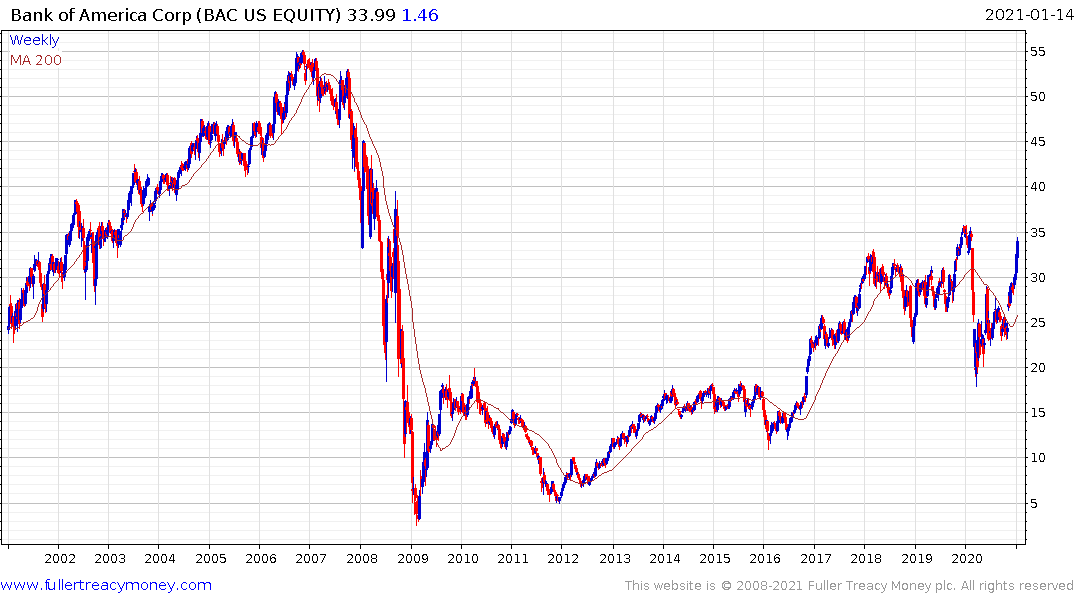 Bank of America is rallying towards the upper side of a three-year first step above the eight-year base formation. 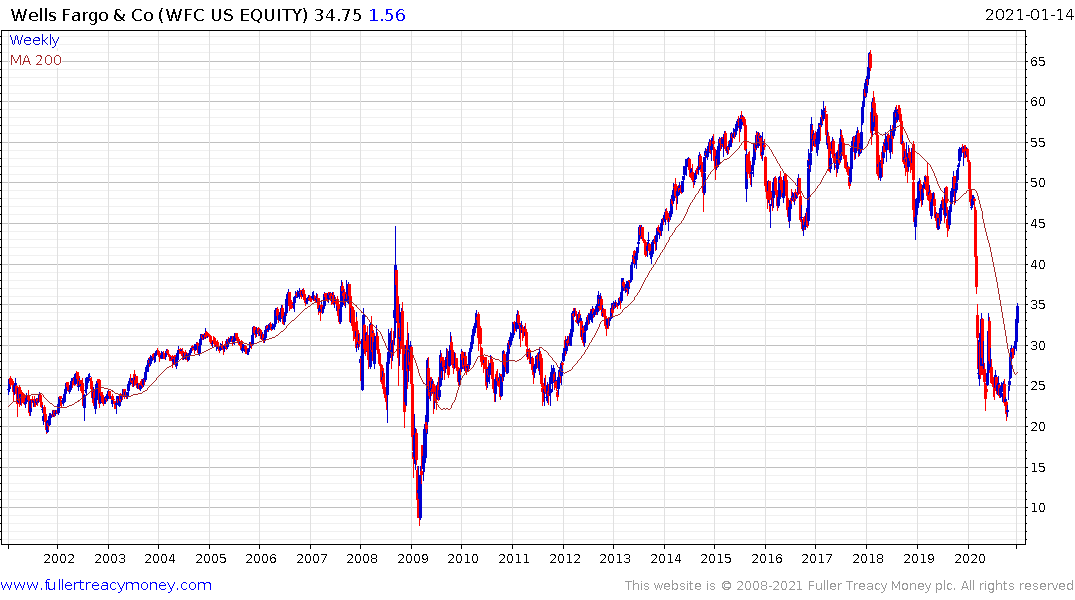 Wells Fargo is in the process of completing a classic Type-2 bottom as taught at The Chart Seminar; with a massive reaction against the prevailing downtrend.