Fiscal cliff meets peak Fed. We believe much of the recent correction is due to the rally simply exhausting itself into long-term resistance. However, we also think it coincided with disappointing progress on the passage of CARES 2 and a very clear message from the Fed that it does not plan to enact yield curve control as they implement average inflation targeting. The Fed followed up that messaging this past week with further disappointment for bond bulls by not providing any formal guidance on their plans for QE. This weighed on interest rate sensitive stocks disproportionately – i.e. Nasdaq/growth stocks.

The market is now faced with two potential outcomes: 1) Congress fails to pass the bill and the recovery stalls, or 2) Congress does pass CARES 2, which is good for the recovery but bad for the long end of the bond market. The equity market appears to have been looking past near-term risk on CARES 2 passage as it tilted in favor of cyclicals. However, the unexpected death of Supreme Court Justice Ginsburg adds another element of risk to the timing of the outcome, and could weigh on the market overall in the near term.

The death of Justice Ruth Bader Ginsburg has injected an additional element of contention into the US Presidential Election competition. It therefore further reduces the potential for an additional stimulus in the short term. Meanwhile, central banks have appeared reticent to boost liquidity. The partial rebound in economic activity has improved the velocity of money reading but it is raw liquidity measures that stoke leveraged bets. 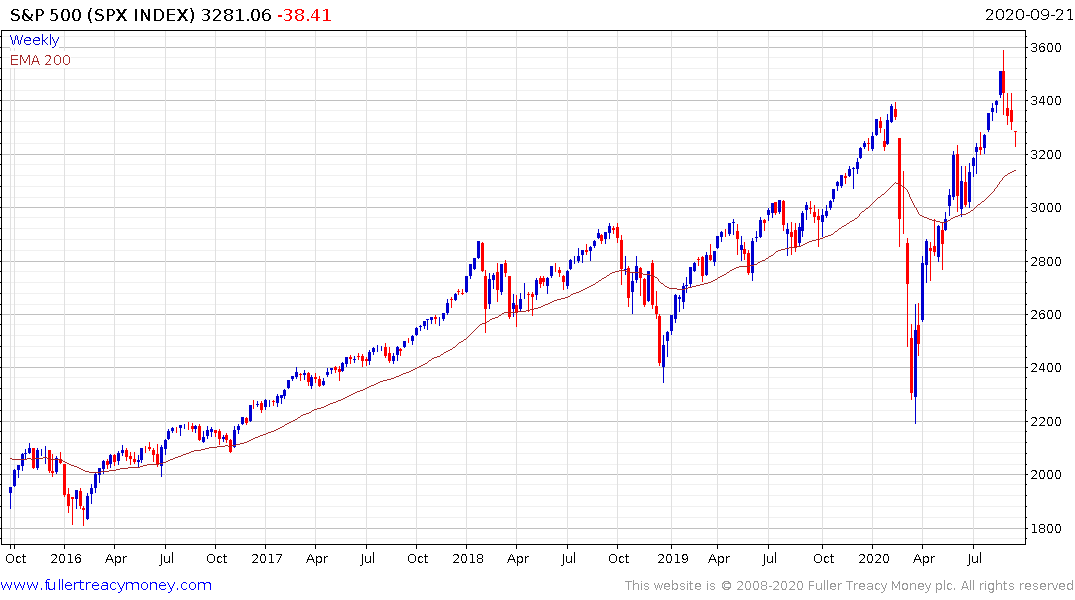 As I mentioned last week, there was evidence first of stocks pausing in the region of their 50-day MAs and subsequently falling below them. That translated into a more broad-based sell-off today. The Dollar rebounded, the VIX Index popped back above the trend mean and the tech sector looks likely to further unwind its overextension relative to the 200-day MA. 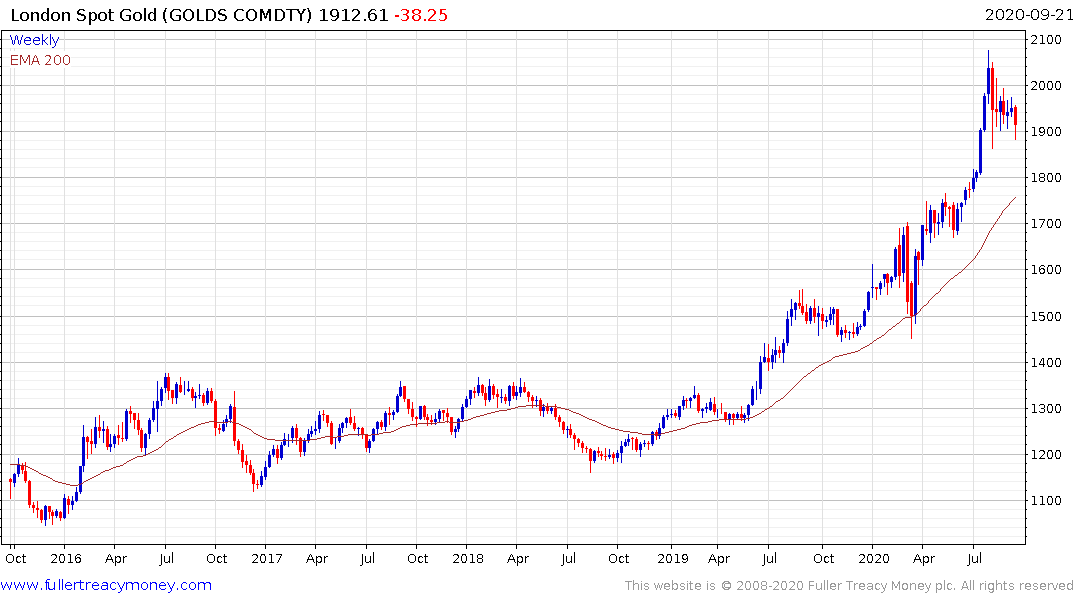 Gold pulled back sharply to test the $1900 which is the lower side of the evolving short-term range but is still $180 above the trend mean. There have been a lot of parallels between this bull market in gold and the one that started in the early 2000s. These include the size of the initial rebound, the length of time until the base was completed following that move and the subsequent size of the breakout.

An additional characteristic that was common in the last bull market was, following a significant rise, the price would go sideways and unwind about half the overextension. It would then pull back sharply to complete the overextension. Sharp rebounds followed which eventually led to the next big breakout. Waiting for occasional bouts of volatility, where weak holders are shaken out, was the best strategy to follow in the last bull market and led to us repeatedly using the “don’t pay up for commodities” mantra. 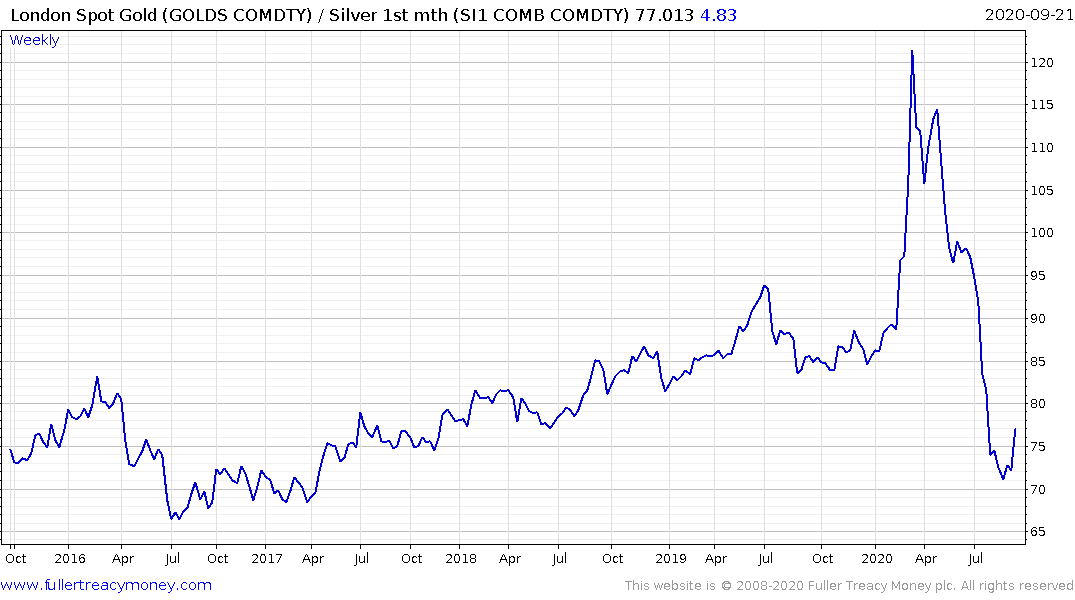 The gold/silver ratio also popped on the upside today which suggests silver may now be above to unwind its own overextension relative to gold. Silver tends to outperform gold in bull markets but it does move in a straight line. The massive outperformance since March broke its relative downtrend but some consolidation of that move is now looking likely so we can expect silver to underperform gold in the short term.

The peak to trough swing on the S&P500 briefly exceeded 10% today and it is within 140 points of its trend mean. A clear upward dynamic will be required to signal a return to demand dominance.

Could it be as simple as we just finished the summer holiday season? Many people could not bear to forego a vacation. Mass congregations at beach resorts probably contributed to the spike in Spain and elsewhere. If that supposition is correct, we should not see the numbers of cases continue to rise into October. The southern hemisphere’s flu season has been the least active in years because of the trend of social distancing. There is no reason to believe our experience in the Northern hemisphere will be any different.

Meanwhile liquidity, and how willing central banks and governments are to provide it, will be the deciding factor in how deep this correction goes.