Masahiro Kami, an infectious diseases expert, said he was skeptical that the suspension of some public events would have a significant impact on the spread of the virus. “Commuting on a packed train, for instance, is way worse than taking part in the Tokyo marathon,” he said.

Dr. Kami, who heads a nonprofit organization called the Medical Governance Research Institute, said a media focus on the few cases of serious illness from coronavirus infection in Japan had created a panic over the need to cancel events.

While Japan initially had a handful of cases involving people who had come from Wuhan, the center of the epidemic in China, or had direct contact with someone from Wuhan, a surge of cases in the past week included many whose path of infection wasn’t clear. The cases span from Hokkaido in the north to Okinawa in the far south.

More than 1,000 people disembarked from the Diamond Princess cruise ship between Wednesday and Friday, and they entered Japan without restrictions on their movements. All of those passengers tested negative for the virus, but in some cases people have tested positive after a negative test—including two cases reported Friday in Australia, which sent a flight to Japan to repatriate citizens who had been on the ship.

The coronavirus popping up in unrelated areas in Japan is not exactly good news. Additionally, the lax quarantine imposed on the passengers of the Diamond Princess cruise liner greatly increases the potential for the virus to spread even further. At a minimum the potential is for much tighter measures to contain the spread across Japan and other countries. This is also going to create a headache for Abe’s government. 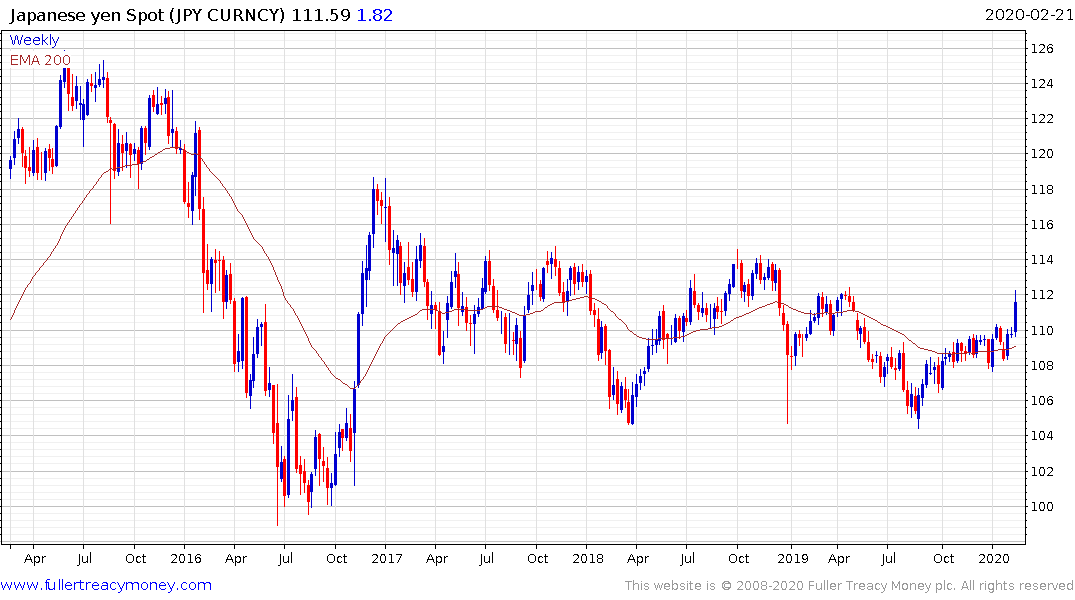 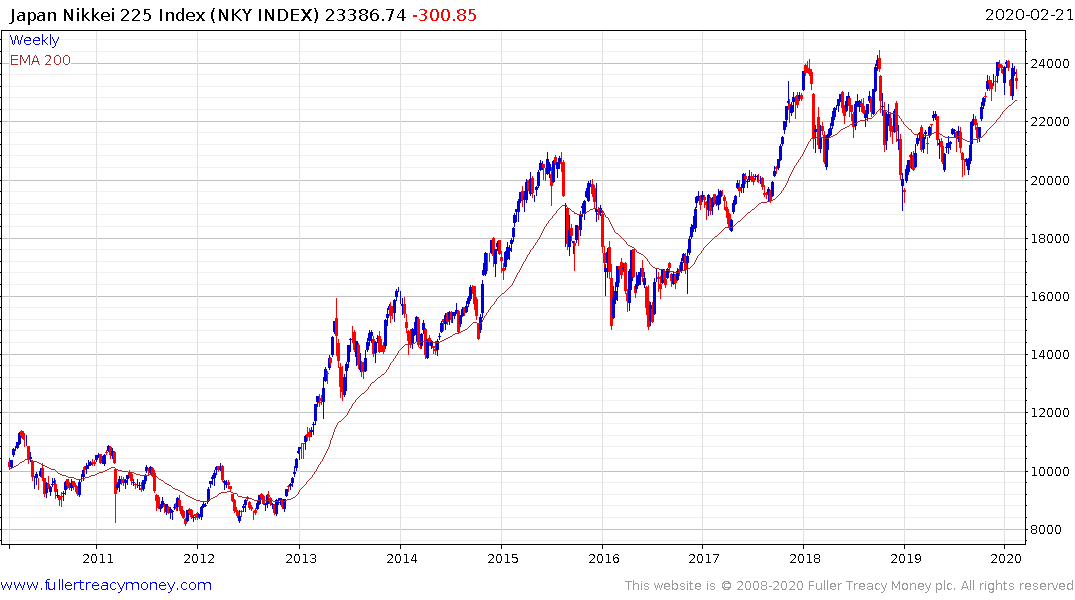 The Yen was a little steadier today but has continued to hold its breakout while the Nikkei continues to consolidate in the region of the upper side of its two-year first step above its base. 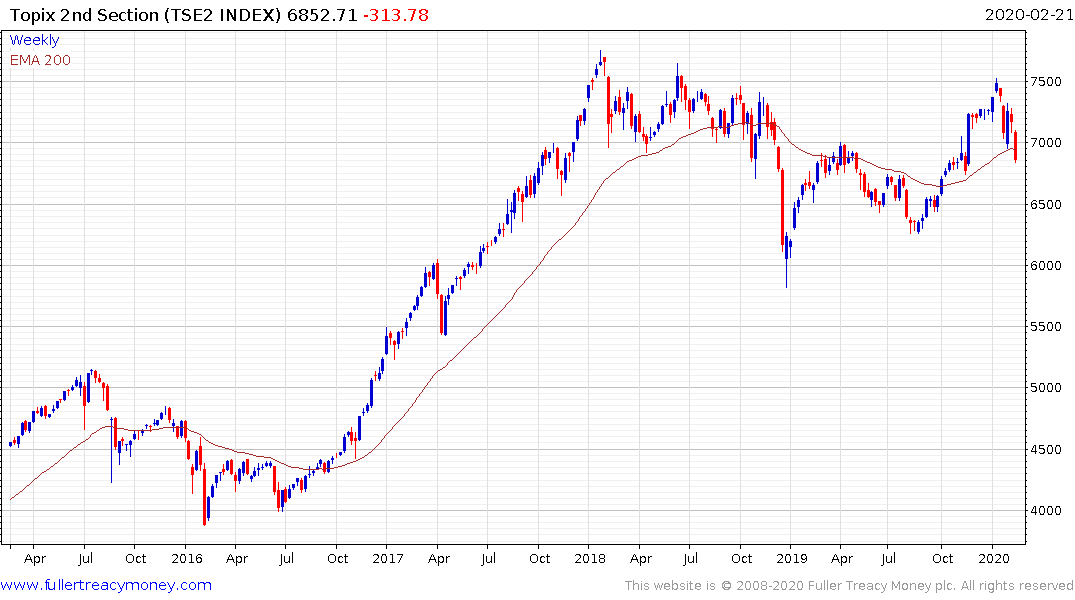 The relative weakness of the Topix 2nd Section index suggests scope for a deeper process of consolidation.

The additional point made by the Politburo today in China is the peak infection rate has not yet been reached. The lack of reliable data and the long incubation period mean the cost of successful containment and isolation is exorbitant and even then, it is near impossible to monitor exactly how many people have in fact been infected. Therefore, we have to question how is it possible to make investment decisions based upon inaccurate, incomplete or fabricated data. This report from Imperial College London estimates two thirds of cases coming out of China have gone undetected.

Bill Bishop highlights in his Twitter feed that the Politburo… readout also says the "turning point of the national epidemic has not yet arrived" and makes the point of emphasizing “Efforts should be made to prevent and control the epidemic in Beijing“, so they must be very worried about Beijing.

Locking down a tier-1 city in China is a much more economically detrimental measure than doing the same in a regional province. Meanwhile the WHO says it is concerned with an additional increase in cases in a Shandong prison, which is in Northern China or about 1000km from Wuhan.

The market has priced in a V-shaped recovery and the Communist Party is continuing to push the view they will have stamped out the virus within six weeks. However, the risk is we are looking at a U-shaped recovery with a longer timeline before economic activity picks back up. Meanwhile majority of stock market indices have short-term overbought conditions and are prone to some additional consolidation of recent gains. 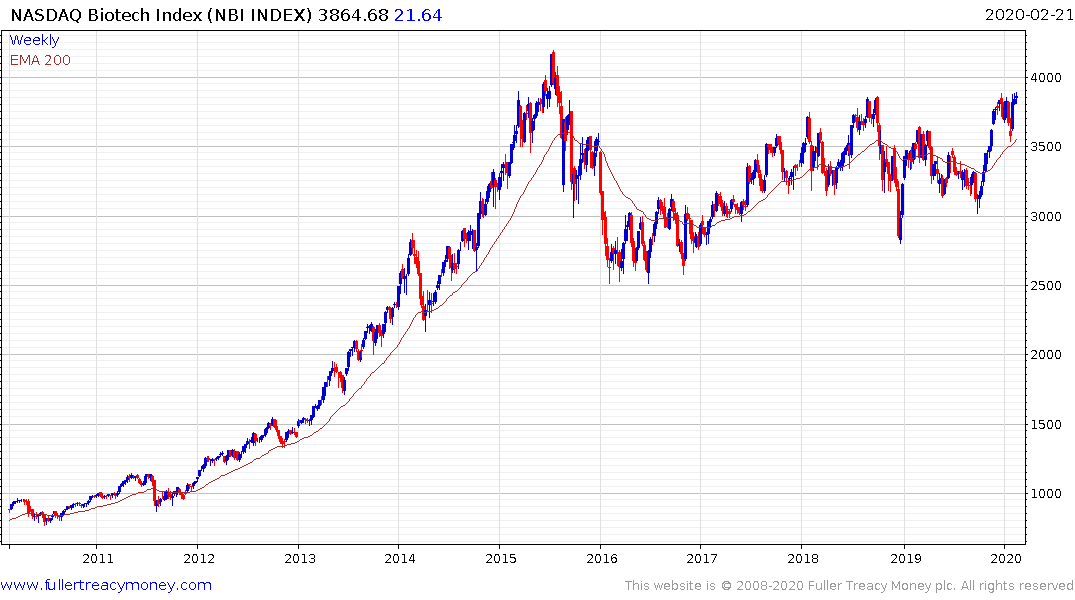 The Nasdaq Biotech Index is testing the region 2018 peak and has been putting an orderly consolidation over the last couple of months, suggesting scope for additional upside.

A topic of discussion I believe is circulating in the halls of power in China is the relative cost/benefit of giving up on containment and pouring all available resources into treating the most badly affected. If the disease successfully spreads significantly beyond Hubei, the option of shutting down the entire country is a non-starter beyond a few weeks. The northern portion of the country has been doing the heavy lifting in getting back to work but if that changes the drag from China on the rest of the world will be even more exaggerated.

If the mortality rate is 1% it is still ten times more deadly than the seasonal flu. Anywhere from 200,000 to 600,000 die from seasonal flu every year. That would bring the death toll from this coronavirus up to close to 6 million. However, if the mortality rate is 2%, as seems likely, we are talking about, potentially,12 million deaths. The aged and those with chronic conditions are most at risk. We may look back in a year and conclude this is the . 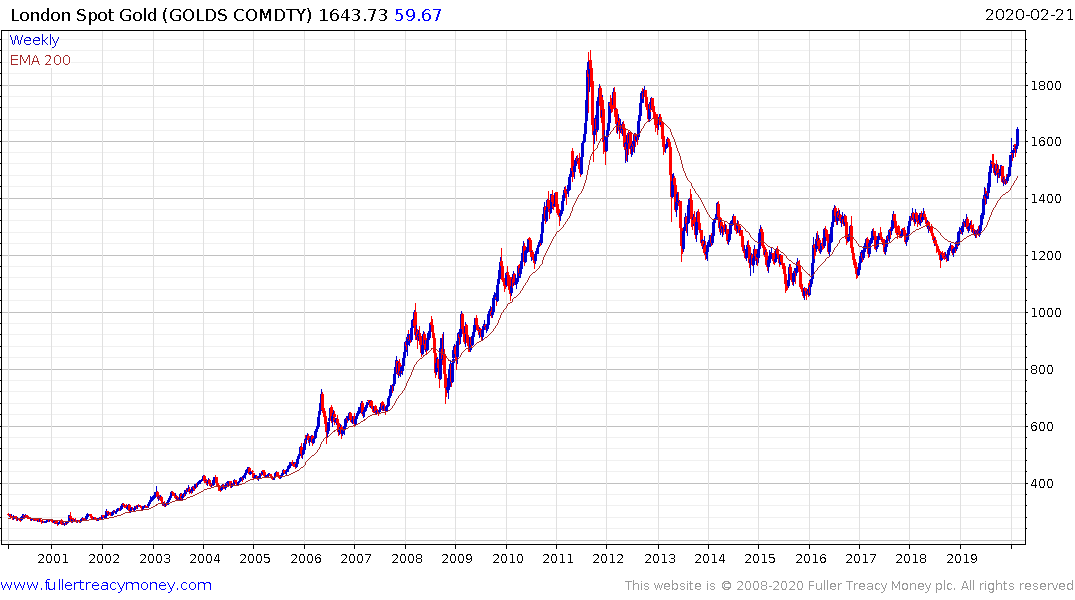 The relative strength of gold is a strong indicator of demand for a hedge against the potential for a less than ideal outcome.