Can the gold industry return toÂ the golden age?
Comment of the Day

Can the gold industry return toÂ the golden age? by Eoin Treacy

High-grading deposits accelerated depletion. In the face of falling gold prices and cost pressure, many companies resorted to high-grading deposits – especially those companies with lower-grade and more complex ore bodies where margins are more sensitive to gold prices. In simple terms, high-grading is the mining of the highest-grade zones of an ore body to provide short-term economic benefit with the assumption that the remaining areas will be mined as gold prices improve. However, the reality is often very different, as the remaining ore body becomes only marginally economic, resulting in loss of ounces to the reserve base. High-grading probably offers gold mining companies the most efficient option to decrease costs in the short term, but for some, the long-term implication is that significant current reserves and resources will be made uneconomical. McKinsey’s analysis shows that in 2016, approximately 60 percent of gold operations were mining with mill head grades above the mine’s reserve grade. While mine sequencing may provide the explanation in some cases, in large part this practice was deliberately designed to increase cash flows and keep operations in the black. Significant operations where high-grading has been observed include Granny Smith, Cerro Negro, and Turquoise Ridge. It is estimated that approximately 100 to 200 tons of additional metal was produced by the gold industry as a result of high-grading at the expense of reserves over the period between 2012 to 2016.

Miners of all hues are in the extraction business and that comes at a cost which varies based on both internal and external factors. When the commodity price is low, they have no choice but to mine the richest ore bodies available because to do otherwise would likely lead to insolvency. When prices rise, they engage in M&A activity because they have to replace that ore because grades have deteriorated. 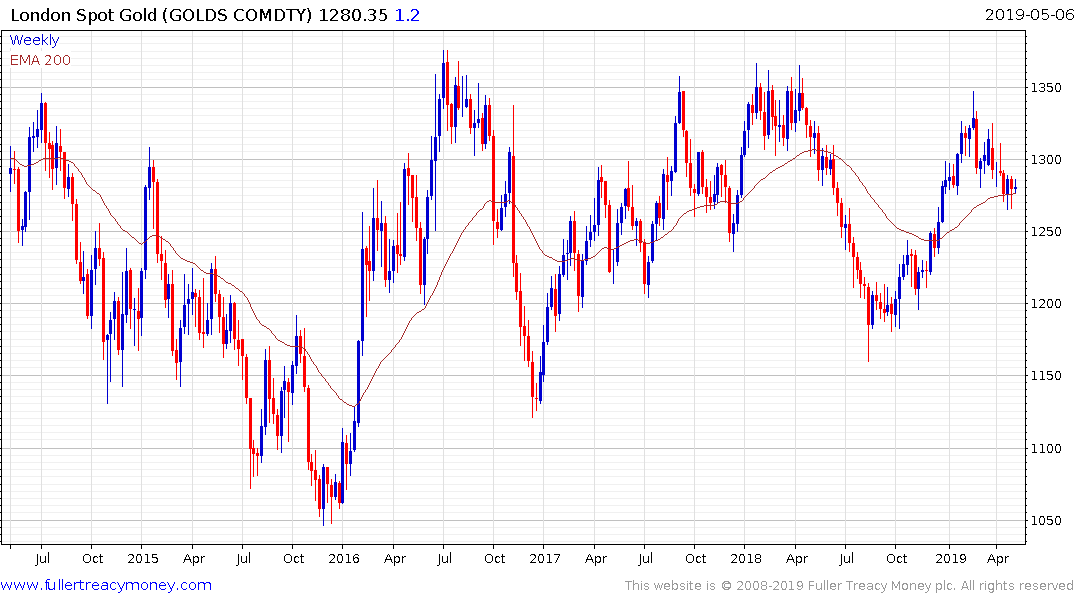 There has been an uptick in M&A activity recently but this has been sporadic and is more about consolidation of large operations than improving average grades. Acquisitions of smaller miners with promising reserves has not yet occurred because executives are still shy about making bets amid a price environment which is still unproven. When/if gold sustains a move above $1400, it would be natural to expect M&A activity to pick up.

Right now, gold is steady in the region of the trend mean but needs to at least rally enough to break the short-term sequence of lower rally highs to signal a return to demand dominance.