Nickel climbed to a fresh six-month high in London as rallying steel markets, falling inventories and rising electric-vehicle sales bolster the outlook for the metal. Industrial commodities increased as markets were soothed by China’s announcement of a major tax cut and optimism that a resolution with the U.S. over trade is in reach. Prices advanced even as the world’s biggest consumer trimmed its growth target for the year. Steel futures are up this year and the outlook appears brighter as China plans to trim the value-added tax rate that covers the manufacturing sector and as the usage of electric-vehicle batteries gains momentum.

“We’ve seen that metals like nickel, zinc and tin, which feed into the ferrous sector, have all been on a bit of a tear recently,” Robin Bhar, an analyst at Societe Generale, says by phone from London “Nickel could still be the darling of the complex, given the uplift that you have from batteries”“ Chinese stimulus measures are aimed at goosing consumption and helping manufacturing, so the best-positioned metal is probably copper,” Tai Wong, head of base and precious metals derivatives trading at BMO Capital Markets, says by email “I think nickel is a spec play and if the rolling ball of money is back, it can definitely drive it a long way”

8:1:1 battery chemistries in the Tesla Model 3 are going to be deployed in just about all electric cars in the coming years. That represents a significant growth story for nickel but most particularly for nickel sulphide which is a purer form of the metal that falls outside of the delivery parameters set for futures trading at the LME. That suggests there is going to need to be substantial investment in higher grade production of the metal.

Privately held, Tsingshan Holdings has a plan to do for battery materials what it did for nickel pig iron in the stainless-steel sector. The announcement it was going to try and put low grade ore through a tougher refining process was one of the primary factors in the decline seen in the latter half of last year.

Here is a section from the story form Bloomberg dated October 28th:

“The general fear is that if they can make it work, the nickel price won’t really need to go much higher," said Colin Hamilton, managing director for commodities research at BMO Capital Markets Ltd., who estimates that a price of $14,000 a metric ton could justify further investment in such Indonesian projects. “If it wasn’t Tsingshan doing it, people would be discounting it a lot more heavily." 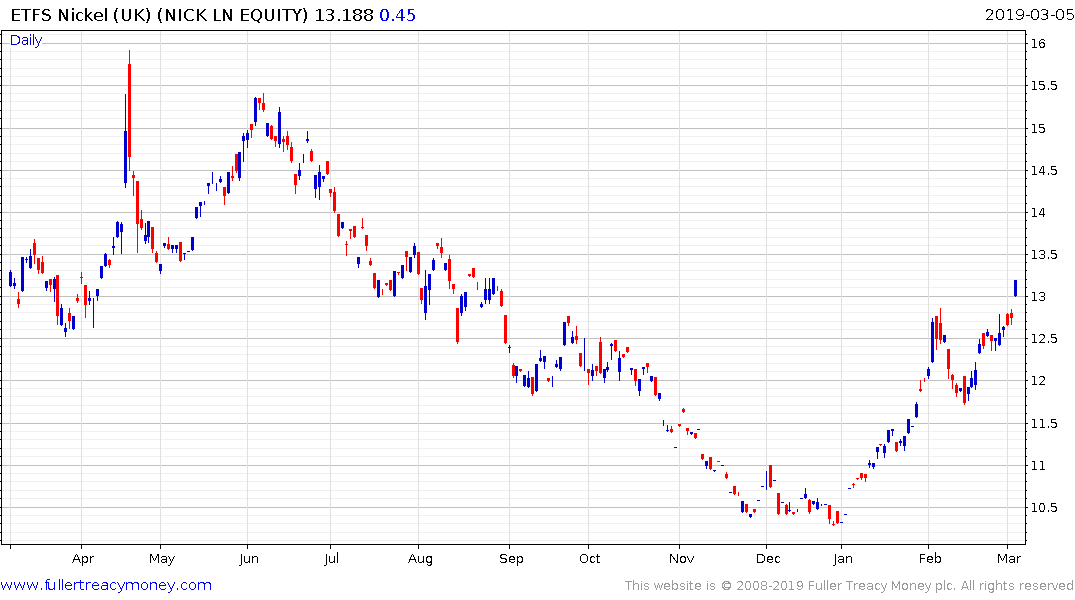 The big question is whether they can produce nickel sulphide in the quantities required and at an attractive cost to feed burgeoning demand. Meanwhile, the as yet unproven process will take quite some time to get up and running and nickel prices continue to rally.