"The workforce is becoming more and more global, so to attract and retain the best people, you need to be prepared to pay competitive salaries," said Marc Burrage, managing director of Hays Japan. Seniority-based pay systems are among the reasons for Japan’s low salaries, he said. "It’s a concerning situation and if it’s not addressed soon, it will start to bite in terms of productivity."

Mrs. Treacy is planning a trip to Japan in April to source Akoya pearls so the girls and I will be tagging along to Kobe and Osaka. I asked a long-time subscriber in Japan what his perception of rising inflationary pressures is. Here is his response:

Inflation, no major changes yet, i.e. supermarket prices, cost of education, medical costs etc have not really changed for years. But a very large problem is just beginning to develop, LABOUR SHORTAGE. Including the farming area, the construction industry (which incidentally even after allowing 30,000 foreign construction workers into Japan last year had a net industry loss of almost 300,000 workers), the health care industry, especially for the elderly, small companies, especially with less than 30 workers, the education area covering new mother’s needs, who want to go back to or start work, in fact a whole slew of areas are facing major labour shortages. There is, surprisingly, no wage inflation yet, but surely it is only time? Interestingly, one of China's main mobile manufacturers are building a plant here and plan to offer graduates circa 4 times the starting salary they could expect from a Hitachi, Fujitsu, Panasonic etc. I also hear foreign companies, including Air Liquid of France, has such a problem attracting workers here, they are cancelling current employee’s holidays.... It's in the pipeline, but just not appearing yet.

Many Japanese firms still abide by seniority-based pay scales but the fact remains that Japanese workers are paid below the norms for their sectors in other countries. With interlopers offering multiples of basic salary for fresh young recruits it is only a matter of time before pressure comes to bear on domestic companies to increase compensation. Wage growth is the missing ingredient for most countries in the evolving case for a return to an inflationary bias. 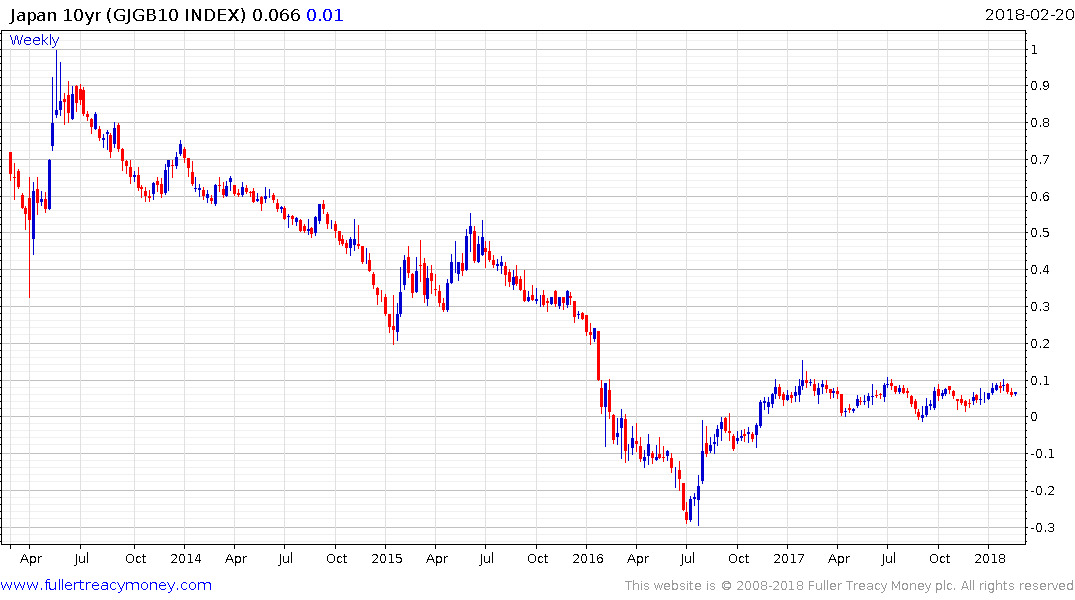 JGB yields are being held below 10 basis points by the BoJ but this chart of historical inflation protected yield curves suggests that the negative yield bias evident in the market is trending back up towards at least a neutral bias.

As an aside, the yield charts for inflation protected bonds do not appear to be very liquid and have some quite pronounced steps in the data suggesting not only coupon changes but alterations in how inflation data is measured. 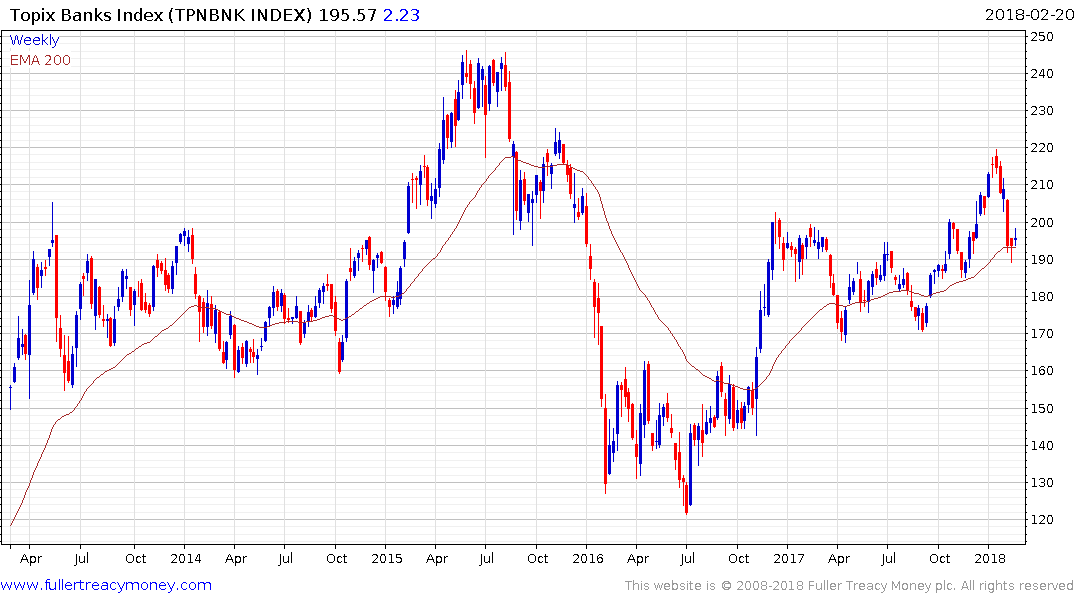 If inflation is in fact a nascent force in Japan then the banking sector should continue to benefit not least because an improvement in interest rates will act as a tailwind for the sector. The Topix Banks Index is currently firming from the region of the trend mean and a sustained move below it would be required to question medium-term scope for additional upside.