Speculation is mounting that Moody’s will be the second rating company to lower Brazil’s grade to the precipice of junk as the economy suffers its biggest contraction in a quarter century and a bribery scandal frustrates the government’s efforts to restore its finances.

Moody’s, which met with officials in Brazil last month, cited the country’s economic woes and deteriorating finances when it put the Baa2 rating on negative outlook in September.

Things have only gotten worse since then, with Moody’s predicting in a July 16 report that gross domestic product will shrink 1.8 percent this year.

Just last week, Standard & Poor’s also revised its outlook on Brazil’s rating to negative. An S&P downgrade would plunge Brazil back into junk since the company rates Brazil BBB-, one level below Moody’s.

“Banks are a leveraged macro play and as such, given the recession, I see the bonds expensive,” Jorge Piedrahita, the chief executive officer of New York-based brokerage Torino Capital LLC, said in an e-mail.

The economic pressure Brazil is experiencing is perhaps most evident in the collapse of the Real which has almost completely unwound the bull market associated with the commodity bull market. The great tragedy is that the country squandered the economic dividend of an almost decade long commodity bull market by failing to introduce regulatory reform, build critical infrastructure and combat corruption. As Warren Buffett says “You don’t know who’s been swimming naked until the tide goes out” On the plus side the Olympics next year and World Cup in 2018 will be fun but are hardly relevant for investors. 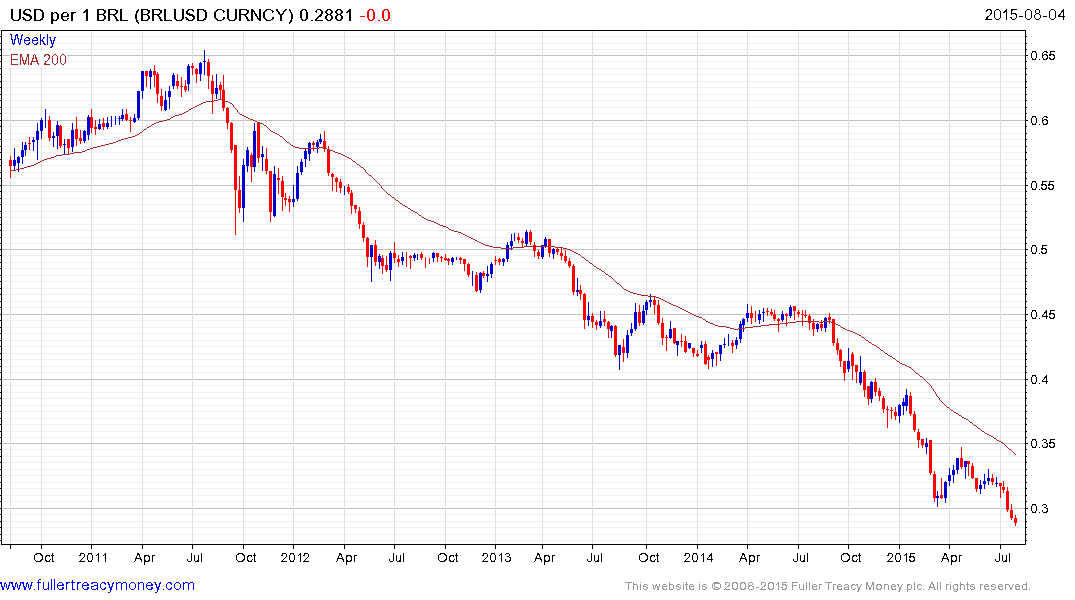 The Real has been trending lower against the US Dollar since 2011 and is rapidly approaching the lows posted in 2002. It is somewhat oversold in the short-term but a break in the medium-term progression of lower rally highs would be required to question supply dominance. 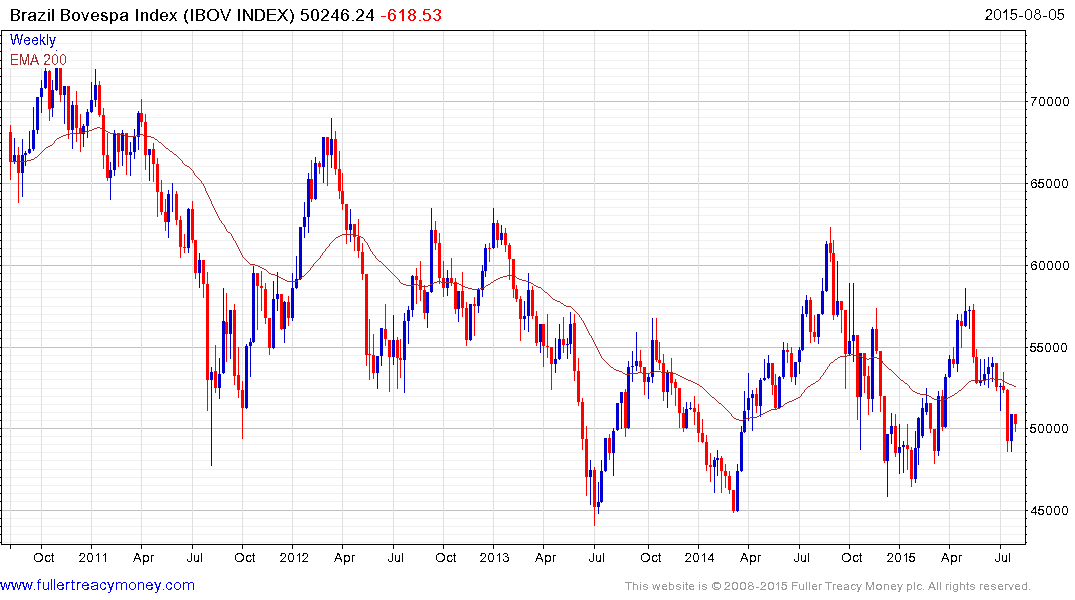 While the domestic Index has been relatively steady in nominal terms bank ADRs are breaking down. 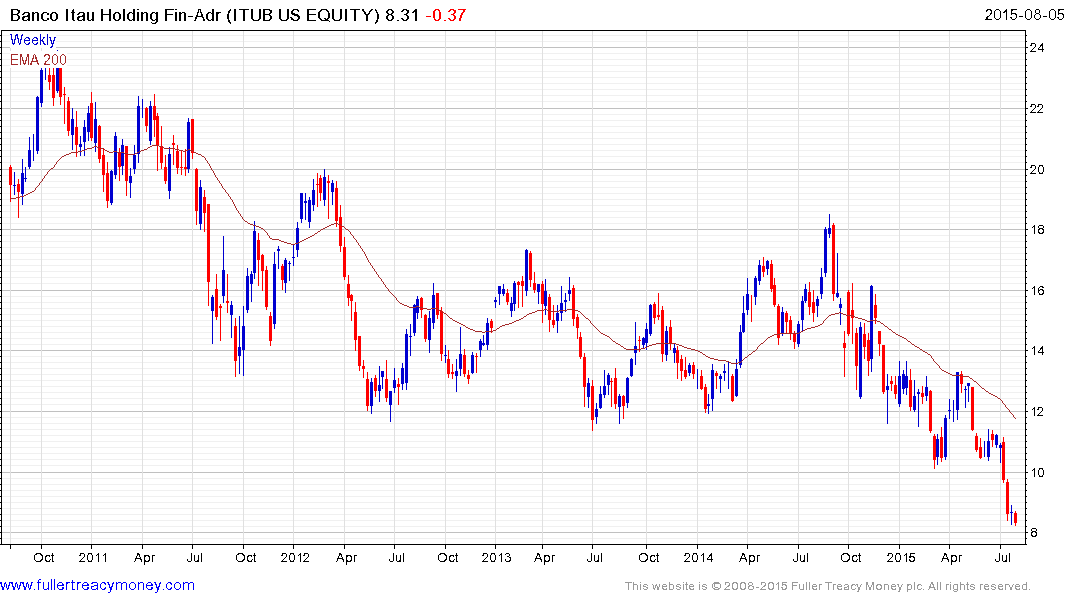 Itau Unibanco had been ranging mostly above $10 but broke downwards three weeks ago and extended the decline today. 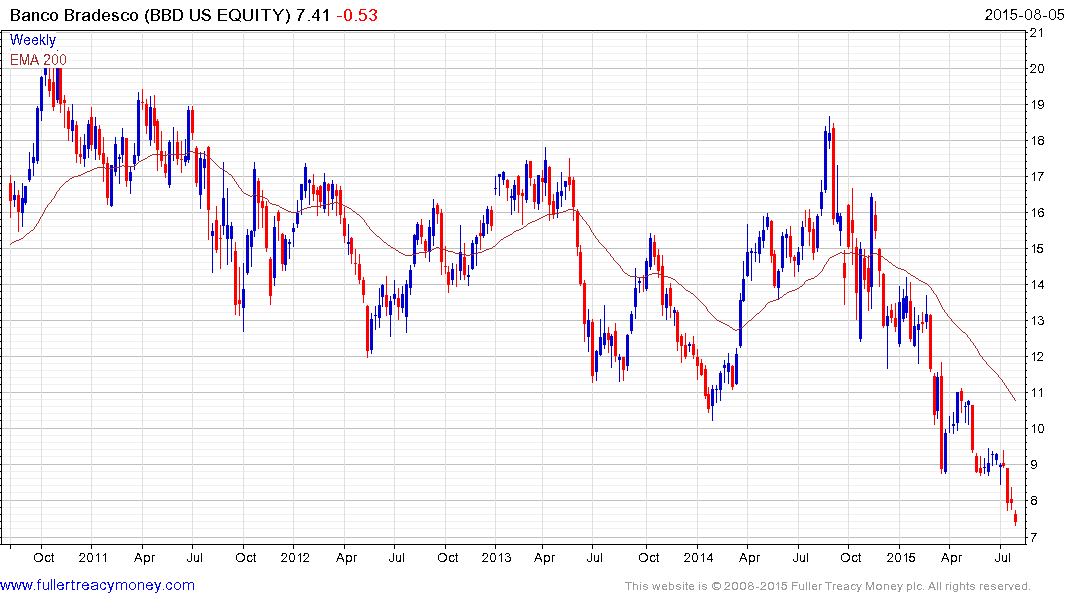 Banco Bradesco has a similar trajectory.

Clear evidence that selling pressure is losing impetus and short covering is underway will be required to check these declines.