One in five people who were working in February reported losing a job or being furloughed in March or the beginning of April, the data showed, and that pain was highly concentrated among low earners. Fully 39 percent of former workers living in a household earning $40,000 or less lost work, compared with 13 percent in those making more than $100,000, a Fed official said.

The U.S. economy began slowing in March as state and local governments instituted stay-at-home orders to tame the coronavirus’ rapid spread. That has most likely caused the steepest growth decline in the United States’ postwar history. Consumer spending has plummeted as stores and restaurants closed, and mass layoffs have become a feature of everyday life. Nearly three million people filed for unemployment benefits last week, pushing the two-month tally over 36 million.

Among those who had lost hours or jobs amid the pandemic, 48 percent were “finding it difficult to get by” or “just getting by,” according to the survey. Just 64 percent of those who had taken an employment hit felt that they would be able to pay their bills in April, compared with 85 percent of those without a work disruption.

Those challenges came as a large swath of Americans took pay cuts. About 23 percent of all adults, and 70 percent of those who had lost their jobs or their hours reduced, said their income was lower in March than in February.

Here is a PDF of the full article.

We’re All In This Together” has been the rallying cry of media outlets during lockdowns. However, that is no exactly true. Some people are doing fine working from home while others are in dire straits. For people who went into the lockdowns with little to now savings, they are likely to come with even less. That represents a challenge for societies everywhere because the issues of inequality that have been such a cause celebré for populists are going to be magnified going forward. 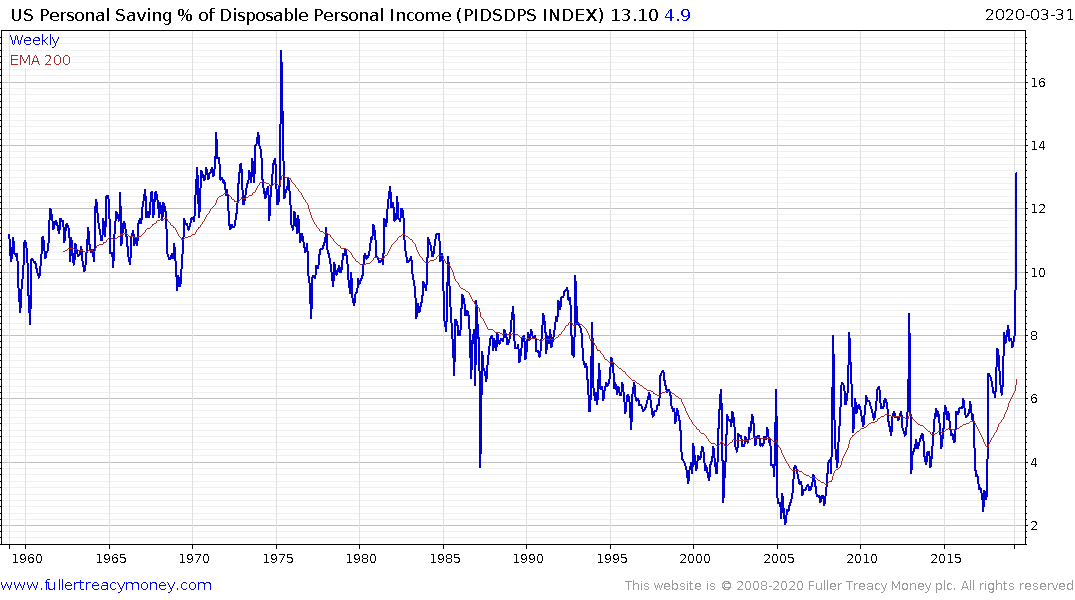 The US Personal Savings Rate as a Percentage of Disposable Income is back at levels last seen in 1981 but has been trending higher since 2006. The downtrend of the previous decades has very clearly broken. That is as much as demographics and the maturing of the baby boomer generation as it is about a reticence to speculate in the aftermath of the credit crisis.

However, it is worth remembering that the ratio is an average for the whole country and many people now have zero disposable income. If they have been excised from the calculation, that flatters the calculation and more accurately reflects savings among wealthier households. If they are still included it suggests inequality is widening at an alarming rate.

The personal savings ratio has been used as a rationale for thinking the US consumer is gong to come through the economic crisis in fine fettle but that is likely only true for about half of society. Of course, that is the half that tends to have pensions and owns stocks so from a markets perspective it is the half that matters. From a political perspective the other half might have something to say about that condition. The easy conclusion is the coronavirus is going to widen the chasm of political polarisation just about everywhere. The clear solution will be to try and get people back to their normal lives as soon as possible which is why there is such political will to reopen economies urgently.

This article from the Petersen Institute for International Economics may also be of interest.

This article from the Wall Street Journal may also be of interest.