Peak Rate of Change on Growth and Inflation?
Comment of the Day

Peak Rate of Change on Growth and Inflation? by Eoin Treacy

While all of these measures have moved sharply higher, they also appear to have peaked from a rate of change stand point with the shorter tenures of the breakevens markets rolling over the hardest along with consumer expectations. The point here is that just like with many of our growth measures, it appears that the peak rate of change for inflation may be behind us. This hasn't been lost on the Treasury market with both nominal 10 year yields and breakevens showing substantial reversals of their sharp moves higher over this year. We think could be an early signal that both growth and inflation may start to disappoint what are now lofty expectations. The culprit in our view is a first quarter level of demand that was aided by $1.9 trillion fiscal stimulus and a rise in crypto currencies that added another $1 trillion to wealth. Neither one of these are likely to be repeated in our view; and in the case of crypto, there has been an approximately $ trillion reduction of wealth in just the last month that could have a negative effect on demand/spending.

Bottom line, we still think growth and inflation will be quite strong over the next year. However, the first quarter experienced extraordinary demand that we think is likely to mark the peak rate of change for both. The Treasury market appears to agree, not to mention some of the more cyclical equity sectors, especially early cycle ones like autos, home builders/improvement, retailers, semiconductors and transports (Exhibit 4).

The theory that growth and inflation are likely to moderate in coming quarters, following the blowout moves in the 1st quarter, is reflected in the bond market where yields have been locked in a range for the last three months. 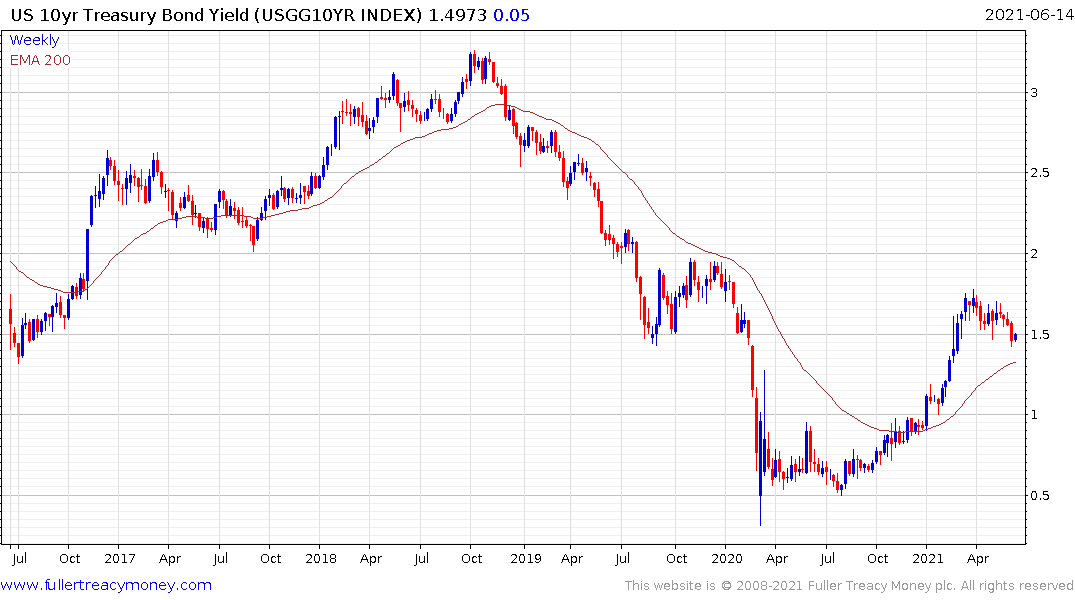 The challenge for investors is there is a big difference between the inflation economists and central banks monitor and the inflation we feel on a day-to-day basis.

Lumber has peaked and the fate of many soft commodities depends on drought conditions in the Western USA and Latin America persisting. However, while these are some of the most obvious forms of inflation right now, there are longer-term considerations that are also worth considering.

Both consumers and central banks focus on lodging costs. The increase in home prices and the upward pressure on rents as we come out of the moratorium on evictions could help to push these measures higher. 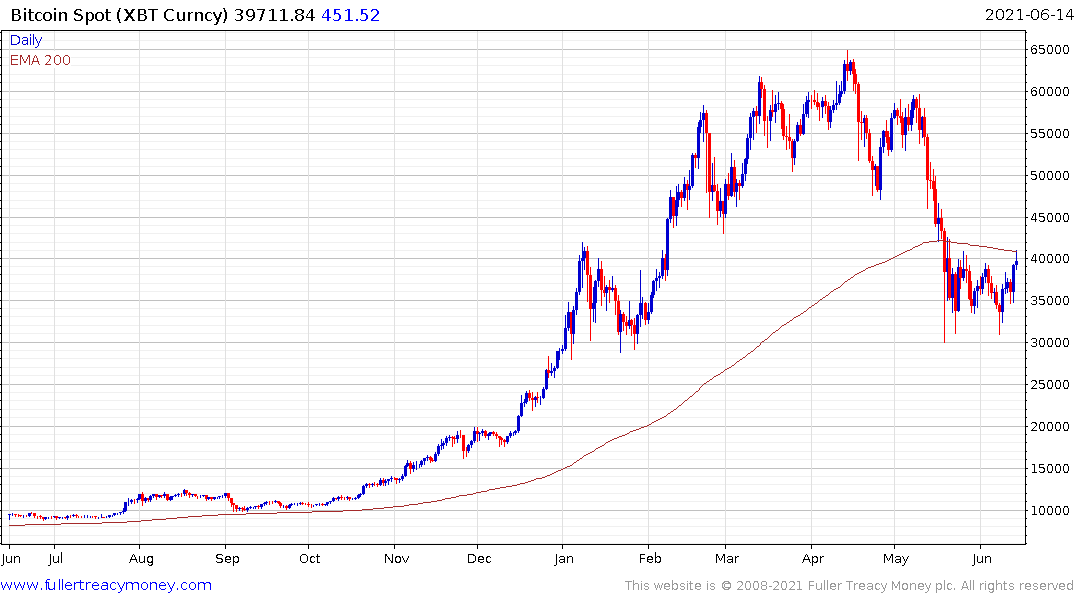 The contagion effect of a 50% decline in bitcoin on consumer spending is a potentially significant factor in this quarter. The effect on the wider stock market has been limited to date, and not least because of continued monetary and fiscal support.

Bitcoin traded back above the psychological $40,000 level today and is in within striking distance of the region of the 200-day MA. A sustained move the trend mean will be required to confirm more than short-term steadying.

Here is a section from a Bridgewater report focusing on the economic contagion issue:

When there is a loss in paper wealth, people typically reduce spending in the real economy, as they feel less financially secure. This negative wealth effect from crypto’s latest drawdown may have a relatively greater impact on real economic spending than comparable losses in more traditional markets (e.g., equity markets), given that recent gains in cryptocurrencies appear to have been largely fueled by an increasing share of smaller retail participants. These new cryptocurrency investors seem likely to be marginal spenders who could pull back consumption in response to the cryptocurrency losses. On the other hand, the impact on consumption may be partially mitigated due to frictions associated with converting crypto assets, including USD stable coins, back into fiat currencies that can be spent in the real economy.

A lot of positioning over the next few days is betting on the outcome of the Fed meeting on Wednesday. I am reluctant to draw strong conclusions until the threat of tapering has bene dispelled. While asset price appreciation and meme stock accelerations may be cause for central bank caution, the big questions about the path to full reopening have yet to be answered. That suggests to me there is little prospect of a big surprise. If growth and inflation expectations are close to peaking the chances of any form of tightening are even more likely to be delayed.

As I discussed on Friday, inflation is both a monetary and psychological phenomenon. This story covering the trend of companies taking 3-year charters for oil tankers is noteworthy. It implies they expect prices to rise and are acting accordingly. Consumers and companies acting in anticipation of higher price expectations is a primary symptom of inflationary psychology creeping in.