The world has turned its back on austerity. Keynesian reflation doctrines are triumphant. The Biden administration explicitly aims to run the US economy hot, with the help of the Federal Reserve.

This spending may be low-carbon in ultimate effect but in the short-run it is brown. The transition requires infrastructure. It requires bulldozers and trucks. It requires the mining of iron ore and thermal coal, and the shipment to steel foundries. It trumps the $10 trillion infrastructure blitz by China, India, Brazil. and the emerging market "mini-BRICs" of the last commodity supercycle.

If future demand is large, the shortfall in future supply is even larger. Investment of $600bn a year in non-Opec exploration and drilling is needed to keep the global show on the road. Spending collapsed after 2014 and has never recovered. Last year it was $300bn. It has been running at just 35pc of levels reached in the boom.

This catches up with you in the end. The last two super projects to enter supply were Norway’s Johan Sverdrup and the Exxon-Hess Guyana venture. Henceforth it is a drought.

Goldman Sachs estimates that 9m to 10m barrels a day of future supply have vanished. That is a tenth of the world’s 100m barrels a day production. Remember that a swing of just 1m either way in normal times can flip the market from slump to price spike. Short-term demand is inelastic.

The elephant in the room is falling supply from non-Opec producers. These companies and regions (excluding US shale) were gently adding 500,000 barrels a day annually a year until recently. Goldman Sachs thinks they will soon be subtracting up to 1m barrels a day each year.

The pandemic has distorted the immediate picture but not the underlying dynamics. Global demand has fallen by 6m barrels a day. Two thirds of that is jet fuel. Aviation will come back fast as soon as the flying world is vaccinated.

The world has turned its back on austerity. Keynesian reflation doctrines are triumphant. The Biden administration explicitly aims to run the US economy hot, with the help of the Federal Reserve. Global "green deals" amount to $16 trillion. “It’s going to turbo-charge oil demand in 2022,” said John Hess, head of Hess Corp.

The commodity supercycle argument has become very popular all of a sudden among institutional investors. The trillions devoted to green tech commitments are expected to fuel a global infrastructure boom which is positive for industrial resources.

When China entered the WTO, it embarked on the biggest building boom the world has ever seen. That primarily drove demand for oil, coal, iron-ore, copper and cement.

However, the whole basis for the new supercycle argument relies on displacing oil. We are unlikely to see a multi-year rebound in the pace of demand growth. 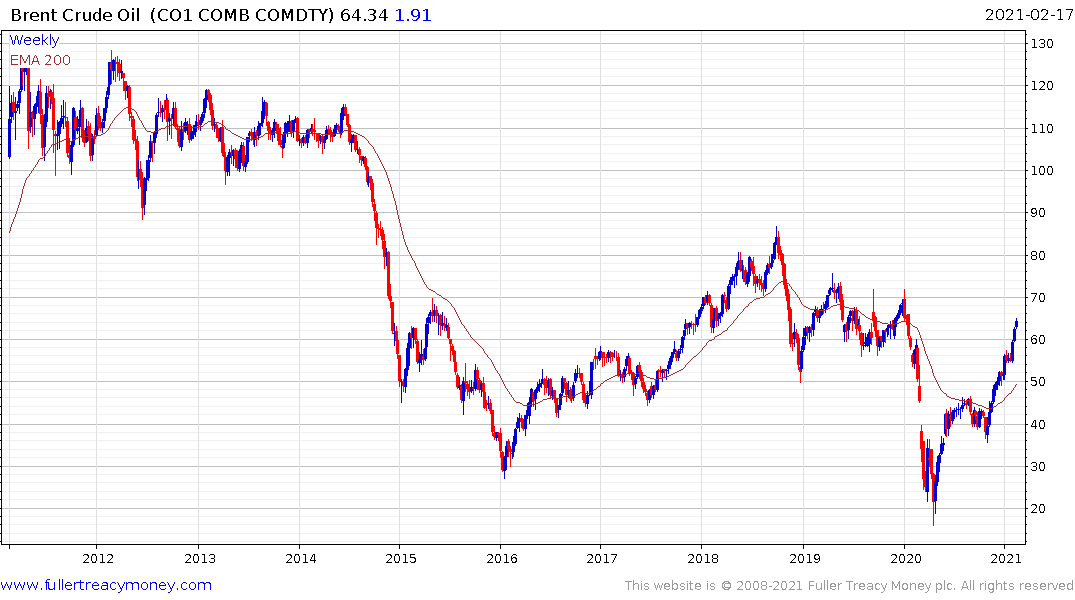 Oil prices continue to rebound and nothing has occurred to question the upward trajectory. The higher prices go, the more economic marginal supply becomes. It’s not like the world has to spend a lot of money to go and find new supply. There is plenty of deep water and bitumen that can be brought on line in a reasonably quick manner. It is only a question of achieving a price at which that production can be hedged at profitable levels.

I have some sympathy with the short-term bullish argument. The pandemic has created all manner of dislocations in supply and supply chains. 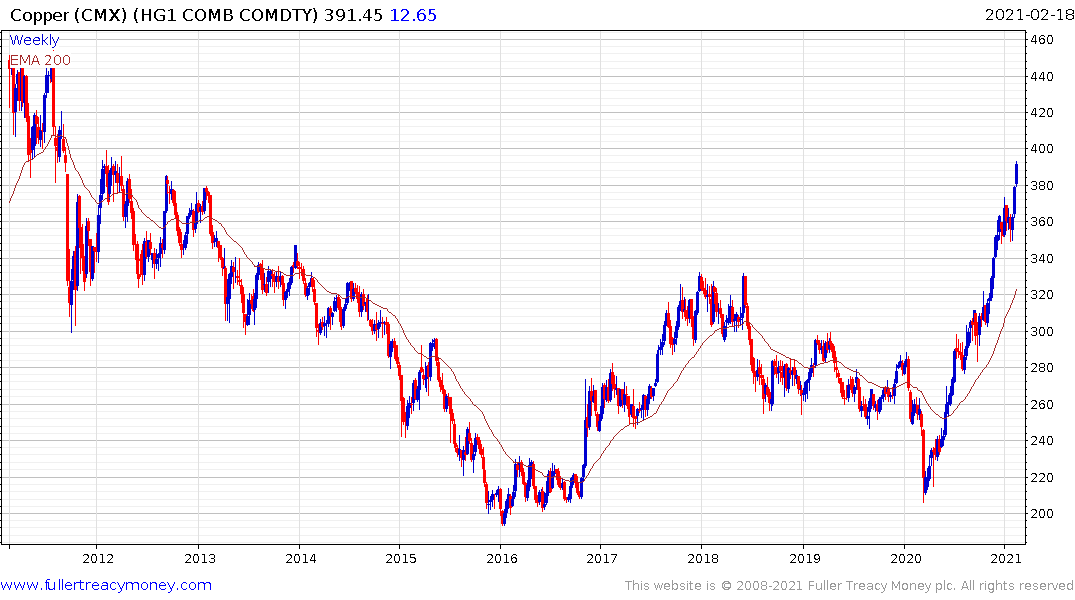 Meanwhile copper has both supply inelasticity and whole new sources of future demand. This is where the clearest supercycle argument resides. 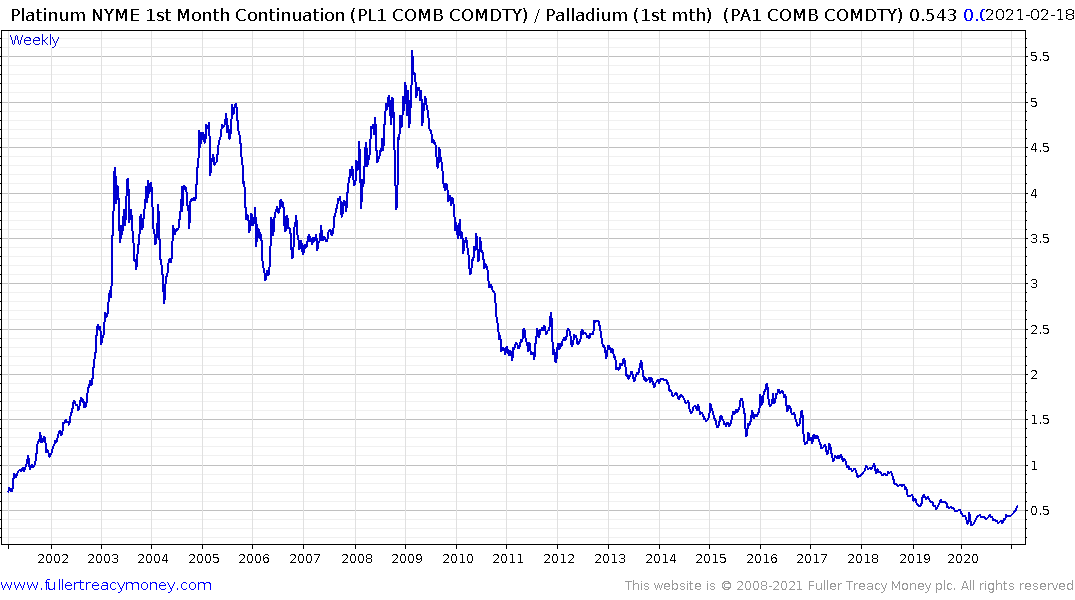 As we look at the migration of interest from internal combustion engines to alternatives the platinum/palladium ratio continues to offer a graphic illustration of the change of trend which is still in its gestation phase. 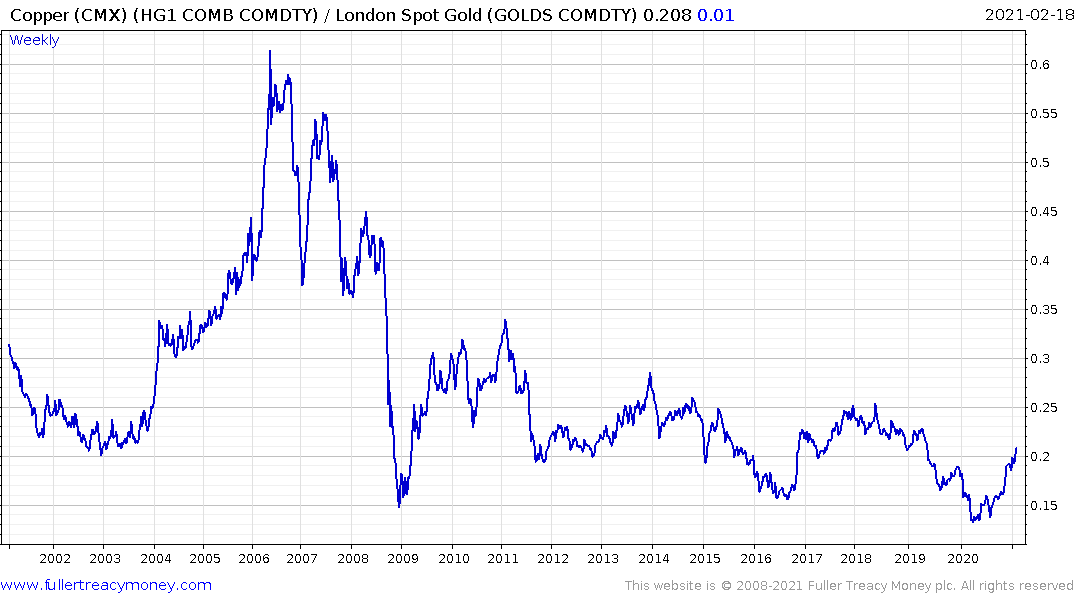 The copper/gold ratio continues to rebound and is well on its way to recovery. It is often a lead indicator for yields so there is scope for further pressure on the bond markets.