The People’s Bank of China is catching its breath after it cut the one-year medium-term lending facility rate last month -- the pause won’t last long. The central bank has signaled it’s ready to deliver more support to prop up growth. We expect the next cut as soon as the second quarter, and see the PBOC delivering another one in 3Q -- part of a broader array of easing measures to counter the slowdown. --David Qu and Chang Shu, China economists

Despite the decision to hold the one-year policy loan rate steady Tuesday, the PBOC’s easing stance has set it apart from other major central banks including the Federal Reserve, which are tightening monetary policy to tame soaring inflation. The possibility that the Fed will accelerate the pace of rate hikes could restrict China’s room for further easing later this year as it could accelerate outflows.

Global demand for Chinese bonds has already slipped amid their shrinking yield premium. The yield gap on China’s 10-year sovereign bonds over similar-maturity Treasuries narrowed to 73 basis points last week, the least since 2019.

China wishes to put an end to the pattern of booming asset prices every time it eases policy. The kneejerk reaction of Chinese investors has always been to rush into property when liquidity eases. It has been the best performing asset, but prices are now also very high and affordability is an issue.

In 2005, the Chinese stock market has been trending lower for four years and it had been the worst global performer for two years in a row. The government announced they would backstop prices. Following that announcement, the market pulled back to test the low and the government’s resolve. They held true to their word. The market peaked two years later following a sixfold advance. 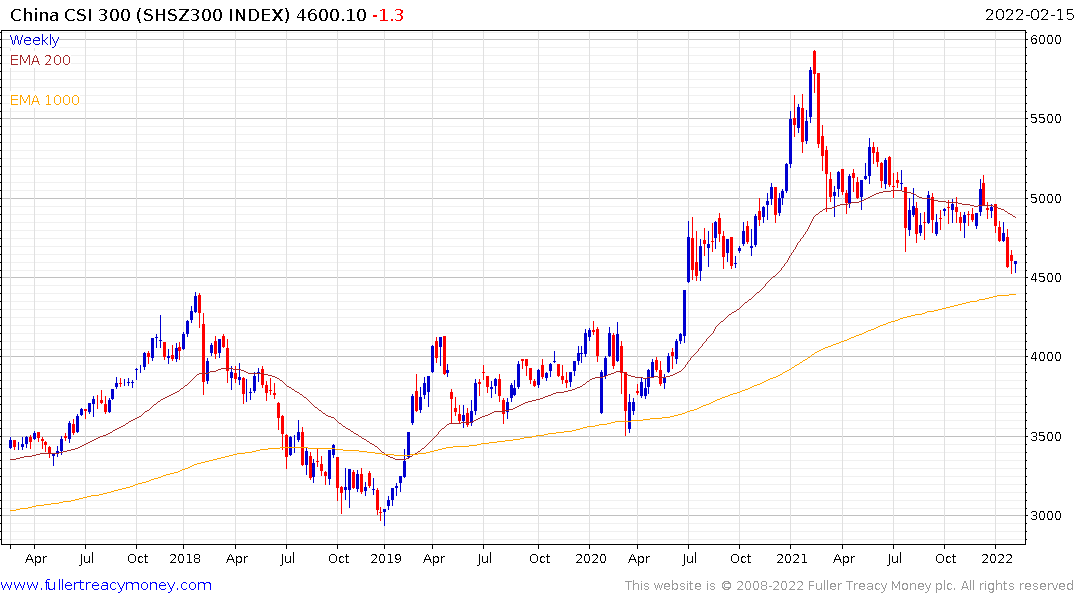 I don’t think that performance is going to be repeated on this occasion but the government does not want prices to fall. They will be happy with a ranging market. The CSI300 is testing the region of the 1000-day MA so it is natural area for support to be found if the broad ranging uptrend is to be sustained. Over the last week we have seen a range of measures announced to support prices. They will work albeit with a variable lag.

The best performers remain likely to be those with clear government sponsorship. That’s currently chips, batteries, renewables, and the metals required to enable these technologies. 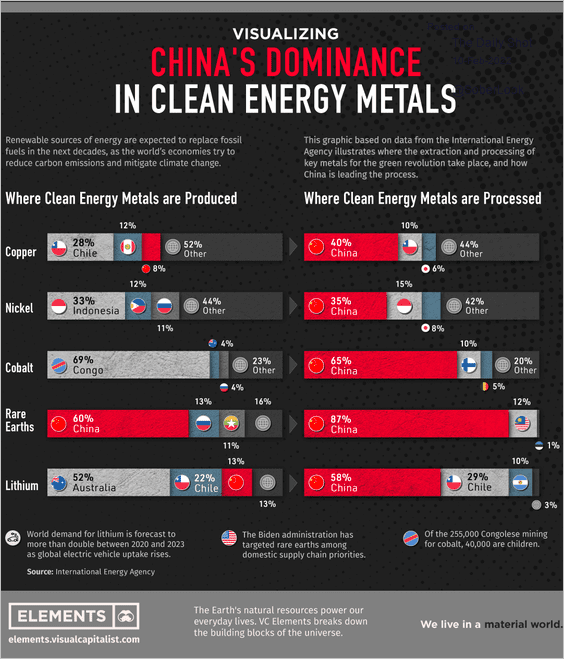 This graphic highlights the fact China is the dominant processor of all the metals necessary to build renewable energy infrastructure. It has a vested interest in seeing global demand rise.