PBOC, BOJ May Be Driving Some of the Stock Rout Infecting Asia
Comment of the Day

PBOC, BOJ May Be Driving Some of the Stock Rout Infecting Asia by Eoin Treacy

China hasn’t been this frugal in its cash offerings to banks in almost a year.

The People’s Bank of China has avoided net injections of short-term liquidity into the financial system since late last month, increasing concern that access to funds is becoming more difficult. The CSI 300 is headed for its steepest monthly loss in more than two years.

Japan’s Nikkei is falling for a fourth straight day after the BOJ said last Friday that it’s scrapping its annual target for stock purchases.

Stocks in both China and Japan had gotten used to these forms from the central banks. Now this backing, while not going away, is ebbing, and that could mean less central bank handholding for equities.

The PBoC has been quite vocal in stating they do not want a bubble to form. They have very different priorities from the Federal Reserve. China’s administration wishes to preserve social harmony at all costs. In their view that is the only way to ensure the continued survival of single party rule. That means they will prioritise stability over asset price growth in the property or stock markets. 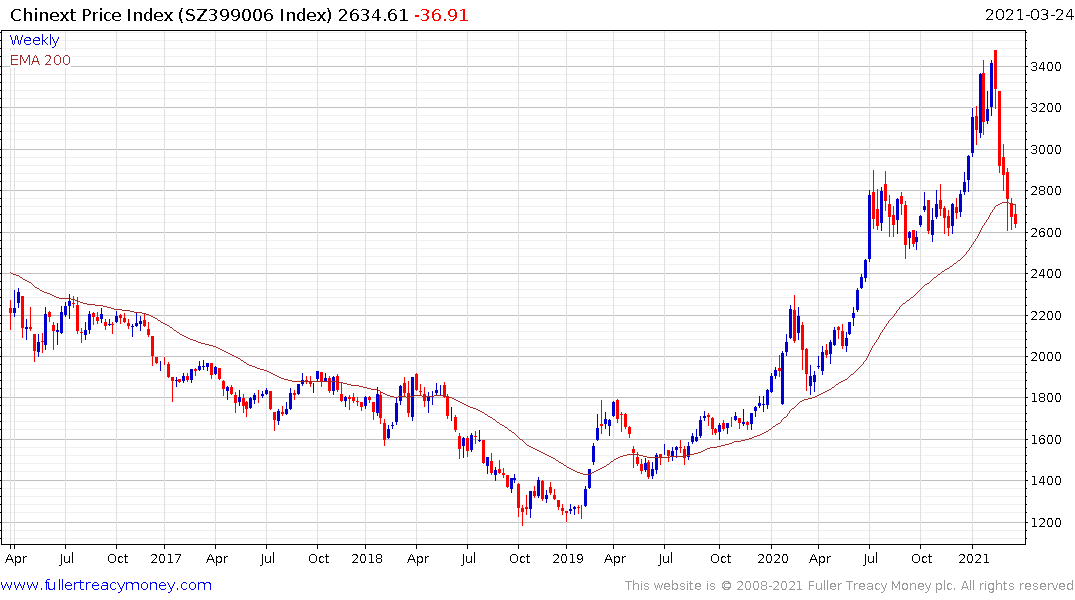 If that means restricting liquidity to the banking sector and curtailing the reach of the tech sector, those are deemed acceptable measures for China. The ChiNext Index is full of smaller companies that purportedly represent high growth. The Index has experienced it largest pullback since the lows and will need to find support soon if the benefit of the doubt is to be given to the recovery. 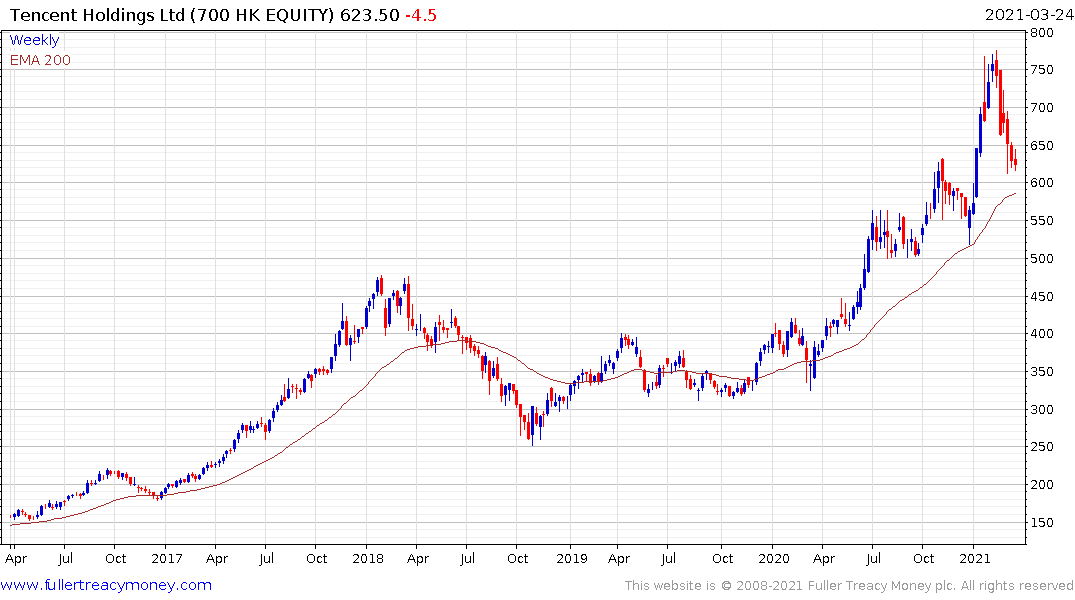 The greatest risk resides with the largest tech companies. This is about as clear an example of the Japanese idiom that “the tallest nail is hit hardest” I can think of. There are now limits on the ability of companies like Tencent and Alibaba to continue to expand. They have “lost the blessing of heaven”.

The challenge for the smaller high-growth companies is they will not be allowed to ever achieve the heights of the mega-caps which puts a cap on growth. That raises questions about what valuation is appropriate which is why they are correcting. 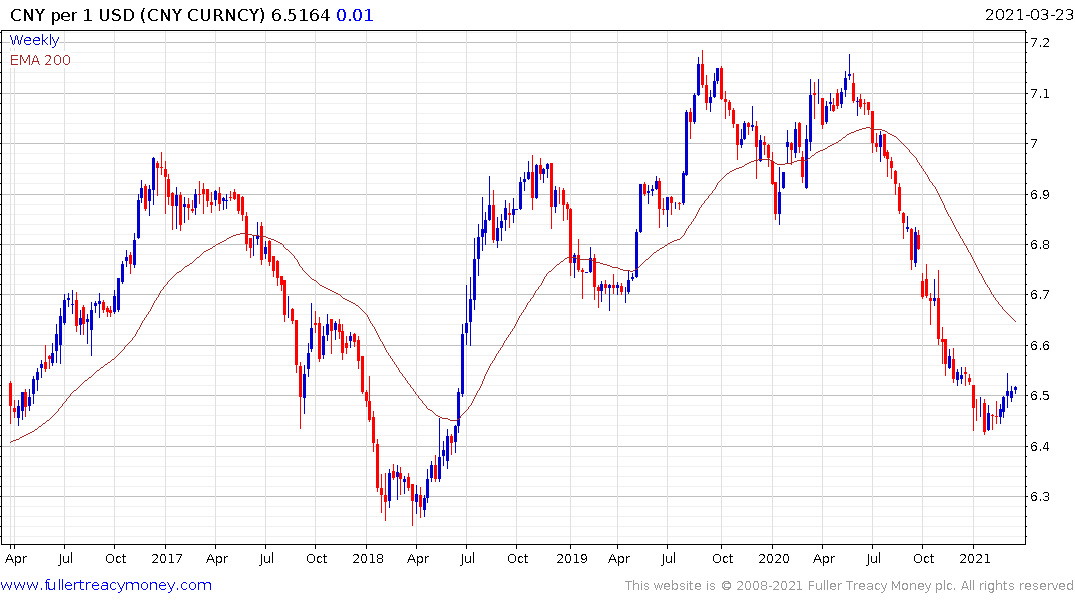 China has attracted a great deal of inward investment because of its higher growth credentials and sidestepping of the worst effects of the pandemic. The Renminbi is now unwinding its overbought condition which could also siphon capital from the stock market.

The Hang Seng Index is also continuing to unwind its overextension. 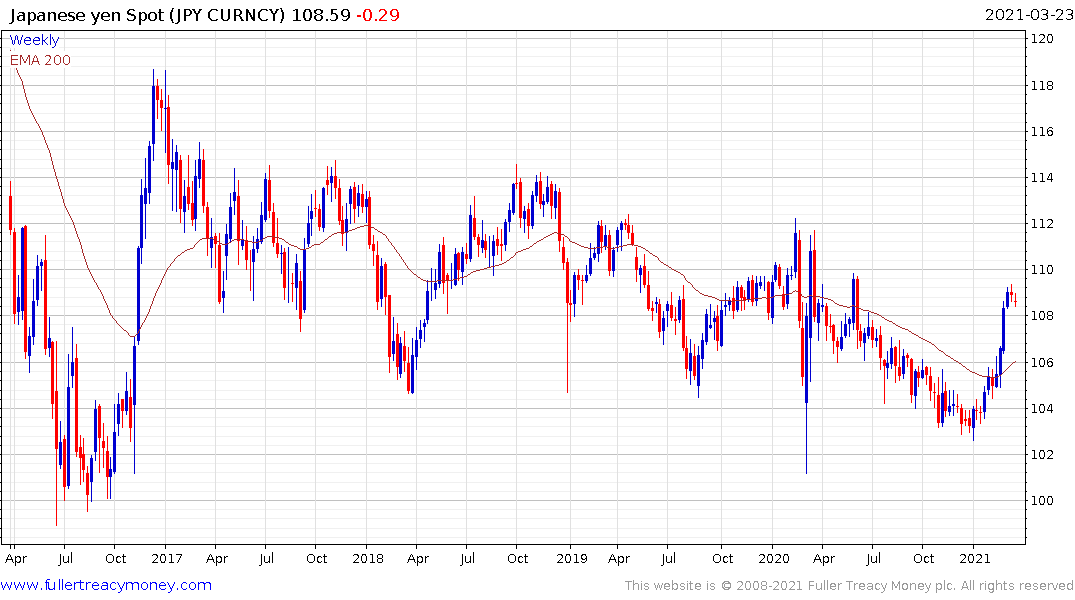 The Bank of Japan has been supporting the stock market for years with ETF purchases. Phasing those out could be a significant cause of near-term volatility. However, there are clear differences with the Chinese market. The most important is that the Bank of Japan is now expressing confidence that inflation is returning with sufficient vigour to be self-sustaining. They are also loosening the bands for yield curve control. These are big changes and are bearish for the Yen. 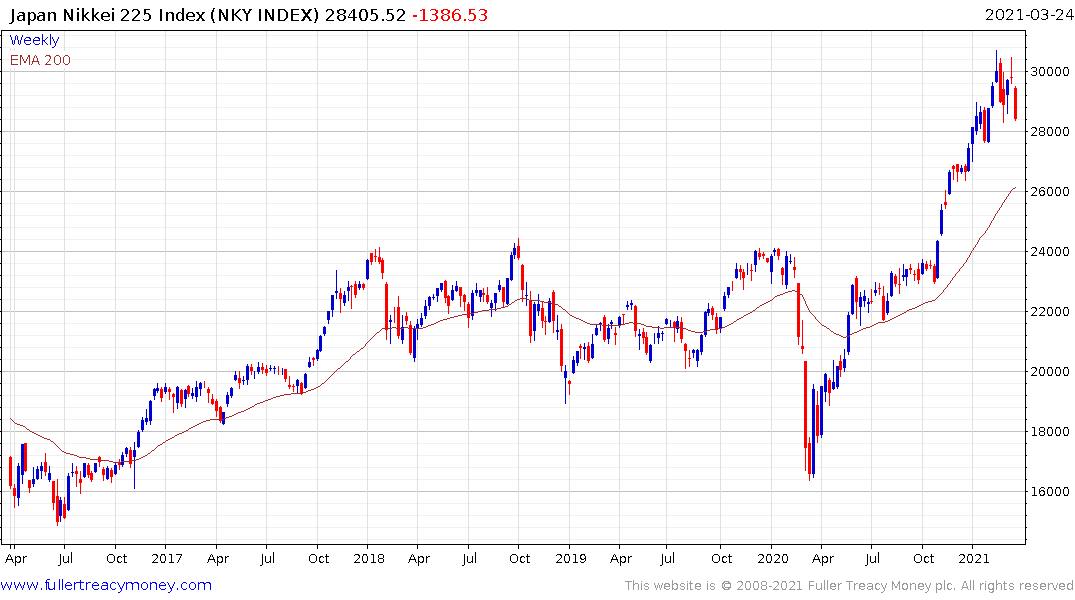 If Japan really is going to move back to an inflationary bias, companies will regain pricing power. The stock market is currently overextended relative to the trend mean but a sustained move below 24,000 on the Nikkei-225 would be required to question the recovery. 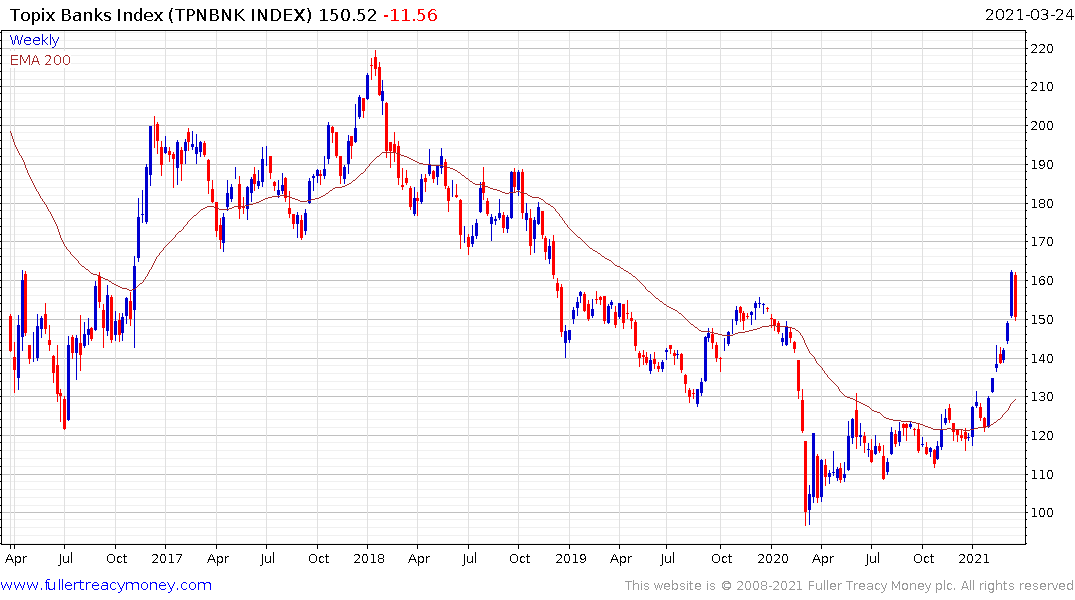 The Topix Banks Index is now unwinding its overbought condition but banks are well positioned to prosper in a steepening yield curve environment. That suggests any additional weakness will present an entry opportunity. The biggest question is whether the Yen will need to be hedged in a manner similar to what prevailed in 2012/13.