In order to gain access to the S&P Pan Asia Dividend Aristocrats a company must increase its dividend for at least 7 consecutive years. S&P made constituents of the Index freely available until 2011 but then decided to make them proprietary. As a result in reviews of the sector over the last few years I have been limited to using out of date information. Happily, S&P have changed their policy and the constituent data is available once more.

The Index still has 57 members but there have been 31 changes. The number of Australian and Indian companies has decreased while the Japanese and Chinese weightings have increased. The Philippines and Indonesia are no longer represented while South Korea only has only member.

The performance of the Index is quite different from either the US or European equivalents; highlighting the more difficult trading environment evident in Asia over much of the last 18 months; with the exception of Japan last year. 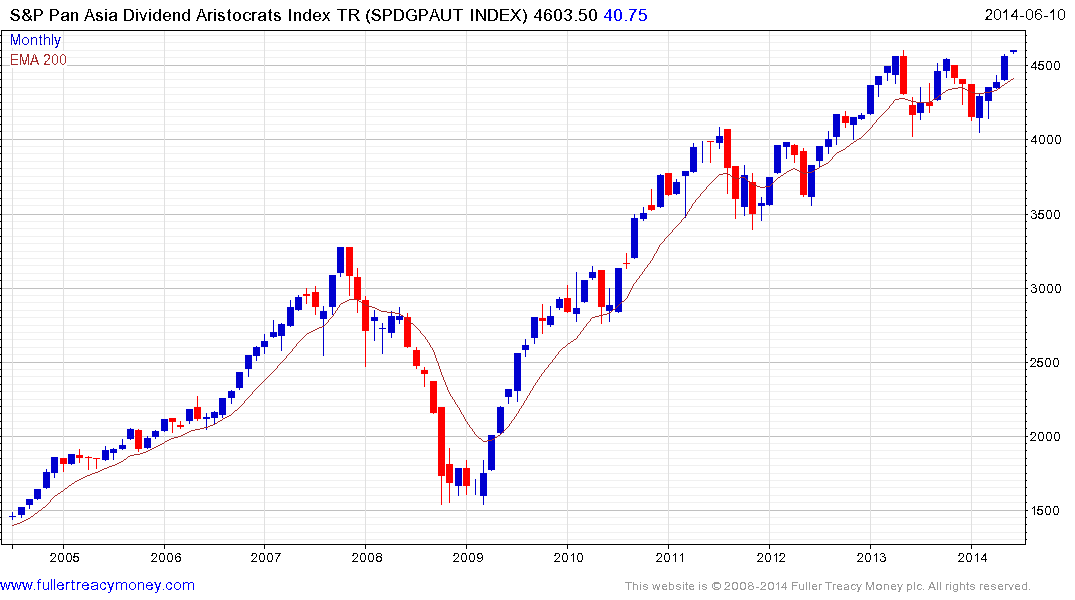 The Total Return Index surpassed its 2007 peak by September 2010 as Asia bounced back from the contagion it experienced during the credit crisis. The pace of the advance moderated from early 2011 and two large ranges are evident, positioned one above another. The Index hit a new all-time high this week but a sustained move above 4600 will be required to complete the most recent medium-term congestion area and reassert demand dominance.

Some of the more interesting charts include: 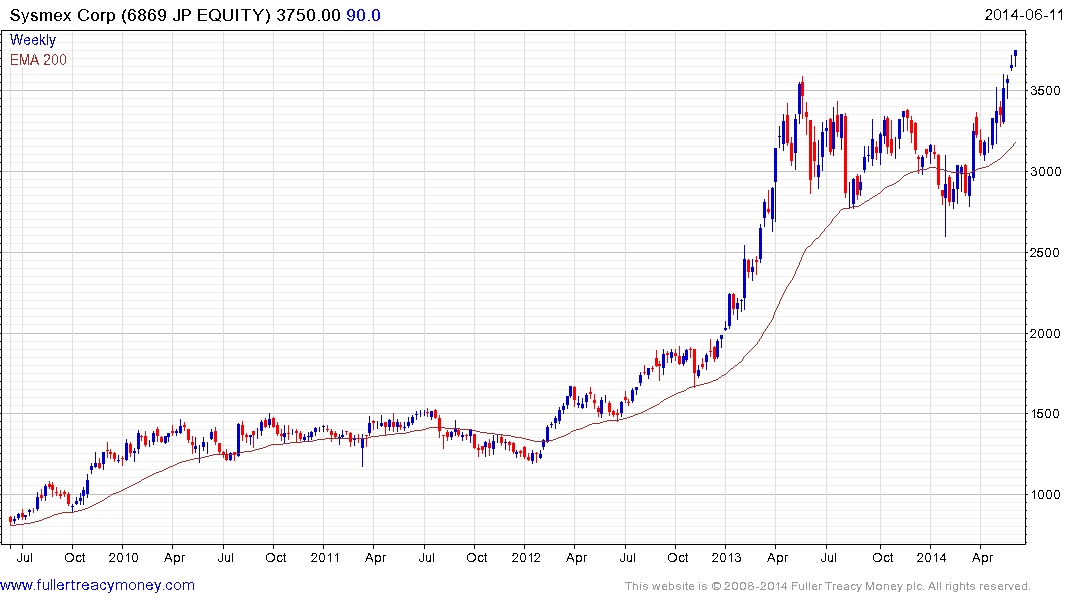 A number of the Japanese constituents represent leadership in their domestic market and have been hitting new highs. Sysmex Corp is an example and continues to extend its breakout from a yearlong range. 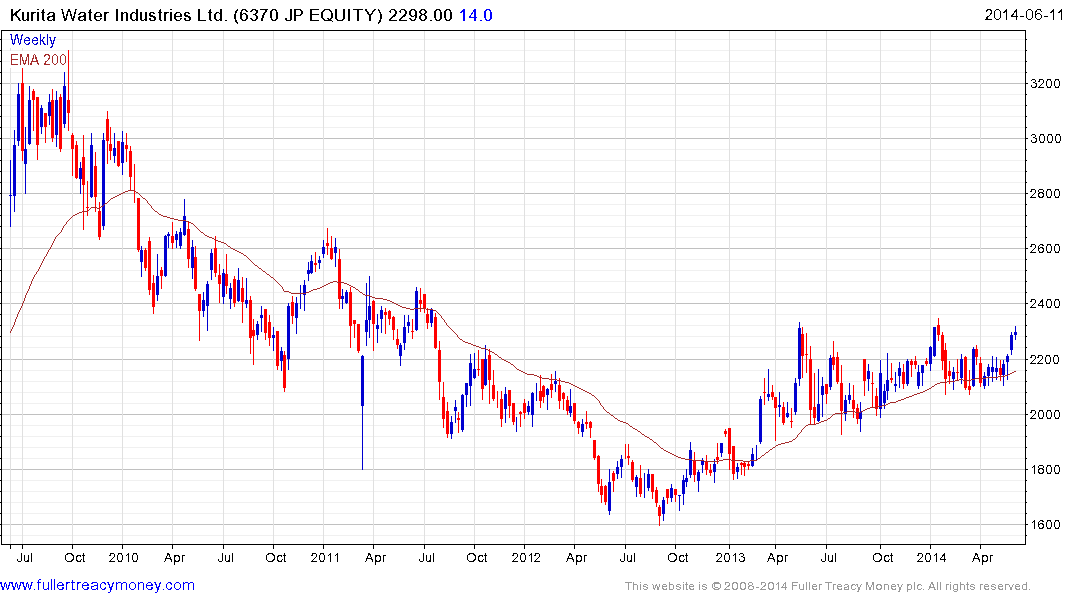 Kurita Water, in the pollution control sector, is testing the upper side of first step above its type-2 base as taught at The Chart Seminar. 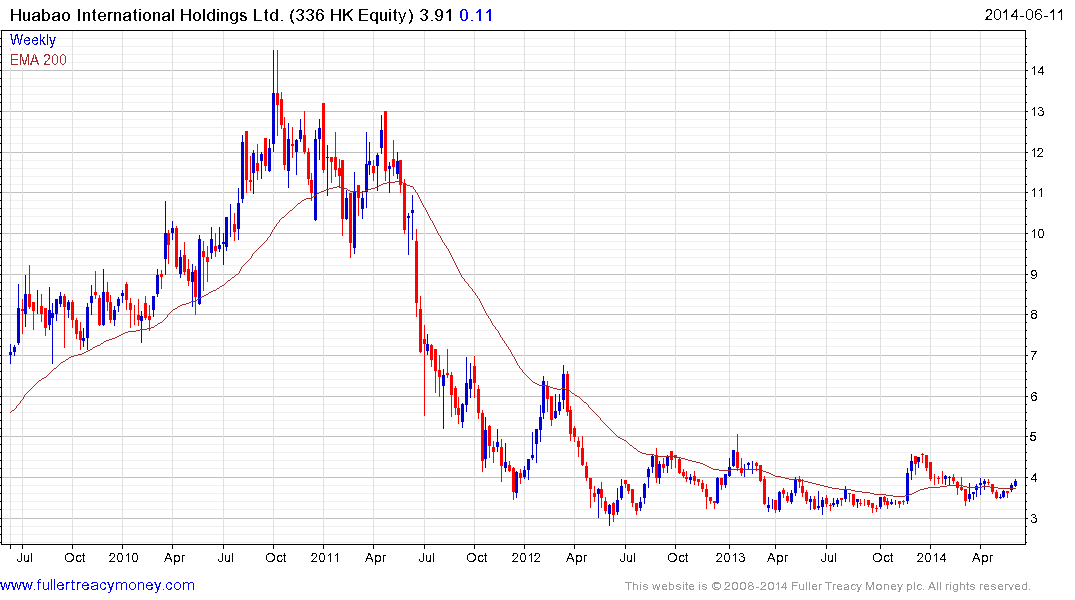 Hong Kong listed Huabao International Holdings is one of China’s more significant ingredient and flavourings manufacturers. The share continues to form a base above HK$3 and has exhibited a mild upward bias since September. In common with a large number of companies focused on mainland China, the company’s valuations are attractive with an Estimated P/E of 6.52 and dividend yield of 4.62%. 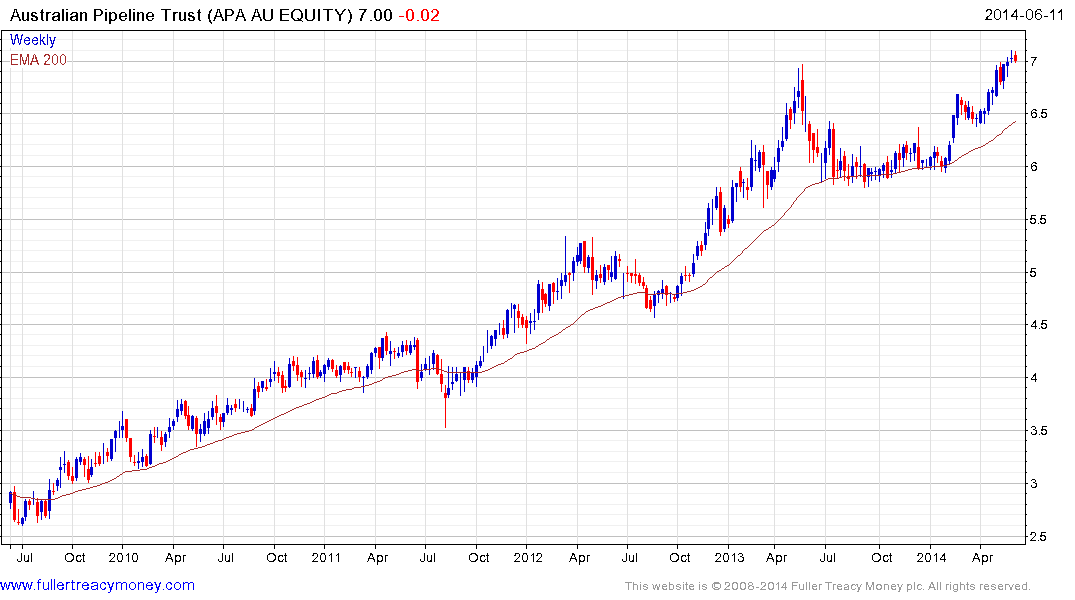 Australian Pipeline Trust as a natural gas pipeline operator with some of the same characteristics as a number of the USA’s master limited partnerships reviewed yesterday. The share continues to find support in the region of the 200-day MA on reactions and a sustained move below A$6.50 would be required to question the consistency of the medium-term uptrend. 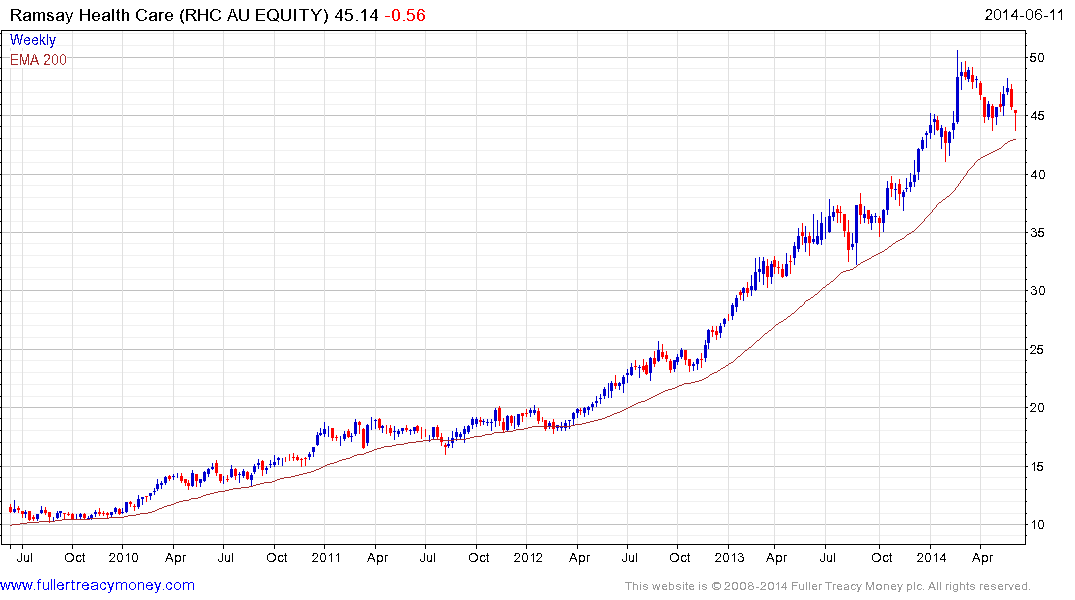 Ramsay Health Care has lost momentum somewhat since hitting a medium-term peak in February. It found at least short-term support in the region of the 200-day MA this week and will need to continue to hold above A$43 if the benefit of the doubt is to continue to be given to the medium-term uptrend. 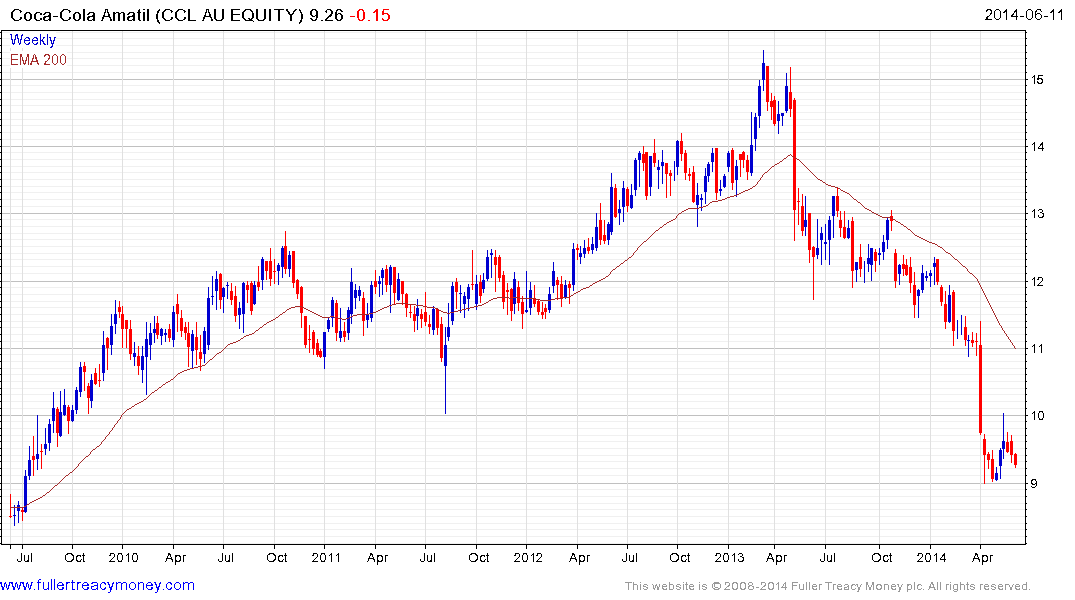 Coca Cola Amatil failed to sustain its breakout to new highs early last year and has trended lower since. Following a steep acceleration in April and subsequent bounce, it is now pulling back to test the May lows. It will need to at least hold above or in the region of A$9 to begin to challenge the overall downward bias. 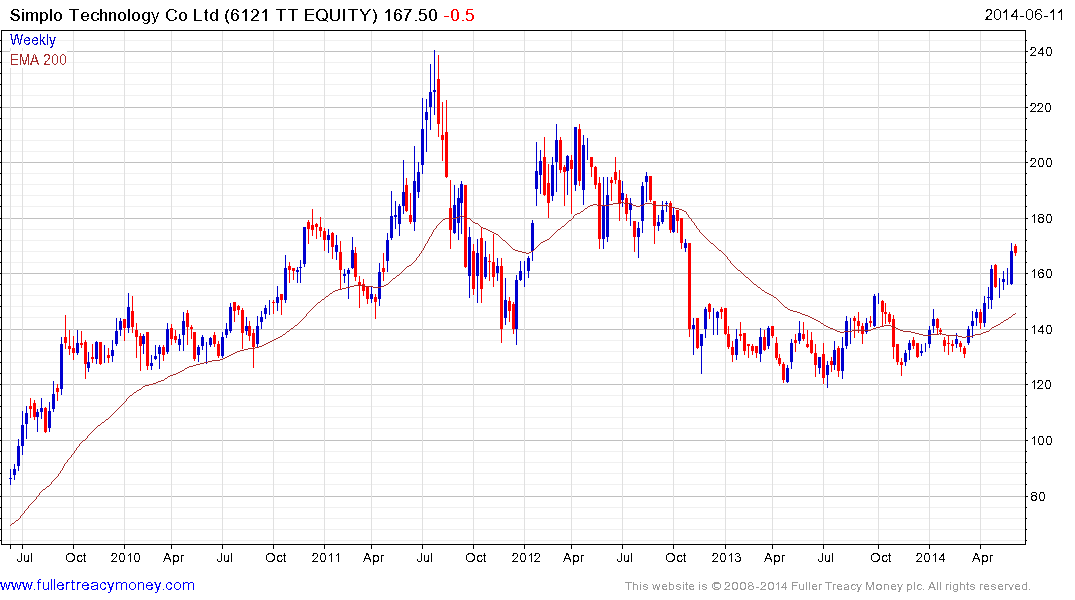 Taiwan listed Simplo Technology completed a more than yearlong base in April and continues to extend the breakout. The company manufactures lithium ion batteries for customers such as Apple, Samsung, HP and Microsoft. 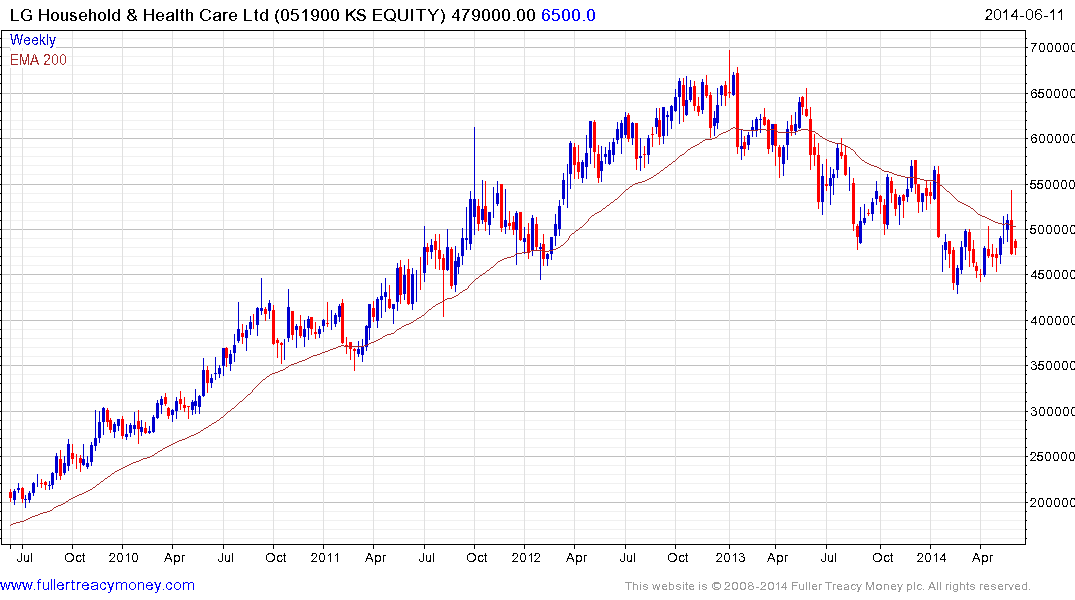 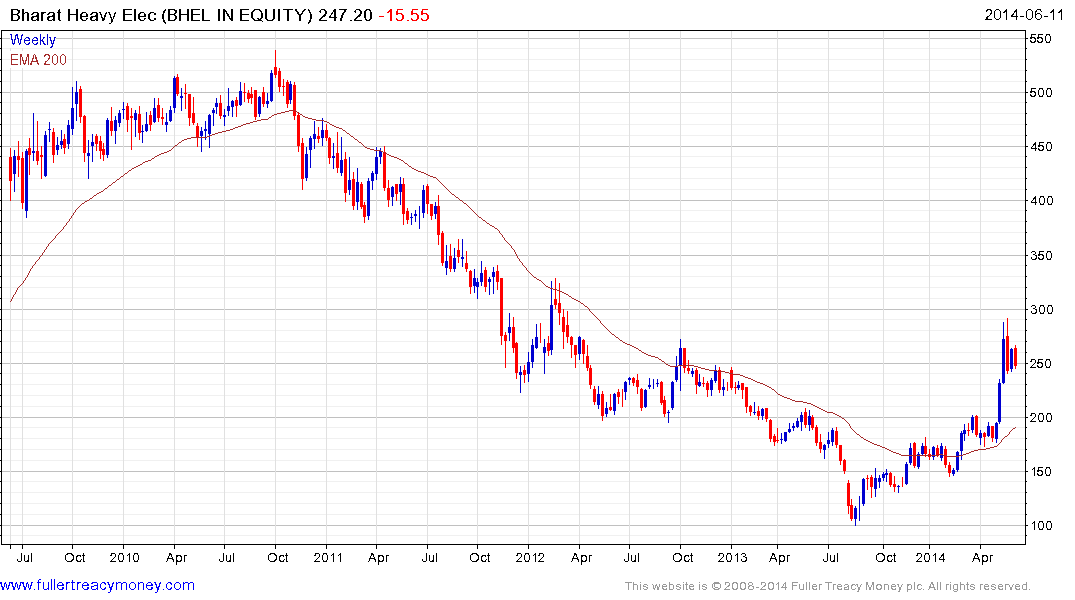 India listed Bharat Heavy has held a progression of higher reaction lows since September and broke the three-year downtrend in March. It surged on the election result and some additional consolidation looks likely. However, a sustained move below INR200 would be required to question medium-term recovery potential. 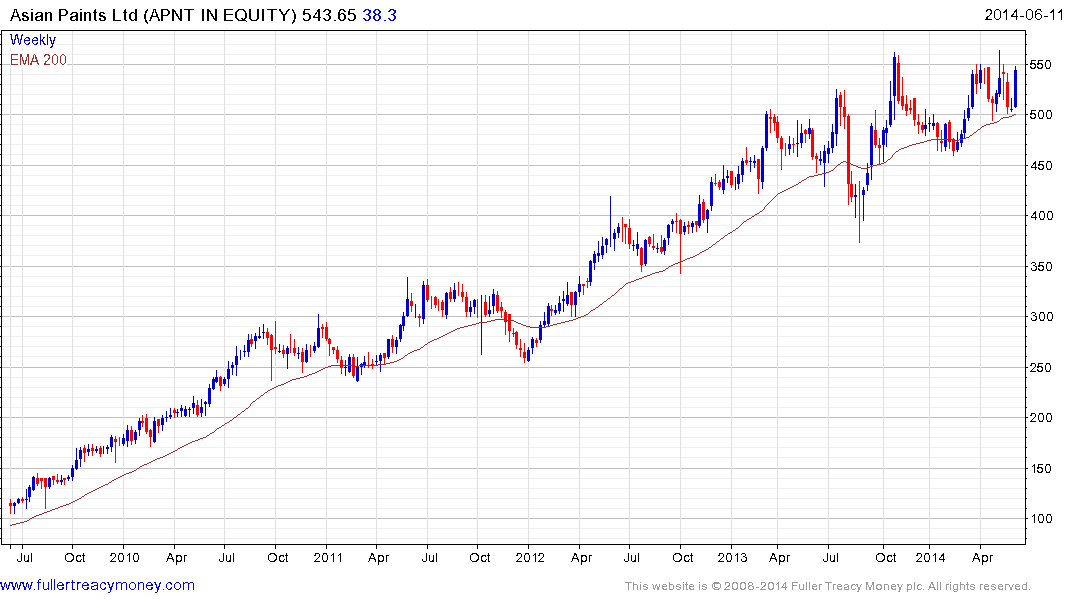 Asian Paints continues to find support in the region of the 200-day MA on pullbacks. A sustained move below INR500 would be required to question medium-term scope for additional upside. 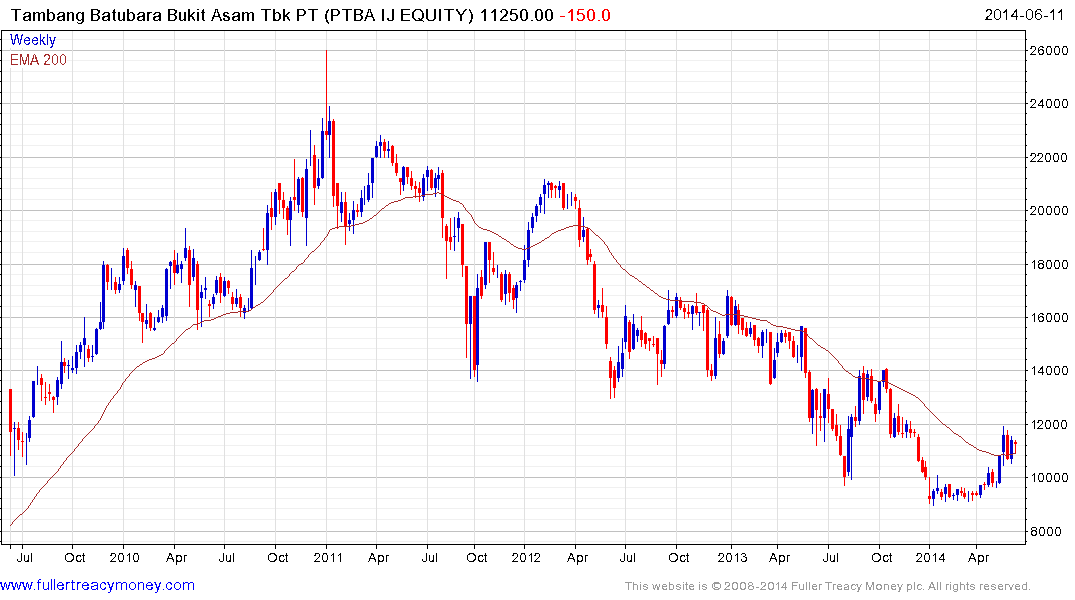 Indonesian coal miner Tambang Batubara found support least week in the region of the 200-day MA for the first time in three years. Provided it holds the recent low we can conclude that the downtrend has been broken.