We agree that the market is fixing itself. The headline on our presentation that we bring to customer meetings has since the start of this year been “Non-OPEC to painfully balance the market by moving from record growth in 2014 to production declines in 2016.” We still believe this is the correct way of looking at this market and we never factored in any production limiting help from OPEC in our supply-demand balance despite being bullish to oil prices since January. In our report from January 13 we forecasted Brent prices of 50 $/b for Q2 this year. This was then way above consensus as Brent then traded at 30 $/b. We argued that one can be bullish to oil prices without production limiting policies from OPEC. We are now seeing the signs that the Saudi strategy is working and it has mainly to do with swings on the supply side rather than changes to demand. We can mention that the growth in global oil supply was 2.3 million b/d in 2014 and 2.7 million b/d in 2015, but moving into Q2-2016 the growth in global oil supply (also including OPEC of course) is gone and will probably turn net negative for the rest of the year. Our own global supply-demand balance is suggesting that global oil supply will not grow in 2016, despite OPEC supply growing 0.7 million b/d. This is the key to the rebalancing.

May 2016 is the first month since December 2013 that our global supply-demand balance is in a deficit. The market has been helped to reach this deficit quicker than what we thought at the beginning of this year particularly due to large unplanned outages in Nigeria and Canada. Canada has during May lost about 0.9 million b/d in production due to the wild fires while Nigeria has lost about 0.5 million b/d due to force majure on Forcados, Escravos, Bonny Light and Qua Iboe. All but Qua Iboe has been caused by sabotage against oil facilities executed by militant groups where The Niger Delta Avengers is the most famous. Canadian production will likely be back to prior levels by July after ramp up through June, but Nigerian output will be slow to return as militants are set to continue to attack facilities through the rest of this year.

The oil market remains in a state of flux because oil producers have been forced to take a hard look at their business models. The response to low prices has been to cut investment to the bone and simply pump what is most expedient. The result is that US production has begun to decline while the Nigerian and Canadian outages have added to the near-term bullish case for oil.

It’s important to look beyond these considerations at the demand side of the story. Demand for SUVs has picked up with lower gasoline prices so it might be rash to expect that particular source of demand to decline. However the potential for electric vehicle innovation to represent a major drag on demand within the decade represents a serious challenge to the bullish oil story. When we consider the potential for energy saving technologies such as autonomous vehicles, and growth in renewables, the potential for oil prices to remain extremely volatile is now the base case. That means the most likely scenario is for lengthy ranging which will be punctuated both by impressive rallies, such as the one currently underway, and equally impressive declines when new supply hits the market amid what could be a declining demand profile.

Historically demand tends to increase in a linear fashion but the introduction of additional considerations such as unconventional supply, electric vehicles, efficient technology and alternative energy suggest the oil market will need to find an alternative source of demand if high prices are to be sustained. 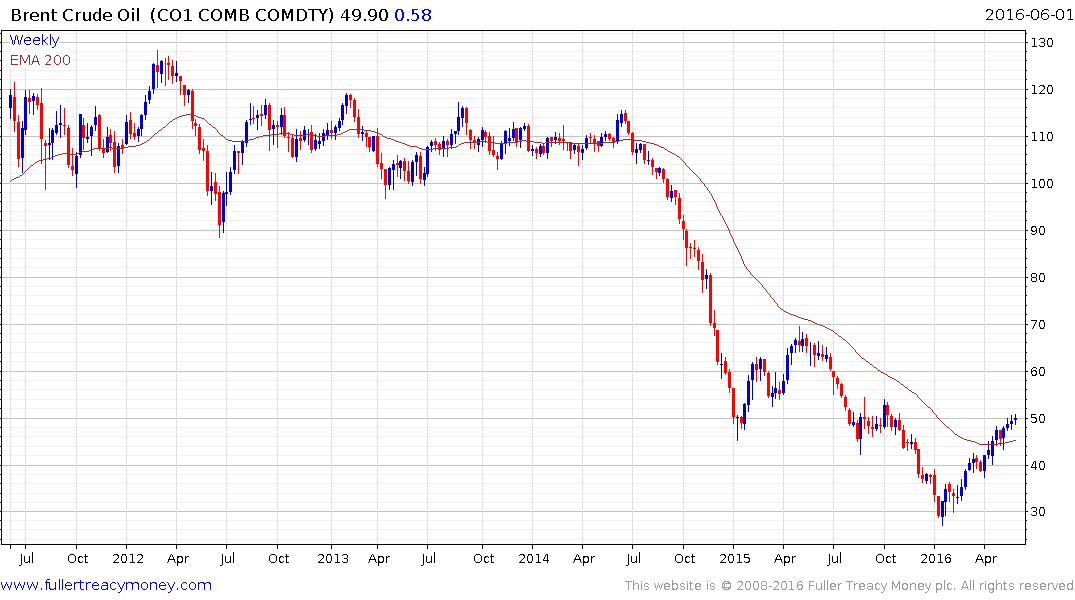 Brent Crude continues to trade in the region of $50, in what has so far been a shallow consolidation. A break in the progression of higher reaction lows, currently near $43, which would also represent a larger pullback, would signal more than temporary resistance in this area.