Dozens of gene therapies for a range of devastating illnesses are on their way. These single-dose drugs, tailored to each patient, can potentially deliver a lifetime of benefits.

But that’s reflected in their prices, which are likely to increase pressure on already stretched budgets. To make it easier for government payers to digest Zynteglo, Bluebird plans to spread out the cost over five years, with payments contingent on its success.

As a one-time therapy, Zynteglo could save governments money in the long run by cutting the need for expensive ongoing care. Treating one beta thalassemia patient today can cost as much as €60,000 a year, says Aurelio Maggio, a blood-disease specialist at the Palermo center. That’s €3 million over five decades. With multiple wonder drugs for other conditions set to reach the market soon, the upfront bill could take a heavy toll on Italy’s finances. The price tag for the therapy is twice the $900,000 that SVB Leerink analyst Mani Foroohar expected. Given the large number of patients in the country with the ailment, “the stakes are much higher,” he says.

One-shot therapies to genetic conditions represent incredibly exciting solutions to many previously untreatable diseases. The reason we are seeing the kinds of therapies appear for relatively unknown ailments is because they can get accelerated approvals from the FDA because they are treating orphan diseases. The bigger prize is to treat diseases which represent some of the biggest chronic conditions in the market today.

Diabetes and arthritis are the most profitable chronic conditions for pharmaceutical companies today because there is no cure and the cost of care ramps up over time. Therefore, each new patient represents an increasing series of cashflows that persists for years after first diagnosis. It is this trend of treating chronic conditions which has been the foundation of the pharmaceutical sector’s business model for decades. One of the primary reasons many companies are now focusing on treatments for mental conditions is because they also represent a previously unmet need and have a long tail of continuing cashflows.

The evolution of one-shot therapies has the potential to upend this business model but the broader question is how do the companies pioneering these solutions expect to make money. Selling cures rather than treatment will eventually kill off the reason for being in business in the first place. As the technology advances there is clear potential for philanthropy and government basic research to take the place of pharmaceuticals. If a solution exists then changing the pricing mechanism to ensure widespread access is likely inevitable. 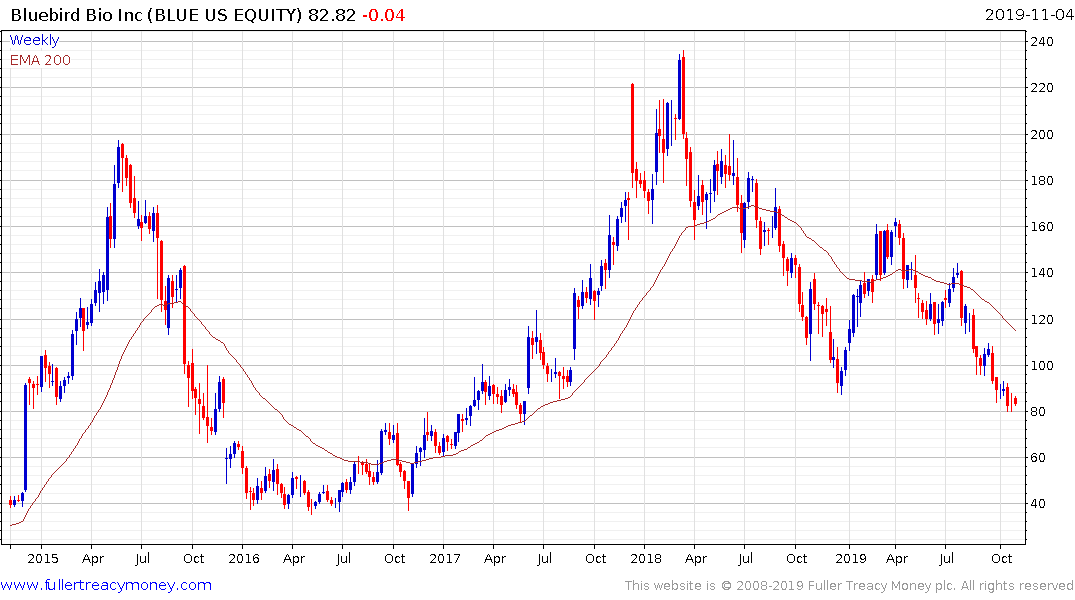 Bluebird Bio remains in a downtrend while Spark Therapeutics is in the process of being taken over by Pfizer.

The immuno-oncology sector is a variant on the one-shot model because each cancer is different from the next which requires a certain amount of customisation for each individual patient. 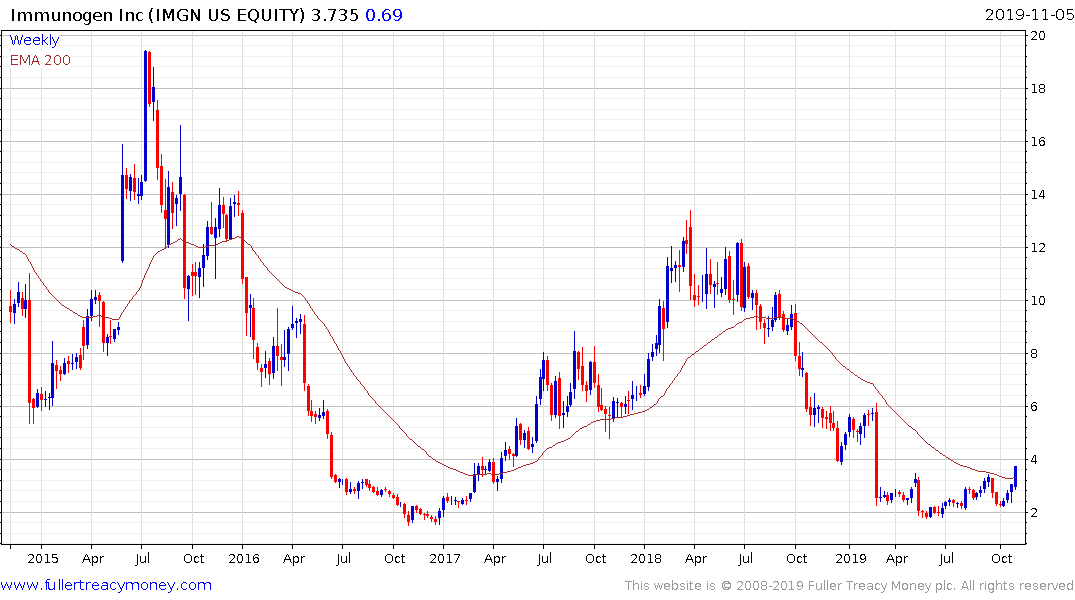 Immunogen broke out of a yearlong base today on enthusiasm it will be moving ahead with its targeted anti-cancer therapy.