I think it very doubtful that Italy will either choose to leave the Eurozone or be forced out. Britain’s tortuous Brexit negotiations have made everyone in Europe aware of the horrendous complexities of such disengagements. And the Brussels elite will go to great lengths to avoid another country exiting European membership.

They may need to do so. The new government in Rome is determined to introduce cash handouts for less-wealthy citizens, big tax cuts, and state aid for troubled banks. If investors take fright at the prospect of a spending spree in Rome, which would be a serious breach of the European Union’s fiscal rules and produce major conflict with it and the European Central Bank, that could trigger a flight out of Italian assets by both foreigners and Italians.

There would be significant risk of that ballooning into financial disaster. Italy has the biggest debt-crisis potential in Europe, with public debt of €2.3 trillion. The available lending capacity of the EU crisis rescue fund for the whole of Europe is less than €380 billion -- a panic would overwhelm the euro currency system.

Clashes over money won’t be the only source of Rome’s warfare with Brussels, Berlin and Frankfurt. Stir in a big row over forced repatriation of illegal immigrants. And possibly trouble over the union’s anti-Russian policies (which the populists oppose). It all adds up to what seems certain to be an avalanche of conflict, with the European Union seriously distracted from addressing its other major issues.

Many of those stem from the lamentable failure of European leaders to convert people to the idea of sacrificing national sovereignty to bring about strong central institutions. That’s why Europe, despite being in aggregate the world’s largest economy, has no closely co-ordinated economic policies, depends on one superpower for its defence, and depends on the other for most of its energy imports.

The European Union now appears likely to reform the immigration policy that has allowed millions of economic migrants into the region over the course of the last few years. It has taken the rise of populism in Italy and the accession of the far right leaning Alternative Fur Deutschland to the Bundestag to send a wake-up call to the status quo that the citizenry are unhappy with the course of policy.

However, dissatisfaction with immigration is but a symptom of broader issues that are assailing economies all over the world. The inequality globalisation has contributed to is increasingly becoming an election issue. While immigration is the latest expression of that dissatisfaction it is unlikely to be the last. That suggests electoral rebalancing is likely to be the rule rather than the exception for the foreseeable future. 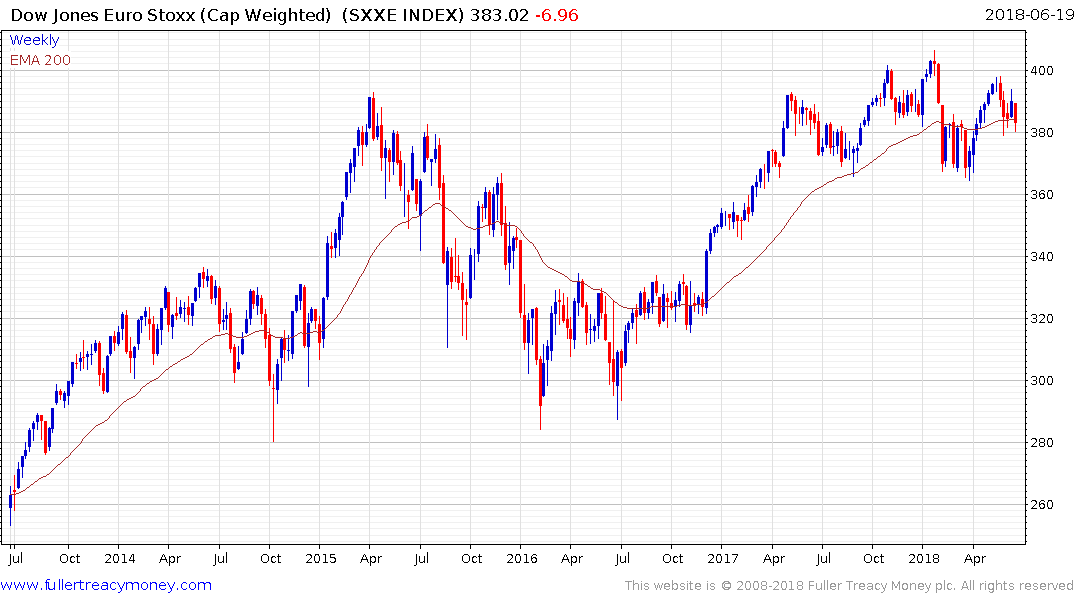 The Euro STOXX Index is back testing the region of the trend mean and will need to bounce soon if a further test of underlying trading is to be avoided. 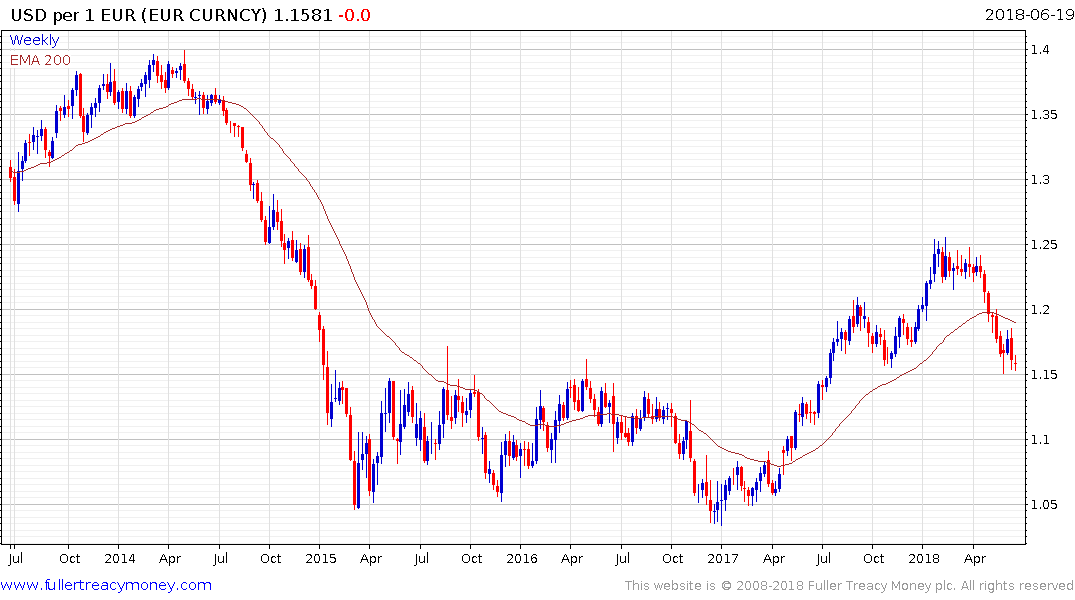 The Euro has steadied in the region of the May low following last week’s downward dynamic but a sustained move back above the trend mean is the minimum required to question supply dominance.