Central banks seem to reckon that the yellow metal is a good investment. They’re buying it for their reserves at the highest rate for almost half a century. Last year their net purchases reached $27 billion – 74 per cent more than in 2017.

Russia, Turkey and Kazakhstan were the biggest purchasers as the deteriorating political climate spurred them to convert some of their foreign reserves out of dollars. Hungary increased its bullion holdings tenfold. Even Poland is buying tons of gold.

It’s clear that the down-trend in gold prices since 2011 came to an end last year. The metal’s price has been rising steadily since mid-August. Where is it heading this year?

“The macroeconomic and geopolitical climate is conducive to continued gains in both gold and silver, and the precious metals equities,” says American stockbroker Cantor Fitzgerald, given:

Should inflation expectations rise, this typically is a very bullish leading indicator for gold and silver.

The inflection point where physical gold outflows from ETFs ceases and inflows resumed was reached in the final quarter of last year and inventory holdings have continued to climb.

Gold is one of the most popular and yet misunderstood of all alternative assets. It is commonly perceived as a hedge against inflation but also does well during periods of deflation. It is perhaps better to think of it as a hedge against stealth inflation when negative real interest rates prevail.

When we get outright inflation, we see interest rates rising in response. Gold does well for as long as it takes central banks to raise rates faster than the pace of inflation. Once positive real interest rates are achieved it acts as a headwind for all assets than do not pay a yield.

In a deflationary environment, gold experiences a reducing headwind from interest rates and therefore tends to do better.

The ideal situation for gold is when you have declining faith in the reliability of governments to protect the purchasing power of their currencies. When deficits are pursued and the value of fiat currencies are questioned that is when fears of stealth inflation predominate and gold’s limited supply becomes increasingly attractive. There is an increasingly convincing argument that we are entering just such a period now. 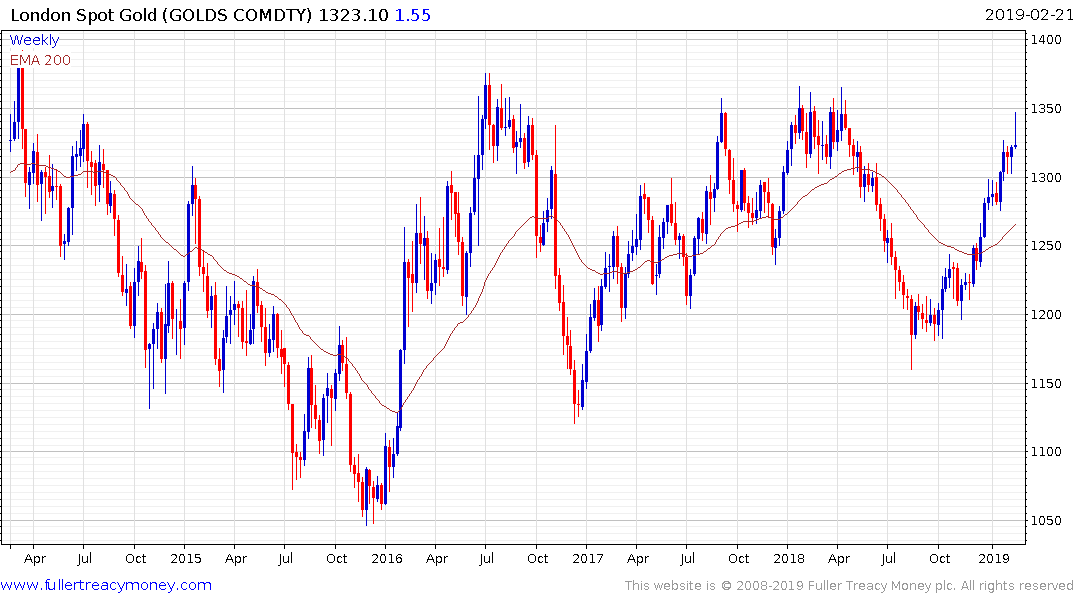 The metal pulled back today from the psychological $1350 area suggesting some consolidation is beginning.